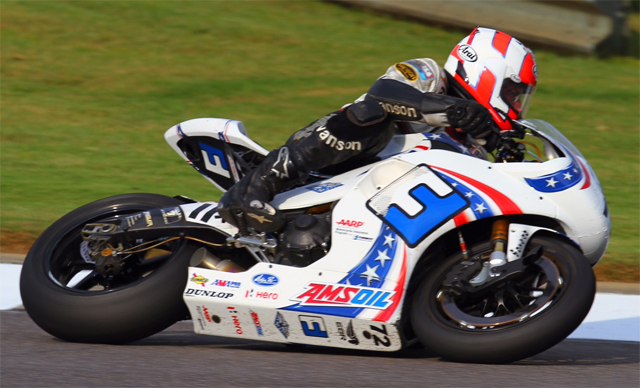 America has been on a rigorous recruitment drive in preparation for the 2016 AMCN International Island Classic historic race meeting at Phillip Island from January 22-24.

Ahead of its fourth appearance in the Mitchelton Wines International Challenge, the blue-chip event on the packed Island Classic program, America has drafted two AMA regulars into its squad: Pat Mooney and Nick Ienatsch.

American team captain Dave Crussell is thrilled with the 2016 roster.

"Every year the team has put together better bikes with stronger riders," said Crussell. "Both Pat and Nick have been top riders in the USA and now enjoy the 'gentlemen's' sport of classic racing in a similar way to the other teams at the Island Classic.

"I think they will be up there, but we also have some regulars on new faster better performing bikes. Our team is dominated by either XR69 replicas or Yamaha TZ750s and, thanks to one of our sponsors, many of our top bikes have frames built by CMR Racing.

"We have significantly closed the equipment gap to the other teams. We have four bikes with FJ engines, which have proven to be very competitive in the UK team. We worked with an engine tuner, Larry Cook, who has developed many vehicles around this engine for road and drag racing."

Crussell was the top rider for America in 2015 and finished 11th overall in the Ken Wootton Perpetual Trophy, and he'll ride a CMR TZ750 in 2016. The balance of the eleven-rider American squad, which will be trimmed to eight for the four six-lap International Challenge races include Dave Moss (CMR TZ750), Ralph Hudson (CMR FJ1200), Joe Weir (CMR Suzuki XR69), Jon Munns (CMR Yamaha FJ1300) and Eirik Nielsen (CMR FJ1300), with Carry Andrews the 'outsider' on a Kawasaki Z1000. Roger Baker (Z1000), David Hirsch (GS750), Mike Studzinski (TZ750) and Scott Rehl (TZ750) are also flying the star spangled banner for the US.

"Most of the guys on our team race at meetings throughout the USA, we are all regular racers," continued Crussell. "However, the bikes we race at Phillip Island are unique for the event, as they do not fit cleanly into the US class structure.

"In total, we have 14 riders coming down with bikes for the International Challenge and other events, and this will be the first Phillip Island outing event for six of them. I am sure they will be addicted like the rest of us after their trip."

In the 2015 International Challenge, America was third behind the UK and Australia, with New Zealand in fourth. With that rock-solid foundation, Crussell is expecting yet more improvement.

"The Aussie and UK teams are incredibly strong, and I am sure the New Zealand team will come back harder this year," Crussell said. "We will be pushing hard, hoping to stay in front of New Zealand and newcomer Ireland, but also closing the gap to the Aussies and Pommes. Luck can also play a part, as one DNF can put a rider out of the points."

The packed Island Classic schedule also includes races for motorcycles and sidecars from 1919 to 1990, across a range of capacities.

For tickets and camping for the 23rd AMCN International Island Classic, visit www.islandclassic.com.au or call the circuit on (03) 5952 2710 on weekdays.