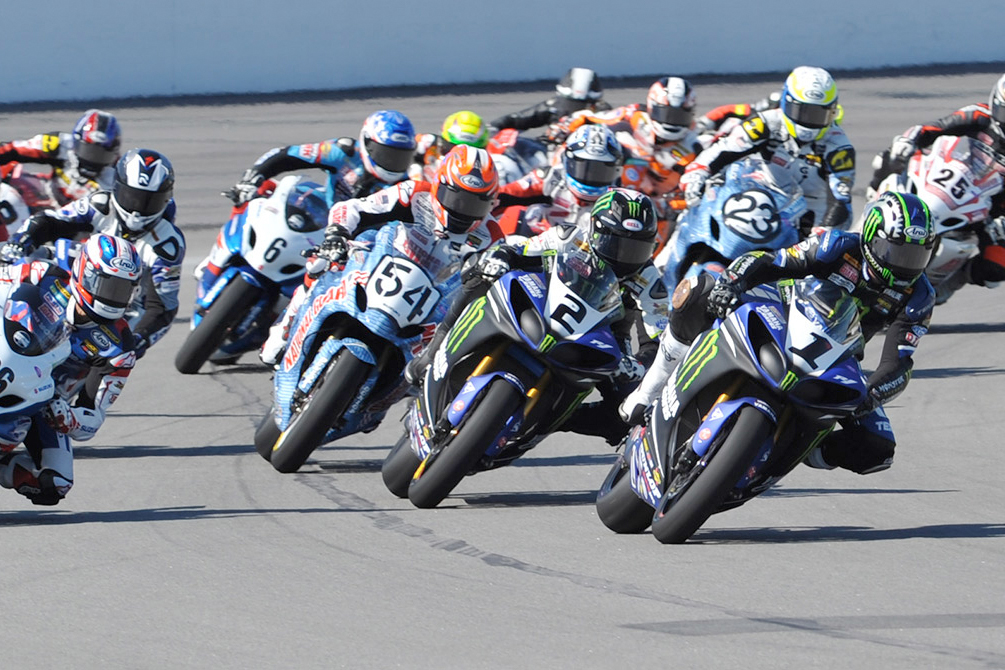 There's an old AMA Pro Road Racing adage that cautions while you can't win the title at Daytona, you can lose it there.

In 2013, Josh Hayes (No. 4 Monster Energy Graves Yamaha YZF-R1) did his best to prove that particular pearl of racing wisdom wrong, but even the three-time AMA Pro SuperBike king was unable to overcome this fate following a dreadful opener at the fabled Daytona International Speedway.

The Mississippian concluded last season's opening SuperBike doubleheader with a pair of DNFs, twice suffering mechanical issues while leading the race. As a result, he left Daytona in 18th position, 48 points out of first.

The Yamaha ace regrouped and battled his way back to the front of the pack on the strength of eight victories (two more than the rest of the field combined) and a season sweep of pole positions. However, that early misfortune left him precious little room for error and ultimately played an overwhelming role in preventing him from securing a record-breaking fourth consecutive title.

Hayes' former teammate, Josh Herrin, seized the opportunity and didn't look back, parlaying his breakthrough season into an entry in the 2014 Moto2 World Championship.

Following the upset defeat, Hayes will brandish the No. 4 plate in 2014 after three years of running No. 1. As a result of last year's failure, this year's Daytona opener looms especially for Hayes and crew as they seek both revenge and redemption. With Herrin out of the picture, expect the 38-year-old to evenly dole out an offseason of frustration on the entire field as he looks to cement his position as the premier class' dominant figure.

Hayes' numbers are undeniable. In the SuperBike class alone he now boasts 41 career victories, 30 pole positions, and three titles. And while he stands as a heavy favorite, even in the absence of its reigning champion, the SuperBike class of 2014 offers a number of worthy challengers besides Hayes to fill the vacated throne.

Colombian Cardenas is a proven champion, having earned a pair of AMA Pro GoPro Daytona SportBike crowns to go along with his earlier Spanish and Latin American Supersport championships. Last season, his second in SuperBike and first with Yoshimura, saw Cardenas step up and fight for the title right to the very end. He won two races, including one at Daytona, and scooped up 11 podium placements en route to a close third-place ranking. He should only improve in 2014.

Similarly, Hayden looks to pose a very big threat to Hayes' quest for a fourth triumph. A former AMA Pro Supersport king and SuperBike race winner himself, the Kentuckian has made major strides in the premier class in each of the last three seasons. While Hayden's 2013 campaign was littered with bad luck, his outright speed was obvious, frequently pushing into Hayes' territory.

Hayden has been presented with his best shot to date, as he's finally teamed up with the Yoshimura outfit that strung together seven straight titles from '03-'09, and took 10 of 11 from '99-'09.

This year sees another equipment swap for five-time SuperBike race winner Pegram. Following recent tours on Ducati, BMW, and Yamaha-based SuperBike machinery, 'the Worm' will look to take his No. 72 EBR 1190RS to the front this season.

Hayes' biggest challenge, however, might just come from the racing prodigy who is taking over for exiting champ Herrin on the second works Yamaha. Cameron Beaubier (No. 2 Monster Energy Graves Yamaha YZF-R1)took the SportBike class by storm last season, powering to the title with 12 victories in 13 attempts.

The 21-year-old Beaubier brings his mechanical precision and studied racecraft up to the premier class this season. Despite his rookie status, even the most established SuperBike heroes expect the gifted youngster to provide an immediate challenge.

The remainder of the field is loaded with talent and diversity. Eight different makes are represented in the field with a host of AMA Pro Road Racing race winners guiding them.

Chris Fillmore (No. 11 KTM/HMC Racing KTM RC8R)returns to front the official KTM effort, which has flashed major league potential in the past. Never was that more evident than in the 2013 season finale at Mazda Raceway Laguna Seca, in which Fillmore appeared set to score a first-ever AMA Pro SuperBike podium for both himself and the KTM RC8R -- that is until he cruelly ran short of fuel exiting the race's final corner.

Cory West (No. 13 Team AMSOIL Hero EBR 1190RS) steps up to the Team AMSOIL Hero EBR 1190RS this season after contesting aboard a satellite Motosport.com/EBR II machine last year. Fillmore's poor luck at Laguna Seca was West's gain, as he piloted his EBR to a strong fourth-place run. The Arkansas resident will carry that momentum and confidence into this year's Daytona opener.

The stars of the AMA Pro SuperBike class will officially kick the 2014 AMA Pro Road Racing season off on Thursday, March 13 with their 10:15 a.m. EST first practice.

Friday's 15-lap final will take place at 4:00 p.m. local time with Saturday's contest getting underway at 11:00 a.m. to complete the season-opening doubleheader.

FansChoice.tv will be the official home for live streaming coverage of AMA Pro Road Racing and AMA Pro Flat Track events in 2014.