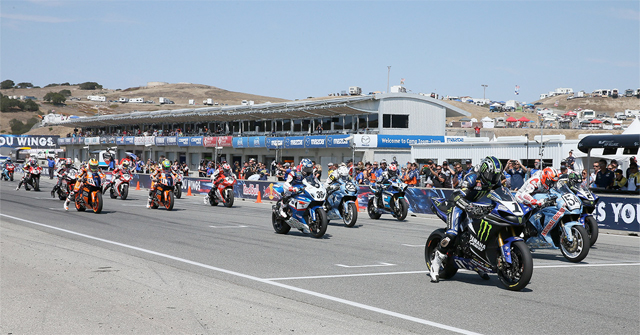 As AMA Pro Road Racing kicks off its season this week at the celebrated DAYTONA 200, Mazda Raceway Laguna Seca has announced that the Series has been added to the schedule of the eni FIM Superbike World Championship, GEICO Motorcycle U.S. Round, July 11-13.

"Mazda Raceway Laguna Seca is a legendary circuit rich in motorcycle racing history and we're proud to be returning in 2014," said Michael Gentry, chief operating officer of AMA Pro Racing. "The racing is always spectacular and our teams and riders look forward to heading West in July to entertain the fans once again."

"We have a partnership with AMA Pro Road Racing that dates back to 1976," added Gill Campbell, CEO/general manager of Mazda Raceway Laguna Seca. "We want to feature the best of American motorcycle racing."

Herrin has moved on to Moto2 this year, leaving Hayes to vie for the top spot again against a strong group of contenders including Martin Cardenas, Roger Hayden and Larry Pegram.