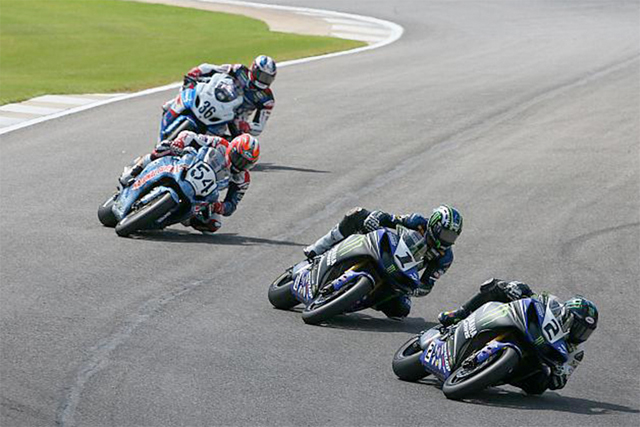 The Gulfport, native has effectively filled the early-season hole he faced following a pair of mechanical retirements at Daytona International Speedway thanks to two consecutive perfect points haul weekends, racking up career SuperBike victories 34, 35, 36, and 37 at Road America and Barber Motorsports Park.

As a result, Hayes is poised to take command of the points chase this weekend should he assemble another flawless weekend. The Yamaha ace currently trails Martin Cardenas (No. 36 Yoshimura Suzuki Factory Racing Suzuki GSX-R1000) by just 10 points (144-133) and can guarantee that he picks up at least 13 more points than any of his rivals by once again winning pole, leading the most laps in both races, and claiming the double victory.

Hayes has not only accomplished that feat at the last two events (and showcased the ability to do so at Daytona as well if not for his misfortune), he also pulled it off at Mid-Ohio one year ago.

That said, each and every one of those weekends saw Hayes pushed to the brink. The double digit-second margins of victory that defined the 2012 season appear to becoming a thing of the past.

Before pulling out at Daytona, Hayes was hounded both by Cardenas and teammate Josh Herrin (No. 2 Monster Energy Graves Yamaha YZF-R1), who ultimately split the spoils in Hayes' absence. At Road America, Colombian Cardenas once again kept the champ honest. And last time out at Barber Motorsports Park, Hayes was under threat on the final lap of both contests by a very hungry Roger Hayden (No. 54 National Guard Jordan Suzuki GSX-R1000).

In fact, Hayden may be the man to keep an out for this weekend. In 2011 at Mid-Ohio, Hayden beat Hayes to the stripe to claim third -- his first-career AMA Pro National Guard SuperBike podium finish. And last year in Lexington, Hayden waged a memorable battle with Hayes for the win, taking the lead momentarily on the race's final lap before Hayes reclaimed first and won out to the checkered flag by a mere 0.224 seconds.

Hayden has a history of slow starts to his SuperBike title campaigns but once he picks up momentum, he's arguably the rider most capable of challenging Hayes in a straight fight. And if his Barber Motorsports Park form was any indication, Hayden appears to have hit that groove a bit earlier than usual this year.

Hayden is currently fourth in the points with 107 (Herrin is third at 131), but as Hayes has already shown this season, consistent excellence allows a rider to make up big chunks in short order.

Herrin could be in line for a big weekend as well. The youngster has recently taken one step back in order to take two forward, focusing on improving his clear track pace while building a stronger SuperBike foundation upon his prodigious skills.

As a result, Herrin impressed while running in the lead in Birmingham after appearing to be far off the pace prior to the race. And Herrin was able to cling on to the front in the opening half of both races at Mid-Ohio last season, finishing third on Sunday to make up for a Saturday crash that came after he pushed his teammate for the lead.

Cardenas, meanwhile, will be fighting hard to fend off the Hayes freight train and leave Ohio with his diminished SuperBike points lead intact. The Suzuki star has a relatively strong record at Mid-Ohio, including a pair of top fives as a premier-class rookie in 2011.

However, the track stands as the only circuit on this season's calendar (excluding Harley-Davidson-exclusive Indianapolis Motor Speedway) that he has yet to conquer in any class (incidentally, Cardenas owns wins at five tracks not included on this year's schedule). A victory this weekend would not only do wonders for his '13 title hopes but also represent something of a milestone for his remarkable AMA Pro career.

Larry Pegram (No. 72 Pegram Racing Yamaha YZF-R1) trails Hayden by just a single point in fifth. The Ohioan will be motivated to perform well in front of his home crowd, particularly as he's aboard the most competitive machinery he's had access to in some time heading to Mid-Ohio. Since switching to Yamaha equipment, Pegram has registered four top fives in six starts with no finishes worse than sixth.

Chris Fillmore (No. 11 KTM/HMC Racing KTM RC8R) came into Mid-Ohio two years ago with a massive task ahead of him. The former Supermoto standout was set to make his SuperBike debut mid-season and aboard a brand-new racebike -- the distinctive orange KTM RC8R -- which was making its first AMA Pro National Guard SuperBike appearance.

HCM Racing's faith in Fillmore paid immediate dividends as he guided the bike to a pair of top tens that weekend -- including a seventh-place run in which he battled with Cardenas and Pegram.

Unfortunately, Fillmore missed last year's trip to Mid-Ohio due to injury. He and teammate Taylor Knapp (No. 44 KTM/HMC Racing KTM RC8R) could be ready to demonstrate just how far along the bike have progressed since that head-turning entrance of 2011.

The undulating nature of the circuit should also play to the strengths of the Erik Buell Racing entries. Geoff May (No. 99 Team Hero EBR 1190RS) took a fifth and sixth at the venue a year ago while teammate, Aaron Yates (No. 20 Team AMSOIL/Hero EBR 1190RS), is an acknowledged Mid-Ohio master, having scored three SuperBike wins at the track along with four support class victories.

Two-time Daytona Pro GoPro Daytona SportBike king Danny Eslick (No. 23 Jordan Suzuki GSX-R1000) continues to adapt to the Michael Jordan Motorsports GSX-R1000. By dialing back the machine's traction control, Eslick has been better able to utilize his natural talents. He flashed front-running pace at Barber Motorsports Park, showing a front wheel to the lead group in the opening stages of Sunday's race.

Eslick's physical riding style has worked extremely well at Mid-Ohio in the past, rewarding him with a career tally of five undercard wins there.

David Anthony (No. 25 Motosport.com Motul Fly Racing Suzuki GSX-R1000) has once again proven to be a regular in the top ten, finishing tenth or better in five of six races this season.

The Australian will look to continue that streak but may very well have his hands full dealing with Chris Ulrich (No. 18 M4 SportbikeTrackGear.com Racing Honda CBR1000RR), who twice finished tenth at Mid-Ohio a year ago and has a Mid-Ohio race win to his name (750 Supersport in 2001) and Martin Cardenas' teammate, Chris Clark (No. 6 Yoshimura Suzuki Factory Racing Suzuki GSX-R1000).