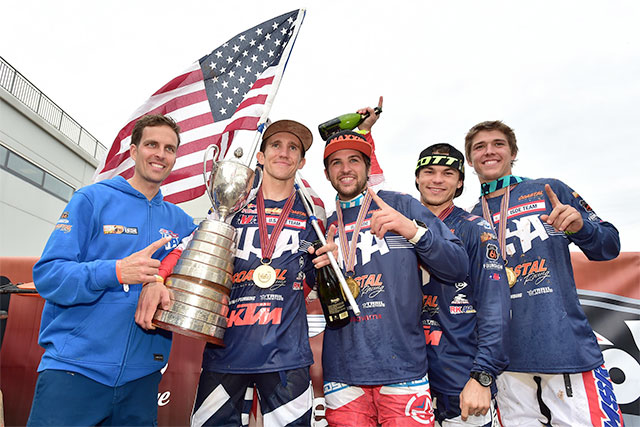 Held in Navarra, Spain, on Oct. 11-16, it was the 91st running of the ISDE since the FÌ©dÌ©ration Internationale de Motocyclisme event was founded in 1913.

"This enormous accomplishment is historic and without question one of American motorcycling's greatest competitive triumphs," said AMA President and CEO Rob Dingman. "On behalf of all AMA members, I congratulate the U.S. World Trophy Team, its support crew, sponsors and everyone who contributed to this exceptional performance."

The U.S. World Trophy Team defeated runner-up Great Britain by 3 minutes, 38.66 seconds, a lead accumulated over six days of racing. The U.S. team was led by Taylor Robert, who was the top individual rider at the event. Robert's teammates were Kailub Russell, Thad DuVall and Layne Michael.

"We finally got it done," said U.S. ISDE Team Manager Antti Kallonen. "Not only did we win the world championship, but we also won the individual overall. All of our World Trophy Team guys did exactly as we had hoped. Taylor was phenomenal winning the overall. It's just as special as last year when Ryan Sipes won the overall, except this year we also won the championship."

Robert and Russell raced KTM 350EXC-Fs in the E2 class. DuVall raced in the E3 class, and Michael competed in the E1 class. Both rode Husqvarnas.

The U.S. Junior Trophy Team of Trevor Bollinger and brothers Grant and Steward Baylor also made the podium, finishing second after working their way up from a fourth-place finish on the first day to just 45.23 seconds behind the winning Swedish team.

The United States had two teams make the podium in the club team division, which was won by an Italian team. The Trail Jesters, made up of Josh Toth, Ben Kelley and Jason Klammer, finished second, and the Eric Cleveland Memorial Team, made up of Jimmy Jarrett, Broc Hepler and Alex Dorsey, finished third in the team standings.

Toth, who competed in C1, was the top individual rider among the 381 entrants in that division, winning by more than 2 mintues. Kelley won the C2 class, and Hepler finished third in the C3 class.

This year's ISDE was the first year for the FIM Enduro Vintage Trophy. American Fred Hoess, competing on a 1986 WR250 Husqvarna, won the overall.

"I rode here in Spain in 1985 on basically the same bike as I rode this year, and I'd have to say on Day 5, when we were riding in the mountains and I'd look up at the scenery and smell the two-stroke oil and the burning clutch plates, I'd swear just for a second I was back in Spain and it was 1985 again," said Hoess, who had competed in 25 ISDEs prior to this year's special vintage competition.