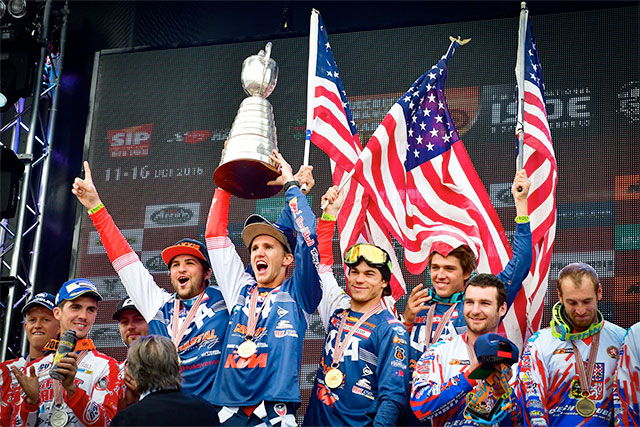 The American Motorcyclist Association has announced the 10 Trophy Team riders selected to represent the United States in the 2017 FIM International Six Days Enduro in Breive, France, on Aug. 28 through Sept. 2.

The riders will compete as the U.S. Trophy, Junior Trophy and Women's Trophy teams.

"After notching the first U.S. Trophy Team championship last year and seeing the great success of America's other teams and individual competitors at the 2016 event, we are eager to return to Europe with another group of talented riders," said AMA Director of Racing Kevin Crowther. "I am confident that these individuals will not only be competitive on a global scale, but also represent America's determination and conviction to achieve success at the highest level."

These riders will be joined by 21 Club Team riders at the ISDE.

The U.S. ISDE World and Junior Trophy Teams have been managed by KTM USA's Off-Road Manager Antti Kallonen since 2012. For 2017, Kallonen will take on the additional challenge of managing the U.S. Women's Trophy Team.

"The results of the riders in the U.S. Trophy Team and the U.S. Junior Trophy Team have been well established over the past few years, and I'm excited to take on a new challenge of the Women's team," said Kallonen. "We have formed three solid Trophy teams where our goals are simple: to win. There are no short cuts to success."

"These riders are the fastest and most experienced riders in the country," Kallonen said. "We have arrived at a level where we are no longer learning and can now focus on smaller, but important, details that can defend our World Trophy championship and bring more titles back to America."

The team's efforts would not be possible without the help of many sponsors including Coastal Racing, FMF and Bonanza Plumbing. Riders are supported by individual manufacturer and product sponsors. Direct team sponsors include: Rabaconda, Seat Concepts, Trail Jesters, Arai Helmets, Spectro, Motion Pro, Hall's Cycles and Elizabeth Scott Community.