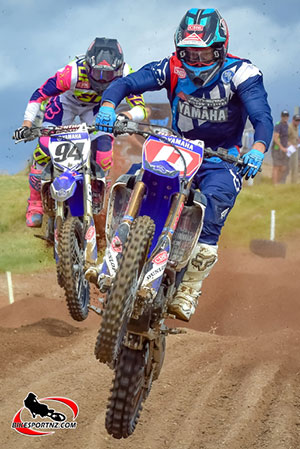 Those words probably spring to mind for Altherm JCR Yamaha Racing Team boss Josh Coppins after two of his riders finished runners-up in two separate classes as the 2017 New Zealand Motocross Championships wrapped up at the fourth and final round in Taupo on Saturday.

He was naturally disappointed to see his MX1 class star, Australian Dean Ferris, finish the series second to Cody Cooper, following on from also watching his MX2 (250cc) class contender, Dylan Walsh, end up second to Hamish Harwood in that class.

It was a frustrating finish for both Ferris and Walsh, both of them among the title favourites.

Coppins is no stranger to such emotions, having himself been unfortunate to miss out on winning the world championship crown in 2007, when he had been so dominant, until he crashed out while leading the series that year.

Of all people, Coppins knows too well that motocross can be a most brutal and unforgiving sport, but he was philosophical nonetheless as he reviewed what happened to his riders' New Zealand title bids this season.

Ferris had arrived at Taupo with a slim one-point lead over Cooper in the MX1 class and Walsh trailed Harwood by just 11 points in the MX2 division, but both the Yamaha men were beaten by their main rivals on Saturday.

Cooper strung together a hat-trick of wins, while Ferris hounded him all the way, although a mysterious electrical problem in the final race forced Ferris to withdraw and that non-finish handed Cooper a flattering final winning margin of 32 points.

In the MX2 class, Harwood finished 2-1-1 and Walsh posted a 1-2-3 score-card on Saturday and so Walsh ended the series 16 points behind Harwood, with Walsh's Altherm JCR Yamaha team-mate Ethan Martens, of Waitakere, claiming third overall.

"But I have mixed emotions, because I am proud of my riders and the crew that worked for them behind the scenes too.

"Cooper was simply the better rider today and he deserved the win. Dean (Ferris) is naturally disappointed, but his main mission here was to get prepared for his Australian nationals campaign coming up and I think that's gone according to plan.

"Dean showed good speed against the other Australian riders, men who will be his main opposition in Australia in the coming weeks. "In the MX2 class, the chance of Dylan (Walsh) winning was a bit of a long-shot really, but for Dylan and Ethan (Martens) to put the team 2-3 on the podium is pretty good going."

Coppins was also encouraged by the form shown by his team's other MX1 class rider, Kayne Lamont.

Lamont is allergic to bee stings and when he was stung in the neck early in race one at Taupo, it made his job almost impossible.

He soldiered on and, even when he began vomiting during the final race of the day, he continued to fight.

Despite the bee attack, Lamont finished 5-3-4, good enough for third overall in the MX1 class on Saturday, and he claimed sixth outright for the championship. "Kayne has shown a lot of promise for the future," said Coppins.