Allerton quickest and only 0.04 off lap record during Round 4 ASBK practice 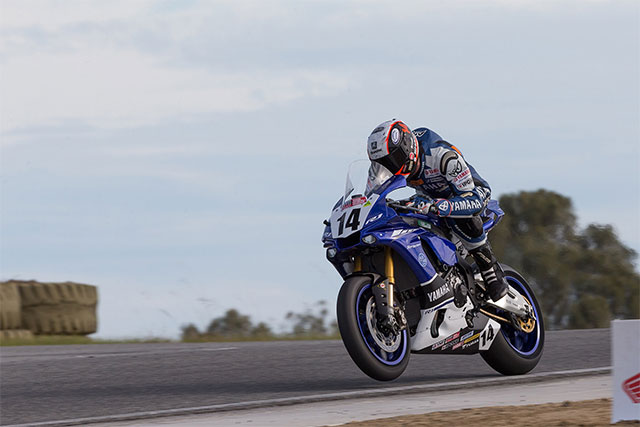 Round 4 of the 2016 Yamaha Motor Finance Australian Superbike Championship presented by Motul Pirelli officially kicked off at Barbagallo Raceway today, with riders hitting the track for practice ahead of qualifying and racing commencing tomorrow.

A total of four classes had the opportunity to lay down the rubber during three practice sessions in Western Australia today, and the times on track were fast and competitive, giving ASBK spectators a taste of what is in store at Barbagallo this weekend.

The premier Yamaha Motorcycle Insurance Superbikes took no time at all in getting to know the undulating and fast braking Barbagallo Raceway circuit, with riders showing impressive speed from the minute they hit the track.

After five laps in the first Superbike practice session this morning, it was Yamaha Racing Team‰Ûªs Glenn Allerton who emerged as the early rider to beat, posting a fast time of 56.096. However, with ten minutes remaining in the first session of the day, defending ASBK Champ (DesmoSport Ducati) shot to the top of the time sheets with a 56.083. But for Jones, his time at the top was also short lived, with Wayne Maxwell breaking into the 55‰Ûªs on lap 15 (55.889), a time which couldn‰Ûªt be matched within the first 30-minute session.

Maxwell‰Ûªs teammate and championship leader Allerton was only .113 off the top time at the conclusion of Practice 1 this morning (56.002), while Jones wrapped up the opening session with his 56.083 around the 2.411km track. Crankt Protein Honda‰Ûªs Troy Herfoss, and Cru Halliday rounded out the top five times.

When the 1000cc Superbike machines hit the track for their second practice today, it only took four laps for Ducati‰Ûªs Jones to find his feet ‰ÛÒ becoming the second rider to break in to the 55‰Ûªs with a 55:810. However, on lap 21, Superbike points leader Allerton, who also holds the lap record at Barbagallo was able to record an impressive 55:721. From there, no one was able to knock Allerton off his perch, with Jones wrapping up the session in second (55.810), followed by Maxwell (55.975), Jon Daniels Racing‰Ûªs Daniel Falzon and Crankt Protein Honda‰Ûªs Herfoss.

When the big bikes came out for the final time this afternoon, it was once again the Yamaha machine of Allerton who was unstoppable on the Western Australian circuit, posting a 55.573 time, only 0.04 shy of his lap record. In the closing stages of the session Maxwell shot to second position with a 55.667 lap time, while Jones concluded the final practice with a 55.912 handing him third.

With times combined from three practices, Yamaha mounted Allerton set the pace for the weekend with his time in the final session (55.573), while fellow Yamaha Racing Team rider Maxwell also recorded his quickest lap of the day in Practice 3 (55.667). Jones was third quickest on track today (55.810), while Ben Burke (55.940) and Herfoss (55.958) completed the top five combined times.

A total of 16 Motul Supersport riders took to the track for their first practice session at Barbagallo this morning, and within five minutes of being out on track, Championship leader Troy Guenther (Graffiti Alley Racing) recorded a time of 58.290, which couldn‰Ûªt be topped within the 30-minute session. Only slightly off Guenther‰Ûªs pace was WA local rider Sam Clarke, who wrapped up the first session with a 58.469, while Cube Racing‰Ûªs Callum Spriggs was third quickest on track with a 58.797.

When the second practice for the Motul Supersport class kicked off, competitors were welcomed with warmer track conditions, and it was Banham WA Racing‰Ûªs Clarke who burst out of the box to set the fastest time (57.634) from Guenther who late in the session posted a 58.206, placing him in second ‰ÛÒ The third quickest time in Practice 2 was snatched up by JNL Racing‰Ûªs Luke Mitchell, while Spriggs and Chris Quinn completed the top five times.

In the third and final practice session for the Motul Supersport category this afternoon, Guenther launched on to the track setting a lightening fast 58.189 on lap two, but by the halfway mark in the session, local man Clarke once again made his way to the top, putting down a 57.742 which couldn‰Ûªt be matched for the remainder of the session.

When times from all three practices were combined, it was Clarke‰Ûªs 57.635 lap in Practice 2 which saw him finish quickest throughout today‰Ûªs sessions, while Guenther bettered his times in the final practice (58.189) placing him in second. Mitchell, Spriggs and Quinn were all separated by the narrowest of margins (.482) and completed the top five combined times.

The Honda Moto 3/125GP class competitors relished in the fresh track conditions at Barbagallo this morning, and it was the most experienced rider out on track Brian Houghton who was fastest with a 1:03.556 time, while rival 14-year-old Locky Taylor put down a 1:04.606.

In the second practice session for the Honda Moto 3/125GP class, once again Houghton asserted his authority, improving on this morning‰Ûªs time to drop .551 of a second (1:03.005). Following Houghton‰Ûªs lead and despite a minor crash during the session, was Scott Pettit with a 1:03.353 lap, followed by David Doughty who wrapped up the second free practice third fastest on track.

In the final practice, there was plenty of excitement with the session red flagged twice to clear small crashes ‰ÛÒ However when the third practice resumed, Houghton once again couldn‰Ûªt be beaten, and when the times from all three sessions were combined Houghton remained in the top spot with a 1:03.005 lap time from Practice 2, from Pettit (1:03.353) and Doughty (1:03.512).

In the second practice session for the Production Class, YRD‰Ûªs Callum Alderson improved on this morning‰Ûªs times, recording a 1:07.615 lap handing him the top spot. However, with just over six minutes to go, the session was prematurely red flagged due to a rider running off at turn one. When the session resumed, despite the efforts of his competitors, no one was able to get close to Alderson‰Ûªs 1:07.615 time, with Demmery (1:08.012) and Sells (1:08.372) each wrapping up the second practice with the second and third quickest times on track respectively.

In the final practice session for the day it was once again Alderson who showcased his consistency in the Over 300 Production category, bettering his times and recording a 1:06.902 lap ahead of Demmery who snatched up a 1:07.643. Reid Battye topped the times in the Up to 300 Production class with a 1:07.648, followed by Sells and Sam Condon who completed the top five combined fastest laps.

With ASBK practice sessions done and dusted, competitors and teams will now prepare for qualifying and racing at Round 4 of the 2016 Yamaha Motor Finance Australian Superbike Championship presented by Motul Pirelli at Barbagallo Raceway, which kicks off tomorrow.