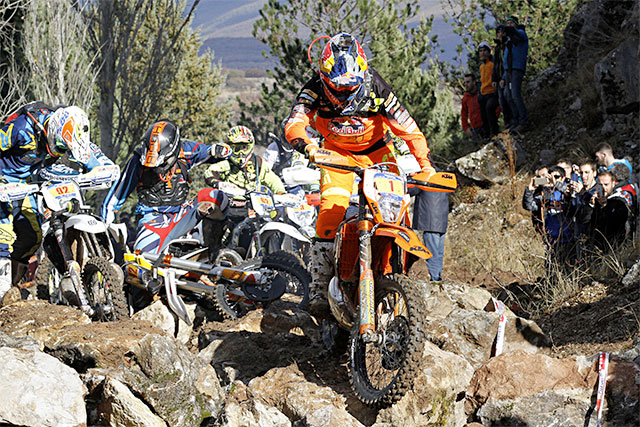 Red Bull KTM rider Alfredo Gomez wrapped up a strong weekend of racing with a win in the Hixpania Hard Enduro, a 2.5-hour, multi-lap race set in and around a quarry in northern Spain.

It was a satisfying victory for Gomez in front of his home crowd and he finished ahead of perennial rival, British veteran Graham Jarvis. Mario Roman of Spain finished third ahead of a field of mostly Spanish riders.

Gomez was also second behind Jarvis in Friday‰Ûªs nighttime city prologue, a great favorite with the spectators. He followed this up on Saturday with another second in the 60 km Enduro around the lake. But he saved the best till last to take the win in the main event in this inaugural race, new to the Hard Enduro calendar. The top 40 competitors from Saturday‰Ûªs race qualified for Sunday‰Ûªs main event.

Riders kicked off their challenge on Sunday with a Le Mans style start, where they had to run to retrieve their bikes, parked in a cave. Gomez got away cleanly in about fifth place on his KTM 300 EXC but already managed to pass several other riders on the first daunting rock climb that took riders up the slope of the quarry. They then had to tackle a 15-minute long Extreme Enduro loop around the remainder of the quarry and surrounding forests. Meanwhile, Gomez‰Ûªs main rival, Jarvis, experienced problems in the opening lap, and in doing so managed to damage to his exhaust. This handed the KTM rider about an eight-minute advantage going into the second lap. 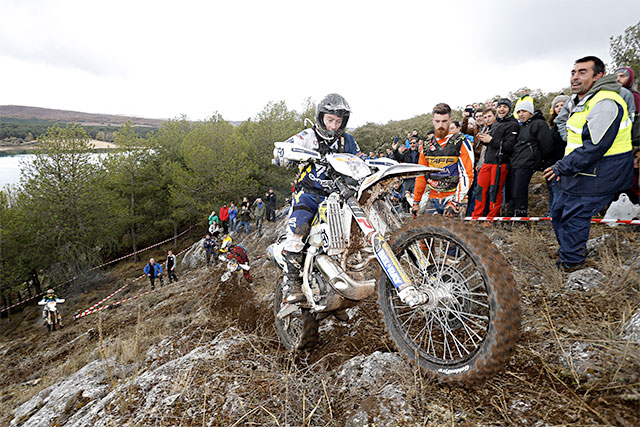 Runner-up Graham Jarvis. Credit: Future7Media
Gomez went on the carry the momentum through most of the race. He entered the pits some 1.5 hours into the event, where riders had to refuel themselves and were allowed no mechanical assistance. On this occasion, he was the only KTM factory rider competing in the Hixpania. Teammate Jonny Walker is currently preparing for the start of the FIM SuperEnduro indoor season.

"Winning this race is incredible. It‰Ûªs my home race, so many people came here to watch me, and to give them a Spanish victory is fantastic," Gomez enthused.

"I‰Ûªm so happy right now. The whole weekend has been really good. I rode well on both Friday and Saturday but in the back of my mind I wanted to save something for today and win when it really counted. I got to my bike okay in the Le Mans style start and exited the cave fourth or fifth. Then after the first big climb I got into the lead and pretty much rode at the front for the entire race. On lap two I found out that Graham (Jarvis) had a problem with his bike and it gave me a big lead. But I had to keep pushing hard until the end because you never know with Graham. It‰Ûªs been a great first edition of the Hixpania Hard Enduro.‰Û 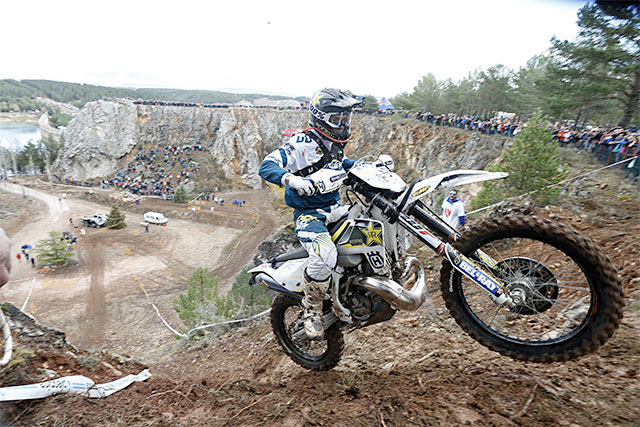 Third placed Mario Roman. Credit: Future7Media
Despite getting caught in traffic during the start of day three‰Ûªs race, runner-up Graham Jarvis quickly worked his way forward. But damaging his exhaust pipe on a rock forced him to pit for repairs at the end of lap one.

Losing eight minutes during repairs to the damage, Jarvis worked overtime to recover. Posting the fastest laps during the end of the race he fought his way back to an eventual secon place result.

"I‰Ûªm a little disappointed not to win but I gave it my best shot despite a major problem on lap one of the main race," Jarvis explained.

"I didn‰Ûªt get a great start, Le Mans starts never really suit me, but I quickly made up the places I lost until about midway around the opening lap. Then I hit my exhaust on a rock. I had to stop and make repairs and that cost me about eight minutes. It was always going to be hard to win after that. At about the halfway mark I got up to second but Alfredo Gomez was too far in front. Overall, it‰Ûªs been an enjoyable weekend‰Ûªs racing, the organisers did a great job with everything for their first time.‰Û 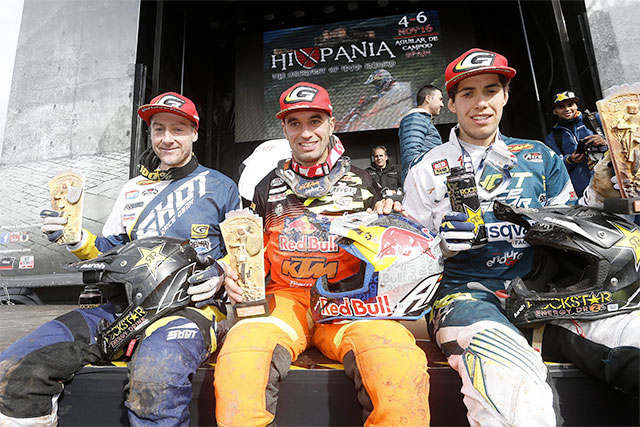