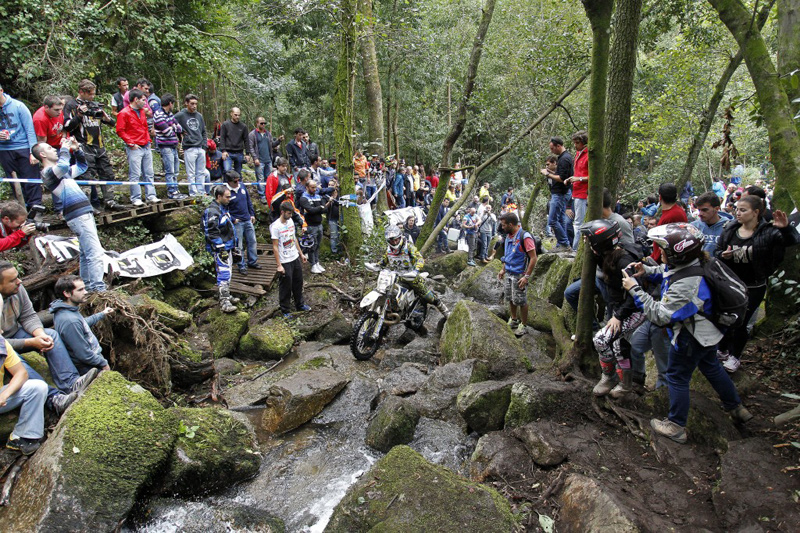 Husqvarna Motorcycles‰Ûª Alfredo Gomez and Graham Jarvis, together with Husqvarna Spain supported rider Mario Roman, have filled the podium at the 2014 edition of Extreme XL Lagares.

Leading the way, Bel-Ray Husqvarna Factory Racing‰Ûªs Alfredo Gomez captured his debut Hard Enduro win and brought to an end what‰Ûªs been a difficult year due to illness and injury.

Fresh off his strong ride at the recent Red Bull Sea to Sky in Turkey, Gomez entered the event in Portugal in a confident mood. Making his winning intentions known from the start, the Husqvarna rider claimed the prologue victory around the streets of Porto.

Knowing the main event would be one of the toughest of the year, Alfredo took control of the lead early on and tried to break away. Leading at the end of the first lap, he fought back midway through the second and final lap when teammate Graham Jarvis momentarily passed him for the lead. Back in front, he upped his pace and pushed on to secure the victory.

‰ÛÏThis year has been very bad for me, with injuries, crashes and appendicitis ‰ÛÒ I felt like things were never going to go my way." Gomez admitted. "But now, finally, things have worked out great for me.

"It‰Ûªs amazing to win Extreme Lagares. I didn‰Ûªt really think I could win here, but things went well for me. I‰Ûªm so, so happy. I took things quite calmly on the first lap because I knew it would be hard on the second lap.

"But I felt good, and I found a good rhythm. Graham passed me half way through the last lap, so I followed him. He made a small mistakes, which was enough for me. I passed him, pushed hard, and stayed in front to take the win. This win is for everyone that's helped me this year.‰Û