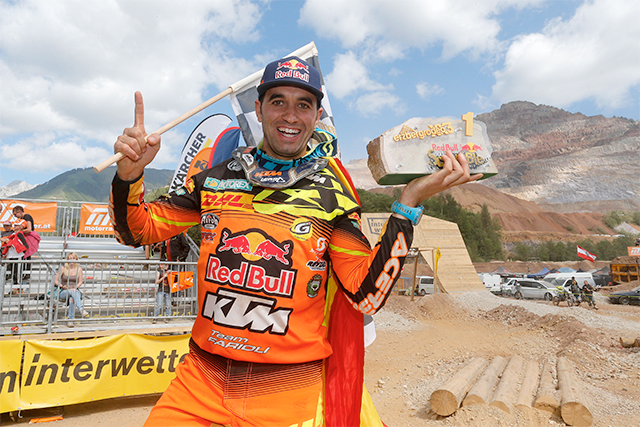 Moving into the lead of the world‰Ûªs toughest one-day Hard Enduro event shortly after the one-hour mark, the Spaniard faultlessly made his way through the most challenging sections of the race to deliver KTM a winning result on home soil. Husqvarna's Graham Jarvis finished second ahead of American Cody Webb rounded out the podium in third.

Completing the gruelling 25 check point course aboard his KTM 300 EXC in a time of two hours and 17 minutes, Gomez steadily worked his way forwards before being the first rider to tackle the hardest sections of the course on his way to a deserved victory.

‰ÛÏIt‰Ûªs an amazing feeling to have won the Hare Scramble,‰Û 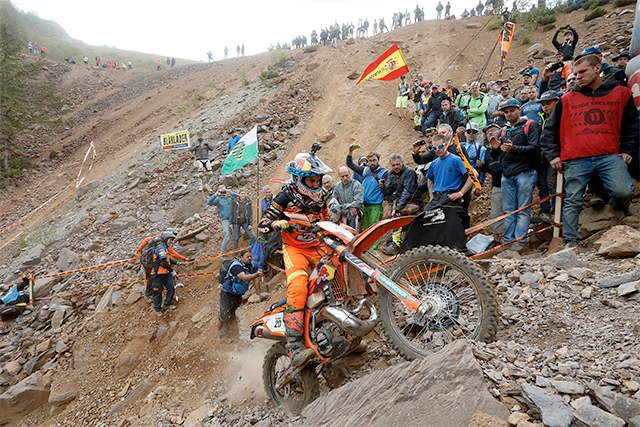 Alfredo Gomez took out the 2017 ErzbergRodeo Red Bull Hare Scramble. Credit: Future7media - KTM Media Library
Graham Jarvis finished as runner-up at the 23rd running of the ErzbergRodeo. Just over three minutes behind eventual winner Gomez, Jarvis rode yet another highly impressive race around the Iron Giant. Once again overcoming a cautious start and having to work his way passed countless riders during the faster, dustier sections of the course, once into the more technical sections he worked his way towards the front but ultimately ran out of time to challenge for the win.

Once again showing himself to be one of the best ever ErzbergRodeo competitors, Jarvis made a typically steady start before increasing his speed as the unforgiving Erzberg terrain intensified. Making up time on his rivals through the extended Karl‰Ûªs Dinner section, the veteran racer worked his way towards the front, passing all but one of the early pace setters. Closing in to within just over three minutes of Gomez, Jarvis claimed a well-deserved runner-up result.

‰ÛÏI‰Ûªm happy with second. Hats off to Alfredo he was very strong, he rode a great race, and I just wasn‰Ûªt able to get close enough to him early enough," Jarvis said, "I didn't get a good start and then lost five or six positions when I messed up one of the hills. I was behind then in some of the single file wood sections. I had to fight my way back. But I felt pretty strong during the second half of the race. I pushed through Karl‰Ûªs Dinner and made up some time there. I seemed to get a little energy back after Karl‰Ûªs Dinner, things were pretty close to Gomez ‰ÛÒ if he‰Ûªd have made a mistake I might have been able to catch him. I don't have any complaints, it was a difficult as it always is but there‰Ûªs not too much I'd change. The younger riders are getting more experienced so I‰Ûªm pleased with second.‰Û 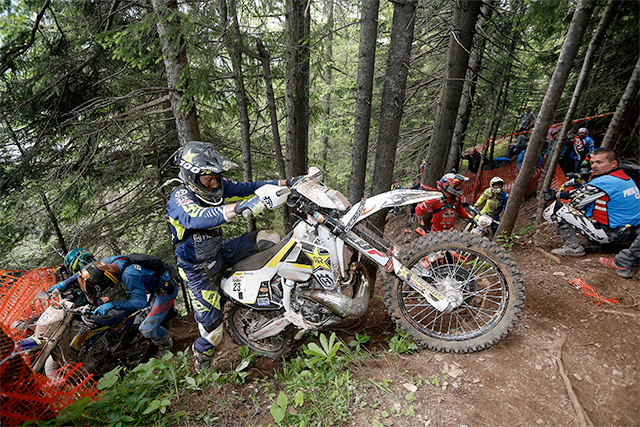 Husqvarna's Graham Jarvis was runner-up. Credit: Future7media
Determined to go all out and improve on his 2016 Red Bull Hare Scramble result of second, Cody Webb‰Ûªs speed at the start of the race consequentially saw the American struggle with arm pump mid-way through the Hare Scramble. Forced to ride on with severe arm pump during the Karl‰Ûªs Dinner section, Cody nevertheless kept pushing hard to earn a place on the podium in third and less than two minutes behind runner-up Graham Jarvis. 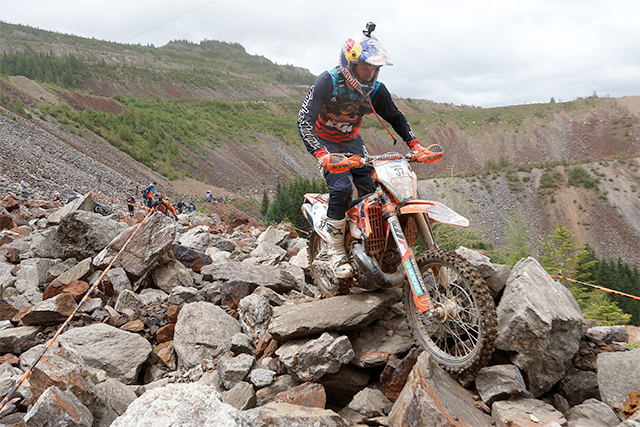 While it was Gomez who topped the event and Webb who rounded out the podium it was former three-time winner Jonny Walker who lead during much of the first hour of racing. Muscling his way around the first turn and into an early lead, Walker set the pace during the early, high-paced series of check points. The first rider to start the infamous Karl‰Ûªs Dinner section, Jonny eventually placed fifth 10 minutes behind Gomez.

‰ÛÏI got a great start and was going really well early on,‰Û