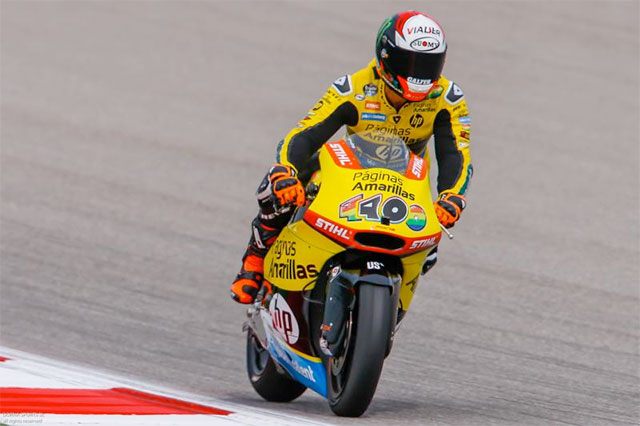 Suzuki Motor Corporation has signed Alex Rins to become its factory rider for the next two seasons. This defines the Team Suzuki MotoGP rider line-up for 2017 and 2018 with Rins alongside Andrea Iannone aboard the factory GSX-RR.

Alex Rins Navarro was born in Barcelona on the 8th of December 1995 (20 years old) and started to race at the age of seven. His debut in the World Championship was in 2012, at the age of 16 in the Moto3 class. He won his first pole position at the second race of his debut season. He raced in Moto3 for three seasons, collecting a total of eight victories, becoming vice-champion in 2013.

In 2015 he stepped up to Moto2, ending his first season in the class with 2nd place overall, winning the Rookie of the Year award after collecting two wins, a total of ten podiums and three pole positions. In 2016 he has already scored two wins and currently leads the points standing after seven rounds.

Rins' signing signals the end for current rider Aleix EspargarÌ_ at the conclusion of the 2016 MotoGP season.

Team Manager Davide Brivio said, ‰ÛÏAlex Rins is a young rider who has already proven to have much talent, always fighting within the top positions of the World Championship since his debut in every class, making him the type of rider who we want to support for the future.

"To pair Andrea Iannone, an experienced rider with such a young talent as Alex creates a perfect combination for our challenge. We believe that the combination of these two riders, together with the further development of the Suzuki GSX-RR, can help us to create a strong team to compete at the maximum level. It wasn‰Ûªt an easy choice and we feel sorry for Aleix who we would like to thank for his hard work and the real passion he has continued to put in our project since it started. We wish him all the best for his future but in the meantime we will support as best as we can to try to get the best possible results together until the end of this season.‰Û