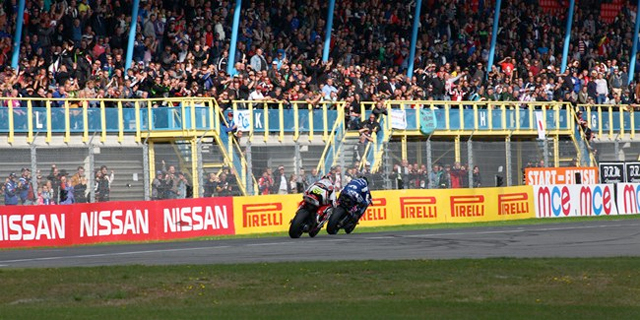 The fight for the MCE Insurance British Superbike Championship kicked off in epic style in the first race of the weekend from Assen in a dramatic battle for supremacy between Alex Lowes and title rival Shane 'Shakey' Byrne as the tussle for the win went down to the wire.

Lowes had hit the front of the pack on the opening lap as Byrne and James Ellison all pushed for the front spot and before the half-way point of the lap the Milwaukee Yamaha rider had claimed the lead from Lowes, Byrne and Josh Brookes.

A lap later and the leading contenders were not giving an inch in their quest for the first points haul of the Showdown with Byrne and Lowes swapping positions five times in three corners with the defending champion taking the initial advantage.

The fourth lap saw Lowes back ahead of Byrne and the Samsung Honda rider was holding off the opposition until a few laps later when the Rapid Solicitors Kawasaki contender pulled off another move on the final corner as they pack ended the seventh lap.

Ellison held the position at the front but Byrne and Lowes were in close contention as the lead trio diced for the opening podium places of the Showdown, but there was heartbreak for Ellison when a technical problem on the twelfth lap forced him out of the race.

The fight for the win then became a full on scrap between Byrne and Lowes and on the penultimate lap the Samsung Honda rider moved ahead into the final corner, setting the stage for a dramatic conclusion with the leading title contenders swapping places six times on the final lap but Lowes just had the edge. Lowes scored his fifth consecutive win ahead of Byrne as he now trails the triple champion by a single point in the standings.

"We were not giving up on that last lap that's for sure and I managed to pass him with only the last corner left and I was lucky to come out ahead; if there had been more corners we would have done a few more moves I am sure," Lowes exclaimed. "I struggled a bit in the mid part but it was a great race and I am so happy to be up here.

"The bike was working well and the last three laps of that race were fantastic. Every time I tipped in to a corner Shakey was there but I gave it everything. If I don't win the title it will not be for the lack of trying," he added.

Tommy Bridewell on the second of the Milwaukee Yamahas claimed the final podium position on his debut with the team after the disappointing exit of his team-mate Ellison. Bridewell had fought his way up the order having had a close race with Rapid Solicitors Kawasaki's Noriyuki Haga and then Tyco Suzuki's Josh Brookes. Bridewell had edged out a gap leaving Haga and Brookes scrapping with the Australian getting ahead mid-race for Tyco Suzuki.

Haga had then dropped into the clutches of Jakub Smrz and over the final laps there was nothing between the pair as PJ Jacobsen also closed to fight all the way to the finish line at the very end of the race after his 18th place qualifying position. Smrz claimed Padgetts Honda their first top six of the season from Jacobsen in seventh and James Westmoreland in eighth who moved ahead of Ryuichi Kiyonari in the standings. Jon Kirkham and Barry Burrell completed the top ten with Kiyonari in 14th position. 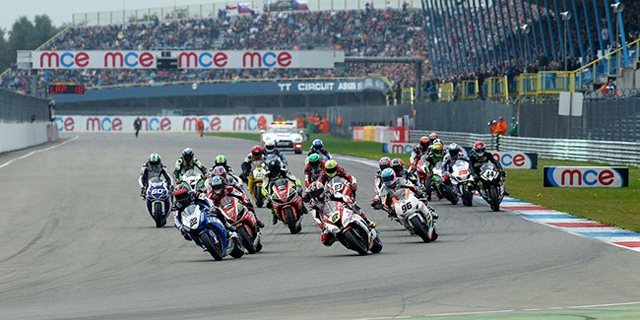 Things got crazy when race two started resulting Byrne crashing out and Alex Lowes being disqualified for causing the incident Credit: britishsuperbike.com
Alex Lowes crossed the line first in the dramatic second MCE Insurance British Superbike Championship race of the weekend at Assen ahead of James Ellison and PJ Jacobsen, but following an incident with Shane 'Shakey' Byrne the Samsung Honda rider was excluded from the race.

Byrne had got off to a flying start from Lowes and Noriyuki Haga on the second of the Rapid Solicitors Kawasaki's with James Ellison in fourth on the opening lap. The Japanese rider didn't wait long to make a move and charged ahead of Lowes, with the pair swapping places several times before the end of the opening lap.

Byrne held the lead until the third lap when Lowes made a move into the final corner to hit the front but then the drama began to unfold. A lap later Ellison moved into third behind Lowes and Byrne before the second Milwaukee Yamaha of Tommy Bridewell crashed out, taking Haga with him.

At the front the drama continued as Lowes came into contact with Byrne and the Rapid Solicitors Kawasaki rider crashed out at high-speed. The crash bought out the Nissan GT-R Safety Car and as the pack bunched up it was Ellison, Lowes, PJ Jacobsen, Josh Brookes and Jon Kirkham.

The race resumed on the seventh lap and within two laps there was another Title Fighter out of contention as Brookes slid off the Tyco Suzuki into the final corner, ending his aspirations of taking advantage of his rivals non-point score.

Ellison held the lead at the front of the pack until the 15th lap when Lowes scythed ahead to hit the front and despite the best efforts from the Milwaukee Yamaha rider he was forced to settle for second on track.

Jacobsen completed the provisional podium line up to claim his first top three finish of the season in his rookie campaign.

Lowes' exclusion promoted Ellison to first, Jacobsen to second and Ryuichi Kiyonari to third as he held off the challenge from Kirkham. The leading Buildbase BMW finished narrowly ahead of his team-mate and Title Fighter James Westmoreland.

Chris Walker returned to the top ten in seventh for Quattro Plant Bournemouth Kawasaki after a close battle with Peter Hickman on the Lloyds British GBmoto Honda in the closing stages. Danny de Boer claimed a top ten finish for Bathams Honda at his home track with Dan Linfoot completing the top ten.

Top Image: Alex Lowes won race one before being disqualified in Race two after an incident with Shane Byrne
Credit: britishsuperbike.com