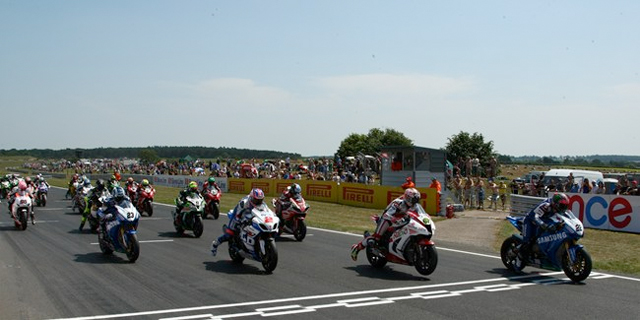 Samsung Honda's Alex Lowes stormed to the opening MCE Insurance British Superbike Championship win of the day at Snetterton as he launched ahead of title rivals Josh Brookes and Shane 'Shakey' Byrne in a scorching opening race.

Brookes got his race off to a flying start from the front row for Tyco Suzuki to head the pack on the opening lap, but with Tommy Bridewell suffering a technical problem on lap two the Nissan GT-R safety car was deployed.

Brookes, Byrne, Lowes and James Ellison were the leading quartet and when the race resumed on lap five the Samsung Honda rider was ready to stun his rivals. Lowes instantly passed Byrne into Montreal and then gave the same treatment to Brookes into Agostini on the same lap.

Lowes was pushing hard to edge out a lead in the blistering heat of Snetterton as Brookes fought to stay within striking distance for Tyco Suzuki, however over the closing laps the Honda rider had the edge to claim his second win of the season from the Australian.

"It's always hard when it is this hot and Josh and Shakey wet off quick at the start." Lowes stated after race one. "I've worked my arse off this weekend to be here on the top step of the podium and we put in so many laps after the nightmare of Friday when we had problems.

"I enjoyed the race and at the end we could have a bit of fun sliding it around with the grip dropping off.

"I've stopped Shakey's run of wins and shown him what we can do and also come back after my disappointment at Knockhill; that is what we needed to do. We just need to try and do it all over again in race two," he added.

Brookes had in turn come under pressure from a disgruntled Byrne and as the pair crossed the line for the final time side-by-side the Rapid Solicitors Kawasaki narrowly missed out and was forced to settle for third.

Ellison held fourth place after he had moved himself up the order for Milwaukee Yamaha as the team continued to work to close the gap to the leading trio ahead of Ryuichi Kiyonari who finished fifth.

James Westmoreland had a resurgent second half of the race after the Buildbase BMW rider made a mistake into Nelsons on the sixth lap; he ran off the track but kept himself upright to rejoin and then carve his way back up the order.

Robbin Harms and the Doodson Motorsport Honda team celebrated their best result of the season with an eighth place after he held off Padgetts Honda's Jakub Smrz and Josh Waters who claimed ninth place. Matteo Baiocco completed the top ten for Rapido Sport Racing Ducati as they scored their first top ten finish in the Championship.

In Saturday's Supersport sprint race it was Gearling Kawasaki's Alastair Seeley who raced to the win ahead of Luke Mossey and Ben Wilson. Australia's Billy McConnell and Jason O'Halloran rounded out the top five.

Top Image: Race one of the Superbike Class launches off the line at Snetterton
Credit: britishsuperbike.com