Australia‰Ûªs four-time and defending Qatari Superbike Champion, Alex Cudlin, will make a surprise appearance at the final round of the 2014 FIM Superbike World Championship, riding for the Pedercini Kawasaki team at the Losail Circuit in Doha, Qatar, on 31 October-2 November. 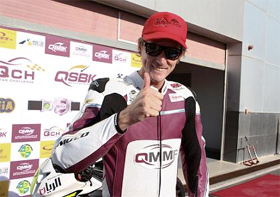 Alex will have his plate full for the weekend as he will also be racing in round two of the 2014/15 Qatari Superbike Championship on his QMMF Kawasaki ZX-10R that supports the WSBK racing program at the Losail Circuit.

The race will cap off a busy year for Cudlin, who will have raced in the World Endurance Superstock Cup, Qatari Superbike Championship and FIM Superbike World Championship this season.

"Lucio (Pedercini) contacted me last week and asked if I‰Ûªd be interested in riding for him, so then it was just a matter of working out a deal and also lining up my Qatar Championship duties to coincide.

"I have to sincerely thank not only Pedercini Racing Team but also my QMMF team, because without them giving me permission to race both Championships it would just still be a dream.

"I know this circuit like the back of my hand but I know for sure it will be very tricky to swap from a Qatar Superbike spec bike on Dunlop tyres to a World Superbike EVO spec bike of Pirelli tyres. I aim to be as competitive as possible and in all honesty just enjoy myself and take in the moment as it will be very surreal.

"I will also be racing under number 95, In Respect to my current QMMF racing team. 95 is the national number of the Qatar federation, so I will use it proudly. I can‰Ûªt wait to get on that plane back to Qatar for what will surely be a very busy weekend!‰Û