Alex Cudlin Finishes 2013 on the Podium 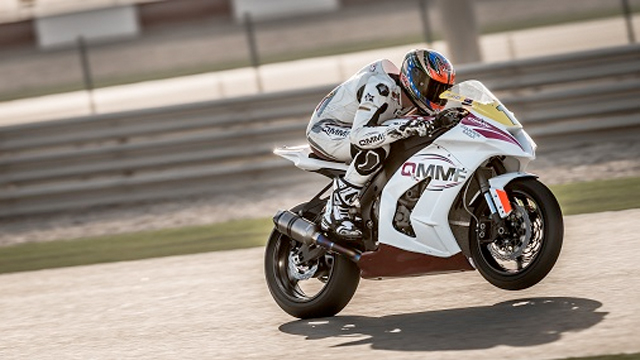 The Australian was the fastest rider on track for all of the timed practice and qualifying sessions, however a computer glitch with the circuit‰Ûªs timing system rendered his pole setting time of 2:03.3s obsolete, handing a first-ever pole position to Cudlin‰Ûªs QMMF teammate, German Nin Prinz with a 2:03.605 lap time.

Cudlin and West immediately established themselves as the pace setters in race one, with Cudlin taking the lead by Turn 3 of the opening lap. However his race would go awry when West blasted past Cudlin to start lap two, with Cudlin‰Ûªs Kawasaki beginning to chatter violently.

The chatter was later diagnosed as a buckled front wheel, with the suspected damage occurring during a routine tyre change. Cudlin held on for second place in race one as West took the win. German rider Nina Prinz took third.

It wouldn‰Ûªt get much better for Cudlin in race two, with the Aussie champion suffering severe arm pump ‰ÛÒ the first time he has ever experienced the condition during his racing career. It was all Cudlin could do to hold onto second place as West again cleared off into the distance with Nina Prinz taking third.

But it wasn‰Ûªt all bad news, with Cudlin‰Ûªs main title rival, Nasser Al Malki (BMW S1000RR) taking fifth place in both races and slipping to 18 points adrift of Cudlin in the championship lead.

‰ÛÏIt‰Ûªs a shame to end the season in that way because I thought I had the speed to take it to West in both races." Cudlin stated. "Getting arm pump was a strange sensation ‰ÛÒ I‰Ûªve never experienced it before, even in 24 hour Endurance races ‰ÛÒ and I have a feeling I got it because I spent the whole of the first race trying to hang onto a machine that was more bucking bronco than motorcycle.

"Regardless, I‰Ûªm happy to finish the 2013 racing year in one piece. I‰Ûªve had some good success with my third Qatari title and helping SERT take the World Endurance Championship at Le Mans, so I‰Ûªll relax back home in Australia, do a bit of dirt track racing, and get myself fired up to come back here in February ready to race.‰Û