Alex Cudlin Battles The Best In The Heat of Qatar 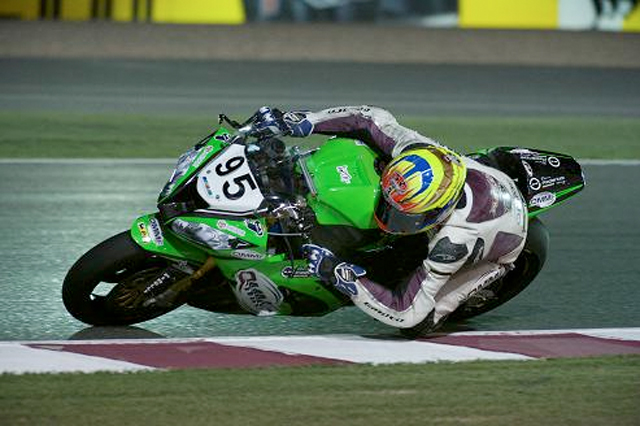 Australia‰Ûªs four-time and defending Qatari Superbike Champion, Alex Cudlin, made a surprise appearance at the final round of the Superbike World Championship at the Losail circuit in Doha, Qatar on 31 October ‰ÛÒ 2 November for the Pedercini Kawasaki team.

It was a busy weekend for the Taree resident, who also did double duty at the event, racing in round two of the Qatari Superbike Championship on the undercard to the WSBK race on his QMMF Kawasaki ZX-10R.

Cudlin completed a staggering amount of laps across the weekend, not helped by the fact he contracted food poisoning on the Friday night after practice for the WSBK race.

However, despite some promising pace in the practice and qualifying sessions, that was as good as it got for Cudlin in the WSBK encounter. A crash after a tyre change on the grid saw his race one end after just one lap and a loose handlebar forced him to pit for repairs early in race two, dropping him a lap down and seeing him come home 18th and the final finisher.

Cudlin could still take some comfort in the fact his times from race two would have placed him around the battle for the point scoring positions. His speed across the weekend has opened a few eyes in the WSBK, and could lead to more race opportunities next season.

In the Qatari series, it was damage limitation as Cudlin took 3-1 results to hold onto his championship lead over Mashel Al Naimi, who took the race one win in scorching 40å¡C temperatures in the Qatari daylight. With cooler conditions for race two at night under lights and Cudlin feeling better after his earlier food poisoning, the Aussie reasserted his authority to take race two by 6.6sec from Al Naimi with Cudlin‰Ûªs teammate, Prinz, third.

"It was a huge weekend." Cudlin admitted. "I‰Ûªve never covered so many laps of a racetrack on any given weekend in my life, save for a 24 hour race.

"The food poisoning really knocked me around and the first Qatari Superbike race in the heat of the day was an absolute killer, plus I had to back it up with all the WSBK sessions, but despite the troubles in the WSBK races I‰Ûªm glad I showed some good speed in front of the world championship guys.

"I knew with all the riding and swapping bikes and tyres that I wouldn‰Ûªt be at my best for the Qatari series, so I just rode to limit the championship damage and get ready to come back swinging next time.

"It was a shame to drop the bike in race one of WSBK ‰ÛÒ I almost crashed about five times before I actually did so we may have had a rear tyre issue there, and the handlebar issue in race two was a real pain as I was up for the fight to snatch some world championship points but when the handlebar came loose I was forced to pit which lost me 1 lap on the leaders. But that‰Ûªs racing.

"I want to say thank you to the Pedercini Kawasaki outfit and to Lucio Pedercini for giving me a shot in WSBK, and of course to my QMMF team for allowing me to do double duties across the weekend. I‰Ûªll now turn my attention back to the Qatari series to try and take title number five."

Top Image: Alex Cudlin Battles The Best In The Heat of Qatar