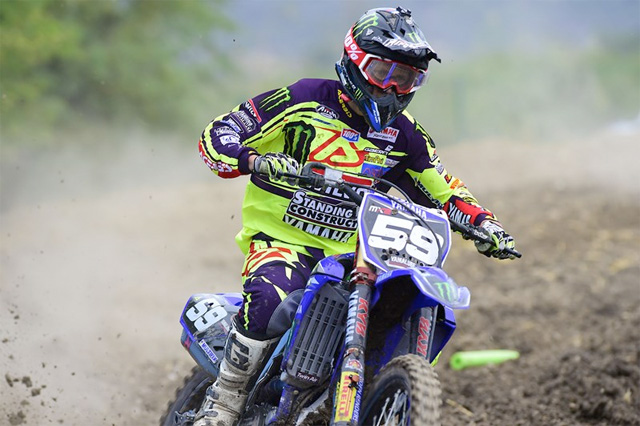 Wilvo Standing Construct Yamaha Official MX2 Team rider Aleksandr Tonkov will skip MXGP Latvia on May 1st to rest from an injury sustained during a training crash in Belgium this week.

Tonkov, currently fourth in the 2016 MX2 FIM World Championship standings, bruised his back on Tuesday while training for the MXGP series upcoming round six in Kegums, Latvia. Team staff transported the Russian rider immediately to a local hospital for x-rays.

Tonkov went for further consultation with Dr. Toon Claes in Belgium on Wednesday.

"Aleksandr went to the hospital in Neerpelt where they did some x-rays and a scan. Nothing is broken, but he severely bruised his back," said Wilvo Standing Construct Yamaha Team Manager Tim Mathys.

"Yesterday he went to Dr. Claes who advised to not ride in Latvia to give the body time to heal. Unfortunately crashing and injuries are also a part of racing," Mathys said.

Tonkov will travel to Latvia with medical consent for sponsor contact, as the Russian rider is well-known at Kegums and upright movement is considered positive therapy for this type of injury.

Tonkov has raced to the podium twice this season and showed consistent and strong speed in his starts on the YZ250F. Wilvo Standing Construct Yamaha Official MX2 Team staff said the rider will remain under observation as he recovers and his status for round seven in Germany will be decided after further consultation.