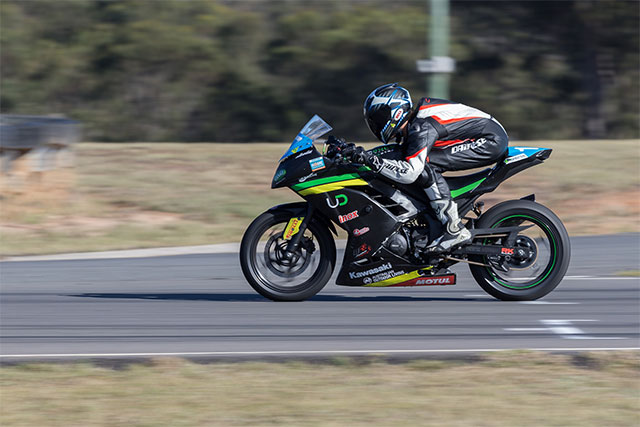 Morgan Park Raceway fired to life today, with four classes completing qualifying before lining up for their first races of the weekend, as part of the fifth instalment of the Yamaha Motor Finance Australian Superbike Championship presented by Motul Pirelli.

With the penultimate round making the stakes even higher, spectators were treated to action packed racing when bikes hit the track today, with Toparis, Edwards, Alderson and Carroll recording their first wins of the weekend.

With practice yesterday under their belts, the Up to 300cc and Over 300cc Akrapovic Production class headed out for two qualifying sessions this morning - Kawasaki Up to 300cc rider Tom Toparis who has only been road racing for 6 months, found incredible speed on track during the first session, setting a new best lap on lap ten (1:26.309), shocking the ASBK field. In Qualifying 2, Toparis once again was unmatchable, setting the fastest time and securing pole position for when racing kicked off this afternoon.

A huge grid of 22 Akrapovic Production class riders lined up for their first race of the weekend after lunch time today, and it was Up to 300cc rider Toparis who showcased incredible skill, launching in to the early race lead. But Toparis was not getting away without a fight, and after only three laps, Sam Condon was well within striking distance.

Just back from the lead pair was Over 300cc riders Callum Alderson and Brandon Demmery who were also locked in to their own battle for third position. But it was Yamaha‰Ûªs Alderson who was able to break away and close in on Condon‰Ûªs rear wheel, eventually making the pass for second on lap five.

With only one lap left in race one and Toparis with a two second lead, the battle for second position had the crowd on the edge of their seats ‰ÛÒ Condon and Alderson ensuring the results went down to the wire.

But when the chequered flag flew, it was Toparis who had reason to celebrate, taking his first ever Up to 300cc Production class race win, followed by Condon who edged out Over 300cc rider Alderson to take second. Alderson eventually wrapped up the race in third but with the Over 300cc win and a new lap record, followed by Demmery who collected fourth in the race but second in the Over 300cc standings.

Race Centre‰Ûªs Sells (3rd in Up to 300cc), and Ford Brother‰Ûªs Racing‰Ûªs Ford (3rd in Over 300cc) wrapped up race one in fifth and sixth places respectively.

There was action in the Honda Moto3/125 GP class from the moment bikes hit the track for qualifying this morning, but it was a familiar sight with Championship points leader Brian Houghton finding new speed late in the session, setting a lap time of 1:22.495, which local girl Tayla Relph was unable to match. And in the second qualifying session, Houghton went better again, dropping his lap time by nearly a whole second to 1:21.546, to record a new best qualifying record and secure pole position for Race 1. Relph was second quickest on track, her time from this morning seeing her awarded with second position on the grid (1:22.591), followed by Graeme Boyd Motorcycle‰Ûªs Tommy Edwards who wrapped up qualifying as the third fastest rider on track.

When bikes lined up for race one this afternoon, it was a disappointing start to racing for Sarah Fairbrother who was unable to take part due to a bike problem on the grid, but when bikes did launch off in to turn one, it was Edwards who snatched up the early race lead. However, it wasn‰Ûªt long before Edwards had a fight on his hands, Houghton making up plenty of ground to make the pass and become the new race leader by the end of lap one.

Despite Houghton‰Ûªs attempts to break away, Edwards was not prepared to let the experienced rider out of his sights, while local Relph was just off the pace back in third position, followed by local youngster Locky Taylor in fourth

As race once reached it‰Ûªs closing stages, spectators were treated to a battle for the lead, and before long Edward‰Ûªs had taken control of race one, leaving Houghton to chase his tail.

And from there, that was the order that they finished in. Edwards collecting the first Honda Moto 3/125 GP race victory from Houghton in second, followed by Relph and Taylor who wrapped up race one in third and fourth places respectively.

When the Yamaha Motor Finance R3 Cup class headed out for their first qualifying session this morning, despite only being a cool 14 degrees, it took no time at all for front runner Callum Alderson (YRD) to warm himself up, setting the fastest time on his final lap of the session with a 1:27.655, nearly a full second quicker than his closest competitor Puma RV Motorsport‰Ûªs Zac Levy (1:28.617). Despite a crash in the second qualifying session, Alderson remained unstoppable breaking in to the 1:26‰Ûªs with a 1:26.922 on lap seven, seeing him awarded with pole position for race one. Levy was close but again unable to match Alderson‰Ûªs speed, wrapping up the final session second quickest on track with a 1:27.664.

When race one got underway for the YMF R3 Cup riders this afternoon it took no time at all for second fastest qualifier Levy to pick up the race lead, however after only one lap it was Alderson who led the way from Ford Brothers Racing's Hunter Ford and Stay Upright Yamaha rider Jack Passfield ‰ÛÒ Levy dropping back to ninth position.

By the three lap mark in race one, both Alderson and Ford began to separate themselves from the pack, Ford also beginning to apply the pressure on Alderson for the lead, and by the time the pair headed in to turn one on lap five, Ford looked ready to make his move.

With four laps to go, Alderson and Ford‰Ûªs gap on the remainder of the field had stretched out to nearly seven seconds, Passfield continuing to hold down third place from Aidan Hayes in fourth, while Levy had made his way back to fifth position.

In the closing stages of race one, Alderson received somewhat of a reprieve, with Ford beginning to drop off the pace slightly settling in to second position.

And when the chequered flag was raised, that was exactly how the positions stayed, YRD‰Ûªs Alderson collecting the race one win, while Ford crossed the line in second position followed by Passfield in third.

Fourth place in race one was collected by Hayes, while Michael King finished in fifth position. Unfortunately for early race leader Levy a mechanical issue forced him to DNF race one.

After showing impressive speed during the Club Challenge practice session yesterday, Honda VFR 400 rider Anthony Carroll was nearly a whole two seconds quicker during the classes‰Ûª qualifying session this morning (1:26.605) while Sam Condon, who is racing both the Production and Club Challenge classes this weekend was second quickest in Q1 (1:27.917). Simon Dickson aboard his Honda CBR 250 recorded the third fastest time on track this morning with a 1:27.974, followed by Leigh Holmes and Reid Battye.

When race one kicked off for the Club Challenge class late this afternoon, fastest qualifier Carroll wasted no time in getting to the race lead, and after only one lap had stretched out his gap on second placed Dickson to nearly three seconds.

And it was there that Carroll stayed for the entire race - no other rider able to catch him throughout the eight lap journey.

Despite Dickson holding second position for the majority of the race, the Honda mounted rider dropped back a position in the later stages, allowing Holmes to slot up in to second position.

So when the chequered flag flew, it was Carroll who secured the race one victory, followed by Holmes in second, while Dickson wrapped up the Club Challenge rider‰Ûªs first outing in third.

Riders and teams will now prepare for tomorrow‰Ûªs action on track when racing resumes for competitors at Morgan Park Raceway.

For a complete list of results from today‰Ûªs qualifying sessions, head to www.computime.com.au.