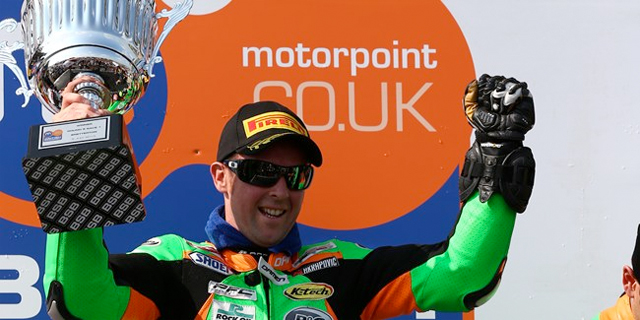 Alastair Seeley spelled trouble for his Motorpoint British Supersport Championship rivals by claiming a double win for the Gearlink Kawasaki team by heading off his team-mate Ben Wilson in the second race at Snetterton.

Australia's Jason O'Halloran had led the pack on the opening lap before Seeley stole the position at Brundle; the Gearlink Kawasaki aiming for a repeat performance of yesterday's race.

"It is nice to bounce back so well with this double win and be back in front in the standings after Knockhill." Seeley stated. "I went away and did my homework. We did a test here, a circuit that I like so it has been so good to dominate, get the championship lead while Stuart Easton was having a bad weekend.

Now I'm looking forward to Brands Hatch. It's a case of being smart, controlling the championship, being consistent and stay 100% focussed and do the job," he added.

The Samsung Honda rider's run of bad luck continued though as despite running in a podium position he was forced to retire after he was shown the black and orange flag when he lost the belly pan on the third lap.

At the front Wilson was chasing his team-mate but he couldn't close the gap despite pushing hard as he edged out Billy McConnell on the Smiths Racing Triumph. It was another disappointing race for Martrain Yamaha's Stuart Easton who could only salvage a thirteenth place to lose his lead in the overall standings. Graeme Gowland and local rider completed the top five.