Aiden Wagner Unbeatable At Wakefield Park, Moves To Within One Of Morris 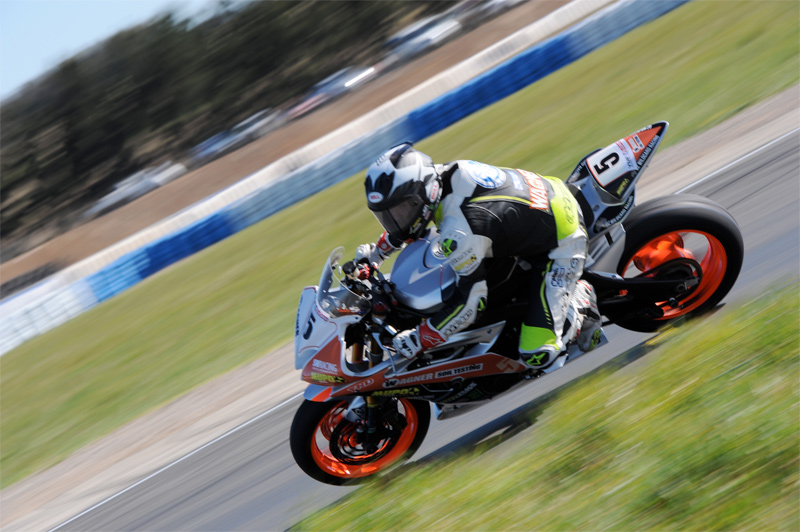 By sweeping the day Wagner moved to within one point of the series leader Aaron Morris (Maxima Yamaha) who could only manage three, third-place finishes for the day.

As the lights turned green in the opening Supersport race, Wagner got a poor start from pole position and ended the first turn in fourth spot.

Spriggs got the perfect start from third on the grid to take the lead from Morris at the first turn.

A couple of corners into the race Wagner pushed up into third, and the top three streeted clear of the rest of the field, that was lead in fourth by Jay Presepio.

Less than 1.5 seconds separated the top three by the end of the second lap, and as they settled into the race Spriggs looked extremely comfortable in the position of race leader.

But on the third lap the red flag came out after Cam Russell crashed at turn ten, forcing riders back to the pits and the race to be restarted with eight laps remaining.

When the race resumed, Spriggs again got a great start to take the lead while Wagner moved into second and Morris third at the first turn.

The trio again pushed clear from the field, and coming down the straight at the end of the first lap, Wagner moved into the lead.

Again less than two seconds separated the top three through four laps of the race, as Wagner then set about extending his lead at the front.

Morris tried desperately hard over the final two laps to catch Spriggs, but it was to no avail ‰ÛÒ the series leader having to settle for third, Spriggs finishing in second, and Wagner recording a well-deserved race win.

In race two it was again Spriggs who fared best off the line, taking the lead into turn one from Morris and Wagner.

Wagner passed Morris and moved into second on the opening few turns and began to put the pressure on Spriggs, before passing him on the straight at the end of the opening lap.

Just .288 of a second separated the pair at the end of lap four, while the gap to Morris had pushed out to 2.310 seconds, with Michael Blair (Campbell Home Timber and Hardware) in fourth and Presepio in fifth.

The gap to Morris increased significantly over the next few laps and the only question left to answer was whether or not Spriggs had the speed to catch Wagner.

He didn‰Ûªt ‰ÛÒ Wagner super impressive in claiming his second race win on the trot, leaving Spriggs to take second and Morris with third.

In the final race of the day Morris was forced back into seventh after a horrid start, while Wagner and Spriggs took up their usual positions at the front of the field.

Up front Wagner and Spriggs swapped the lead four times on the opening lap, before Wagner took control of the race and working himself into a comfortable rhythm.

While Spriggs was never too far behind, Wagner kept him at bay from lap three for the remainder of the race recording a wonderful race win to make it three from three on the day.

Spriggs‰Ûª second placing gave him a trifecta of seconds at round five, while Morris did well to move up into third spot by the time he reached the finish line.

Wagner and Morris will now be battling for the title at Eastern Creek at the final round in November, and with just one point separating the pair, who will come away as champion is anyone‰Ûªs guess.