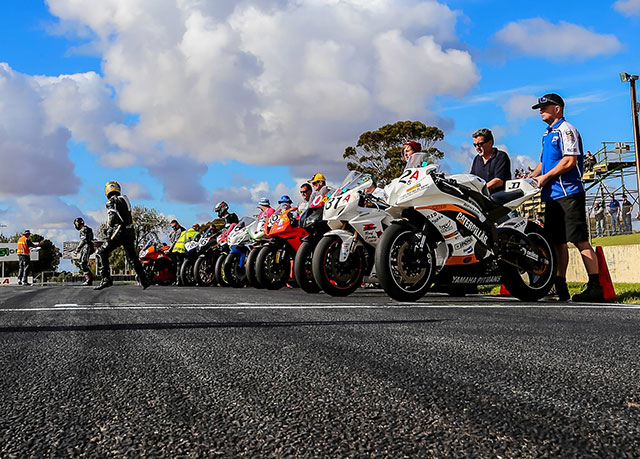 The growingly popular Adelaide 3 Hour race hosted by the Phoenix Motorcycle Club of SA is set for even further expansion in 2016, with even more prize money on the line and the event continuing to attract some of the country‰Ûªs biggest riders, early predictions suggest the race weekend should be bigger than ever as momentum builds.

Entries are now officially open through the Phoenix Motorcycle Club website for the two day event, as well as the official practice day to be held on Saturday 10th September and Friday 18th November. The practice days will provide the chance for the local riders to hone in on the setup and development of their bikes, while for the interstate riders, it will be a chance to acclimatise to the technical Mallala circuit.

The IMS/Adelaide Motorcycle Centre Adelaide 3 Hour is set to kick off at 1pm on the Sunday, using what has become a tradition, the Le Mans style start. Having featured well known riders such as Josh Waters, Steve Martin, Daniel Falzon, Paul Young, Dave Johnson and Adelaide based Manx GP competitor, Royce Rowe, the competition for a podium result is sure to be high once again.

With a minimum of $10,000 in total prize money for the main event, the overall winner is set to receive $4,000 with second to take $2,000, third will receive $1,000. As an extra incentive, the first C/D Grade team will collect $1,000 and the first one bike team will pick up $2,000. Negotiations are still under way to finalise pole position prizemoney as well as other awards.

In addition to the IMS/Adelaide Motorcycle Centre Adelaide 3 Hour, the weekend will also include four further feature races; the Steve Martin Cup for B/C/D Grade riders; the Reece Bancel Trophy for C/D Grade riders, the Auldana Foundations Mallala 75 and the Les Rowe & Associates Mallala 50. Both the Mallala 75 and Mallala 50 have traditionally featured Adelaide 3 Hour teams, using the extra track time as an opportunity to finalise their setups over a longer race distance.

President of the Phoenix Motorcycle Club of SA, Rick Dowsett is excited at the growth of the IMS/Adelaide Motorcycle Centre Adelaide 3 Hour in recent years and anticipates that this year‰Ûªs event is sure to see even more interest from riders and spectators alike.

‰ÛÏSince its humble beginnings, the Adelaide 3 Hour has grown to become a race that is well recognised around Australia for its high level of competition, enthusiasm by competitors and its uniqueness for the longer race distance. I‰Ûªm really looking forward to seeing entrants from across South Australia and beyond converge on Mallala for the weekend. I can‰Ûªt thank all of the sponsors enough for their support in 2016 and we look forward to producing a fantastic weekend of racing,‰Û