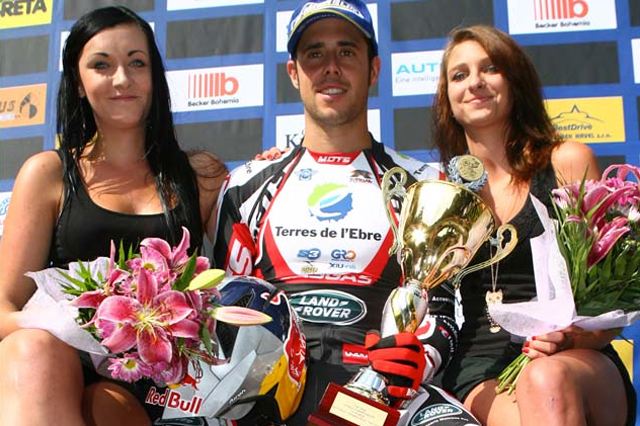 Adam Raga, riding for Gas Gas, snatched his fourth win of the 2013 FIM Trial World Championship to keep his title hopes very much alive and kicking at the Czech Republic round on Sunday the 14th of July.

Raga won the low scoring event, but still trails Honda, Montesa's Toni Bou in the general standings, which the reigning champion now leads by two points. Albert Cabestany aboard his Sherco closed out the rostrum in third place.

The Czech Republic as it is now known has been a part of the FIM Trial World Championship since its inception back in 1975. Hosted in Ricany during the early years, the Czech Trial GP then briefly visited Topol‰ÛªCany before moving to Nepomuk from 1991 to 1998.

Since 2000 the ex-motocross circuit at Kramolin, just a few kilometres away from Nepomuk, has been the home of the Czech Trial GP, which last took place back in 2010. As has been the case in more recent editions, the sections for today‰Ûªs event were scattered in and around the nearby woodland that surrounds the permanent facility.

Searing heat in the days before and during the trial created a dry and dusty course, with all twelve sections following a very similar theme and little variation. Bou and Raga could not be split as they progressed around the first of three laps having both only lost a single mark in the fifth hazard, before Toni was to strike disaster.

Bou‰Ûªs failure to crest the middle rocky outcrop in section nine would leave him playing catch up for the rest of the day. Despite not being too familiar with chasing rather than leading, Toni used the power of his factory Cota 4RT to good effect and managed to match Raga‰Ûªs one mark total on lap two.

Trailing Raga by five marks as the arch rivals headed out on the course for a third and final time, Bou was handed a life line when the Gas Gas rider made an unexpected mistake in section three, putting the two championship contenders dead level with nine hazards remaining.

Knowing this, Toni then sensed his moment to snatch the win from Raga in the very difficult fifth section and attempted to stay feet up when a single dab would have been a safer approach. His all-out attack for victory would ultimately backfire as he recorded his second five of the day to put Raga back in control, a position Adam would not relinquish as he beat Toni by a mere three marks come the close of the competition.

‰ÛÏToday I made a very good trial, with only one real mistake." Raga explained after the event. "The five in section three on the last lap was the only error, and even then it was a little unfortunate.

"I went in the same rut as the other two laps, but on the final time it was a bit deeper and it hit my feet quite hard. I was perhaps lucky not to injure my feet. Anyway I managed to keep my concentration and to finish the job off.‰Û