Adam Raga won the war of attrition high in the Pyrenees at the TrialGP Andorra, round three of the 2017 FIM Trial World Championship last weekend.

On a long, hot and physically demanding day the Spaniard kept his cool to inflict the first defeat of the year on reigning champion Toni Bou - Repsol Honda and reduce his compatriot's series advantage to just ten points. The result also ties Raga with the great Dougie Lampkin on seven wins apiece at TrialGP Andorra.

"I'm always delighted to beat Toni and to stop his unbeaten run makes today's result even more special," says Raga. "I've been working very hard on my physical conditioning and on the motorcycle and this preparation has paid off today."

"The team has also put a lot of effort into the bike and I'm confident we now have everything in place to challenge for further wins until the end of the season." 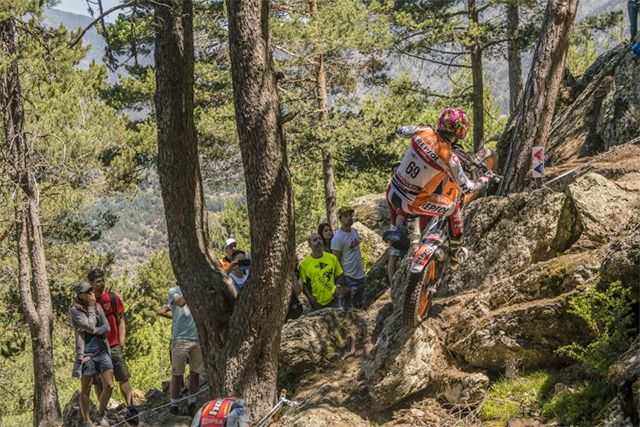 "I‰Ûªm really happy to finally get my first podium in a world championship," Busto said. "Last year I was really close and this year had started quite badly, so it was time to change the trend. The weekend went very well, yesterday with the pole position and I‰Ûªm really pleaded with today‰Ûªs second place.

After the opening section in the centre of Sant Julia de Loria where Bou now calls home, riders headed up into the mountains where the remaining sections were plotted on the side of a steep, wooded valley.

The field then remained in the mountains and after a twenty-minute break they began their second lap at section two, only returning to the town centre at the end of the competition to sign off with a final attempt at section one.

Bou's opening lap would prove to be his undoing and four maximums placed him four marks behind rising Spanish star Busto and six behind Raga on observation at the halfway stage.

With all of the TrialGP riders choosing to err on the side of caution, the entire eighteen-man field picked up time penalties and when these were added on it was Busto who led Raga by one mark after lap one with Bou a further six marks adrift. 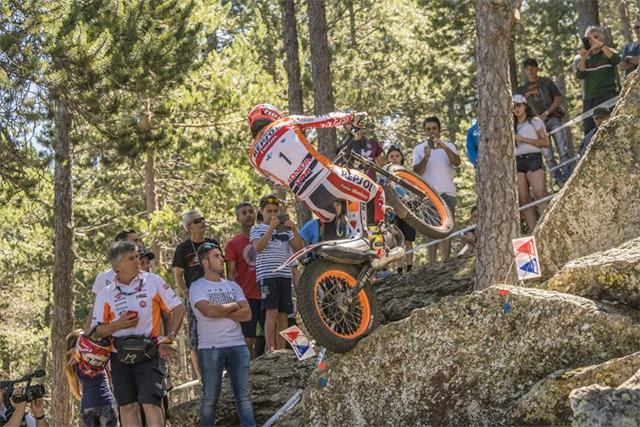 Defending champion Toni Bou's winning streak ended in Andorra with a third place.
As we have seen so often before, Bou - bidding for his eleventh consecutive FIM Trial World Championship - upped his game on the second lap. After parting with just one mark on lap two the victory hinged on section fifteen which had taken maximums off every rider at every attempt.

Having seen Raga drop a five and with just Busto following him, Bou knew that simply to get through with a three would put victory within his sights but it wasn't to be and his fifth maximum of the Trial handed Raga the win on thirty-two from Busto on thirty-three and Bou on thirty-four.

"The worst mistake was the one that I made in section fourteen as I did the section virtually without looking as I was really running out of time and I went outside of the permitted zone," Bou explained. "That error proved really costly and basically robbed me of the victory. The other penalties were to be expected, but that one at the fourteenth‰Û_ Well, we all know that these are things that can happen, so the only thing that we can do is keep on fighting round by round in the championship."

The 2017 TrialGP series continues in France next weekend.