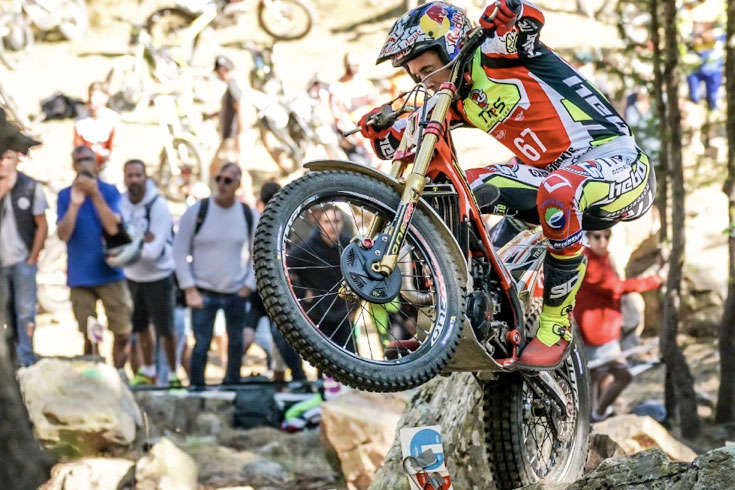 Round two winner Adam Raga
Adam Raga turned the formbook on its head on the second day of competition at TrialGP France, the opening round of the 2020 Hertz FIM Trial World Championship, held high in the Alps at the Isola 2000 ski resort.

Raga ‰ÛÒ World Champion in 2005 and 2006 ‰ÛÒ bounced back from his fourth-placed finish on Saturday to inflict the first defeat on defending champion Toni Bou since June 2018. Bou, a comfortable winner on Saturday, slipped to third on Sunday in the premier TrialGP class behind 22-year-old Jaime Busto as Spanish riders once again filled the podium steps.

The revised sections were a lot harder at round two across all classes but still comprised big rocks on an imposing hillside with loose ground in between meaning grip was at a premium.

The deciding hazard in TrialGP was section six which featured two huge steps where Bou ‰ÛÒ who appeared to be riding with an injured forearm ‰ÛÒ added three maximums to his final score of 41 compared to Raga‰Ûªs 1-0-1 scores on his way to a total of 33. Busto also excelled here, overcoming a five on the opening lap to record a clean and a two as he finished the day on 40 marks lost.

Spain‰Ûªs Jeroni Fajardo led after the first two laps but any hopes he had of repeating his round wins in 2009 and 2018 evaporated as Raga carded a sensational final-lap total of just three and the Sherco rider ended the day in fourth on 44, three ahead of Jorge Casales who matched his day-one finish.