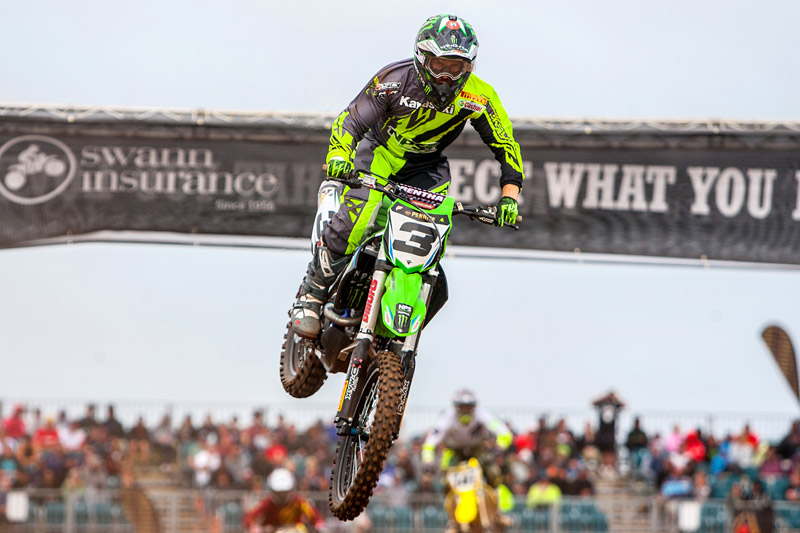 Although National Pump Monster Energy Kawasaki riders Adam Monea and Jake Moss were affected by injury at the 3rd & 4th rounds of the 2014 Australian Supercross Championship at Phillip Island, Victoria over the weekend, Adam Monea was able to ride through the pain of 2 injured ankles to retain his 2nd place standing in the championship.

The weekend got off to a rocky start for National Pump Monster Energy Kawasaki's Adam Monea when he cased a jump during Friday's press activities at Phillip Island where the 2 rounds were being raced alongside the Australian MotoGP.

The jarring impact of his feet on the foot-pegs on the hard packed track resulted in injuries to both of Monea's ankles. However he made the call along with team management to continue competition and was able to ride through the pain to come away with a top 5 finish in Saturday's round 3 and Sunday's round 4 of racing.

Monea claimed 4th place on Saturday and also won a heat race on Sunday before lining up for the 4th round main event. In the main, Monea was brought down in a first turn pile-up and had to ride through the pack for a 5th place finish.

Monea's two top 5 finishes in each round means he retains his (equal) 2nd place standing in the championship that he secured at Bathurst last weekend.

"It's a real bummer getting these little injuries." Monea admitted. "I still feel like I could have been on the podium on Sunday but I was brought down in the first turn crash that left a lot of the field on the ground.

"It was hard to come back from there. I'm unsatisfied with the results because I feel like I'm a genuine contender for race wins. I need to heal up as best I can and I'll be in Brisbane to try and finish as best I can." 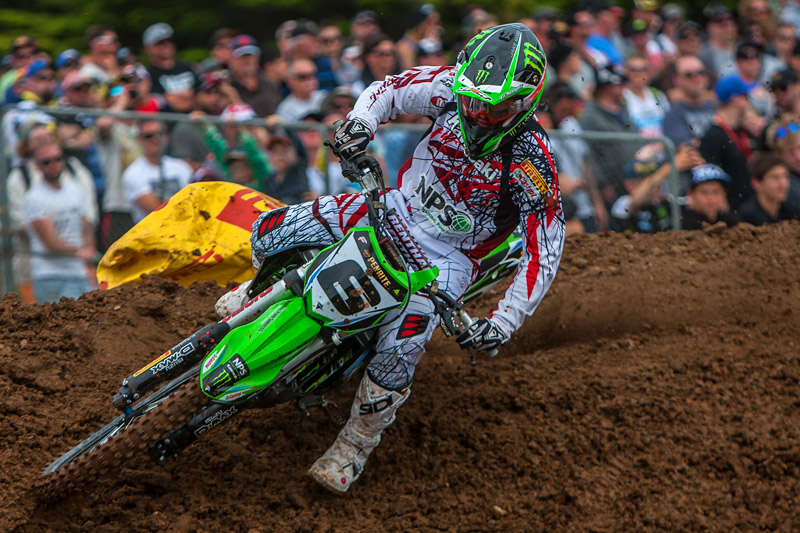 Jake Moss was also able to secure a heat race win during Sunday's round 4 of racing however first turn crashes in both finals (Saturday & Sunday) prevented him from proving his potential. Sunday's heavy first turn crash aggravated an existing shoulder injury and sidelined Moss for the remainder of the race.

"It was a tough weekend for the team however I feel we still came away with decent results considering what could have been." National Pump Monster Energy Kawasaki Team Manager Troy Carroll said.

"It really is a shame that Jake got tangled in first turn crashes in both main events and Adam Monea was not at full strength which is a shame because I believe that Adam is the only rider out there who can honestly take it to Matt Moss.

"Adam is getting quicker and quicker on the supercross track which is very promising."

The 2014 Australian Supercross Championship concludes in Brisbane, QLD on Saturday 8th November. Adam Monea will be looking to reach the top step of the podium and finish the series as strongly as he can.