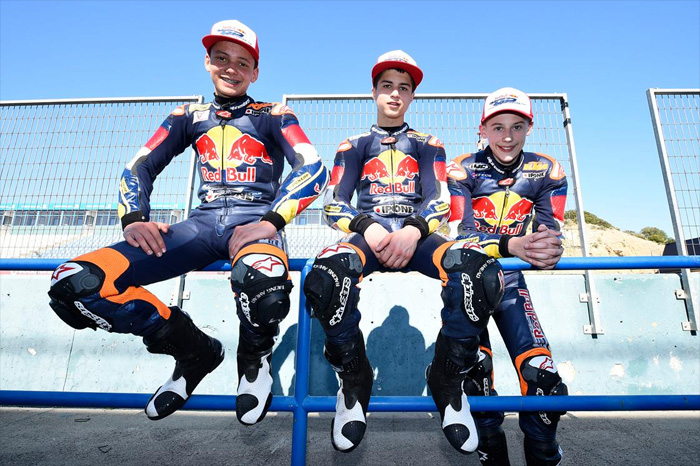 Assen will be well worth the wait for the 24 teenagers who know that the 'Stichting Circuit Van Drenthe' is bound to produce two classic Red Bull MotoGP Rookies Cup races.

It was back in the first days of May that the Spanish Grand Prix saw the opening two races of the season and it has been too long a pause.

Plenty of time for Bo Bendsneyder to savour his two impressive Jerez wins. An equal opportunity for his competitors to build their determination to prevent the 16-year-old Dutchman from repeating them and his single victory in Race 2 at the Dutch TT last season.

Bo and his compatriots, 16-year-old Robert Schotman and 15-year-old Walid Soppe, have featured strongly in the build-up to their home race as the Netherlands looks for racing heroes to match the historic figures like Wil Hartog, winner of the 1977 Dutch TT, Boet van Dulmen, winner of the Finnish Grand Prix in 1979 and Jack Middelburg, winner of the Dutch TT in 1980.

It may seem a long way since those halcyon of Dutch motorcycle sport but even though the Rookies' fathers are probably too young to remember them those warriors of a bygone era are still held in high regard by the incredibly enthusiastic TT fans.

The Rookies though are thinking of making their own history and it is not going to be an all Dutch affair. Twice on the podium in Jerez, Australian 17-year-old Olly Simpson has to be a favourite for his first Cup win and he lies second in the points table to Bendsneyder thanks to his pair of thirds in Spain.

Fabio Di Giannantonio is third in the table after a 5th and a 2nd and the 16-year-old Italian may also claim his first win. Lining up with the same thought is Spanish 15-year-old Oscar Gutierrez who took 2nd and 6th in the opening weekend. Unlike Di Giannantonio who had already had a second last year in Brno it was the first time on the podium for Gutierrez.

Look out for the two Japanese, 15-year-old Kaito Toba and 14-year-old Ayumu Sasaki. Though they are both first year Rookies they showed in Jerez that they are quick learners and could well challenge the more experienced.

This weekend's Rookies Cup races can be seen live on www.redbull.tv and on TV stations around the world with the broadcasts beginning 10 minutes before race start.