A day of catch-up for Kirk Gibbs at Port Macquarie 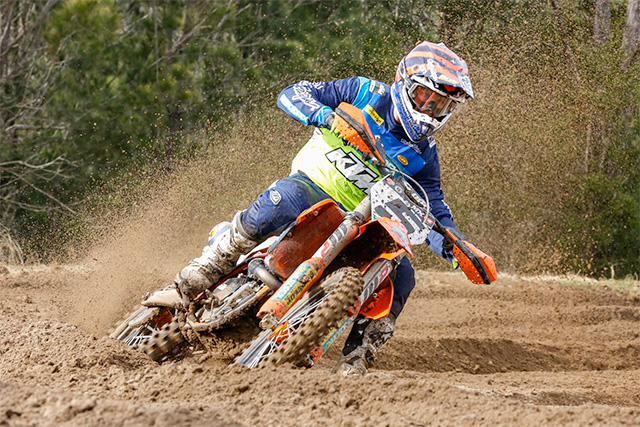 The KTM Factory Motocross Racing Team‰Ûªs Kirk Gibbs underlined the never-say-die attitude for which he is famous as he ground out two determined rides at today‰Ûªs eighth round of the Motul MX Nationals series at Port Macquarie, NSW.

An unrelenting charge from dead last in moto two saw him finish within one place of a monumental podium ‰ÛÒ but it wasn‰Ûªt to be and he posted seventh for the round, which went to championship leader Dean Ferris ahead of Todd Waters and Luke Clout.

Hot on the heels of his last-start round win at Shepparton, Gibbs posted the third-fastest time in SuperPole behind Ferris and KTM team mate Luke Styke, but wheelspin off the start in race one left him buried in the pack, and he fell while pushing through ‰ÛÒ finally finishing as high as sixth.

Off to a better start in the second, he was felled by another rider‰Ûªs bike on the way to the first turn, and crashed jarringly.

He shook it off and went to work on the KTM 450 SX-F, carving from last place through to an outstanding fifth behind Luke Clout ‰ÛÒ the man he would have replaced on the podium had he been able to pass him.

Gibbs is in peak form though, and the 2015 MX Nationals Champion looks forward to the next round at Toowoomba ‰ÛÒ the scene of his career-first premier class moto win way back in 2013.

‰ÛÏThat‰Ûªs just how it goes, we knew looking at the track yesterday it was pretty tight, pretty juniorish - it was going to be one of those tracks where you‰Ûªd struggle if you didn‰Ûªt get good starts," Gibbs lamented. "First start we got a little bit of wheel spin and I was trying to make places up but crashed trying to get around Kyle Peters and lost a lot of ground.

"I charged through to the back of Clouty and I couldn‰Ûªt find anywhere to get around him. I was frustrated with that, but I got a good jump in the second. Then Mosig crashed just to the side of me, but as he crashed, his bike sort of flicked out and I had nowhere to go but into it. I played catch-up from there. I rode really well, so I‰Ûªm not disappointed with the way I‰Ûªm riding. We‰Ûªre going to try a few different things between now and Toowoomba and hopefully that can help. I know I can go for those wins if I get the starts. I‰Ûªm looking forward to the hills of Toowoomba, and I feel like I can do well there, once I iron out those starts. That‰Ûªs where I got my first moto win in 2013," Gibbs concluded. 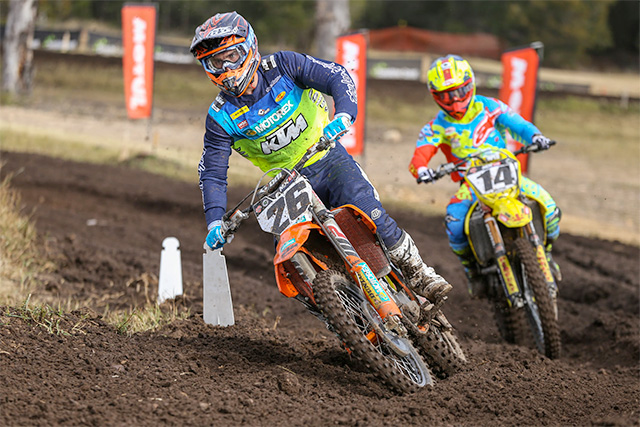 After featuring in SuperPole Luke Styke went on to finish 8th. Credit: MXN Images
Team-mate Luke Styke starred in the SuperPole, equalling his best performance ever with second, but also struggled with the traffic in his first moto, finishing seventh.

He took the factory team‰Ûªs second KTM 450 SX-F to sixth in moto two, for eighth on the day, and maintains fifth place.

‰ÛÏObviously the start of the day was pretty good for us with second in SuperPole," Styke said. "I had a really good gate pick so I started next to the box where I thought the start was going to come, but I got pushed off the track and I was like 15th place coming around the third turn. I had an uphill battle. Obviously Port Macquarie is pretty one-linish, but it felt like I just exerted so much energy to get nowhere. In the second start I came around about second or third, but I didn‰Ûªt really have the feel that I had in the first race and a few guys got past. I couldn‰Ûªt get the good flow on, I was a bit tight or conservative maybe. We made a few changes in the last few weeks that are definitely benefitting me, I‰Ûªve just got to keep grinding and it will eventually happen.‰Û