A battle in Britain as Binder breaks clear 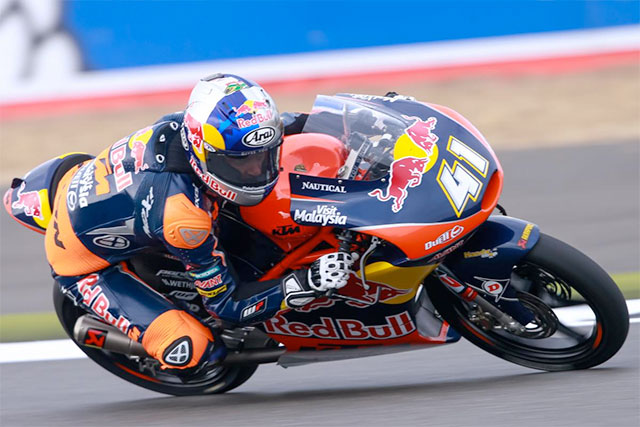 After spots of rain punctuated morning Warm Up for the MotoGP grid, Moto3 got out on a dry track as the weather held off - grey skies and cool temperatures, but dry asphalt for the first showdown of the day.

Francesco Bagnaia (PULL&BEAR Aspar Mahindra) got a good start from his first ever pole position, with P2 on the grid Enea Bastianini (Gresini Racing Moto3) dueling with his compatriot for the lead as the lights went out.

The large lead group headed away from the pack and was soon joined by the early superstar of the race, as Jorge Navarro (Estrella Galicia 0,0) sliced through the field from eighteenth on the grid to hit the lead after only a handful of laps.

Navarro, who won in the Catalan GP and has since had a more difficult run of races after breaking his leg in a training accident, was seven tenths clear in third before the rain hit qualifying, and showed his pace in the incredible comeback.

Another incredible ride back from lower on the grid came from Mahindra Racing rider Stefano Manzi as the Italian moved up from thirty fourth on the grid to join the lead group. With Nicolo Bulega (Sky Racing Team VR46) in eleventh the last man in the incredible train at the front, the group dueled it out with riders heading for apexes four or five wide, and no one able to escape.

The last few laps saw the chaos truly break free in a classic Moto3 battle, before a move from Manzi took Navarro out, with Andrea Migno (Sky Racing Team VR46) unable to avoid the crashing Spaniard. Navarro remained down for a few moments as he recovered from the impact.

As the last lap dawned, it was a Red Bull KTM Ajo 1-2 with Binder leading rookie teammate Bo Bendsneyder ahead of polesitter Bagnaia, with the key mover on the last lap proving the Italian as he pushed his way past into P2 to take another podium on the Mahindra machine. With the lack of points score after Navarro's fall, Binder increased his championship lead by another big chunk of points with his stunningly-judged win.

The South African put the pedal to the metal on the last lap to break away from his teammate just behind, getting a gap that proved just enough for him to cross the line ahead and leave the chaos in the dust.

After taking their first win in Assen earlier in the year and announcing his move to Moto2 next season, Bagnaia is on good form as the paddock heads for his home round, which will also be Mahindra's 100th race in the world championship. The Italian's calm and well-executed move on Bendsneyder was another good example of his growing experience, like his pole lap in the difficult conditions of Saturday afternoon. He also leapfrogged compatriot Enea Bastianini with the points haul from the podium, slotting into third in the title table.

Bo Bendsneyder took his first podium with a stunning performance to come home third, despite losing out on the final lap to Bagnaia. Dueling in the front group throughout the race in the Dutchman's most impressive race performance to date, the rookie and former Red Bull Rookie had some incredible moves throughout, staying calm and crossing the line for the first Dutch podium since Assen 1994.

As the lead three broke away from the chaos behind, Manzi shook off compatriot Bulega to come home in an impressive P4, despite the incident with Navarro, and Bulega completed the top five. Fabio Di Giannantonio (Gresini Racing Moto3) put in another impressive rookie ride to sixth, heading more experienced compatriots Niccolo Antonelli (Ongetta-Rivacold) and 'Diggia's teammate Bastianini. Aron Canet (Estrella Galicia 0,0) was the lead Spaniard in ninth, ahead of fellow rookie at 2015 FIM CEV Repsol Moto3 rival Joan Mir (Leopard Racing). Mir was subsequently demoted a position for exceeding track limits, promoting Jorge Martin (PULL&BEAR Aspar Mahindra) into the top ten. Antonelli was then later disqualified for a technical infringement, moving those behind him up the order.

The next race sees Moto3 lead the charge at Misano World Circuit Marco Simoncelli, after the 'Beast' Enea Bastianini took the win - his first - in 2015, with Binder now a staggering 86 points clear at the head of the table.