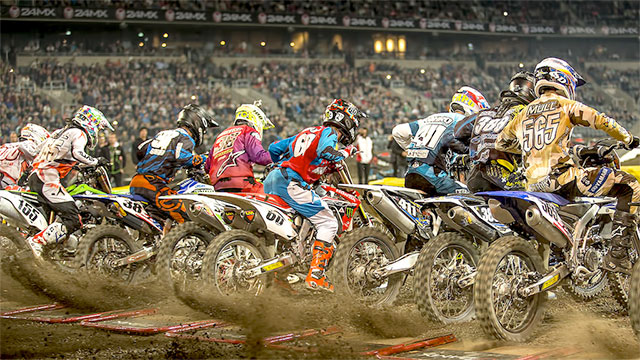 Some of the world‰Ûªs best supercross riders are set to return once again to the capital of Scandinavia, Stockholm, later in the year.

On October 8 the second 24MX International Supercross, featuring a full-scale SX track, will take place inside the magnificent Tele2 Arena.

Over 6.000 tons of dirt will be brought inside the state-of-the art arena to create a spectacular and challenging track. The 24MX International Supercross to showcase a strong field with some of the best American and European riders. After Jason Anderson‰Ûªs historic inaugural Husqvarna win in 2014 the 24MX International SX the pressure will be on to take the coveted crown!

Supercross legend, former 250SX and Monster Energy Cup champion Davi Millsaps has been attracted as one of the headliners. Millsaps will be joined by the talented and smooth Martin Davalos. Last but not least Swedish fans get a unique opportunity to see their own Fredrik NorÌ©n in action! Fast Freddie is living the American dream and has made a name for himself over the pond with top-ten finishes in the AMA Nationals.

Organiser Staffan Bergman said, ‰ÛÏWe‰Ûªre proud to bring an event of this magnitude to Sweden again. To stage the 24MX International SX at the Tele2 Arena is absolutely a privilege. I couldn‰Ûªt think of a more suitable location to watch world-class SX and FMX riders in action!‰Û