2021 Dakar Stage 8: Stage win for Cornejo extends his lead over Price to a minute 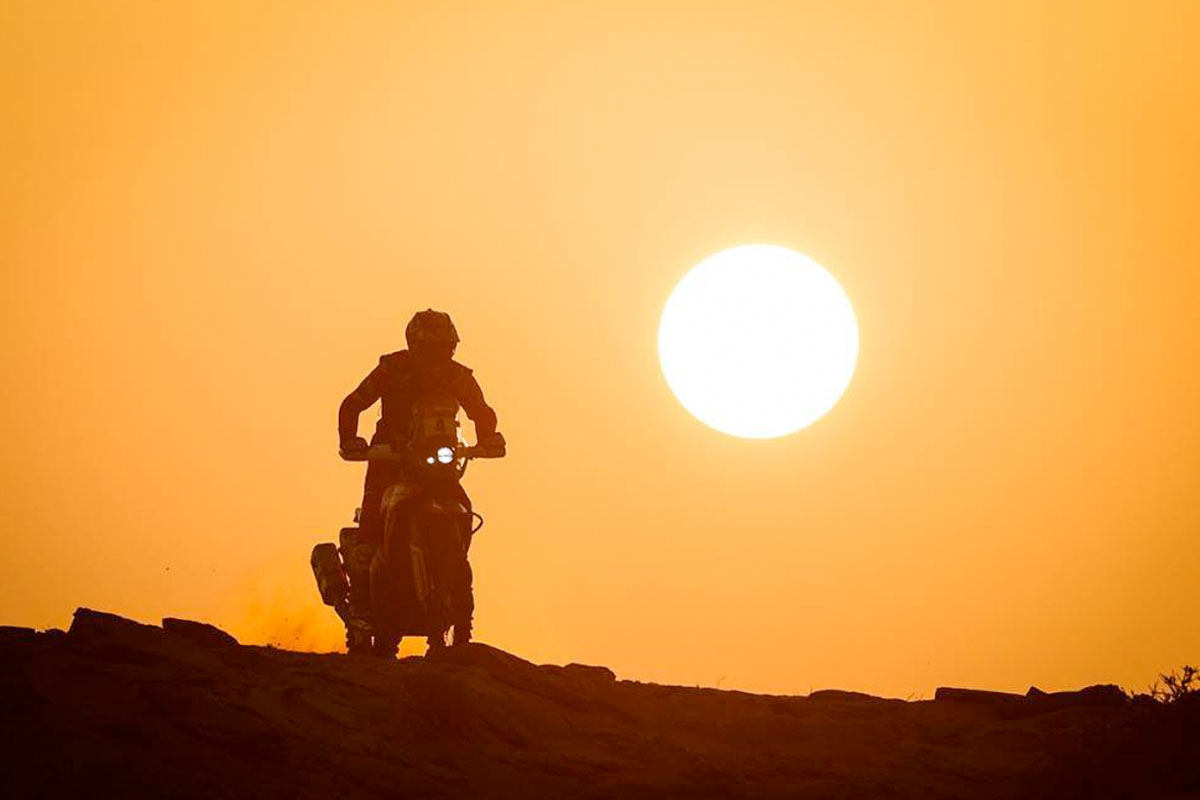 JosÌ© Ignacio Cornejo, who not only clinched the stage but also consolidated his position at the head of the overall standings.
Nacho Cornejo has topped the timesheets on stage eight of the 2021 Dakar Rally to gain a minute in the overall rankings over stage runner-up Toby Price while Ricky Brabec rounded out the top three.

Marking the second half of the rally‰Ûªs marathon stage, the 709km day eight offered no respite for the riders. Leaving the temporary bivouac at Sakaka behind and heading west, a 226km liaison led riders to the start of the 375km timed special. Comprising a challenging mix of sandy tracks followed by difficult to navigate stony pistes, the stage to Neom would test all riders‰Ûª skill and endurance on the second of two incredibly tough days in the desert.

Nacho Cornejo did not suffer from leading out the stage just behind his team-mate Ricky Brabec as many have through the 2021 edition. Limiting any mistakes he went on to win the stage to increase his lead over Toby Price at the top of the general standings by just over a minute.


‰ÛÏI started second, behind Ricky, my team-mate. He was pushing super hard at the beginning. I was pushing hard too but didn‰Ûªt catch him, I caught him maybe a just a little bit before refuelling," Cornejo explained. "I think we rode at a very good speed today. There were no navigation mistakes.

"There were some tricky parts, but we found the way and didn‰Ûªt make any mistakes and that‰Ûªs where we gained a lot of time. On the second part, we switched a little bit for which one was opening, but it was a nice stage ‰ÛÒ pretty fast but in the end, some very nice landscapes: these huge rocky mountains are just amazing, so I‰Ûªm happy to be riding here. With four days to go the plan is the same as it is now: try to ride as fast as we can, don‰Ûªt get lost, don‰Ûªt crash and take care of the bike, so I think that if we keep the same focus that I‰Ûªve been bringing on this race or on this last couple of days I can do pretty good. We‰Ûªre very focused, but now is the time to rest and think about tomorrow‰Ûªs stage‰Û 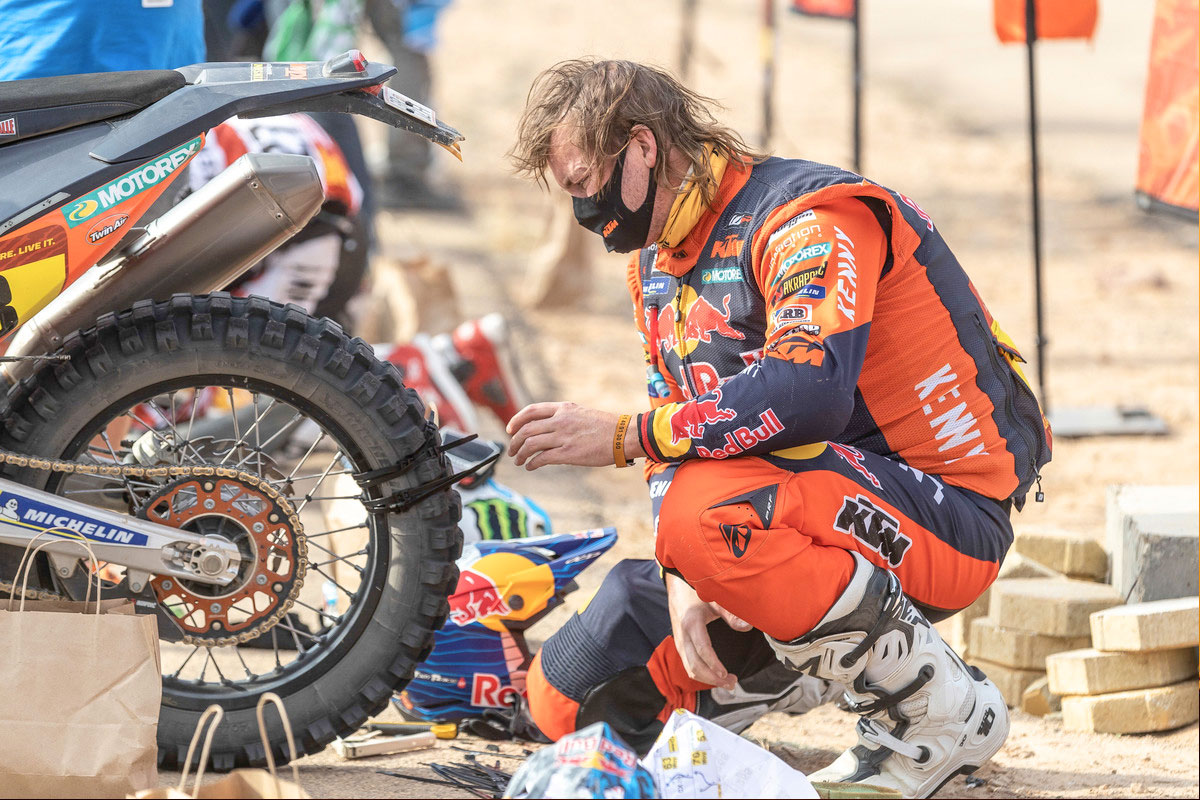 Some Aussie bush mechanic skills and cable ties saw Toby Price finish second on the stage and hang onto second overall. Photo: Rally Zone
Toby Price endured a mixed first leg of the marathon stage. The Australian led till well over the halfway point when unfortunately a rock sliced open his rear tire, forcing him to ease his pace to the finish.

Not able to change or swap the damaged item due to the marathon stage rules, Price carried out a makeshift repair last night, via some cable ties, before today taking on the 709km stage eight. Riding cautiously, Price successfully completed the stage in an incredible second place. Testament to the quality of the tire, and the repair made by the Australian, Price remains well in the hunt for the podium, lying second overall in the provisional standings.

‰ÛÏIt‰Ûªs been a really tough couple of days for me," Price said. "I damaged my tire yesterday and of course, not being allowed to change it, I had to repair it as best I could for today and hope it held up. I rode a good stage, but all the while I was trying to be as smooth as possible ‰ÛÒ not accelerate too hard in case the issue got worse. Second on the day is not bad at all, I lost a little more time to the rally leader, but I‰Ûªm just glad I got to the finish line.‰Û 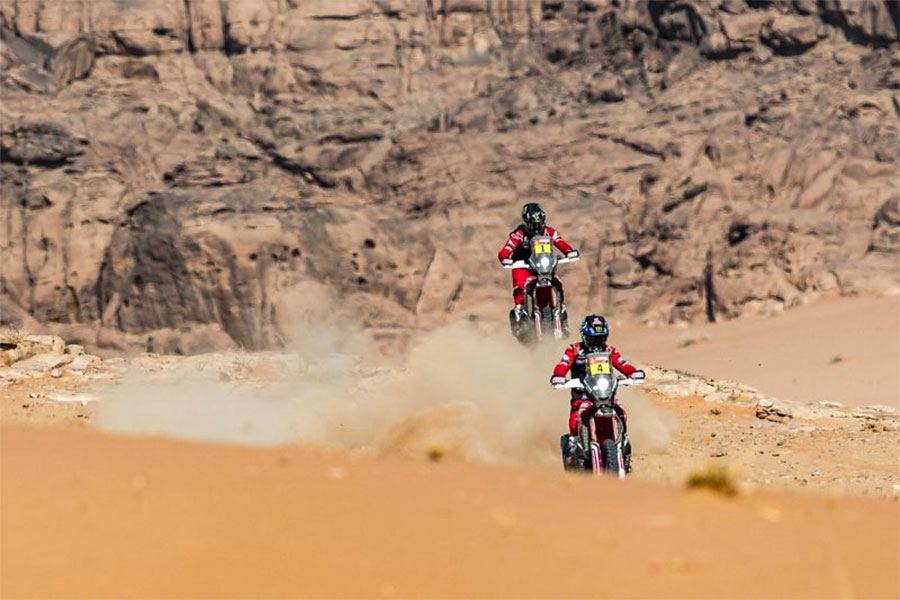 Third today, Ricky Brabec, pictured leading his team-mate and stage winner, is gaining momentum at the right end of the Rally but still needs to make up almost 18 minutes to defend his title successfully. Photo: Rally Zone
Having opened the stage Ricky Brabec was soon caught by his team-mate Cornejo who started just behind him and the pair headed west together to the end of the special, opening the track with a scorching pace. The America was classed as second for the stage.

"Yesterday we did well, but I was scared that we would have to open. We rode well today. I‰Ûªm kicking myself in the head. I wish we‰Ûªd had the speed and the focus last week. We are fighting and we are stronger now. There‰Ûªs four days left. It‰Ûªs the same part of the desert that helped me last year. Hopefully somewhere we can pull out time. There‰Ûªs four days and a lot of things will change. Everyone has used tyres. Tyre cuts are going to be a factor. Bike fatigue. Rider fatigue. Everything is going to start playing in. The finish is really close. It‰Ûªs not that close in kilometres. There‰Ûªs four days left. Let‰Ûªs try and keep the focus and push." 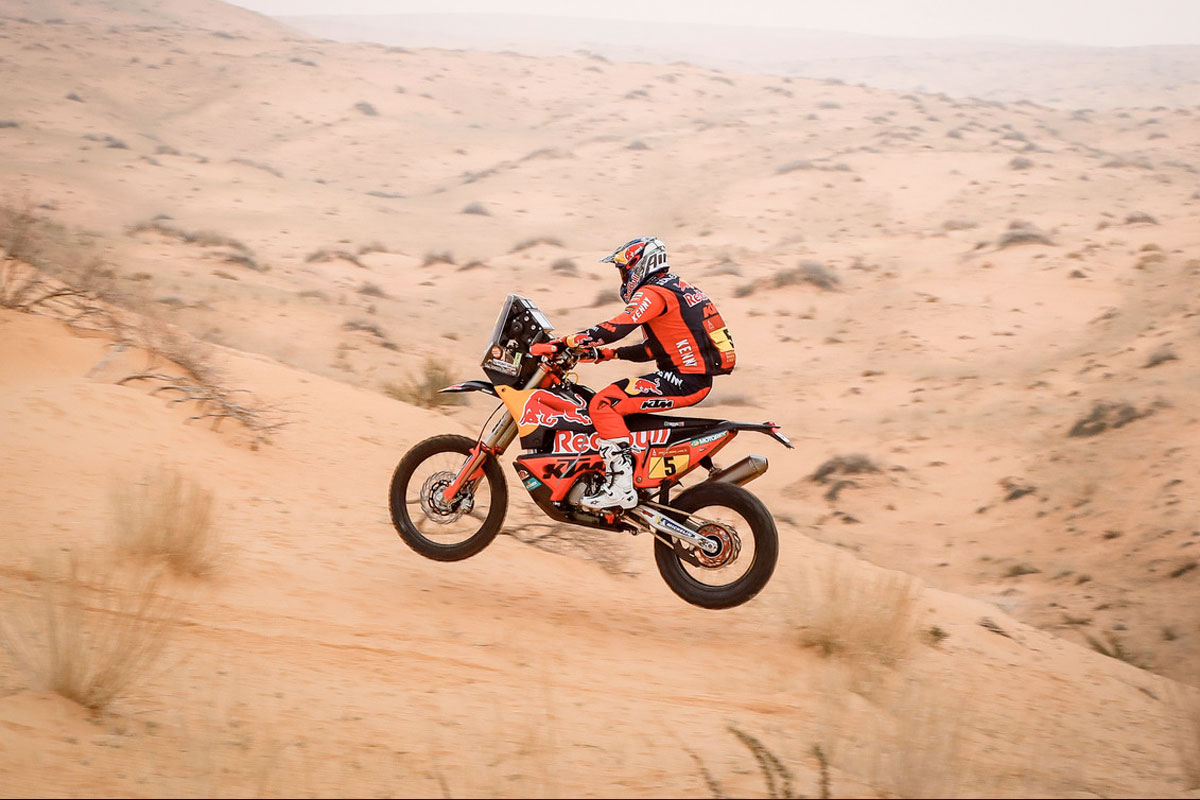 Sam Sunderland remains relatively mistake free and fourth on stage sees him third in the overall rankings, Photo: Rally Zone
Sam Sunderland put in yet another strong performance for fourth despite losing a little time early on, which dropped him down the closely-fought leaderboard to 13th. Sunderland is now third overall, almost six minutes of the lead.

"It looks like my bike is in a bad way, but if you saw the terrain I‰Ûªve been through, then she‰Ûªs looking quite good," Sunderland said. "It‰Ûªs been two day‰Ûªs with the same tyres and wheels with no assistance, maybe around 1600 kilometres. I've got a big dint in my front rim but I‰Ûªm sure quite a few of us have. The speed‰Ûªs really fast and you look down at the road-book to try and navigate and it‰Ûªs just normal that you miss some rocks every now and again. I'm just trying to take it each day as it comes. We've got a long way to go. It's a really difficult race, the pace is super high. " 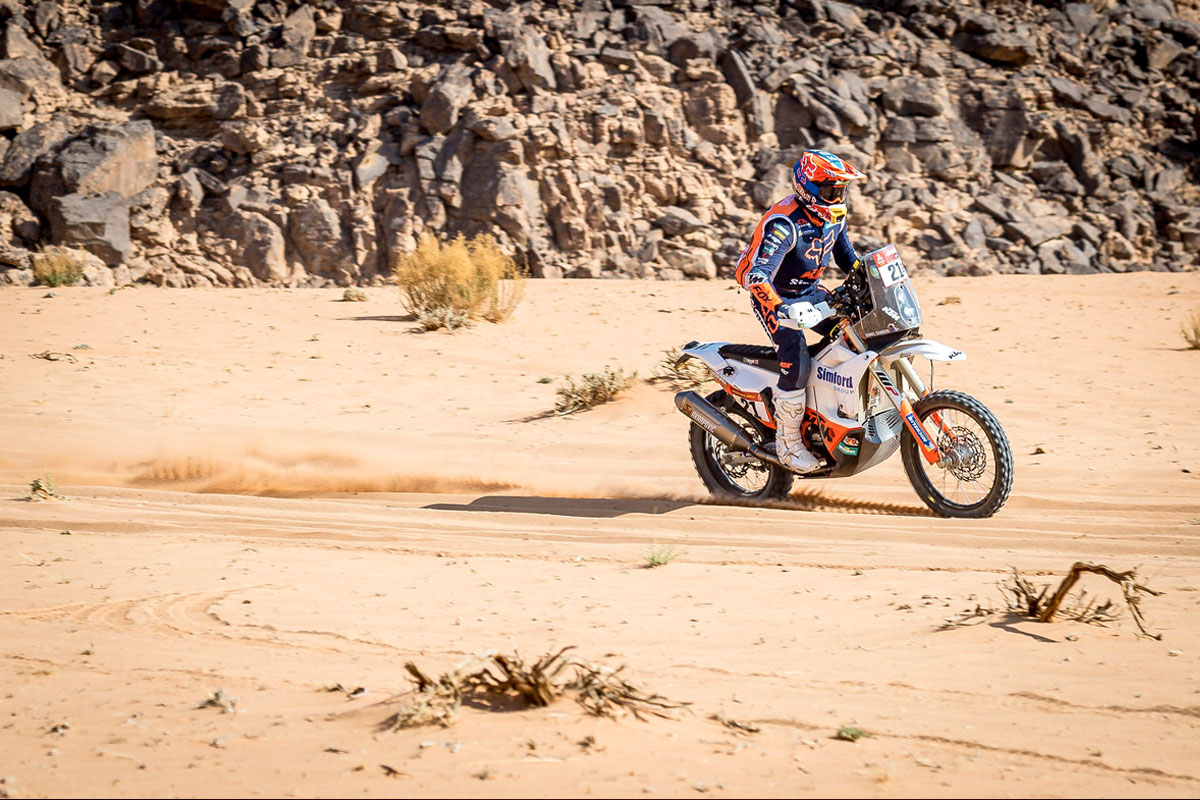 Despite riding with a heap of stitches in his mouth, Aussie Daniel Sanders had another good stage with fifth to remain safely inside the top ten. Photo: Rally Zone
Suffering a nasty fall while cresting a dune on stage seven, Daniel Sanders required several stitches below his lip at the overnight bivouac. Although feeling tired and a little sore this morning, Sanders impressed once again with a superb ride that took him to seventh place on the stage behind Joan Bareeda and Kevin Benavidas. Safely inside the top 10 overall, the young Australian will now aim to get plenty of rest before Tuesday‰Ûªs stage nine.

‰ÛÏI struggled to focus a little today, I think I was a little tired from yesterday and the crash I had," Sanders said. "Thankfully I didn‰Ûªt have any major problems, I just tried to put in a solid ride through the stage. I‰Ûªm glad I‰Ûªm here at the finish near enough in one piece. Both me and the bike have certainly had a tough couple of days, but we‰Ûªll get fixed up now and look ahead to the rest of the race.‰Û 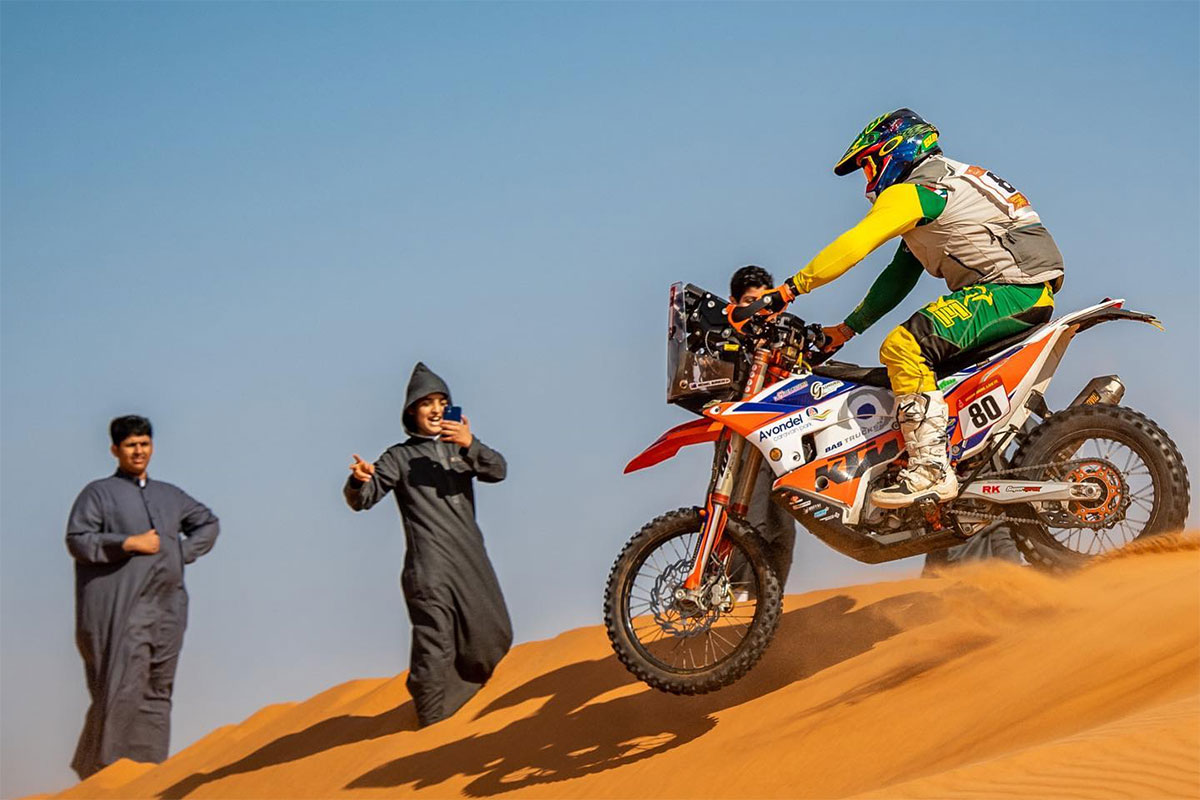 Front runner Xavier de Soultrait suffered a nasty fall after 267 km of the special. The medical team went to his aid. Still conscious he was airlifted to the hospital in Tabuk for X-Rays.

Although relatively short at 579km, day nine at the 2021 Dakar Rally includes the second longest timed special of the event. With a grueling 465km to be raced against the clock, riders will start on the shore close to Neom before covering a looped stage to the north of the city. Predominantly made up of power-sapping sandy tracks and stony pistes, and due to its length, the stage looks set to rank as one of the toughest of the event. 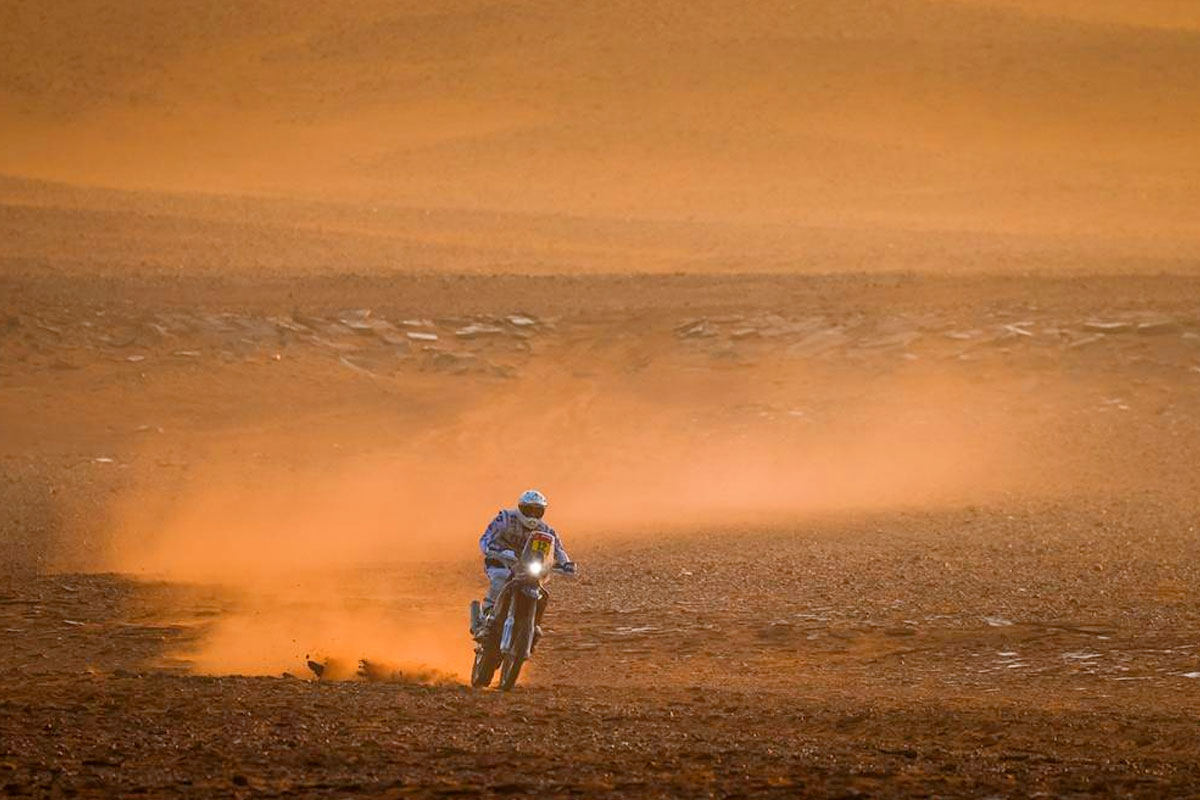 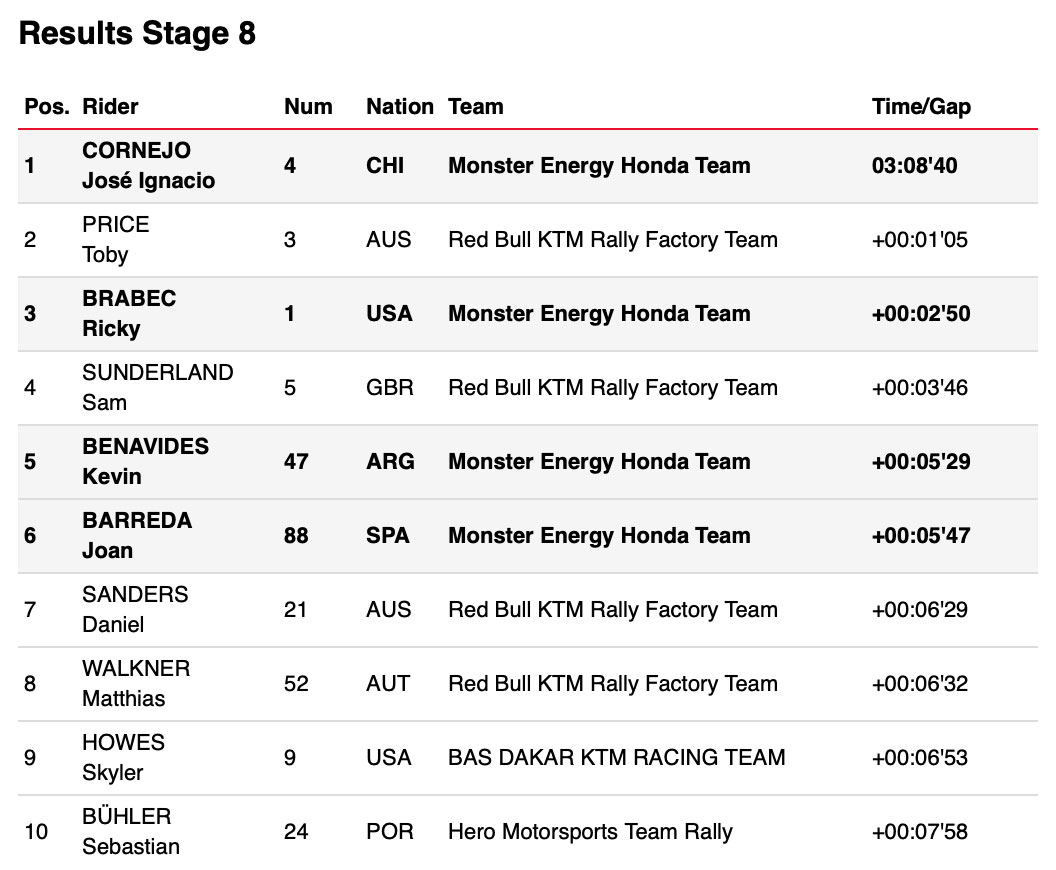 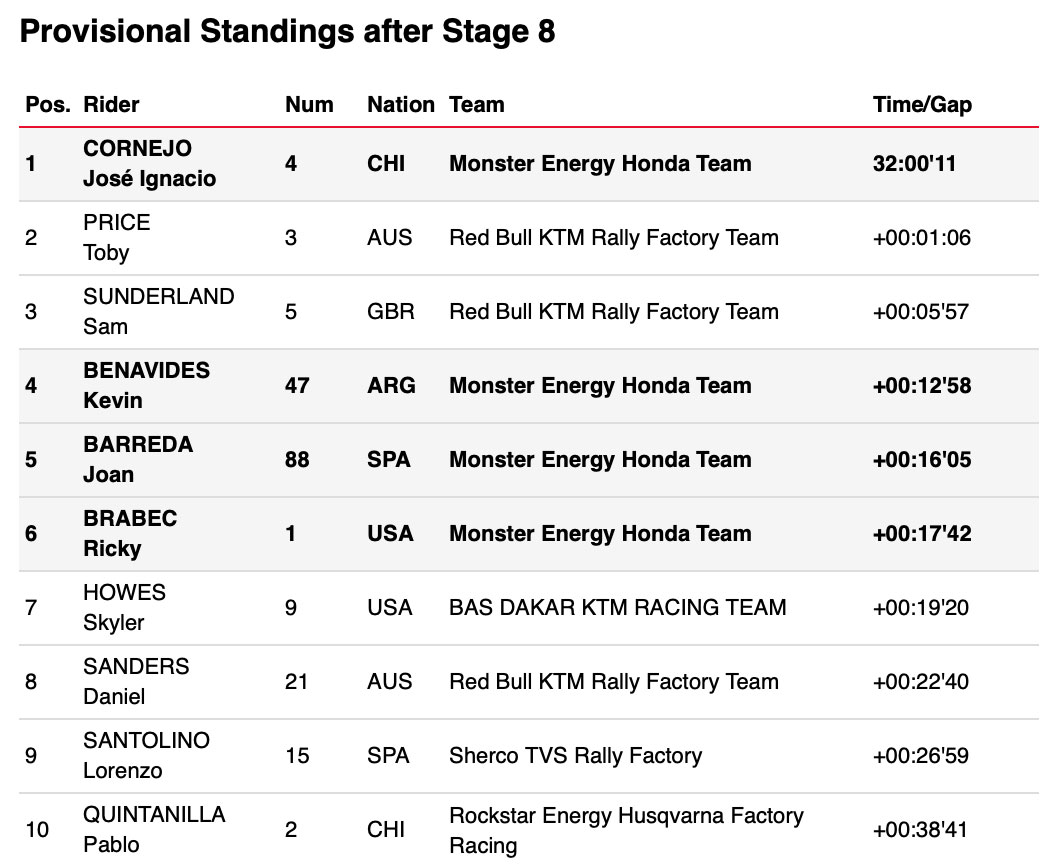