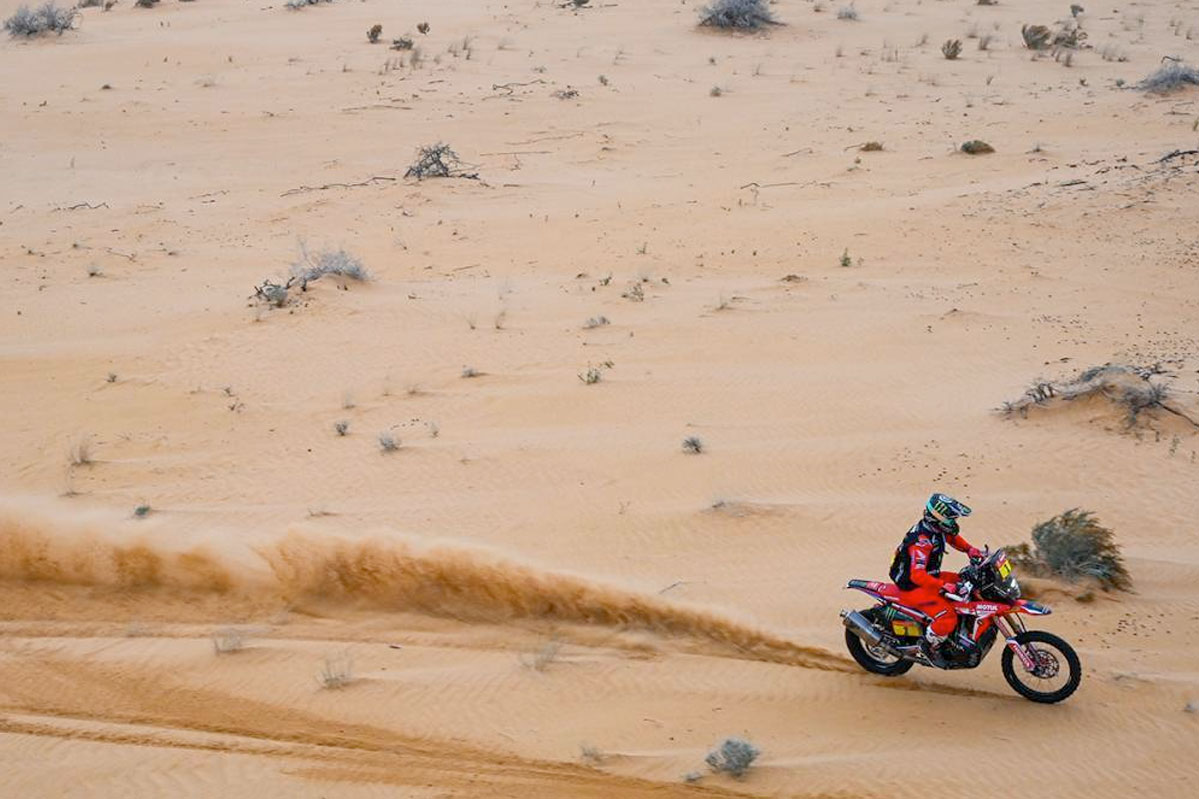 Ricky Brabec took his second stage win for 2021 to gain a few minutes but still has plenty of time to make up.
Defending Dakar Champion Ricky Brabec has won stage 7 of the 2021 the Dakar Rally while his HRC teammate, Nacho Cornejo, claimed the overall lead just one second ahead of Toby Price via second place on the stage.

Heading north from the rest day bivouac at Ha‰Ûªil, stage seven led riders to Sakaka. This first half of the event‰Ûªs marathon stage will see riders sleep in a temporary camp before continuing with the second leg on Monday, stage eight. Arriving at the bivouac, competitors are forbidden from receiving any outside mechanical assistance on their machines and must carry out maintenance and any needed repairs themselves. As such, bike preservation over the entire two-day challenge is extremely important.


It proved a favourable day for Ricky Brabec, who came out determined to play his strongest hand in a bid to keep any end-of-rally options open. The American rider reached the finish-line, registering the best time of the day, to claim a second stage win so far in this Dakar. The current champion lies eighth in the overall standings, 14 minutes behind the race leader.

"Today I had a good day," Brabec said. "I didn‰Ûªt expect to win the stage but I‰Ûªll take it. I started catching Joan by refueling and he was like a 1 minute ahead. When I caught up, we opened the track together to the finish. I open the track tomorrow with my teammate Nacho who finished second today." 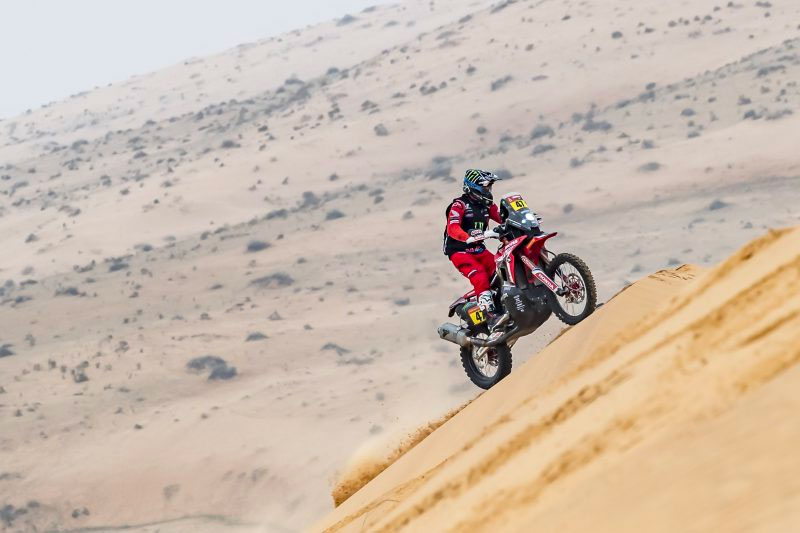 JosÌ© Ignacio Cornejo's second place gave him the overall lead by a single second. Photo: Rally Zone
JosÌ© Ignacio Cornejo also had a noteworthy day. The Chilean ‰ÛÒ a fine navigator ‰ÛÒ finished with the second quickest time of the day and, after almost 29 hours of rallying, becomes the new Dakar overall leader with a single second advantage over Toby Price. The rider from Iquique arrived problem-free at the parc fermÌ© with his bike‰Ûªs tyres still in good condition and will now prepare to tackle the second leg of the marathon stage.

"I‰Ûªve finished the marathon stage well. In the first part I had some problems in the sandy area that was more difficult as it was wet," Cornejo said. "From then on, I managed to find my rhythm. Before getting to the refuelling I had a problem with the tank, I lost some minutes, but I was able to sort it out. After, I went all out to try to make up for the minutes I‰Ûªd dropped. I did not make any navigation errors and was able to recover. I‰Ûªve taken over the leadership in the general standings, so I am very happy. At the moment the strategy is going well, but there are many days left and the fight is very close. So we will continue to take it day by day, as we have been doing up until now." 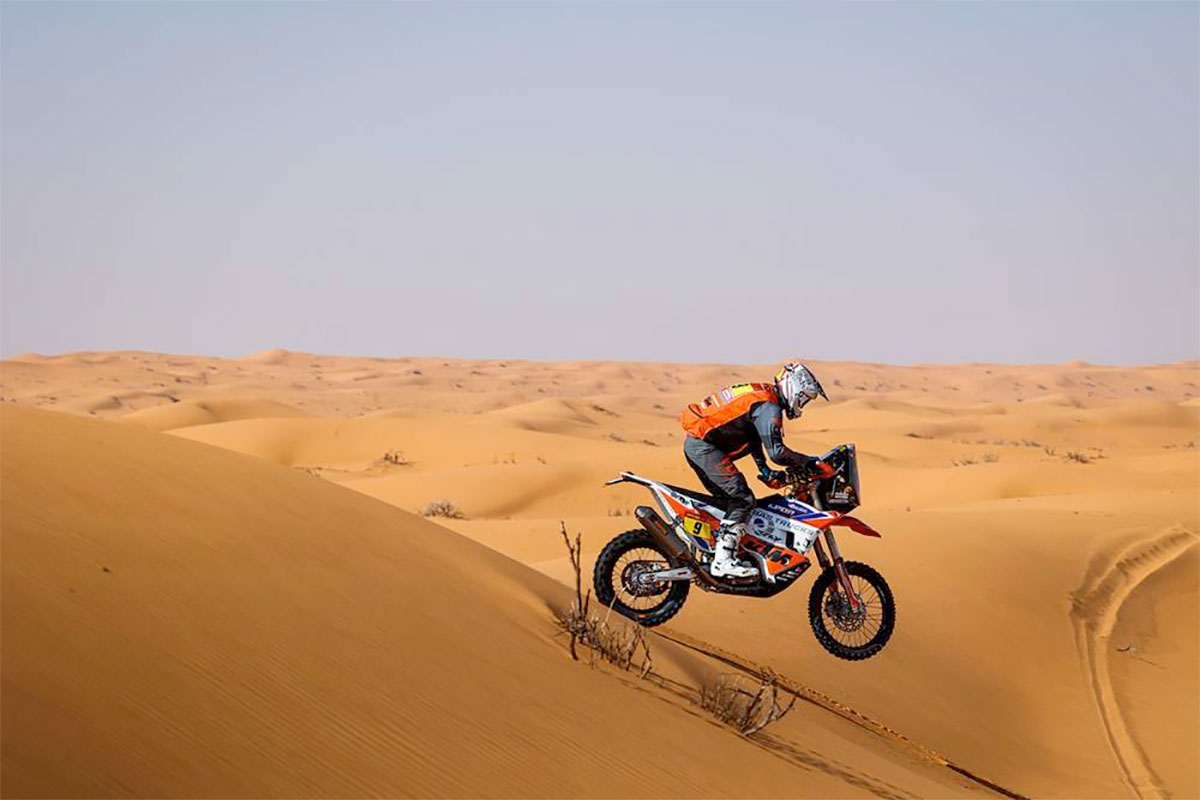 "Things were kinda dicey this morning in the wet camel grass. Felt like I was on edge for the first 100km. A lot of swaps and bucks going on lol," Howes explained. "But after we got out into the desert and the dirt dried up I started feeling good! A lot of the stage looked just like Utah so I felt right at home. Bike is looking good too so not too much work to do. Now time to relax on our floor mattress in a gymnasium." 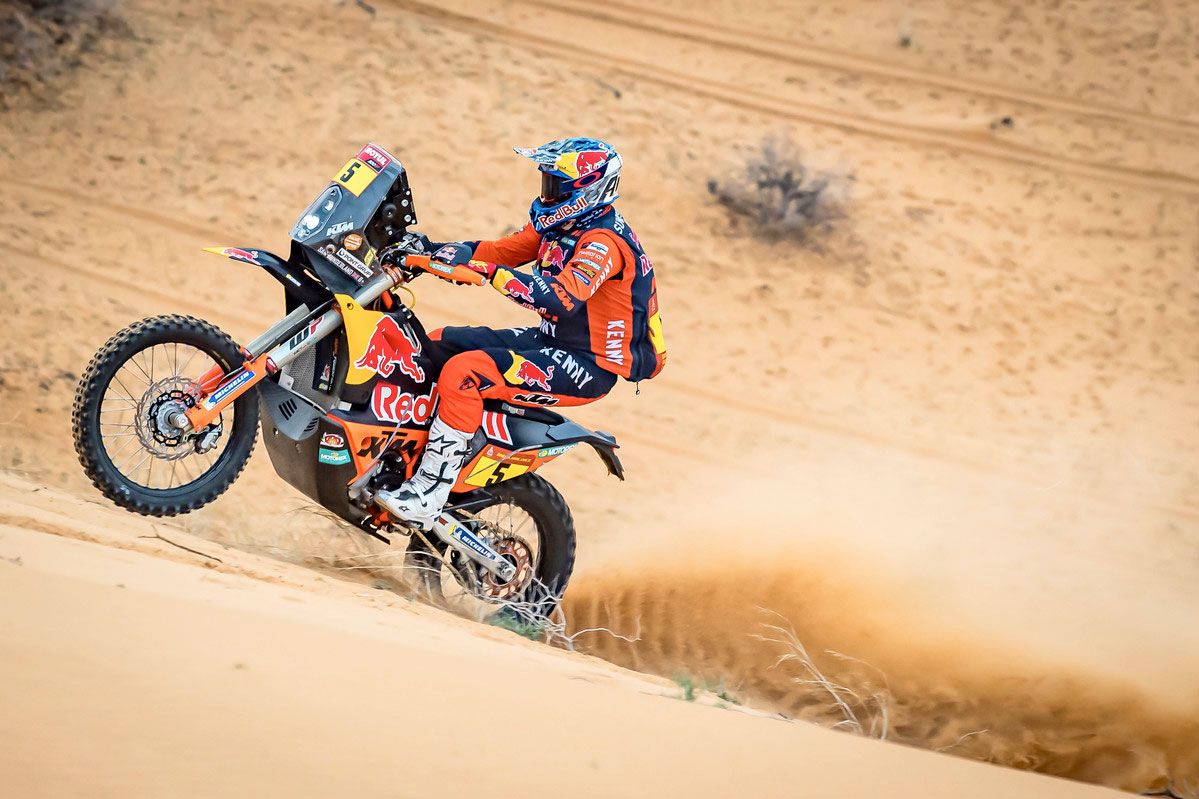 Sam Sunderland spent much of the 453km special on his own and ended the day with the fourth fastest time. Photo: Rally Zone
With Sam Sunderland‰Ûªs tactic of stringing together solid, consistent finishes paying off, the Brit has elevated himself to third in the general overall standings due in part to his excellent performance on stage seven. Racing much of the 453km special on his own, by concentrating on his navigation Sunderland gradually moved up the order as the stage progressed, ultimately claiming fourth at the line.

‰ÛÏIt has been quite a hectic stage today ‰ÛÒ really long and difficult to know where the others are and where you are in terms of time," Sunderland said. "All you can do is keep pushing, but you don‰Ûªt really see anyone else out there for three or four hours. I relied on my own judgement today and it seemed to have paid off. Even when you see the tracks ahead in the sand you have to focus on the road book to make sure you‰Ûªre not making the same mistake as the riders ahead. I‰Ûªm happy with how things went today, feeling good and the bike‰Ûªs in good shape so I‰Ûªm looking forward to tomorrow.‰Û 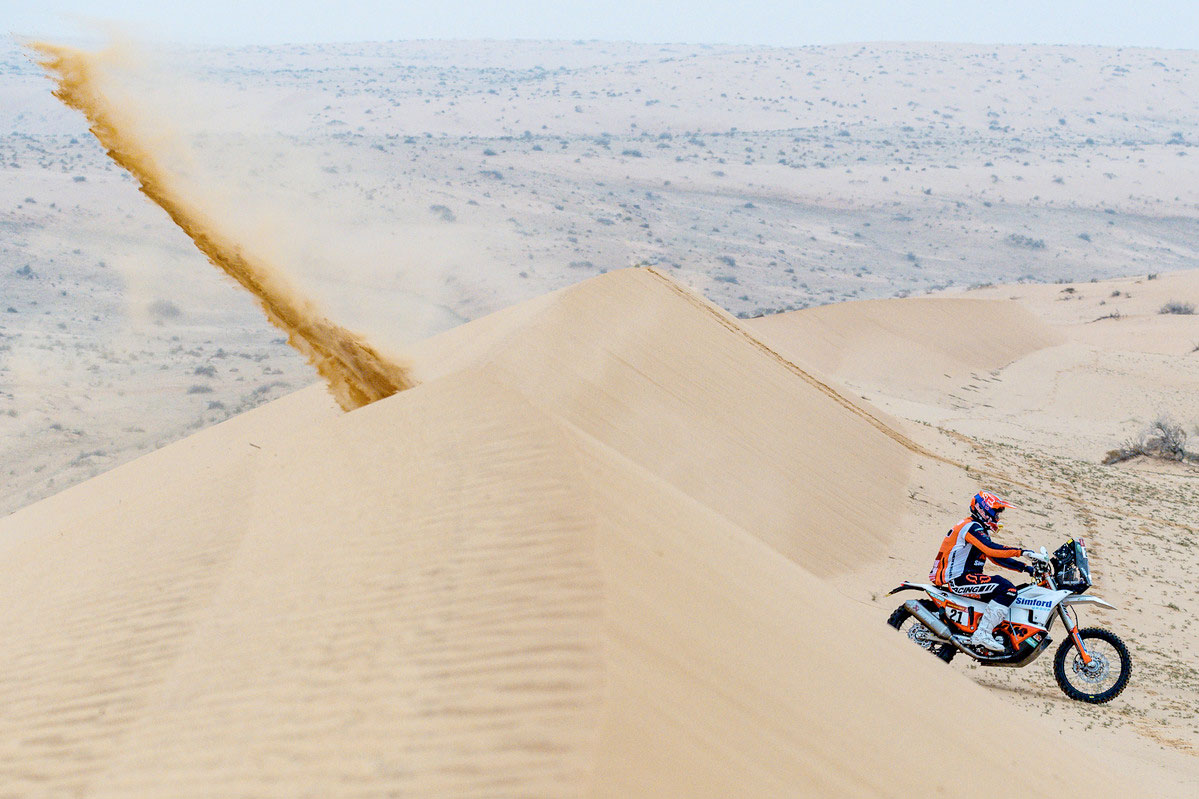 Daniel Sanders' fifth place sees the Australian continue to dominate the rookie class. Photo: Rally Zone.
Continuing to impress, a third-place start position into today‰Ûªs stage meant that rally rookie Daniel Sanders would soon be opening the special. Navigating well and soon passing the two riders ahead of him, the Australian junior delivered an excellent performance that kept him inside the top five for much of the stage. Even a crash over one of the dunes couldn‰Ûªt slow his pace too much and Sanders crossed the line in an impressive fifth place.

Daniel Sanders: ‰ÛÏI was having a pretty good day today until I had about 100km to go. I had been leading out a lot of the stage and was first to one big dune. I knew I had to turn left off the dune and go off piste, but I managed to hit a rock hidden in the sand with my front wheel and it just threw me straight off. I was going pretty fast and I just flew off and went head-first into the dune. Ricky stopped, which was good of him, and after rolling around winded for a bit I was ok. I damaged the bike a little ‰ÛÒ bent the front wheel and bars, but it was ok. Luckily, I was able to charge on to the finish. I‰Ûªll go over the bike and try and straighten it out for tomorrow and then I might need to get a couple of stitches myself.‰Û 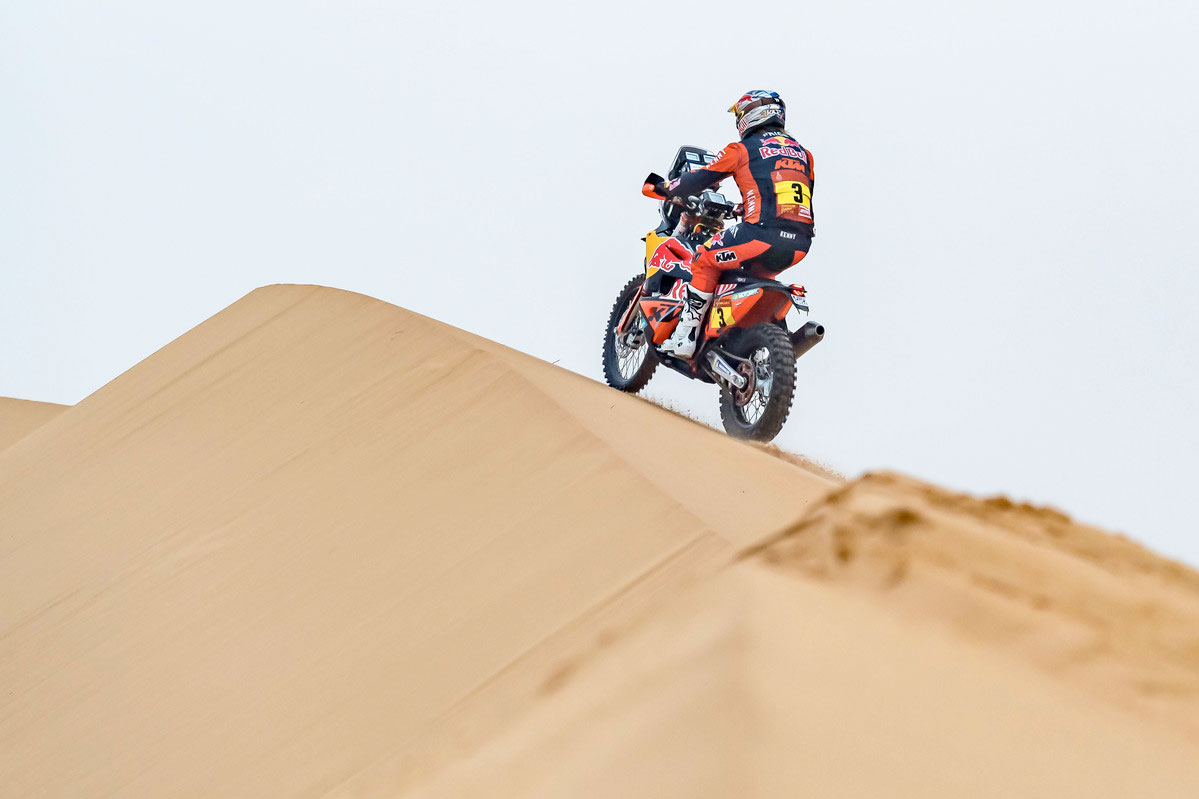 Toby Price made good day with 7th place and dropped to 2nd in the overall only trailing by a single second. Photo: Rally Zone
Toby Price made the most of his seventh-place start position by immediately chasing down his rivals in front to gain as much ground on them as possible. Leading on time for the majority of the special, a small issue in the final section ended up costing the Aussie a few minutes, but he was able to push on to the finish for seventh fastest. Despite losing the lead of the rally, Toby will be the seventh rider to start Monday‰Ûªs second half of the marathon stage, giving him a superb opportunity to once again close in on the riders ahead.

‰ÛÏEverything went well today, I just tried to manage the stage as best as I could and not make any huge mistakes," Price said. "It‰Ûªs been a tough day but I‰Ûªm happy with how things have gone, and it looks like we‰Ûªre in good shape for tomorrow. Seven days done now, but still a fair few to go.‰Û 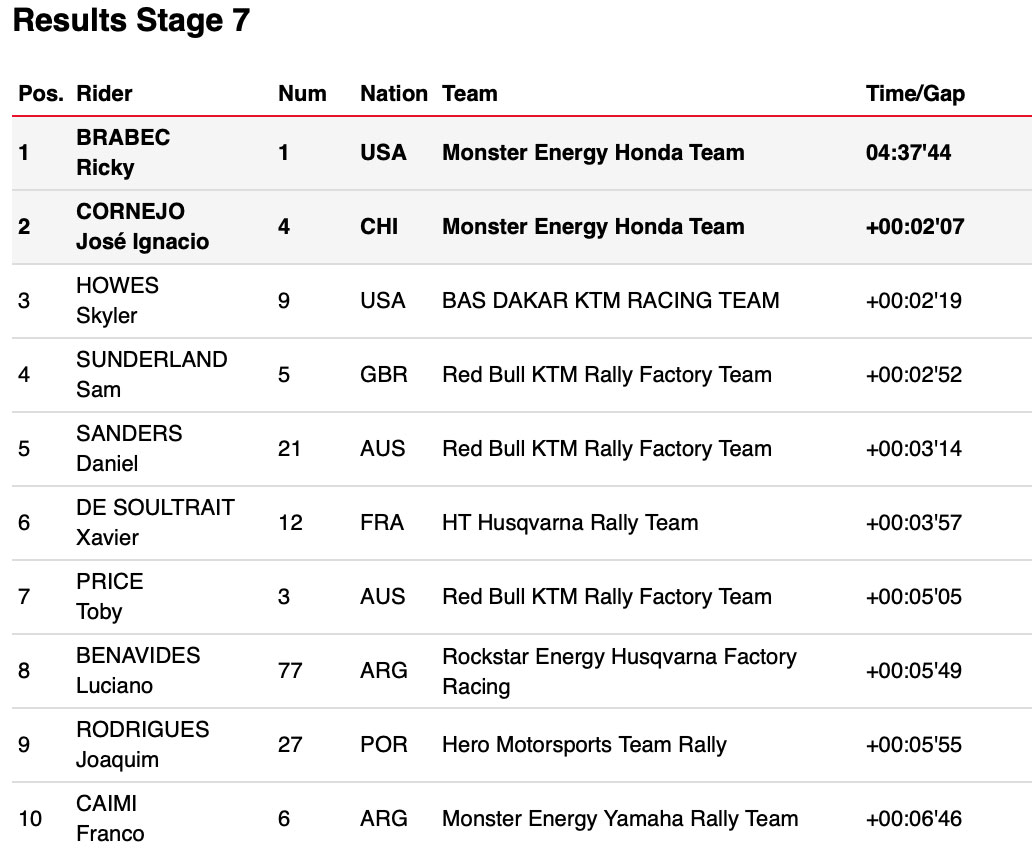 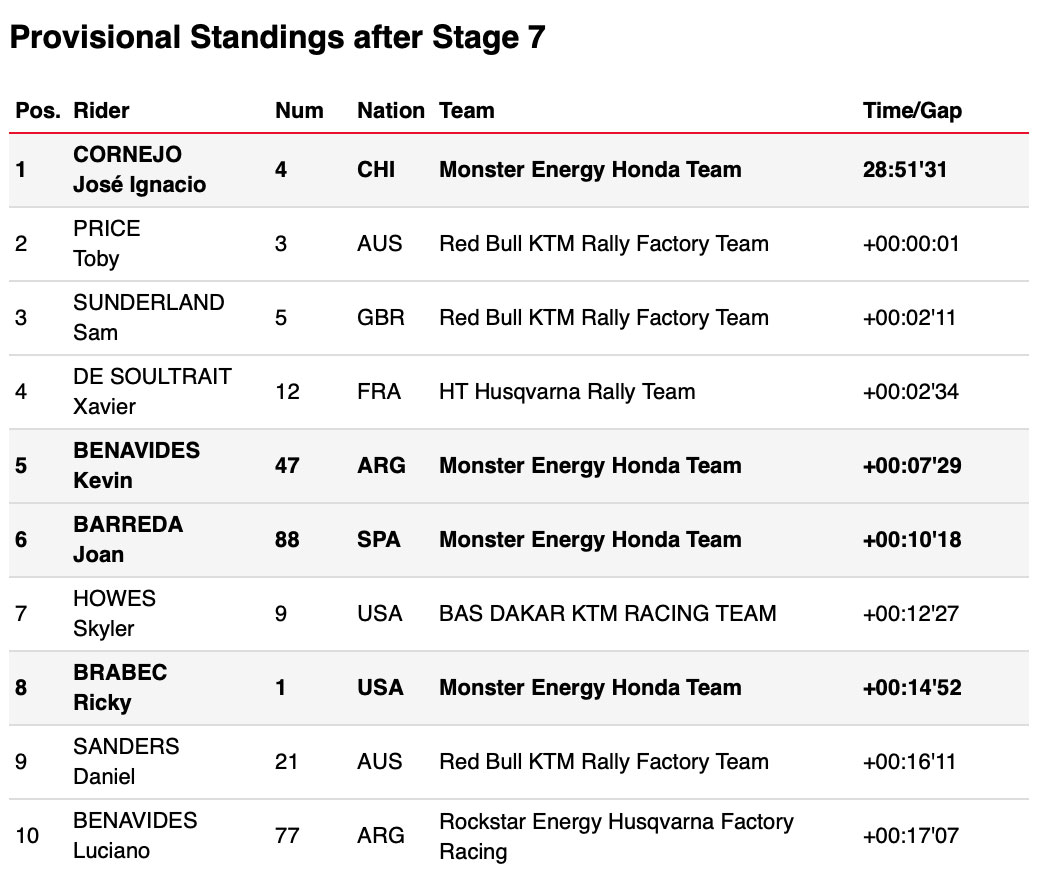