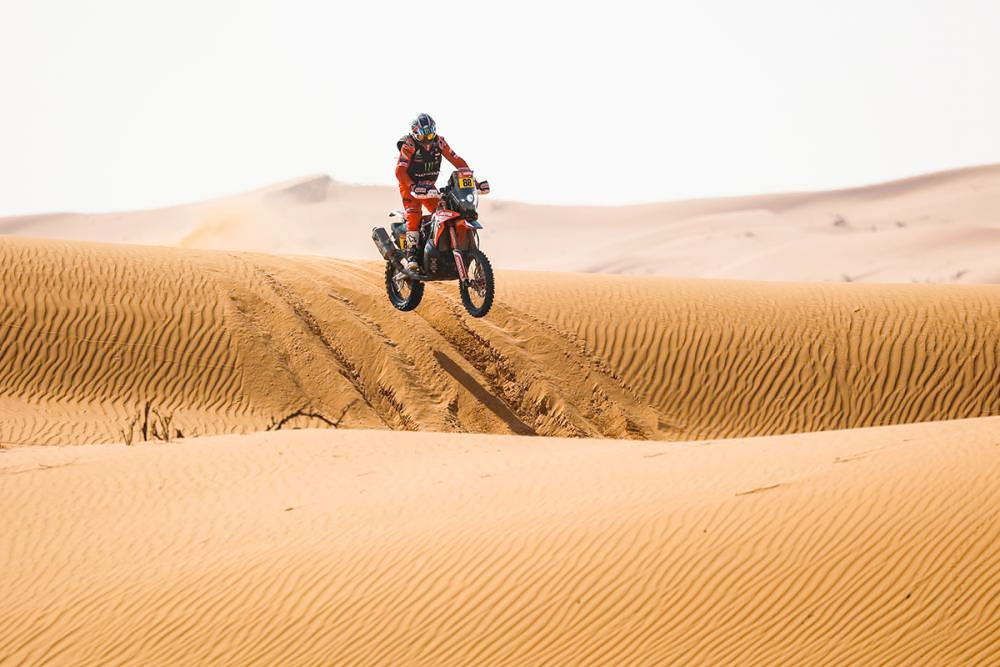 Joan Bareeda took his third stage win of the week and the 27th of his career.
Joan Barreda claimed line honors on stage six of the 2021 Dakar Rally as Toby Price has put in another strong performance with seventh fastest to take the provisional overall lead going into Saturday‰Ûªs rest day.

Ross Branch was second across the line today with rally rookie Daniel Sanders claimed his second top-three result of the event in third. Defending champion Ricky Brabec had a better day with a fourth placing ahead of Sam Sunderland in fifth.

Due to the difficulties encountered in finishing stage 5 by a significant number of competitors, the decision was taken to delay the departure of the riders and crews from the bivouac in Al Qaisumah by 1 hour 30 minutes.

Following Thursday‰Ûªs exhausting stage five, riders were hoping for an easier time on the final special before the rest day. Unfortunately, this wasn‰Ûªt the case. Despite being shortened to 347km from the original length of 448km, stage six truly tested all competitors‰Ûª navigation skills and stamina by delivering a tough day made up of sandy, twisting tracks, before opening out into a mixture of both hard dirt trails and soft dunes.


Spaniard Joan Barreda'a victory was his third stage win of the week and the 27th of his career. He now occupies 7th position, 6 minutes behind Toby Price in the general standings.

‰ÛÏI won! I was trying after refuelling to keep the pace down, but finally I won by a few seconds. With a race like this, I don‰Ûªt know if it‰Ûªs a good strategy," Barreda said of his win.

"But it‰Ûªs like this‰Û_ Now we have one day for resting and we will try to recover as much as possible for next week. It was such a difficult few days with lots of navigation. It‰Ûªs something new for me with this kind of navigation. With already a lot of years' experience on the rally, I‰Ûªve seen a fair bit of navigation before, but this is completely different to what I know.

"Now we have a better feeling with it and I will try to do better for the next week. Yesterday and before yesterday, we had to use one tyre for the second day, worn almost half way down but it was good. Now we still have three more tyres we can use for next week. I'm happy and I'm really proud of how this week went. It has been a strategic race for the first week, and I haven't had the best way. Sometimes it's difficult because you are in one position and you can't do so much, but it's like this. We still have a lot of kilometres left in front of us. We‰Ûªll try to keep safe next week and do a good job. I‰Ûªm really happy because up to now I‰Ûªve kept safe with the bike, had no crashes and I‰Ûªm feeling really strong, so I‰Ûªll try to carry on next week like this‰Û 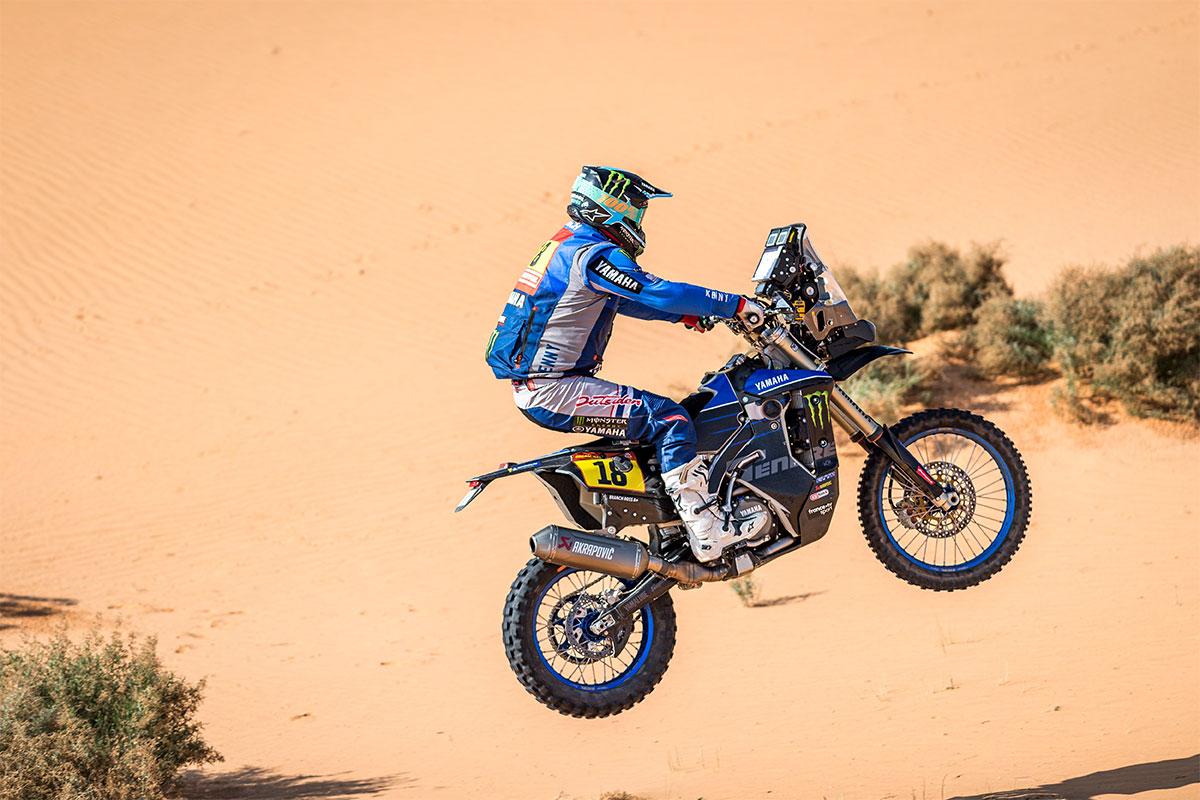 New Yamaha recruit, Ross Branch's consistency has paid off as he now sits 4th overall after finishing stage six in second.
Ross Branch narrowly missing out on taking a maiden stage win. Claiming an impressive runner-up finish, just 13 seconds behind Barreda, Ross is now placed fourth overall in the provisional classification at the halfway point of the rally.

"A really good stage for me today, so close to the win! It was a fun day on the bike," Branch said. "All the sandy tracks meant that I didn‰Ûªt have to rely too much on my navigation and I just went as hard as I could. So close to the win but I‰Ûªm really happy anyway. I‰Ûªm now looking forward to the rest day tomorrow and I‰Ûªm excited for another week of racing." 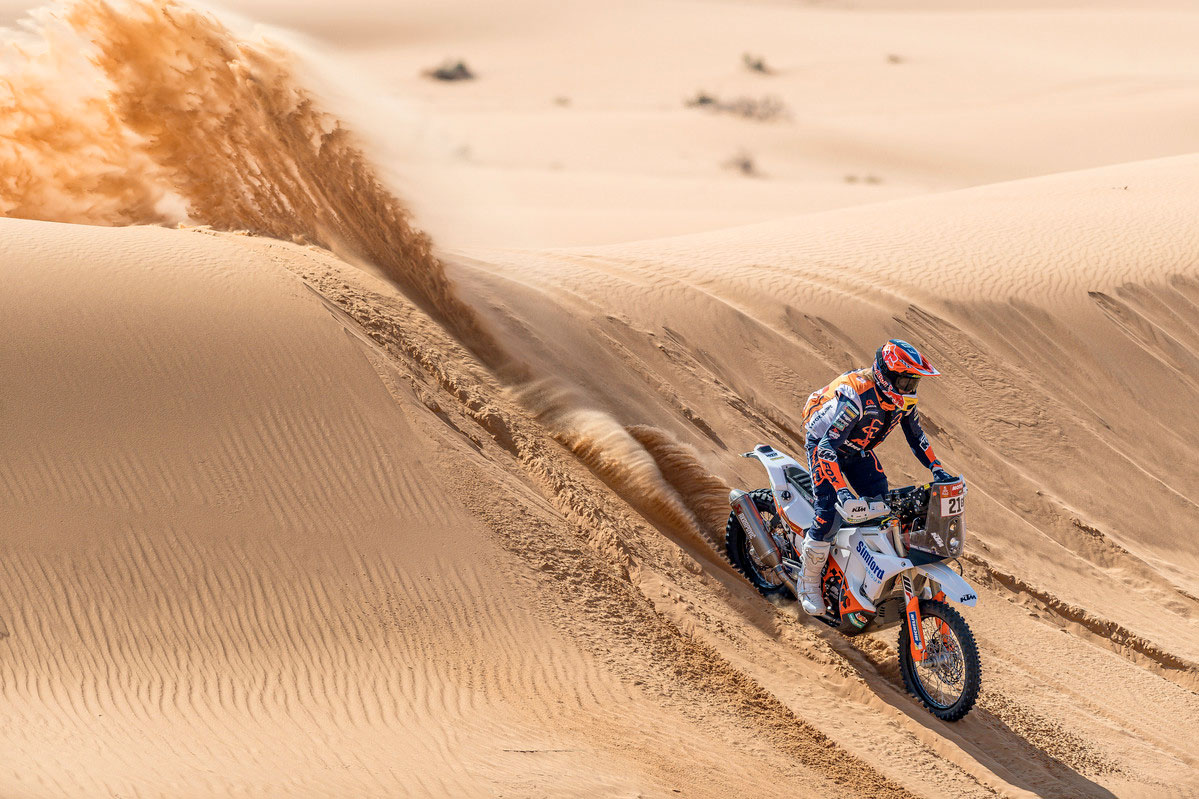 Australian Daniel Sanders took his second podium finish so far in his rookie year with another third place.
Continuing to both increase his cross-country rally knowledge and impress the event regulars Daniel Sanders has once again claimed a top-three finish. With the fast pace and open dunes much to his liking, the young Australian was able to confidently push right from the start of the special and increased his position throughout the 337km to claim third at the finish. Despite a seven-minute penalty incurred early on in the event, Sanders lies in an excellent 12th place in the provisional overall standings and leads the rookie class by close to one and a half hours.

‰ÛÏIt was definitely a physical one today that‰Ûªs for sure, and on top of yesterday, it‰Ûªs been a really tough couple of days," Sanders said. "I tried my best to make up time today and think I did a good job, the stage started off quite tricky and then opened out to be really fast. This first week has gone well, I‰Ûªve certainly learned a lot too, and I‰Ûªm happy with my pace. We‰Ûªve still got a long way to go, but I‰Ûªve been really enjoying myself.‰Û 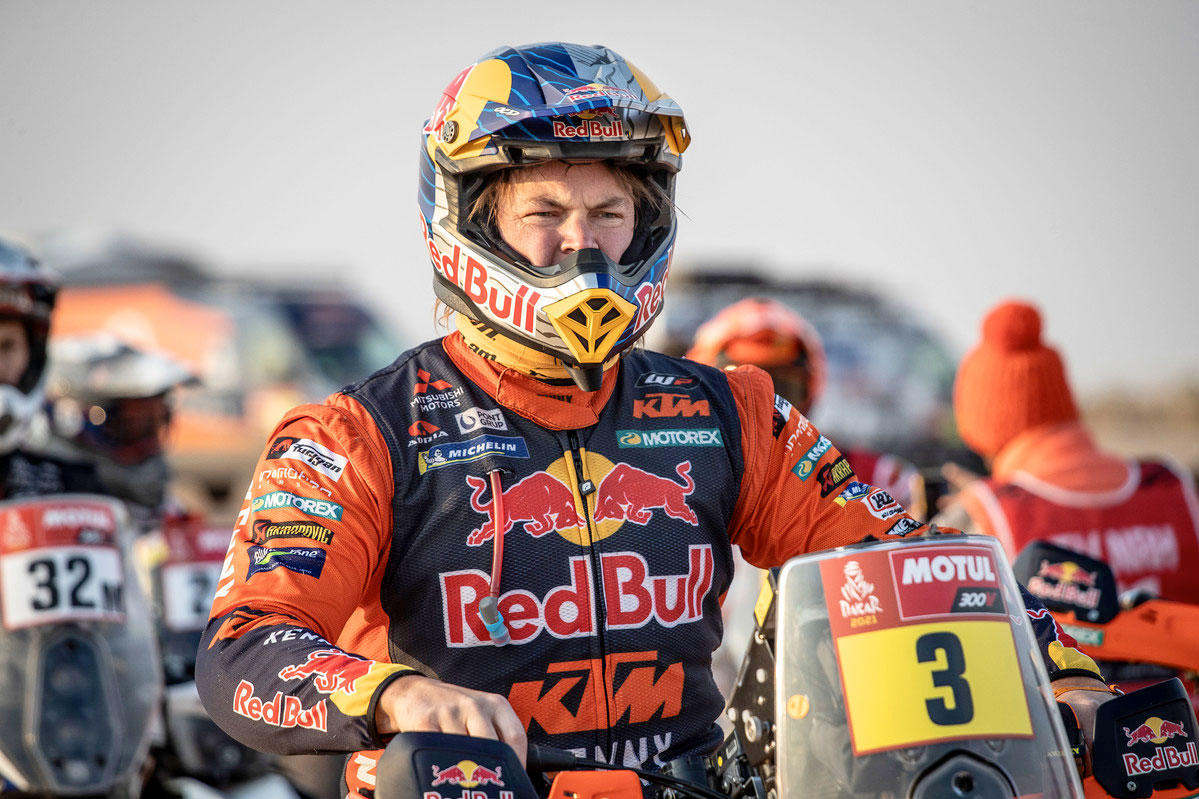 Despite crossing the line 7th on today's sixth stage, Australian Toby Price now holds the lead in the overall rankings
Toby Price backed up his strong third-place finish on stage five with a storming ride from the front on day six. Setting off as the third rider to enter the special, the two-time Dakar champion had caught the two riders ahead of him by kilometer 100. Riding in a group of three from there to the finish, Price was able to find a solid rhythm and navigate through the dunes without major issues. With his seventh-place result, Toby lost the very minimum of time to his rivals, completing the special less than four minutes down and in doing so takes the lead of the 2021 event.

‰ÛÏToday they cut about 100km out of the stage and that definitely helped us because it‰Ûªs still been a really tough day out there," Price said. "It took a while, but I managed to catch the two guys ahead of me and luckily we were able to keep up a really good pace right at the front. I did have one little get-off that twisted the road book tower a little bit but apart from that there were no problems. It feels great to have taken the overall lead, but after such an up and down week the most important thing is we‰Ûªre fit and in good shape for the second half of the rally. The plan now is to enjoy the rest day and then hopefully more of the same next week.‰Û 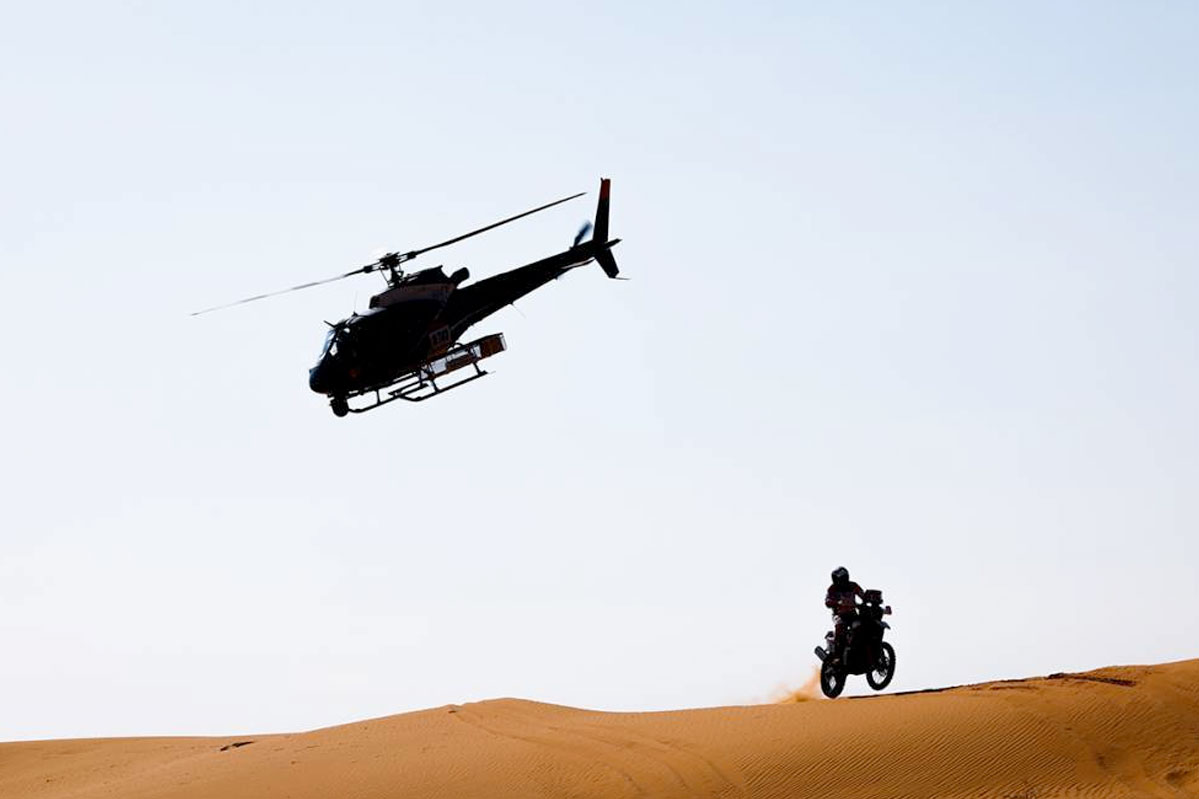 In the desert with your mates! 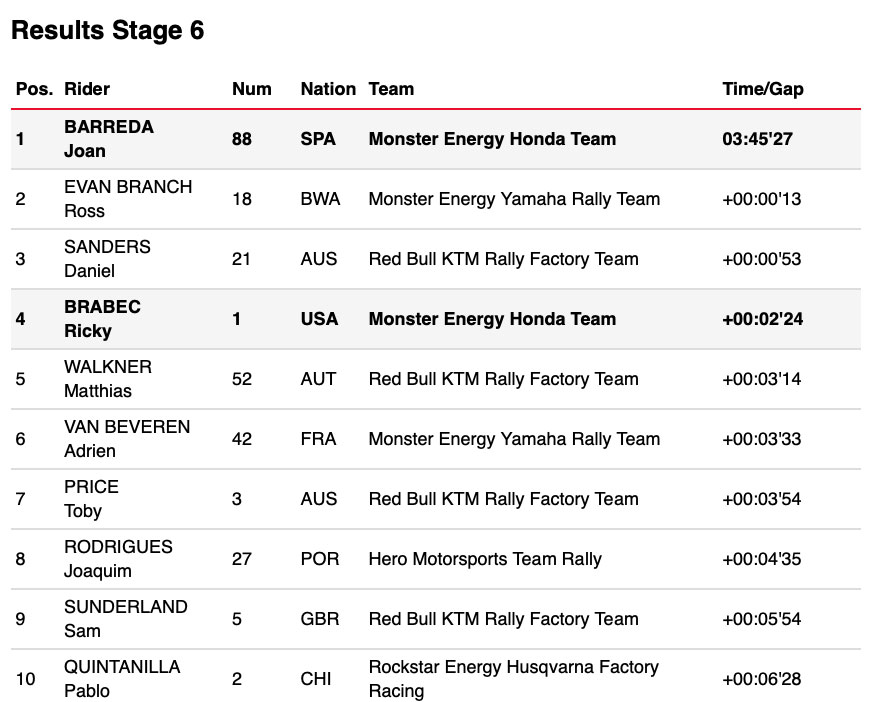 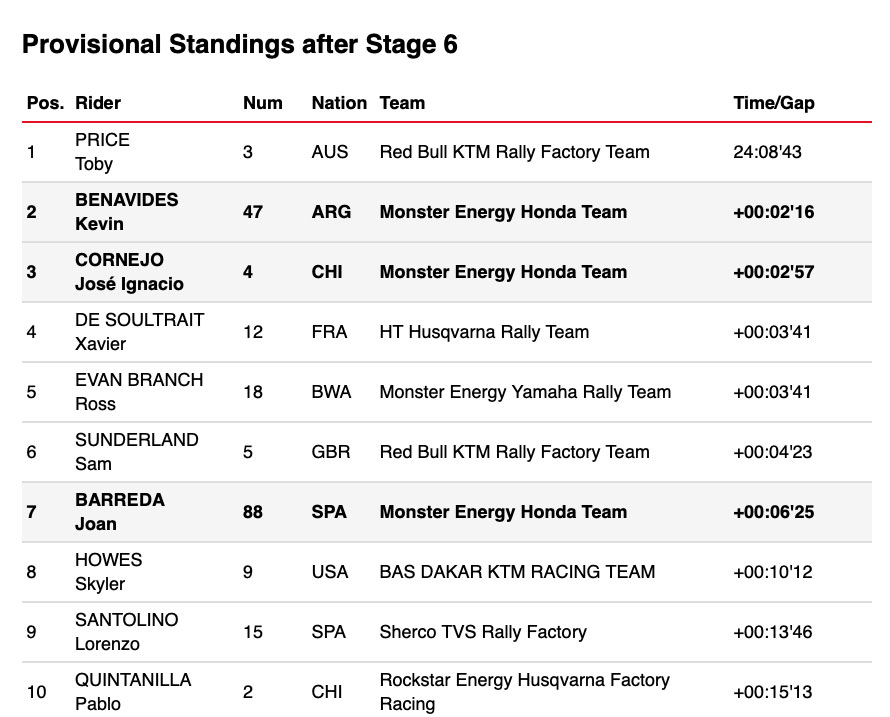