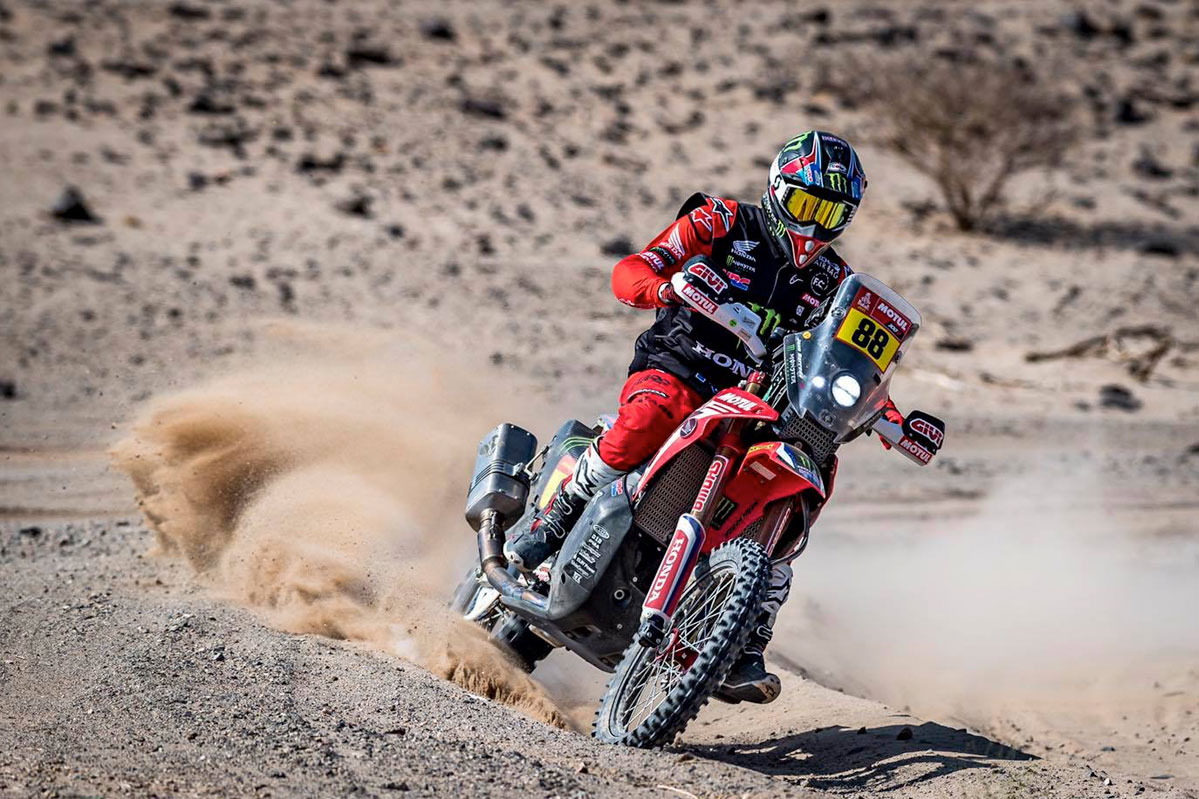 Joan Barreda claimed his second stage win and is now second overall.
Joan Barreda has claimed victory on stage four of the 2021 Dakar Rally ahead of Ross Branch and Australian Rookie Danial Sanders as riders complete the longest stage.

Yesterday's stage winner Toby Price finished 22nd and dropped 14 minutes after opening the stage and making some small navigational errors. American privateer Skyler Howes dropped from to fifth in the overall standings after holding the lead at the conclusion of yesterday's stage three.

Stage four was the longest of the event at 813km, was billed as being less demanding on navigation than the previous few days. Comprising a 337km timed special, book-ended by long liaison sections, the route ultimately led competitors into Riyadh, the capital of the country. With the majority of the day consisting of fast, wide-open tracks across the desert, riders‰Ûª focus and skill were tested to the maximum, with a safe stage finish a priority.


Joan Barreda took advantage of his 30th-position start to attempt to close the gap as much as possible on his rivals. The Spanish rider set a scorching pace to claim a second triumph in this Dakar, with the rider from CastellÌ_n taking his stage-winning tally to 26. Overall, Barreda holds second place, a mere 15 seconds behind the new leader De Soultrait.

"It was another good stage. I started very far back because of my result yesterday, but that's the way it is in this Dakar, you're either at the front or far back," the Spaniard said. "We need to keep it up. I've used three tyres so far. I think the one I used today is quite worn, but I was supposed to use it for three days, so it's not great news. But we'll see what we can do in the coming days." 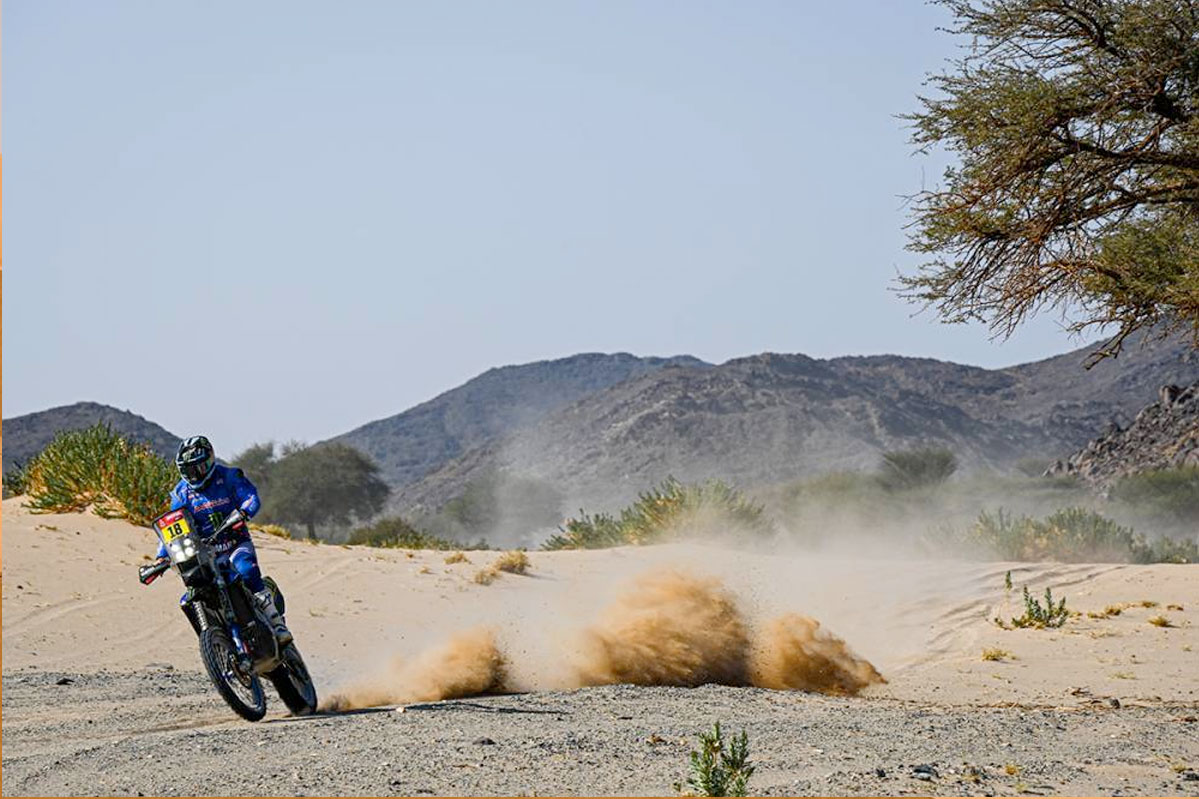 "I had fun. I was a bit frustrated after I missed a waypoint from the get-go this morning. Then, I wanted to see how fast I could go and find out what my bike's top speed was. Yamaha has done a great job with the bike and it's really fast, I'm not aiming to ride that fast. I need to stay consistent throughout the remaining stages to see how it all plays out," Branch said. 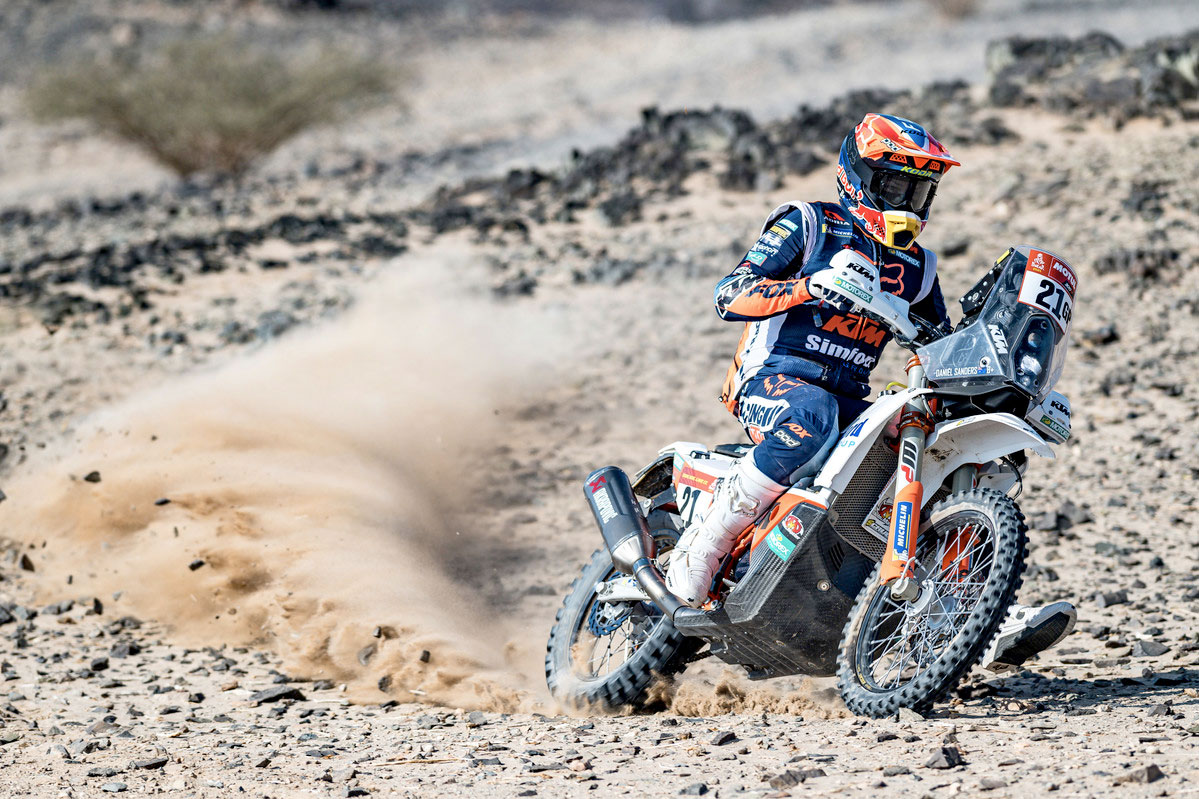 Daniel Sanders took his first tope three finish with third in his rookie year. Photo: Rally Zone
One rider who did push hard over the entirety of the special was Daniel Sanders. Finishing the stage in third the 26-year-old rally rookie was the eighth rider to enter the stage following his strong performance on day three. Finding the high average speed special much to his liking, Sanders was able to successfully chase down his rivals ahead and make up good time. With four strong stage results under his belt, in what is his debut Dakar Rally outing, Sanders goes into Thursday‰Ûªs stage five provisionally lying 14th overall and as top rookie.

‰ÛÏToday went really well, I didn‰Ûªt have any issues for the first 100km or so and was able to close in on the front pack of riders," the Australian explained. "I had a strong middle section, I just kept pushing and was able to correct a couple of mistakes that the guys out front made, so that put me up on time a little. When we hit the dunes, I did have one big crash and got stuck on one too, luckily both myself and the bike came out fine. Towards the end I was able to push on again and apart from one little mistake things went really well. I‰Ûªm really happy with third and thankfully it means I don‰Ûªt have to lead out tomorrow either.‰Û 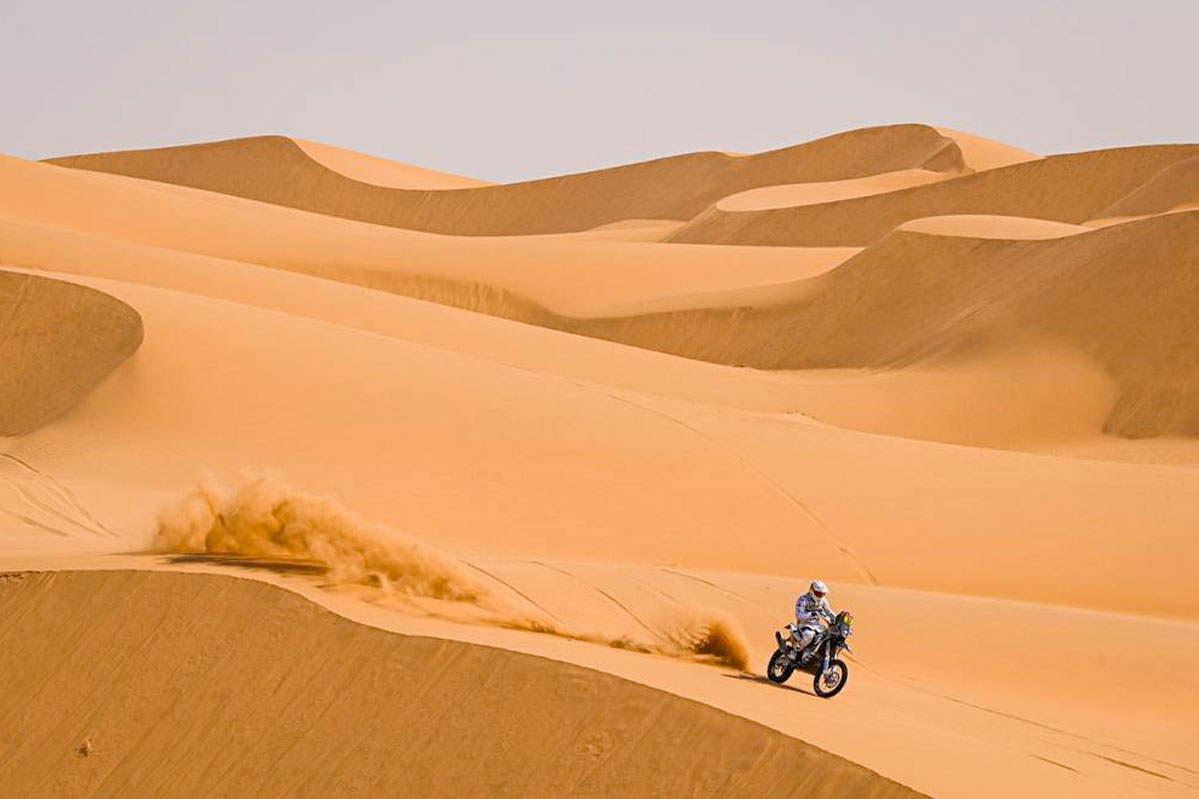 "It's difficult to open up large gaps in stages like these. We'd have to attack like a madman, but we're already going very fast. I again reached 175 km/h today. I could go faster, but I don't feel like it. You also need to follow the roadbook... At any rate, my pace is really good," De Soultrait said. 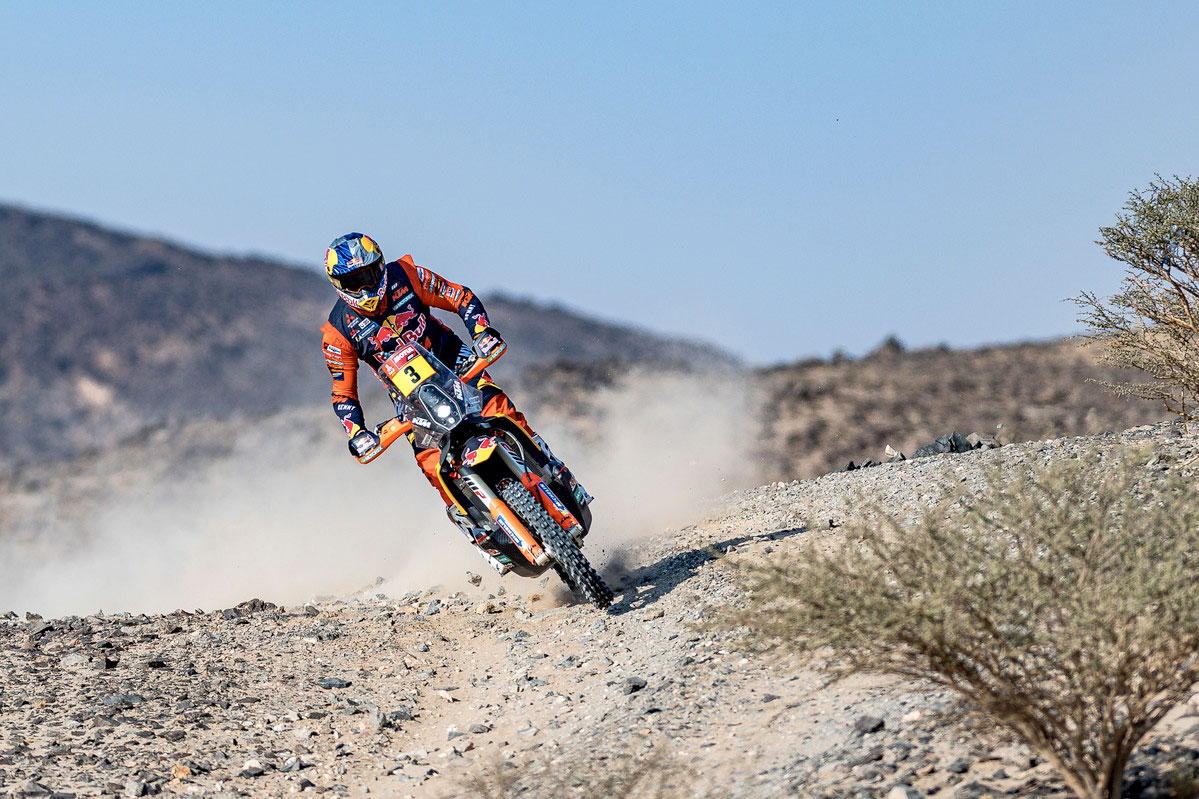 Yesterdays winner Toby Price was another to fall victim to opening a stage with the two time champion coming home just outside the top 20. Photo: Rally Zone.
Toby Price had the task of opening a second stage of the following his win on Tuesday. Leading out and pushing from the start, Price was fastest to the checkpoint at kilometer 43. A couple of navigation errors however, made later through the special, unfortunately ended up costing him some valuable minutes. Completing the remainder of the day just outside the top 20, Price didn‰Ûªt lose too much extra time on the eventual stage winner, ultimately finishing 14 minutes down. In the general rankings, the Australian sits in eighth place.

‰ÛÏYeah it wasn‰Ûªt a bad stage for me ‰ÛÒ for sure it was a little easier than on previous days in terms of the navigation, but I managed to make a small mistake after the first checkpoint and was caught by the rider behind," Price explained. "After kilometer 80 we pretty much rode the rest of the stage together, trying to stay out of each other‰Ûªs dust. I made a couple more small errors later on, which cost me a few minutes, but on the whole, it was a solid stage and I‰Ûªm happy with the result.‰Û 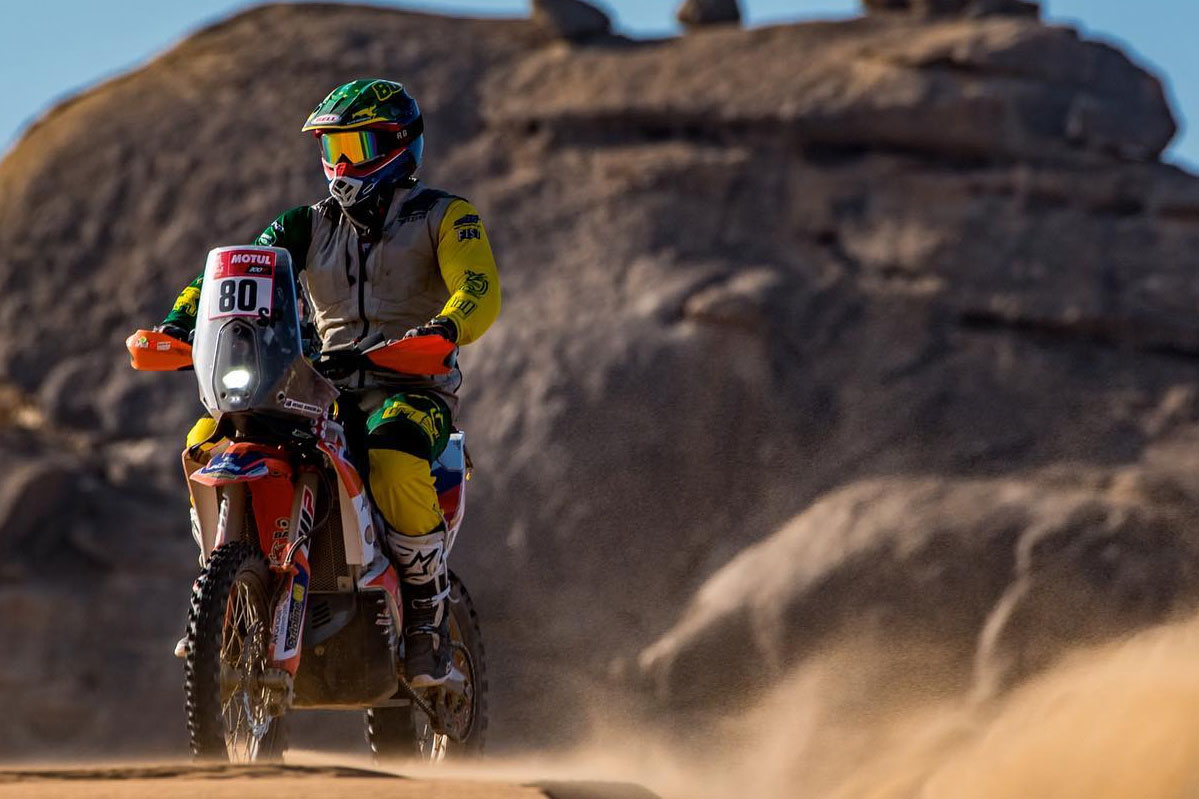 Aussie privateer Michael Burgess moved up two spots in the rankings to 38th place overall in an impressive debut.
Australian Michael Burgess was once again consistent finishing 34th and now moved up two spots in the overall rankings to 38th overall. "I got the job done but that‰Ûªs it. In the 5 days I have experienced most elements of Dakar and it‰Ûªs a rude shock to how harsh it really is, yes there is a really good side to it for sure but today makes you want to be with your family," the Destination Dakar Roadbook Adventures rider said.

The fourth Australian Andrew Houlihan finished 63rd and also moved up the overall rankings to 67th.

Looking set to be another technically demanding stage for the riders, day five of the 2021 Dakar Rally covers a total of 662km, of which 456km are timed special. Made up of a variety of terrain, including stony tracks and a tough, dunes sector midway through the route, the stage will reward accurate navigation from the very start. 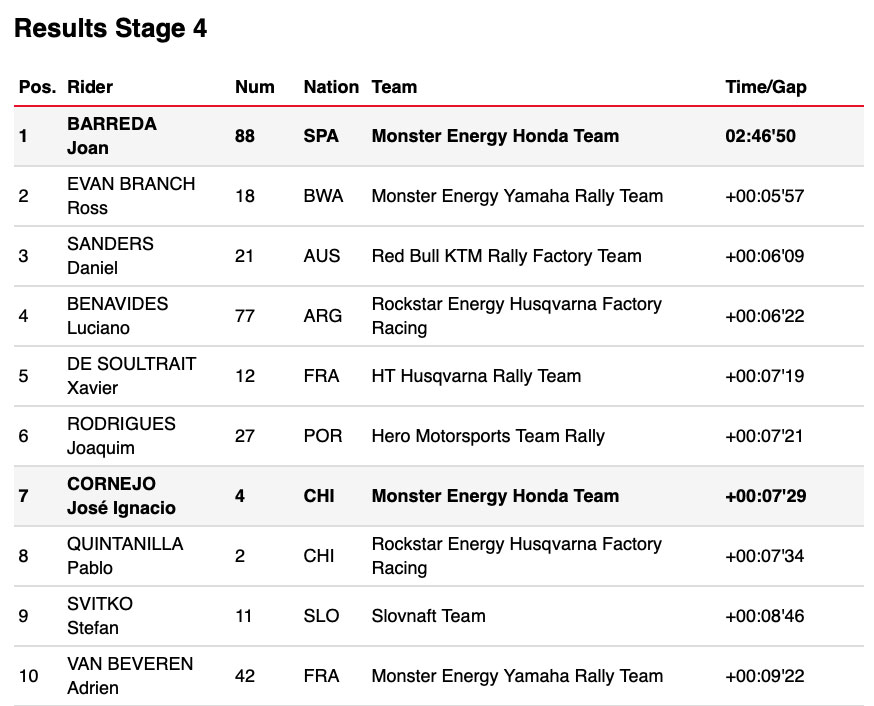 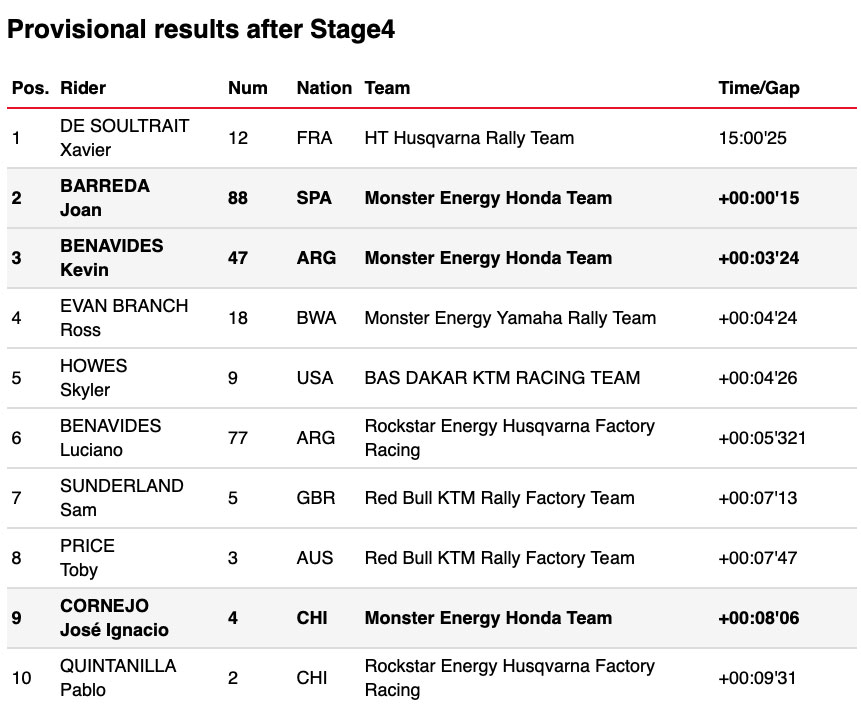