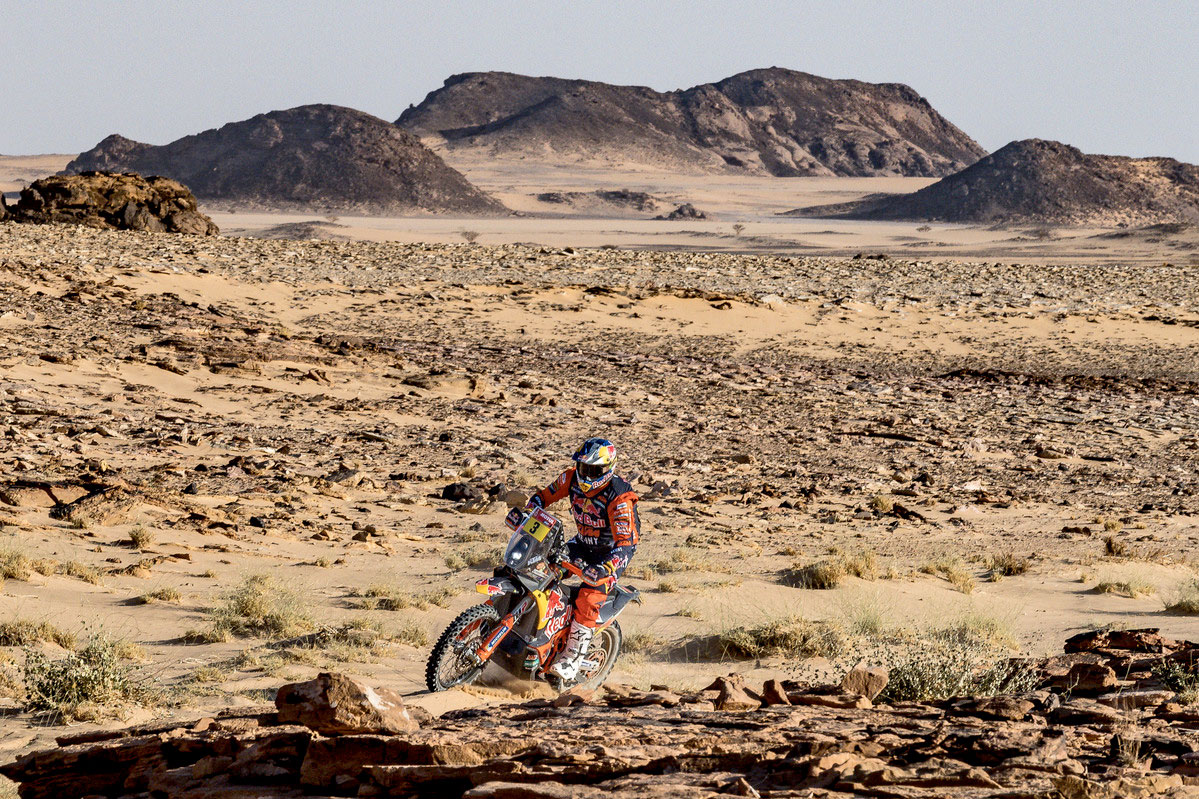 Totaling 629km, stage three of the 2021 Dakar Rally formed a looped stage with its 403km timed special taking place south of the bivouac at Wadi Ad-Dawasir. Riders faced another tough day of navigation and varied terrain, with soft sand dunes once again forming the first half of the special, before opening out into faster, sandy tracks.

Starting down in 29th was always going to be tough for Toby Price, with the Australian having to catch and pass several rivals ahead in order to make up time. Using his formidable cross-country rally experience, he was able to push hard right from the off, making light work of the tricky-to-navigate dunes near the start of the stage, before subsequently making up even more ground on the faster, desert tracks towards the finish. Clawing back valuable minutes on his competitors and claiming a 13th career Dakar stage win, Toby now sits third in the provisional overall standings, less than one minute down on the current leader.


‰ÛÏEverything went well today ‰ÛÒ no crashes, the bike has been good, and I was able to find a good rhythm," Price said. "It‰Ûªs great to win another stage, but it‰Ûªs a bit like a yoyo at the moment ‰ÛÒ it‰Ûªs difficult to lead a stage out from the front as you can lose a lot of time, and then you have to push hard the next day to make it all up again. Hopefully one day we‰Ûªll catch a bit of a break, the navigation won‰Ûªt be too tough, and I can stretch things out from the front. Right now, every day is crucial, and I think if it carries on like this, with everyone staying fit and their bikes working good, the battle for the win is going to go down to the very last day.‰Û 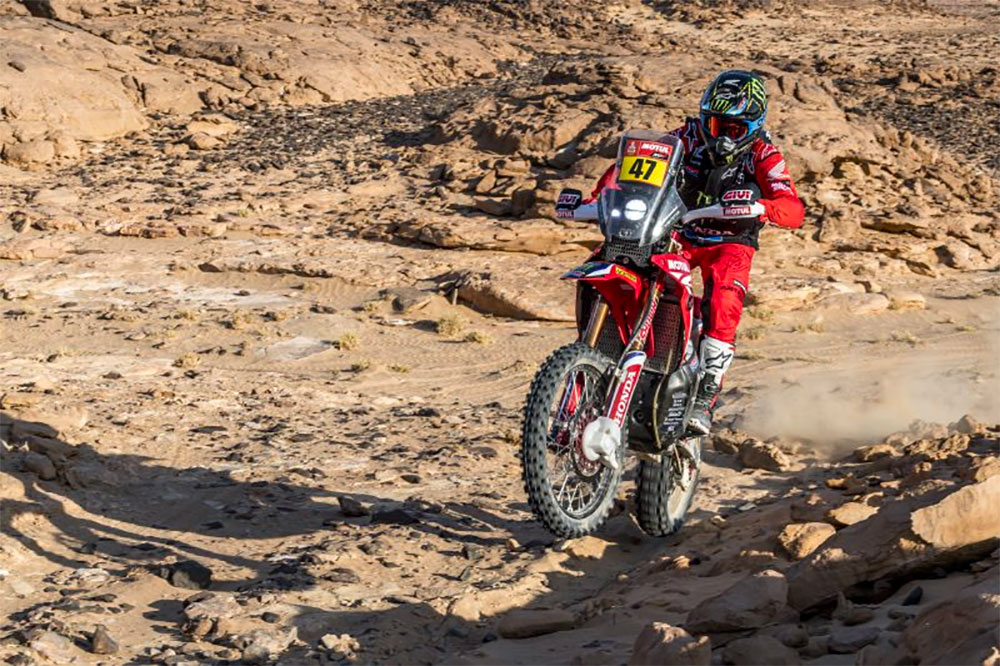 Second place at the end of the first looping stage went to Kevin Benavides. Photo: Rally Zone
Argentinean Kevin Benavides was 2nd on today‰Ûªs stage and is also 2nd in the general standings, a little more than thirty seconds behind Skyler Howes.

‰ÛÏToday was a nice day. I started at the back, but I kept focused all day and pushed a lot. I think I did a good job. I don‰Ûªt know the results yet, but I feel good, so that was okay for me. This Dakar is really different than before. Now we are some days at the back, some days at the front. Maybe tomorrow I‰Ûªll have to open or something, but, for sure, this Dakar is like a game of strategy. I feel so good with the bike and strong, so I'm just calm. My strategy is to take it day by day," Benavides said. 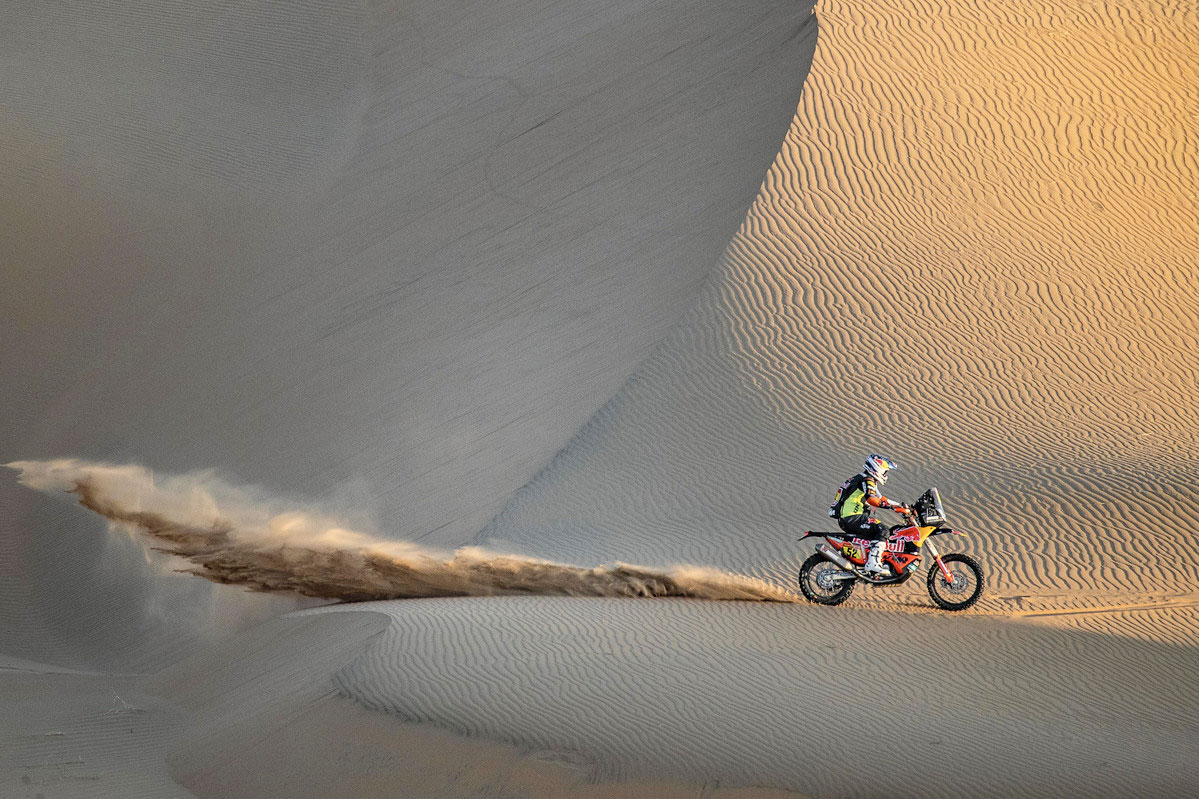 Matthias Walkner delivered strong ride, finishing in third. Photo: Rally Zone
After suffering a technical issue on Monday‰Ûªs stage two, Matthias Walkner was the 32nd rider to enter today‰Ûªs timed special. The Austrian put in a great ride, moving into the top three straight away, a position he successfully defended to the finish.

‰ÛÏIt was quite a nice day today, but so, so fast ‰ÛÒ I think for 70 or 80 percent of the day I was flat out," Walkner explained. "There was a good mix of fast tracks and tricky navigation, but in general, I enjoyed the stage. Obviously, I‰Ûªm still disappointed after losing so much time yesterday and it‰Ûªs going to be hard to improve my position in the overall, but my plan is to take each day as it comes now and do the best for myself and the team.‰Û 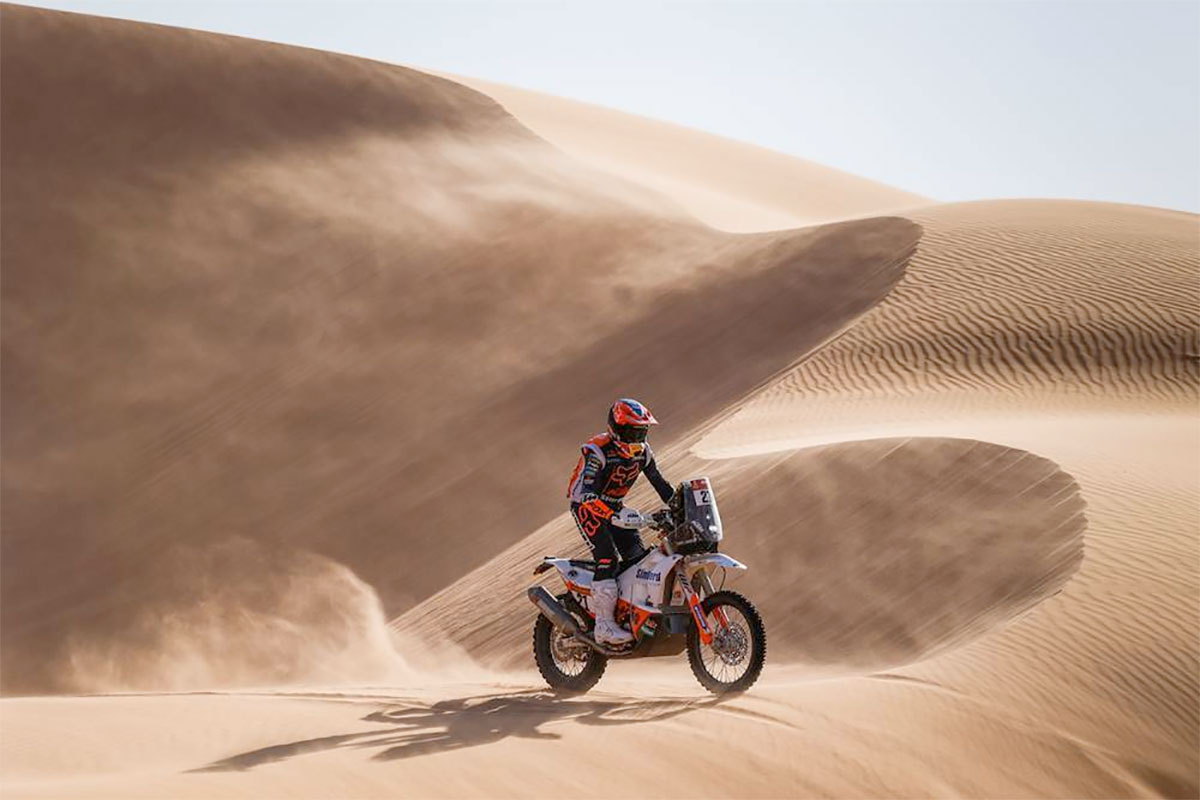 Daniel Sanders continues to hold his ground coming home on stage three in 8th. Photo: Rally Zone
Daniel Sanders continues to impress at his first Dakar. The young Australian has been able to make the best use of his out-and-out speed on the faster tracks of each stage, while taking care with his navigation and steadily improving his road book skills. As such, with another top-10 stage result with 8th, Sanders now lies an impressive 16th in the provisional rankings and as the event‰Ûªs top rookie, by close to 20 minutes.

‰ÛÏNot a bad day for me today, I had a few crashes on the dunes early on and then racing through the tracks and canyons I made a couple of small mistakes with the road book. At the end it was nice and fast, which suits me, and I was able to catch some of the guys in front. I think I put in a good time today with no dramas, and the bike was perfect all day again, too. It‰Ûªs only day three, so there‰Ûªs plenty more to come," Sanders said.

After fighting a debilitating headache all stage and fighting through the discomfort Australian Michael Burgess finished 37th and is in 40th position overall. Andrew Houlihan is 69th overall after finishing stage three in 72nd place.

Joan Barreda and Ricky Brabec ‰ÛÒ first and second yesterday ‰ÛÒ had a rough day, opening the track with arduous navigation before reaching the dunes, which proved difficult with the strong winds blowing in from Wadi Ad-Dawasir. The pair tried to manage the distance from their pursuers, but it was a gruelling mission for the Monster Energy Honda Team duo who left behind easy-to-follow tracks. In the end, the Spaniard took thirtieth place with the American posting twenty-fifth. The result leaves the pair lying in fairly reasonable overall positions: Barreda is eighth and Brabec thirteenth, 11‰Ûª15‰Û 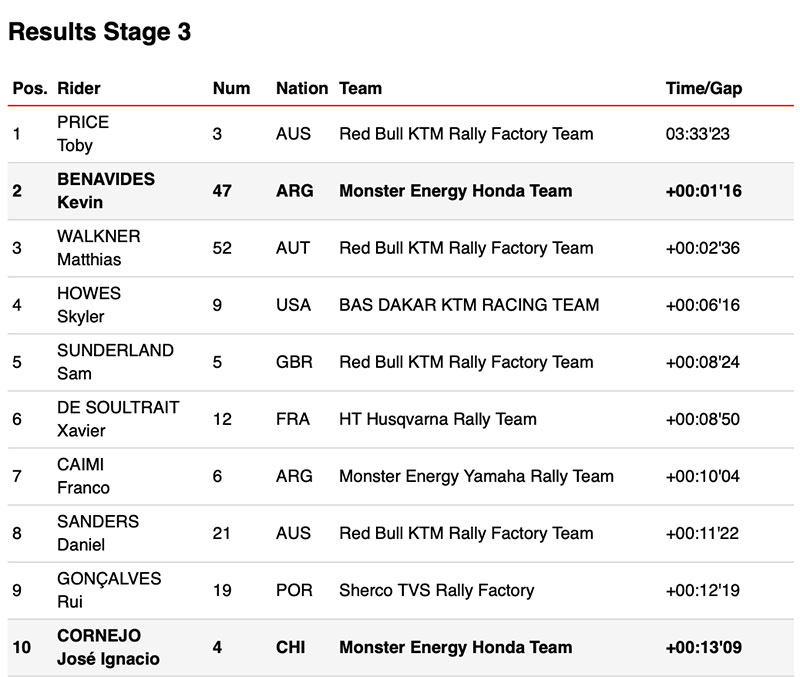 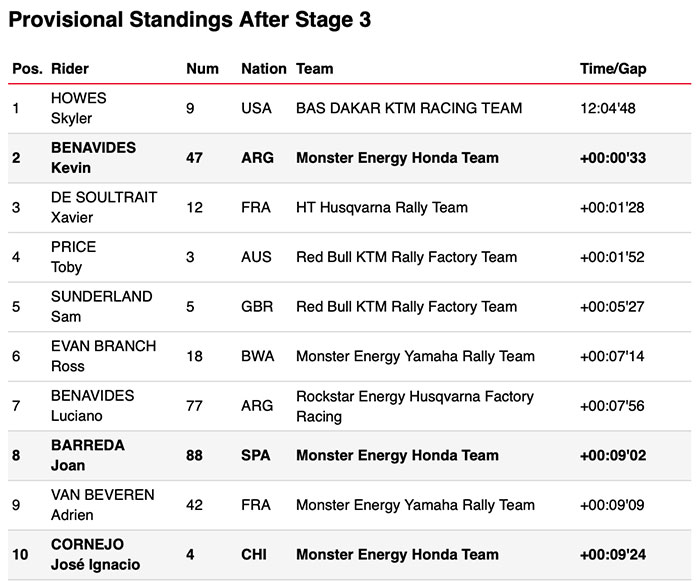