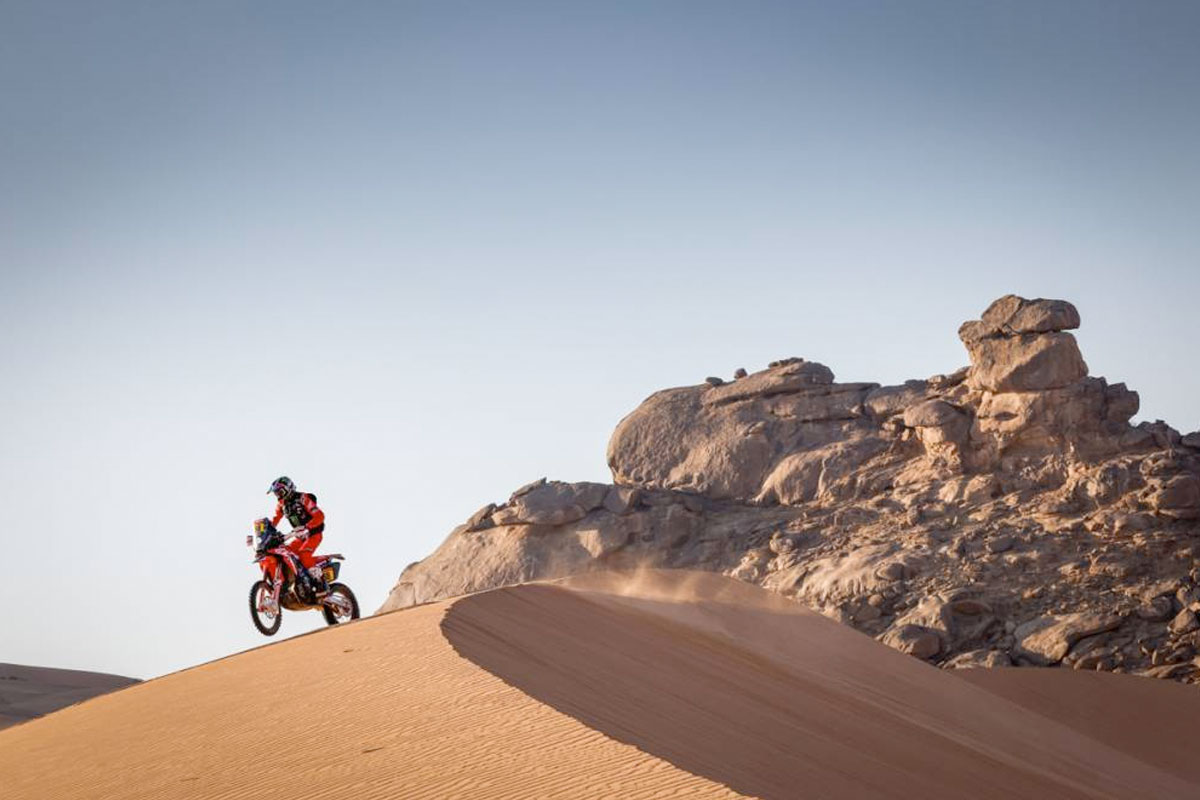 This marks a twenty-fifth stage victory for the Spaniard, who holds the place as the rider with the fourth highest number of wins in Dakar history. Barreda is the new overall leader of the 2021 Dakar.

Having opened the stage Australian Toby Price both put in a solid ride from the front to finish 22nd while compatriot Daniel Sanders enjoyed a strong day to finish 9th, spending much of the day holding a top-two position. Price is now placed 16th overall with a 17:39 second deficit while Sanders is in 18th, 21:11 seconds off the leader.


The Dakar, once again, produced a day of many reshuffles in the order compared to yesterday‰Ûªs stage. The riders who finished behind in yesterday‰Ûªs stage were expected to pounce in an effort to claw back time, which is precisely what they did, on track conditions which proved very conducive to gaining lost time.

Riders made a start from Bisha in cool temperatures before heading out onto the 135-kilometre liaison section which led to the starting point of the special stage. At the start of the 457-kilometre special, competitors faced low dunes and fast, open track, with the advantage always favouring the pursuers, proving to be a great handicap for the front-runners eager to fend them off. Later on, the stage hit level two and three type dunes, before ending on narrow stony areas and dried-out river beds. Finally ‰ÛÒ some 96 kilometres of link stage later ‰ÛÒ the riders found themselves back at the Wadi Al-Dawasir bivouac, which will be home-base for the coming two days.

"It was a very good stage. We were forced to attack from the very first kilometre until the end and the truth is that it went well," Barreda said. "But this is only the second stage of the Dakar and we know that tomorrow it will be difficult starting from the front once again. You have to stay calm, try not to make any mistakes and take it stage by stage." 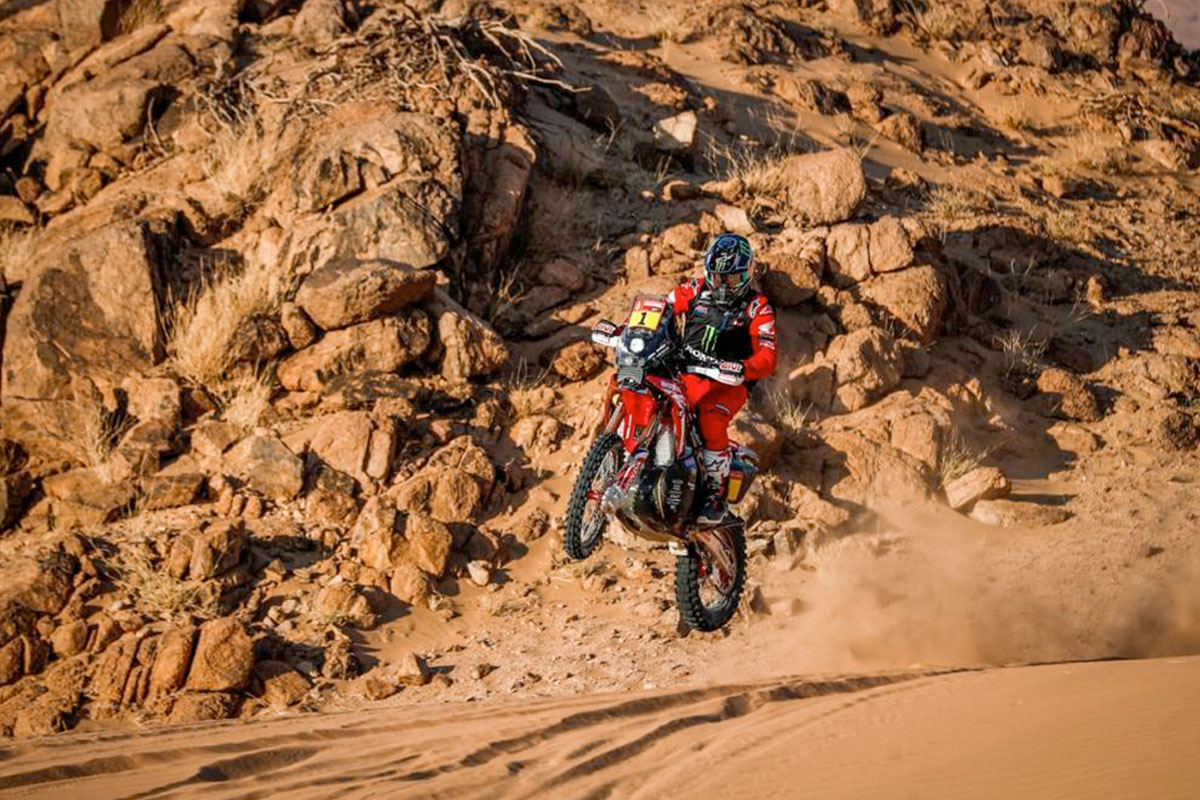 Defending champion Ricky Brabec made up ground with second on stage.
Brabec got off to a strong start today ‰ÛÒ as did Barreda ‰ÛÒ and was able to make up for the time dropped yesterday. Brabec accomplished his mission and now lies in second place overall, although he is well-aware that the Dakar has barely begun and a lot is in store before the great challenge finally draws to a conclusion.

"Unfortunately we didn‰Ûªt win, but I‰Ûªm not sure if I want to win a stage for the rest of this Dakar," Brabec said. "It bit us hard yesterday. It‰Ûªs going to be a long Dakar. We are going to do our best each day to finish each and every day. We‰Ûªre trying to make up time that we lost. We have ten days left. Right now we‰Ûªre in a good spot. We‰Ûªve got to be smart. We‰Ûªve got to keep the bike moving fast." 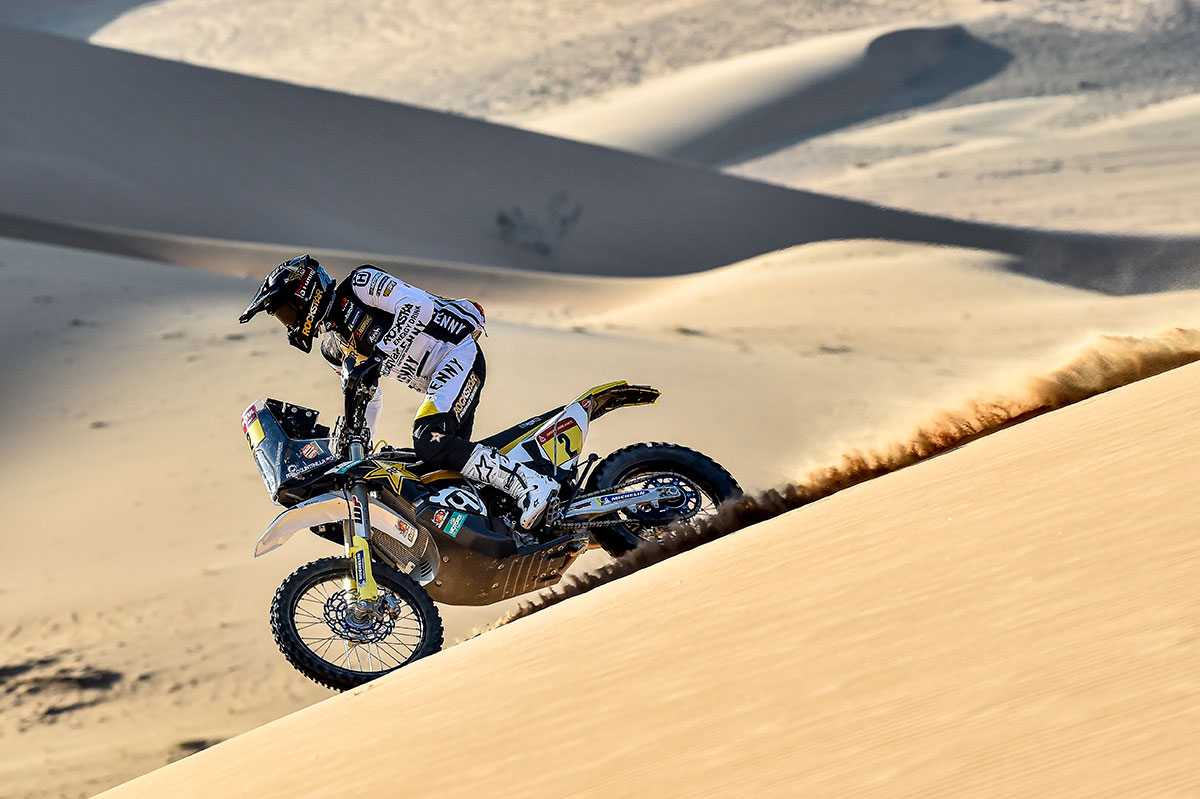 Pablo Quintanilla is currently lying fourth in the provisional overall standings after finishing third in stage.
Making the most of being the 22nd rider to start today‰Ûªs stage two, Pablo Quintanilla immediately settled into a strong pace. The Chilean rider, runner-up at the 2020 Dakar, moved up into the top five by the first checkpoint and didn‰Ûªt look back, maintaining a great rhythm over the various changes in terrain to ultimately complete the 457km timed special as third fastest.

‰ÛÏIt was a really good day for me today ‰ÛÒ it was a long stage, really fast with some tricky navigation in places," Quintanilla said. "Things started off tough right from the beginning with some very soft dunes, some of them were difficult to cross. Then some faster valleys between dunes, which I really liked ‰ÛÒ it suits my riding style and I much prefer it to the slower technical sections. It looks like there will be more dunes tomorrow, so we‰Ûªll see how things go.‰Û 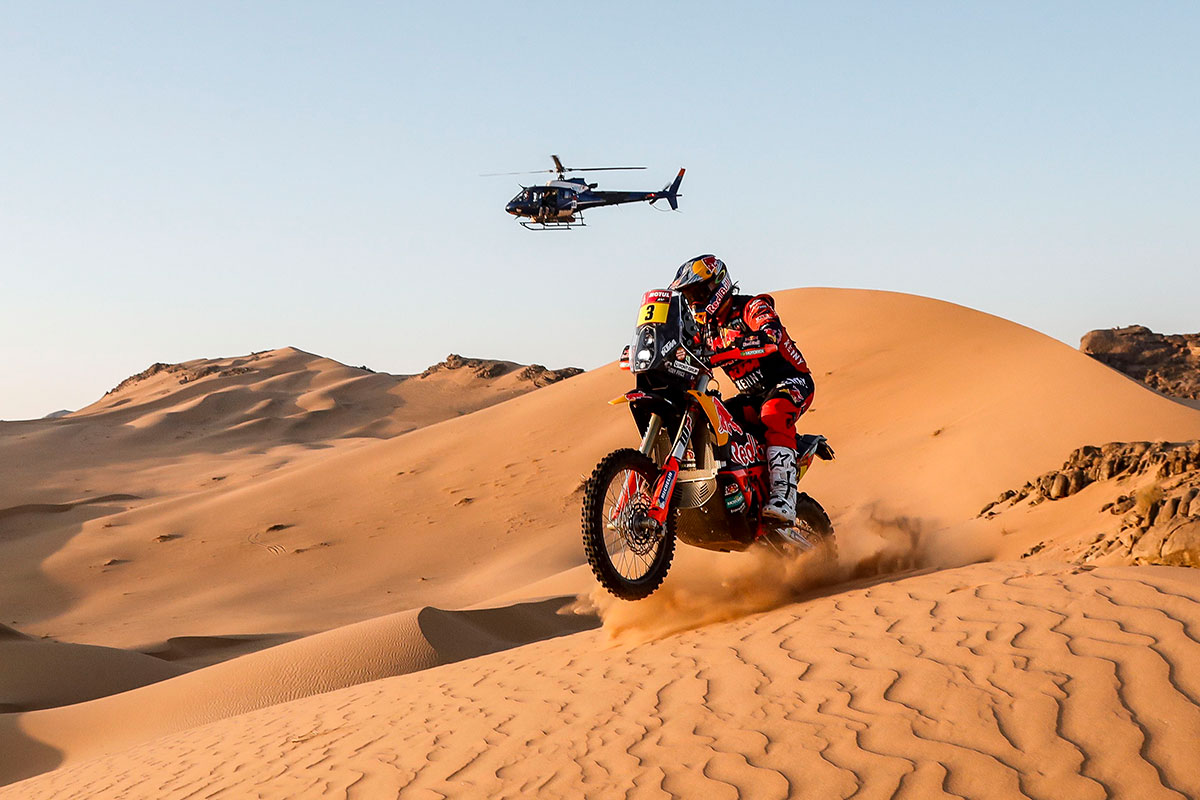 Having opened the stage Australian Toby Price both put in a solid ride from the front to finish 22nd.
Winner of stage one, Toby Price had the unenviable task of opening today‰Ûªs special. And with the route made up of a combination of tricky-to-ride dunes followed by navigation-intense tracks and valleys, the twice Dakar Champion had a huge challenge ahead of him. Putting in a mature ride, despite the difficulties he faced, Price was able to reach the end of the special safely and without any major issues. Although ultimately losing time on the new rally leaders, Price is confident in his riding and knows that the result could well swing back in his favor during tomorrow‰Ûªs stage three.

‰ÛÏOverall, I‰Ûªm happy with how my day has gone," Price said. "It was always going to be difficult to lead out, but I think that‰Ûªs going to be the case every day this year. The first 100 kilometers went well, then Kevin (Benavides) caught up and I rode about 150km behind him until he made a mistake, and I took over the lead again. In the later part of the special I had a small issue with the fueling on the bike, which meant I had to ease off a little, but thankfully didn‰Ûªt lose too much more time. We got caught today by the guys behind, but that was to be expected. Hopefully I can make some of that back again tomorrow in the dunes.‰Û 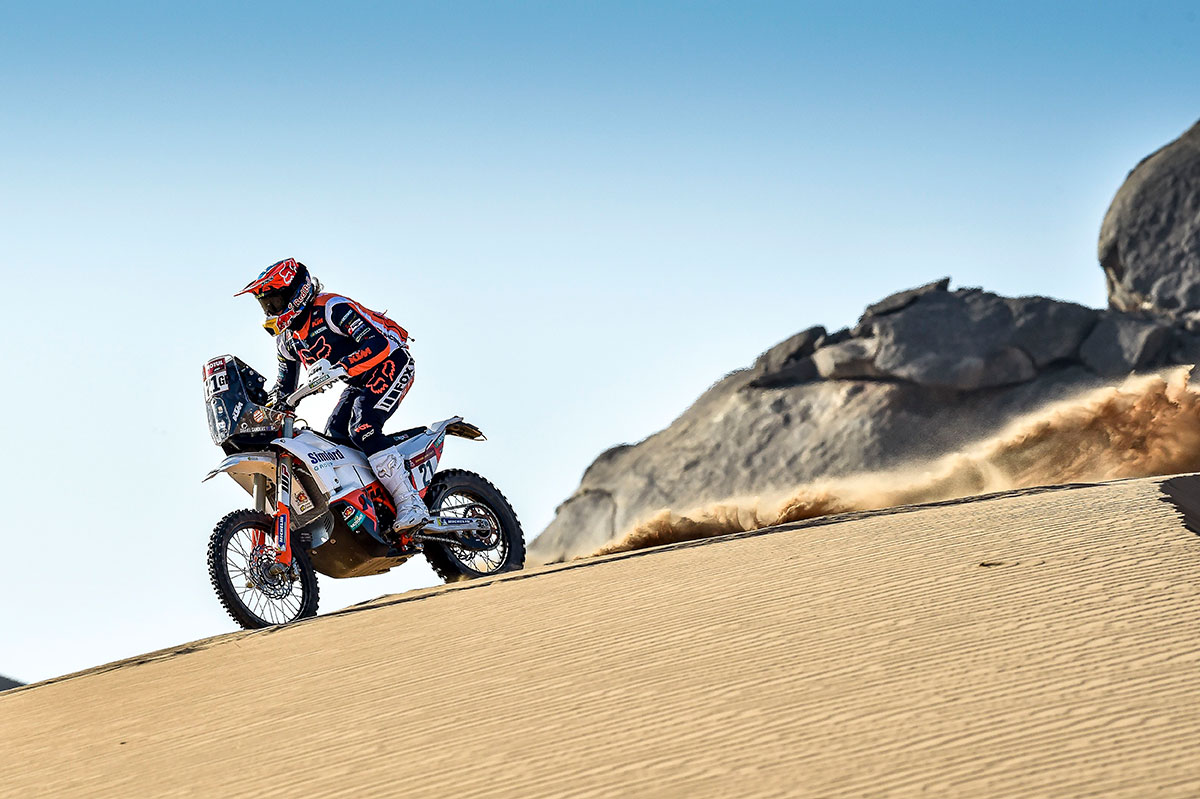 Daniel Sanders enjoyed a strong day to finish ninth, spending much of the day holding a top-two position.
Starting only his second ever Dakar stage, Daniel Sanders was able to push hard right from the start. Second fastest to the first checkpoint at kilometer 46, the former International Six Days Enduro champion made the very best use of his riding skills to storm through the first half of the stage, making it to the check point at 351km still inside the top two. A small mistake in the final part of the stage ended up costing the Aussie valuable minutes, but he was still able to bring it home in an extremely respectable ninth.

‰ÛÏToday started off really well for me, it was a fast stage and difficult to make up time on the guys ahead, but I was riding well and felt comfortable enough to push," Sanders explained. "Unfortunately, towards the end of the stage, I missed a note in the road book and ended up losing over 10 minutes. It‰Ûªs frustrating, but all part of the learning process. I‰Ûªve got a good start position for tomorrow, so I‰Ûªll give it my best again and try and close down on the leaders.‰Û 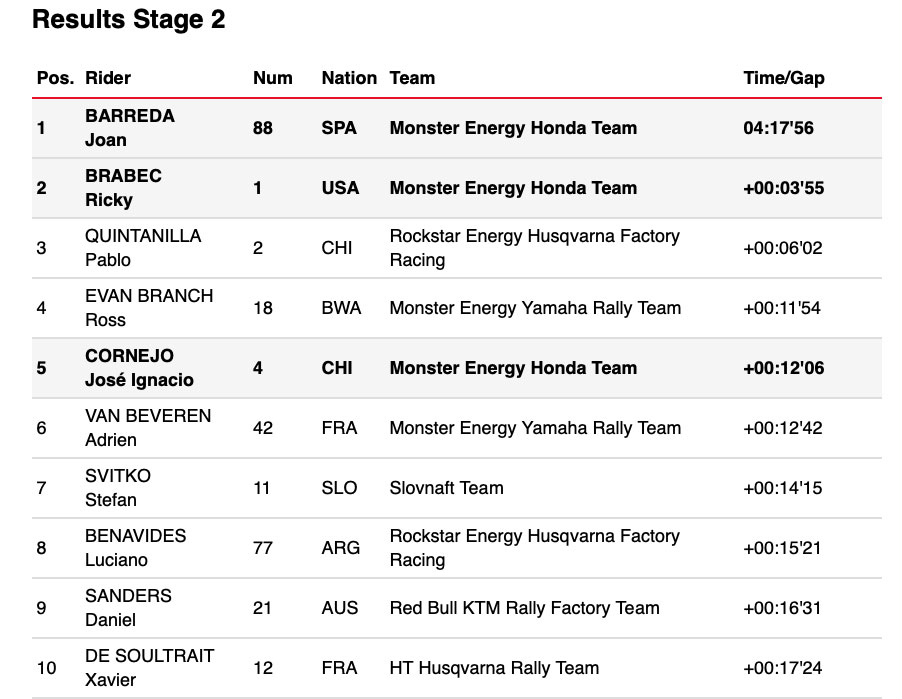 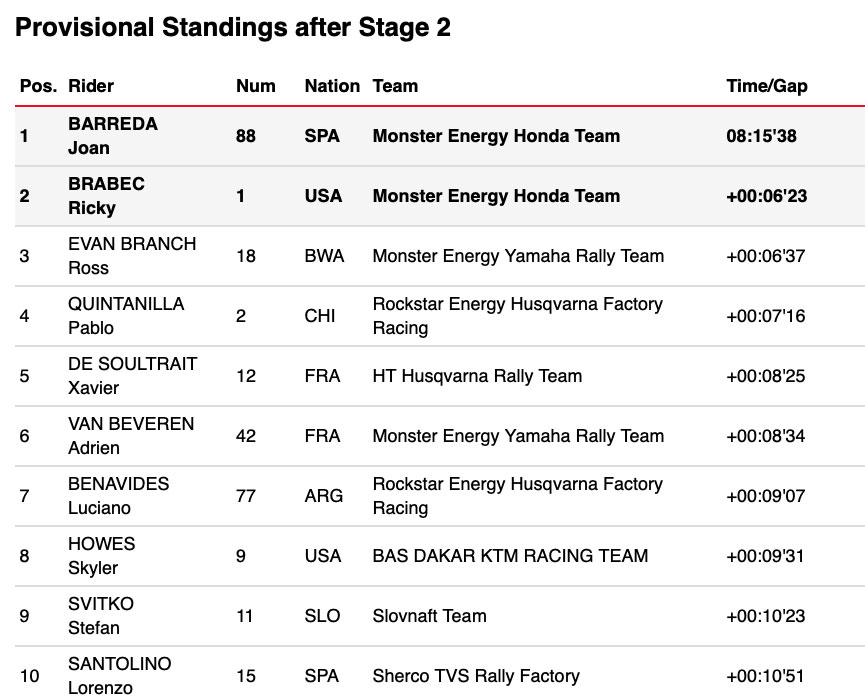