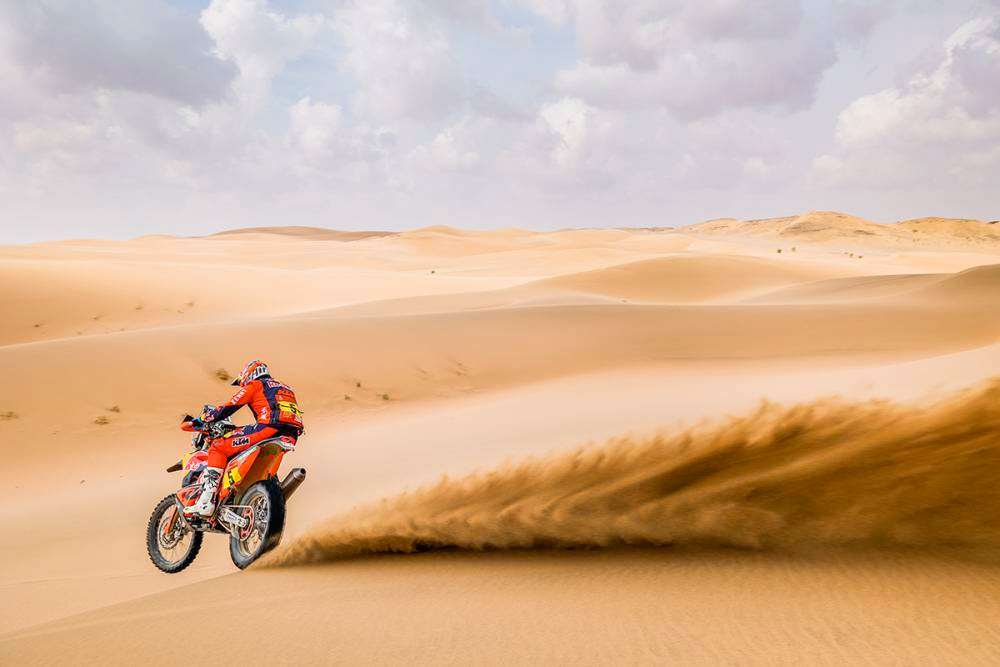 Putting in an impressive performance through the demanding 464km timed special, the Brit made up over six minutes on his rivals and now lies second overall behind Benavides in the provisional standings. Pablo Quintanilla was second on stage ahead of Benavides and Daniel Sanders who enjoyed another strong stage finishing in fourth, with Matthias Walkner less than one-minute behind in fifth. Defending champion Ricky Brabec mada a small mistake which saw him drop from second to third.

Despite being shortened from its original 511km to 464km, the timed special on stage 11 still proved to be hugely challenging for all competitors. Featuring close to 100km of dunes as well as fast tracks through tricky-to-navigate canyons, the penultimate stage of the Dakar tested the already-exhausted riders to their limits.


Third overall coming into today‰Ûªs stage and with an advantageous start position of eighth, Sam Sunderland set off 15 minutes behind the rally leader with every intention of chasing him down. Knowing the long special offered a great chance to improve his position in the overall classification, Sunderland made the best use of his speed and experience to close in on his rivals. Taking the lead of the stage by the fourth checkpoint at kilometer 215, the Brit remained in front on time from there to the finish. Although a small navigational error cost him some minutes in the final kilometers, Sam claimed the win on the stage and did enough to move himself up to second in the provisional overall standings.

‰ÛÏI gave my all today ‰ÛÒ I knew this stage would be one of the best chances I had to make up time on the guys in front," Sunderland said. "It‰Ûªs great to win the stage, but it means I have to open tomorrow for the last day, which will be hard. Still, anything can happen as we know, and I‰Ûªll keep fighting right to the end. It‰Ûªs been another really long, tough stage but I‰Ûªm grateful to be able to just race my bike through the desert, especially with everything that is going on in the world at the moment. I‰Ûªm grateful to my team too for all the hard work they have put in to get us here. The plan now is to do my best again tomorrow and we‰Ûªll see where we are.‰Û 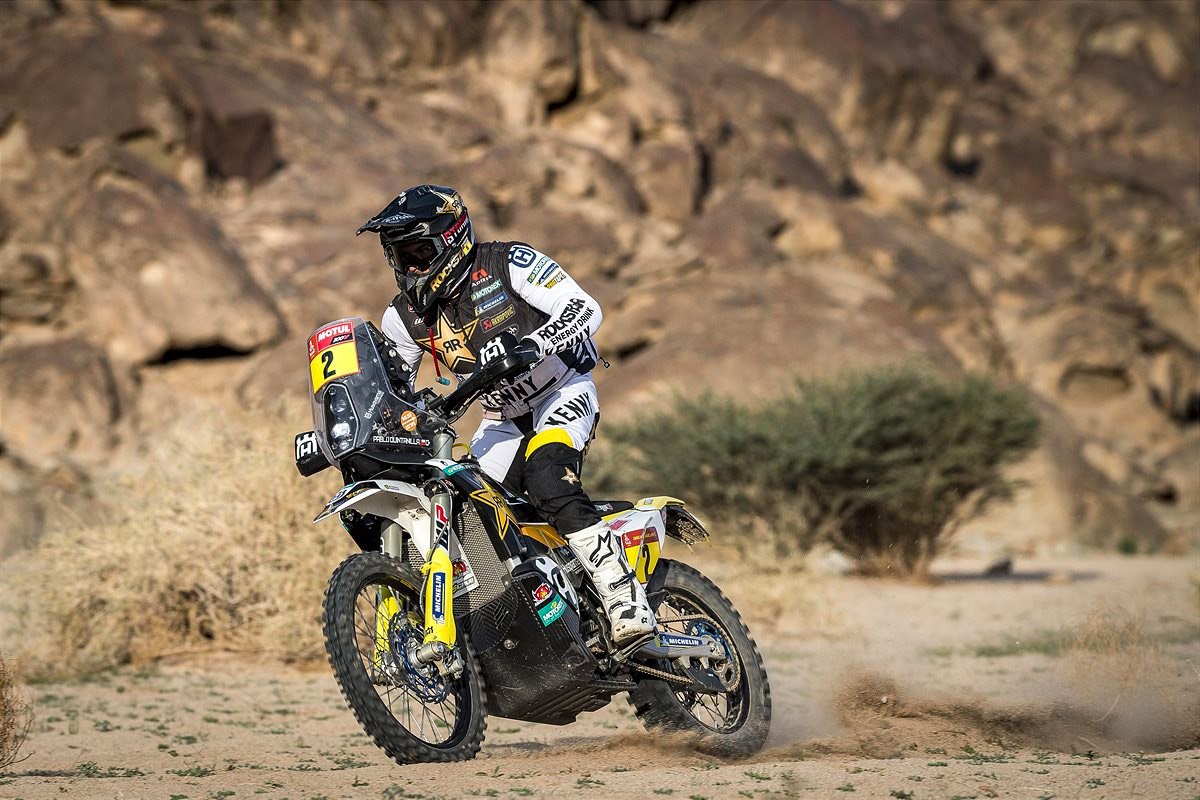 Pablo Quintanilla came into form where it mattered most with the experienced Chilean racer putting in an impressive performance, coming from a 15th place start to claim second at the finish.
Pablo Quintanilla delivered his best result to date with an excellent second-place finish. Never dropping below the top three for the entire special, Quintanilla ultimately came home as runner-up, less than three minutes down on Sunderland.

‰ÛÏIt has been a great stage for me today," Quintanilla refelcted. "We made some changes to the bike overnight and today things felt really good and I was comfortable enough to push. In the morning it was really dusty because I started quite far behind and it was difficult to pass some riders. But after the first neutralisation I started to find my rhythm, I was happy with the navigation and I was able to start making up some time. The stage was a tricky one with mixed terrain such as some rocky sections, some dunes, but it was quite tiring, especially when I was pushing all day. I ran out of water and started to feel a little dizzy towards the end and made a little mistake with my navigation. Overall, I really enjoyed the stage. It‰Ûªs nice to be able to ride at the pace I know I‰Ûªm capable of and we‰Ûªll keep pushing for a good result.‰Û 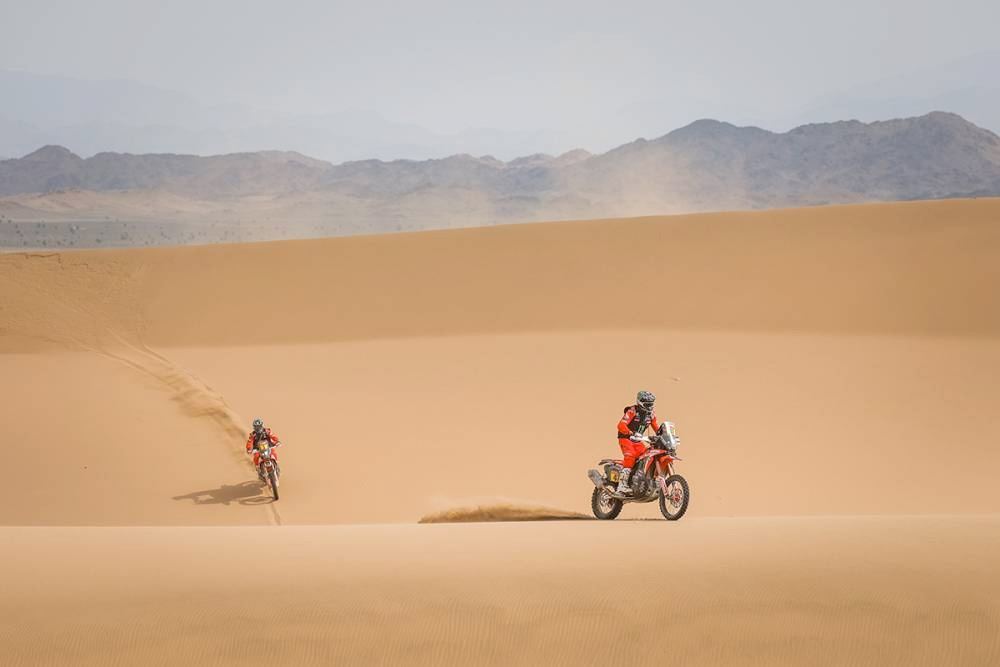 Kevin Benavides, third on stage leads team-mate Ricky Brabec through the desert after Brabec mad a small navigation mistake that cost him 5 minutes.
Kevin Benavides defended his overall lead in the race well to claim third place on the day. Tomorrow, he will attempt to hunt down his rivals in a bid for top honours on the final day of the Dakar Rally.

"Today was a long and difficult stage. It really had everything: it was very technical for navigation, we had dunes, rivers, rocks, but the truth was that it was a very beautiful stage," the Argentinean said. "I was determined to enjoy it and to try not to make mistakes with the navigation. It was a long day. I started third and I was able to catch my team-mates at kilometre 100, more or less. Then Joan made a mistake and ran out of fuel and, later, I passed Ricky and started to open the track for almost 200 kilometres. Later in the dunes I was able to ride together alongside Ricky and not lose too much time there. I think we have done some very good teamwork. I'm very happy with the day and now, more than ever, we have to be focused and give it everything tomorrow, the final day of racing." 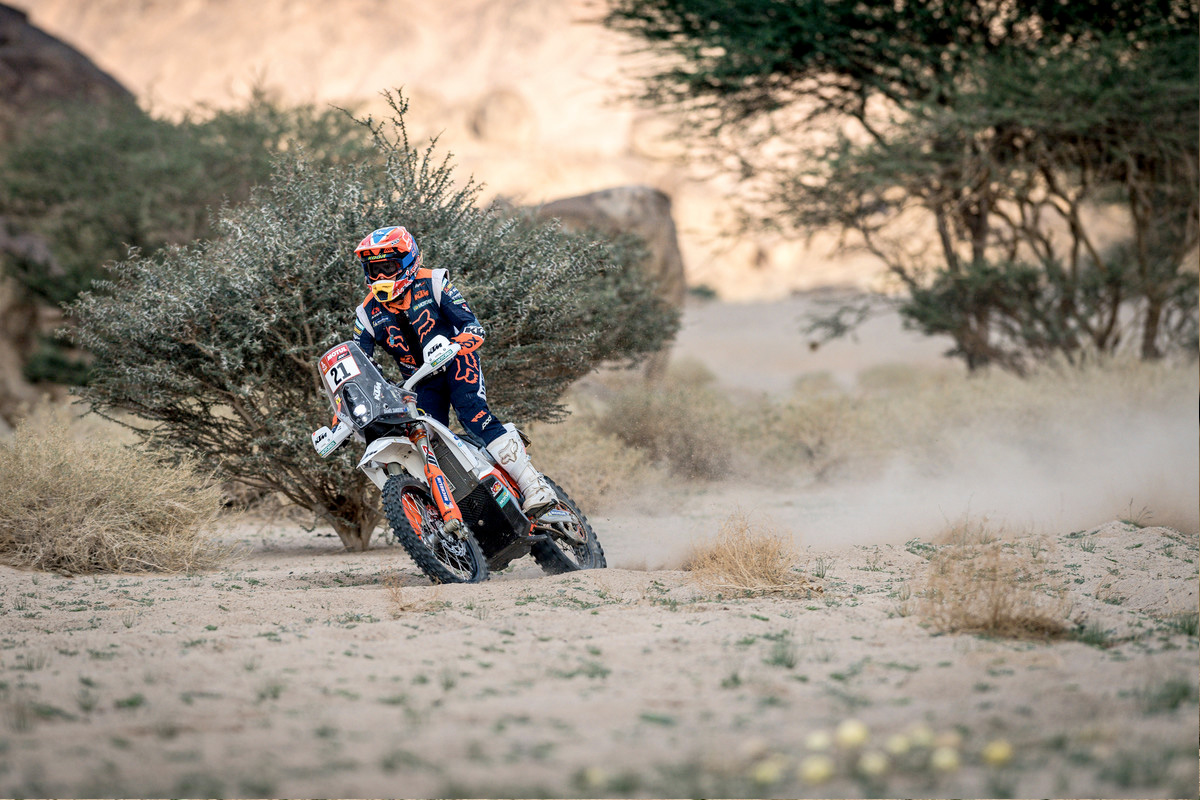 Daniel Sanders enjoyed another strong stage finishing in fourth and is now in the top five overall in his debut year. Photo: Rally Zone
Another strong day of racing in the dunes saw Australian Daniel Sanders complete a fourth stage at the 2021 Dakar inside the top five. Not only that, but the rally rookie finished just eight and a half minutes down on the flying Sunderland. As such, he moves up to a highly commendable fourth in the provisional overall standings. With one final stage remaining, the young Australian is looking forward to Friday‰Ûªs short stage 12 and hopefully the chance to successfully complete his first ever Dakar Rally.

‰ÛÏI started really well this morning with my navigation and managed to make up a lot of time by the first refueling stop at about kilometer 150," Sanders explained. "After that I was in the dust from the guys in front a little and just had to focus on my road book. Sam caught us, so I let him lead through the dunes and then coming into the last part of the stage there was some really tricky navigation. I think it‰Ûªs been my favorite stage of the event so far, we did some really cool stuff riding between the canyons and then into the dunes. It‰Ûªs been a difficult race, but I‰Ûªm feeling good, and all being well I‰Ûªm looking forward to finishing my first Dakar tomorrow.‰Û 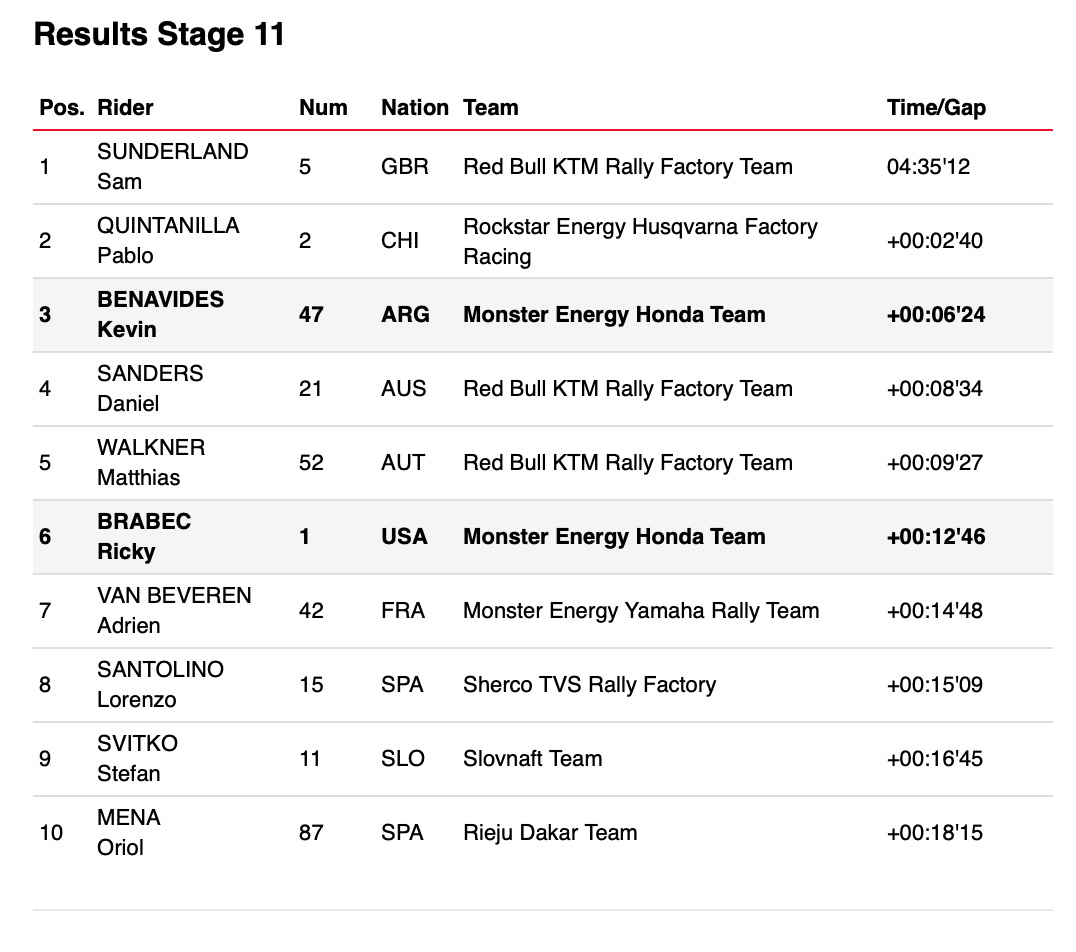 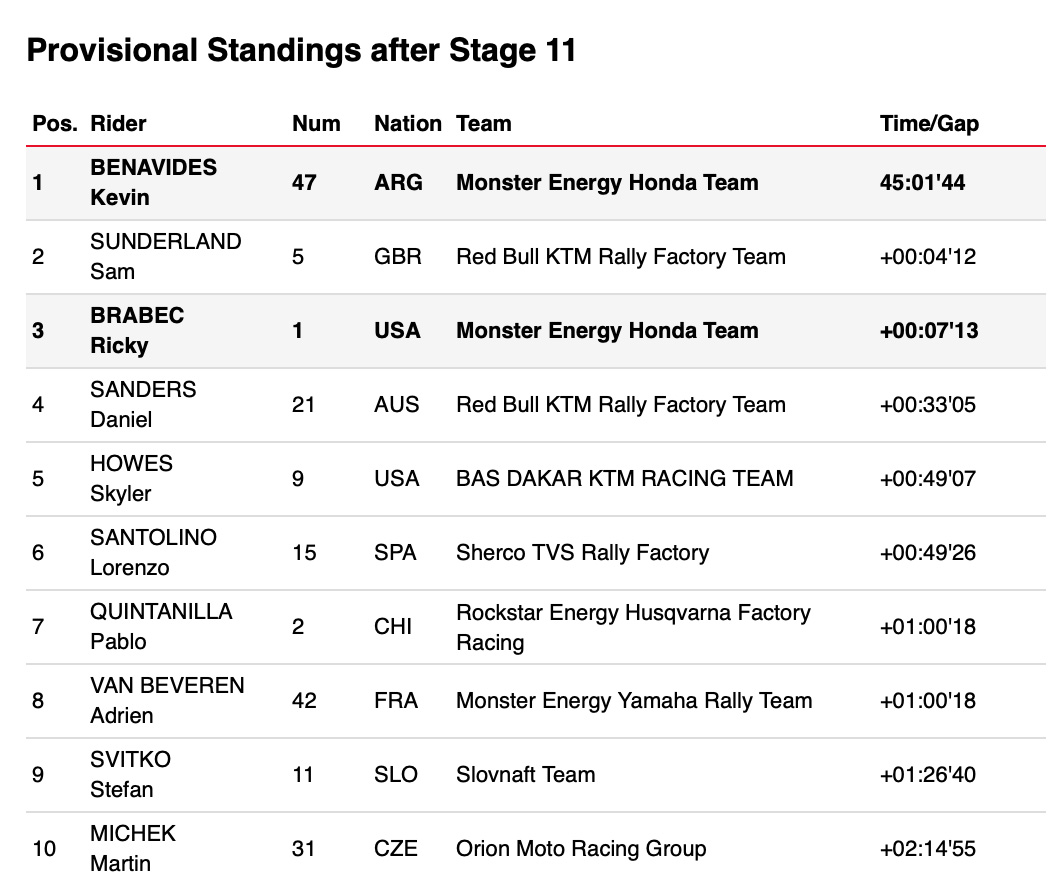