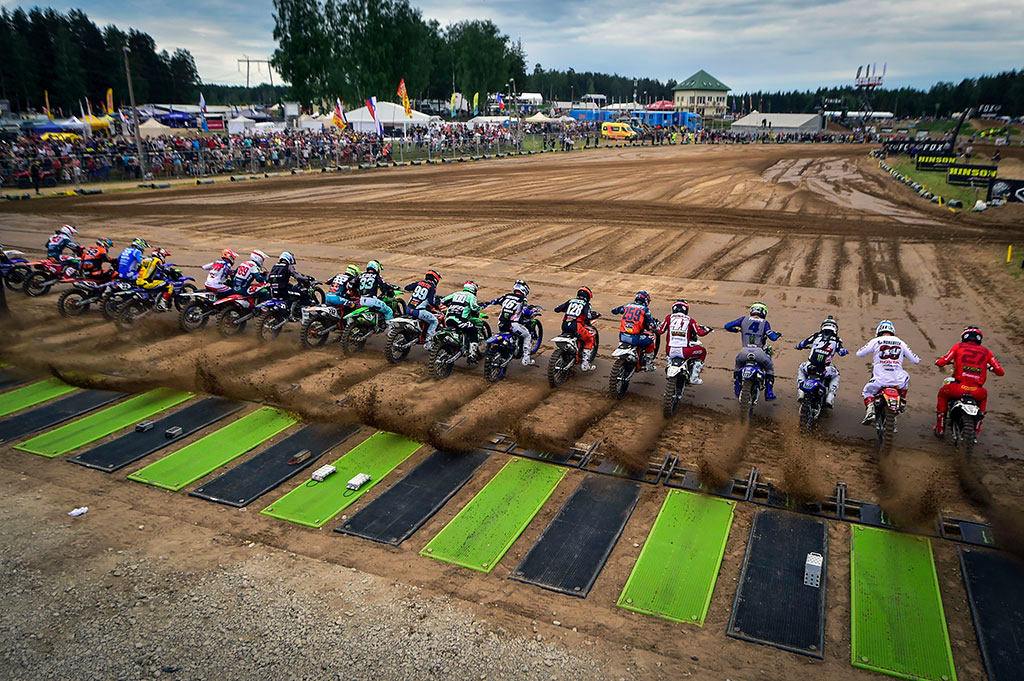 Infront Moto Racing has revealed the updated 2020 FIM Motocross World Championship calendar, as the series will make its return following a four month break due to the COVID-19 outbreak.

During the last four months, Infront Moto Racing alongside the FIM, National Federations and Organisers have been continuously in contact and weekly discussions with local governments have taken place, in order to determine the best way to re-start the FIM Motocross World Championships and the Motocross European Championships. The common goal has remained to preserve the maximum number of events in order to make a credible Championship, supporting all the stakeholders with the aim of saving the jobs of everyone in our sport.

Now even if the situation has not yet become completely clear with regards to COVID-19 our sport starts to see the light at the end of the tunnel, and with the calendar now announced MXGP will concentrate very intense Championships in 3 months managing to run all the classes with a very good number of events and ensuring an exciting racing.

The season will resume with a triple race in Kegums for the MXGP of Latvia, Riga and Kegums, with the first event scheduled on the 8-9 of August, followed by a mid-week special on the 11-12 of August, and the final Latvian stop concluding on the 15-16 of August. The Latvian circuit will undergo changes for each event, providing the riders with 3 completely different racetracks. As it stands, in Latvia there will be a total of 1,000 spectators permitted, with a promise that if the situation improves, we could see this number increasing.

The updated calendar will unfortunately see the cancellation of the MXGP of Czech Republic, the MXGP of Sweden and MXGP of Finland from the 2020 MXGP calendar with all being postponed to 2021. While this year we will have to miss the Finnish Grand Prix, Infront Moto Racing and Lahti Events Ltd. are pleased to confirm the continuing agreement that will foresee the MXGP in Finland next season in 2021 and present there until 2023, meaning a one year extension compared to its initial set term.

The MXGP of Germany, previously as TBA, as well as the MXGP of Indonesia and Asia scheduled to be held in November have been also postponed to 2021 while the MXGP of Emilia Romagna changed the venue hosting a double-race in Faenza ‰ÛÒ MXGP of Italy and MXGP of Emilia Romagna ‰ÛÒ and an additional race in Mantova for the MXGP of Lombardia have been included together with a triple race in Lommel, Belgium as the Monster Energy MXGP of Flanders, MXGP of Limburg and MXGP of Lommel. The 2020 MXGP Calendar then foresees the MXGP of Trentino scheduled at a later date and the MXGP of Patagonia-Argentina as penultimate and final event respectively. The MXGP of Russia and the MXGP of Portugal are part of the FIM Motocross World Championship calendar as TBC for the moment depending on the ongoing national conditions.

Unfortunately, the Monster Energy FIM Motocross of Nations in ErnÌ©e, France has been postponed to 2023 due to the high restrictions for COVID-19 which forbid mass public gatherings in France. Infront Moto Racing are now working with Steve Dixon to bring the 2020 Monster Energy FIM MXoN to Matterley Basin (UK); the event, which is nearly 3 months away will conform to the outdoor event guidance regulations.

From September onwards, at almost every event can have spectator number limits in place, but it is hoped that by then the situation will be much better, and there will have the possibility to welcome larger crowds. Every country has different protocols concerning the COVID-19 restrictions, therefore prior to each event we will inform all the stakeholders, media and fans concerning the specific restrictions they will need to follow.

With many events running consecutively one after the other, in order to provide the riders with a better recovery period, the MXGP and MX2 race action will be concentrated into one day, with free/timed practice taking place in the morning and the main races starting from 12h00 into the afternoon. Whereas the day before each event the European Championship and/or the Women‰Ûªs World Championship will be run.

At the Monster Energy FIM MXoN the participants will take points for the MXGP and MX2 World Championships, Infront Moto Racing and FIM are working on the regulations keeping in mind the format, the principle and the soul of the MXoN to be maintained.

Infront Moto racing concluded by saying, "It has been an extremely demanding task to put together this new calendar and Infront Moto racing would not have been able to do so without the support of the manufacturers, partners, riders, teams and fans and we would like to thank you all for your patience, understanding and support throughout this period. Now we look forward to making a return to racing and continuing the much-anticipated 2020 season." 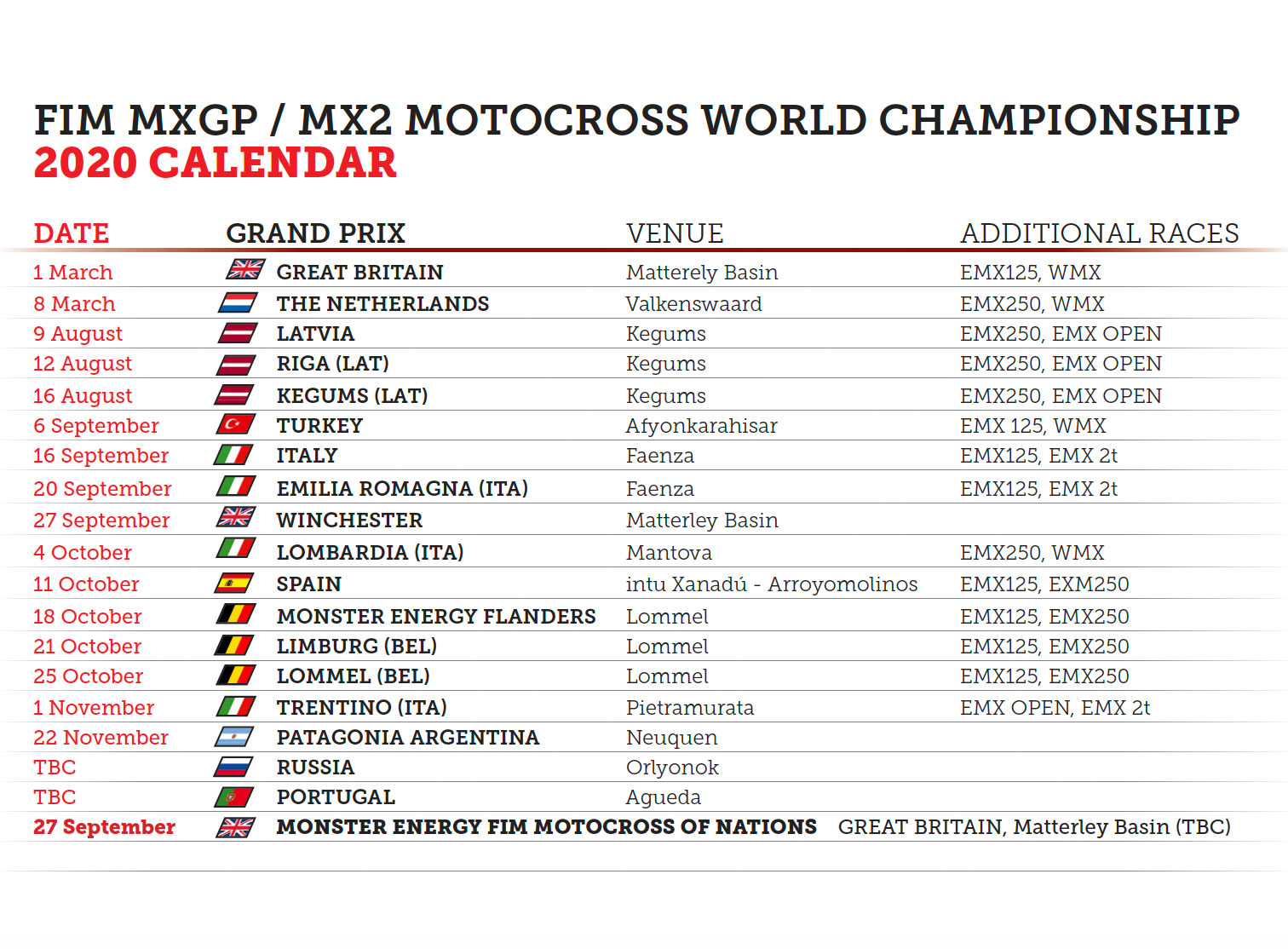