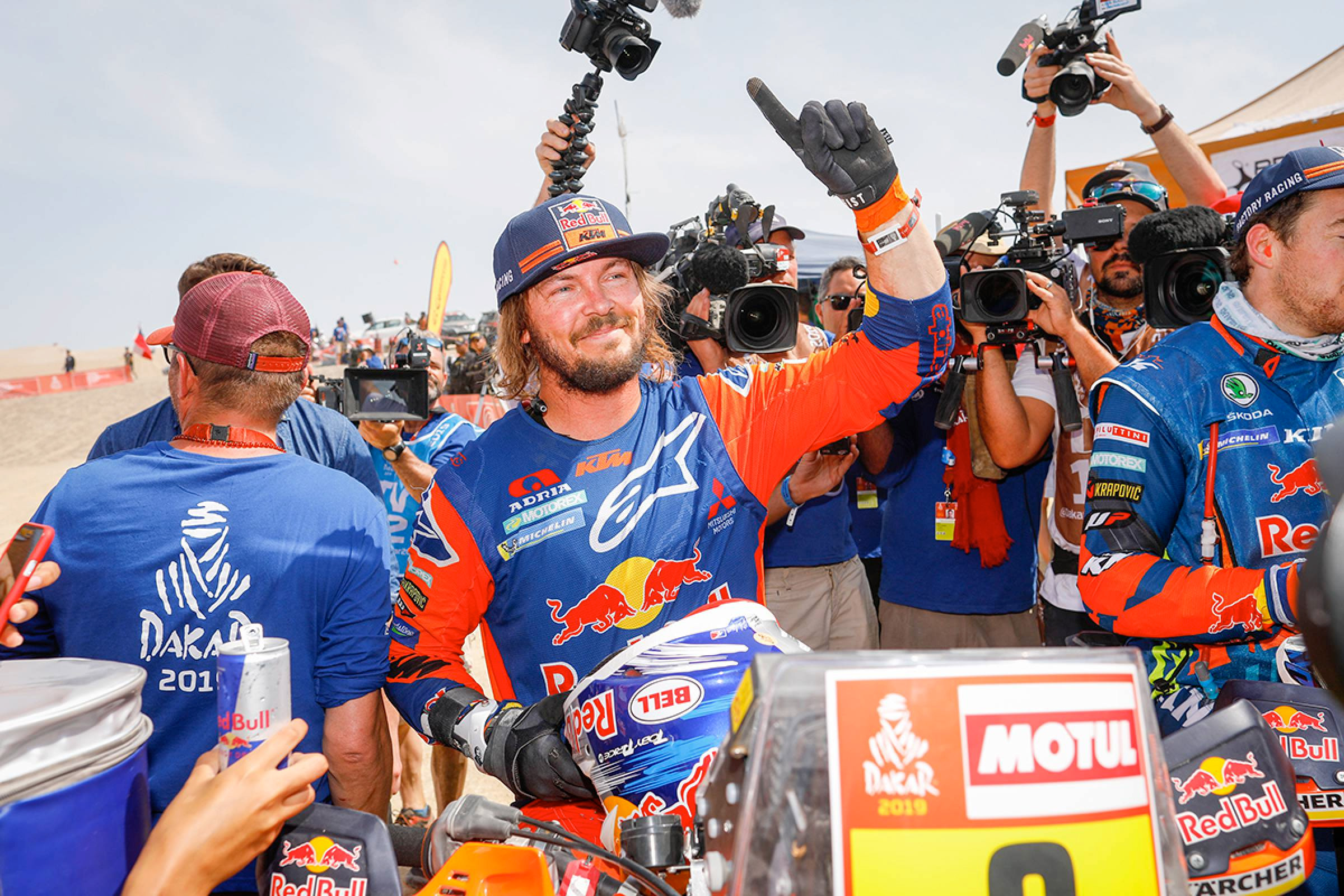 Red Bull KTM Factory Team's Toby Price claimed his second Dakar victory at the 2019 edition. Photo: Frederic Le Floc'h / DPPI
Toby Price has claimed the 2019 Dakar title with victory on the final stage in Liam, Peru, after battling through the ten day event, regarded as the toughest in the world, with an increasingly painful wrist injury.

Leading the overall standings ahead of Pablo Quintanilla. by just over one minute going into Thursday‰Ûªs 10th and final stage, Price had no choice but to give his all on the day‰Ûªs short 112-kilometre timed special. With competitors setting off in the reverse order to that of their position in the overall standings, Price was the very last motorcycle rider to enter the stage.

The Australian was on fire once proceedings got underway and took the title in the strongest form by taking the stage win while Quintanilla crashed spectacularly off a big dune. Price taking the stage win by 2 minutes ahead of Monster Energy Honda's Jose Ignacio Cornejo and KTM team-mate and 2017 winner Matthias Walkner, who was only 7 seconds short of Cornejo. In the overall result Price finished with a total winning margin of nine minutes over team-mate's Walkner and Sam Sunderland after the Brit was handed back an hour time penalty from the day before.

Price won the 2016 Dakar title and finished third in both 2015 and 2018, in 2017 he abaonded after breaking his leg. The win also secured KTM their 18th consecutive victory at the iconic event.


‰ÛÏIt‰Ûªs very crazy to sit here and say that we won the Dakar rally with no stage victories until today. It‰Ûªs really crazy. I‰Ûªm over the moon, I‰Ûªm so damned stoked," Price enthused.

"It‰Ûªs been a long 10 days. Now I‰Ûªll just wait and see what damage I've done to my wrist. At the end of the day, the pain and torture has been worth it. I thought I would only be able to do two stages and then pull out and that would have been me done, but the support from everyone back home in Australia and then having some things go my way and a bit of luck, it just worked out in the end.

The current World Rally Champion broke the scaphoid bone in his wrist just a month before the event which caused a lot of distress through the gruelling event. Overcoming the injury made the victory that bit sweeter Price explained.

"It‰Ûªs been an unreal rally. Pretty much all I can say is that it feels like there are about five people driving a knife in my wrist now," the 31-year-old explained. "It‰Ûªs not very comfortable, it‰Ûªs not very enjoyable, but at the end of the day the victory has paid off. I‰Ûªll forget about the pain now, that‰Ûªs for sure. The win takes away all the pain. For sure, if it wasn‰Ûªt for this victory it wouldn't have been as sweet, but at the end of the day I was just happy to make the finishing line.

"I didn‰Ûªt think I was even going to be able to do that. I‰Ûªm not the new boss of the rally, that‰Ûªs for sure. There are so many guys that can win this race and we had strong competitors like Pablo and Ricky Brabec, Sam Sunderland, Matthias Walkner‰Û_ everyone is strong. You can never count anybody out. Kevin Benavides did a great job and at the end of the day we all fight to the finish line and it‰Ûªs been a hard rally. I just don‰Ûªt like giving up, I don‰Ûªt like quitting, that‰Ûªs for sure. That‰Ûªs about it. I love being out on my bike and I love riding and to be here with all the Dakar family and the KTM team it‰Ûªs amazing. So, yeah, we‰Ûªre pumped," Price concluded. 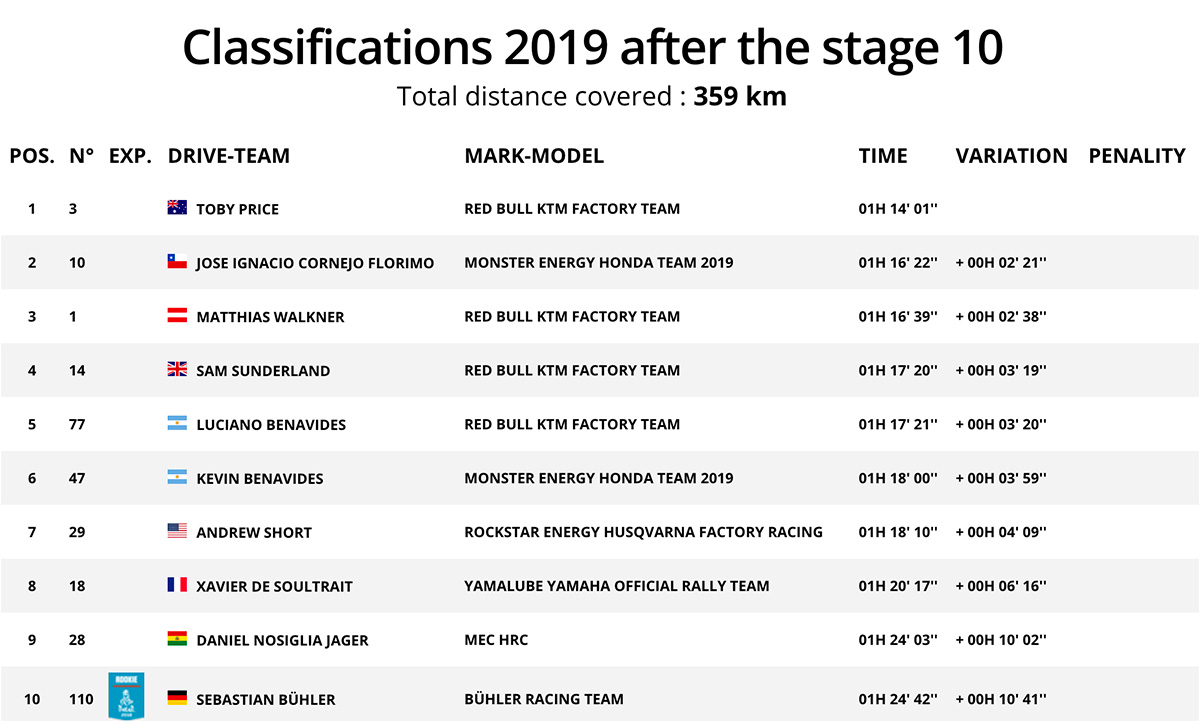 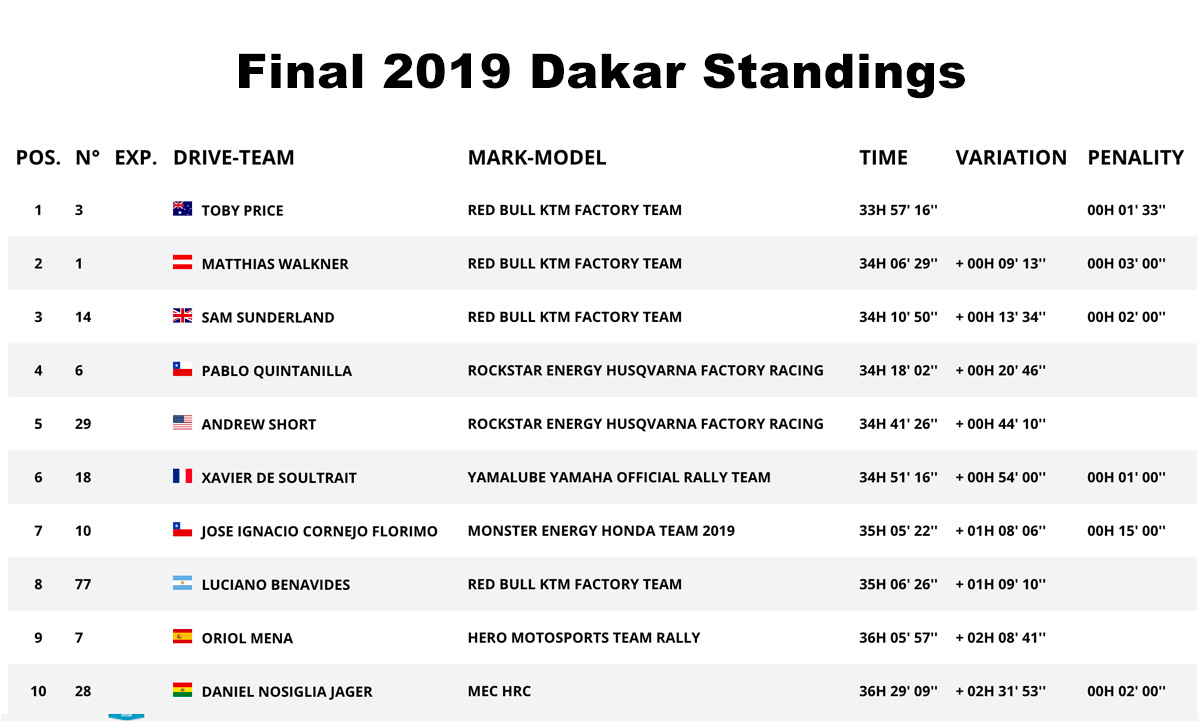