Daniel Milner takes a hat-trick at the Yamaha A4DE 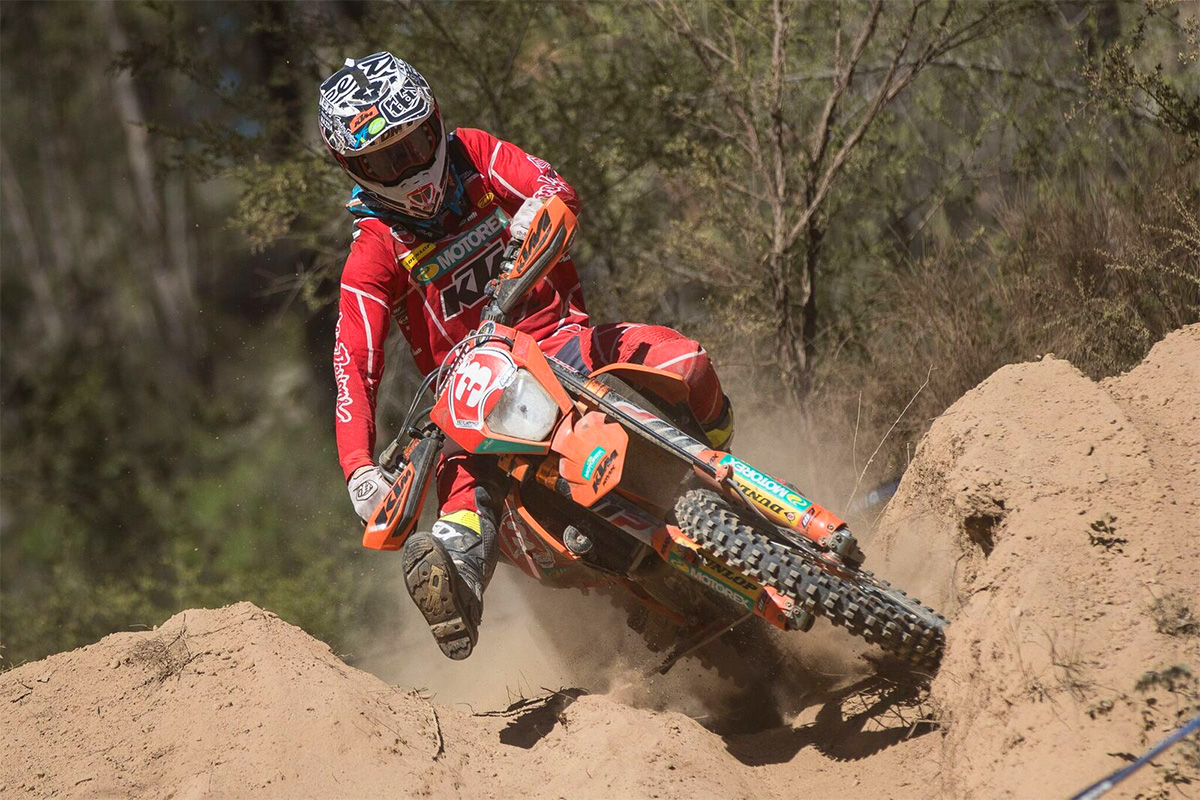 Daniel Milner took out all five of the tests on day three to cement himself at the top of the E3 class. Photo: John Pearson Media
Day Three of the Yamaha Australian Four Day Enduro (A4DE) has seen Daniel Milner aboard his KTM Enduro Racing Team bike complete a hat-trick, claiming three wins from three days in Cessnock, NSW.

The riders were thrown into rough and tough conditions in Cessnock on day three, which included a gruelling 165km trail rides as well as completing five tests. Knee high ruts and bull dust put the rider‰Ûªs skills on show throughout the Ballards Enduro Test, MXStore and the KTM/Husqvarna tests.

E3
Milner and his 500 EXC KTM can‰Ûªt put a foot wrong here at Cessnock, grabbing the days three result to back up his wins on days one and two. Milner put on just under two minutes to his nearest E3 competitor, finishing the day with a 33:18.345. Husqvarna‰Ûªs Lachlan Stanford again finished in second position, trailing Milner by 1:27.942s. The podium on day three was rounded out by Broc Grabham aboard his Gas Gas, trailing Stanford by 20 seconds after the 165km trail and five tests.

Milner battled through a tough day to claim the day three win; ‰ÛÏThe trail was tough, it basically turned into a special test as we had to make the test, but we were solid in the tests grabbing all five test wins. It was a bit of a struggle in the test as they were clapped out with knee high ruts, and I also had two crashes in the tests, but I managed to keep pushing forward and stay at the front. I‰Ûªm looking forward to the final moto tomorrow as I‰Ûªve never won a final moto, so I will be looking to grab the win and take out the A4DE title,‰Û 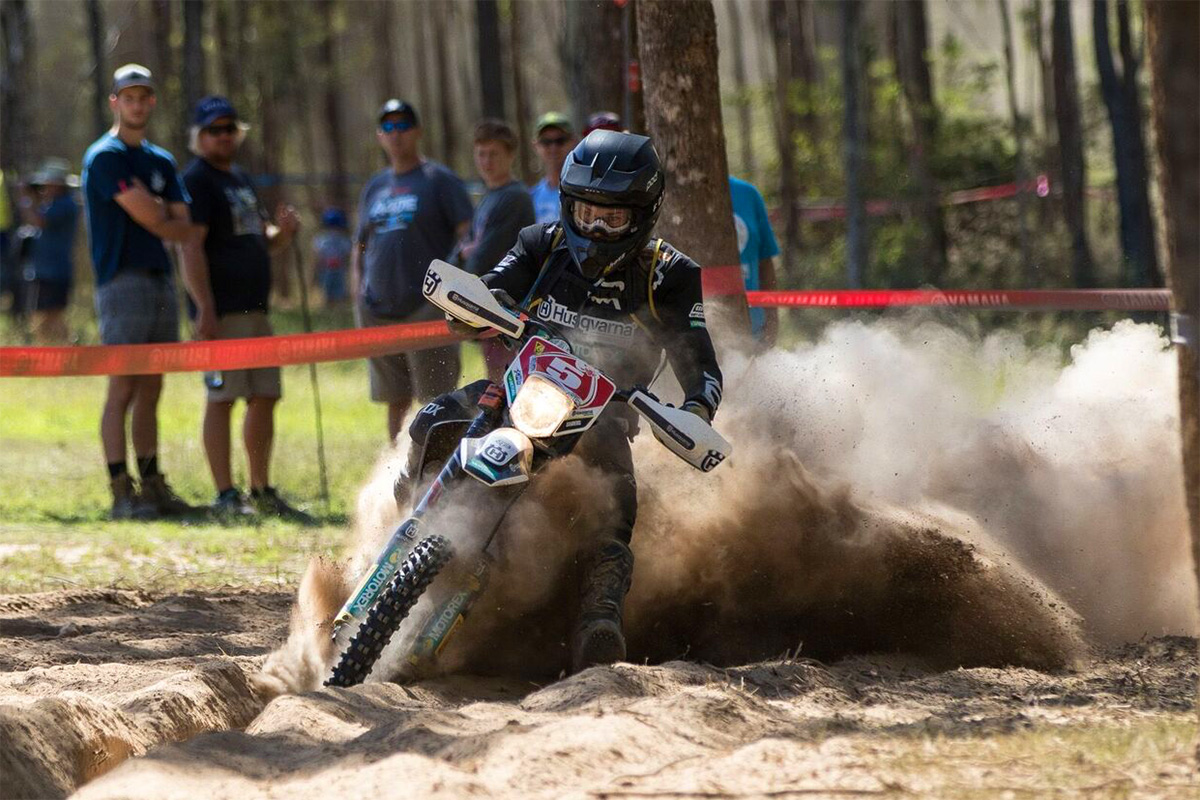 Sanders battled his way to a third win here at A4DE; ‰ÛÏIt was a very tough day at the office in the dust, it was great to finish what was a long and tiring day and grab the win again. I‰Ûªm looking forward to the final moto tomorrow, as I get to bring out my motocross skills and the boys will get loose and wild, but its going to be good fun on the 450, and the plan will be to get a good start and check out from the pack,‰Û 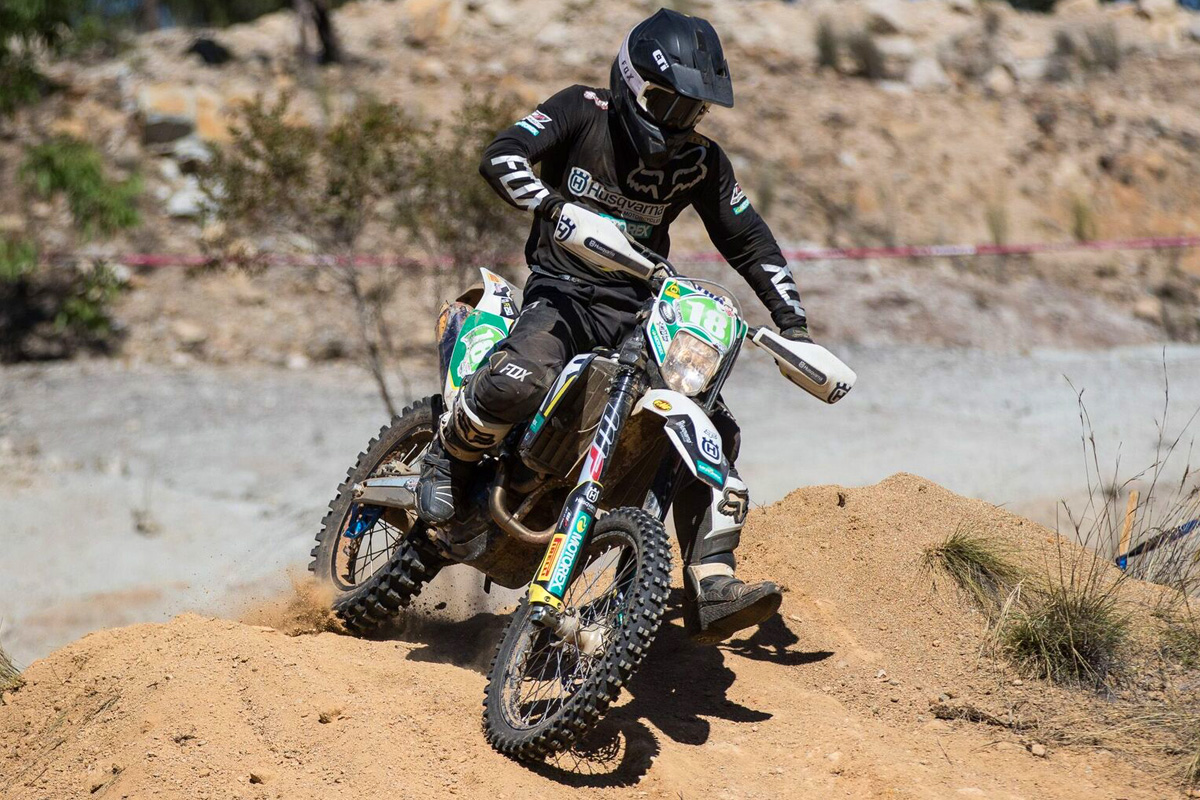 Fraser Higlett took out the E1 class on day 3 with a slender gap over Luke Styke. Photo: John Pearson Media
E1
Husqvarna‰Ûªs Fraser Higlett continued his impressive A4DE campaign, grabbing the honours on day three. Higlett is a fan on the dusty tracks and put that to good use during the five tests and 165km gruelling trails, stopping the clock at 34:31.299. Motocross convert turned enduro rider Luke Styke continues to impress on his Active8 Yamaha Yamalube collecting second position trailing Higlett by 13.649s. Michael Driscoll has looked at home here at A4DE in the E1 class, after making the jump from the EJ class he runs in the Yamaha Australian Off-Road Championship (AORC), placing in third position and trailing Styke by 22 seconds. 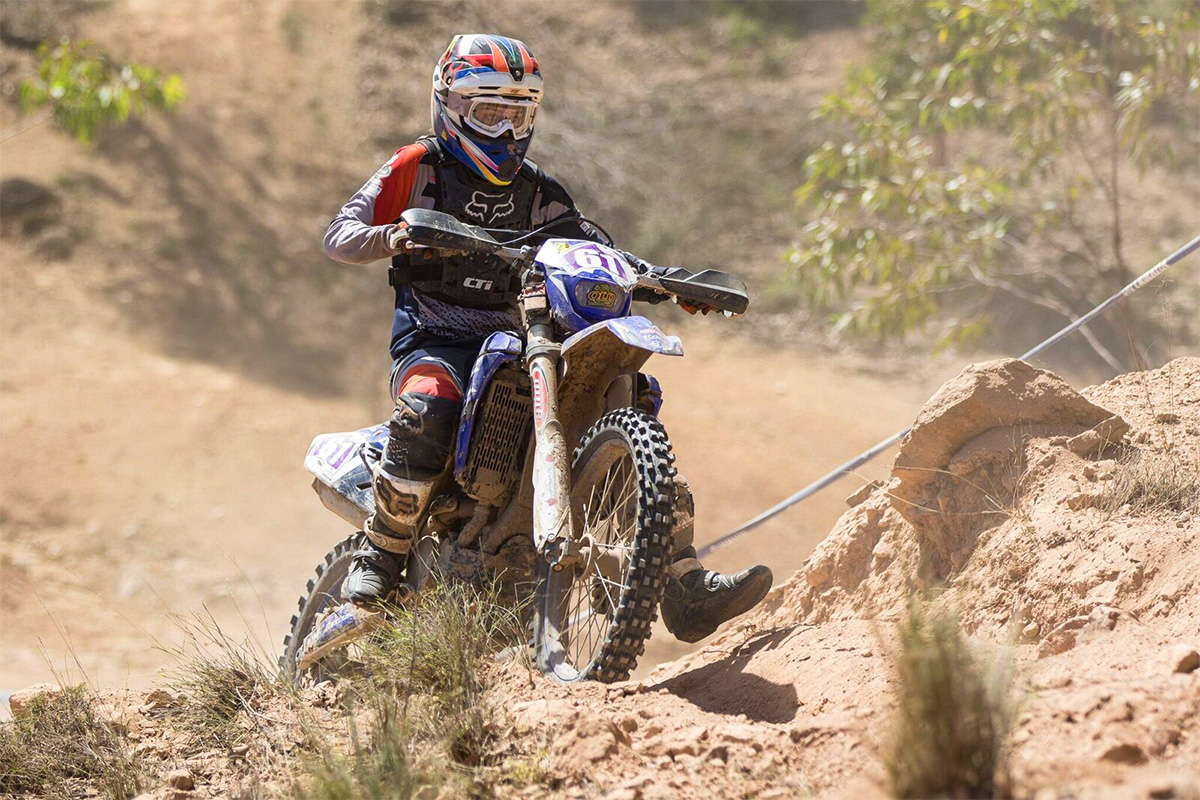 Jemma Wilson turned the tables on Jessica Gardiner on day three of the Women's class to take the win. Photo: John Pearson Media
Womens
Jemma Wilson has bounced back after a second-place finish on day two, to claim day three aboard her Yamaha and stop the clock at 40:31.298. In a day that tested the riders from start to finish, Wilson found an extra gear, and despite a few falls and losing a helmet peak, she found a way to win. Day two winner Jessica Gardiner had to settle for second on day three as she trailed Wilson by 19 seconds. Emelie Karlsson rounded out the podium after a solid days riding, stopping the clock at 41:56.904.

Wilson was happy to grab the win on day three; "Yeah look it was rough as out there today, both the test we did twice today were pretty insane. I had a good first few tests and then i did crash in the last two but to still get the win was pleasing," Wilson said. 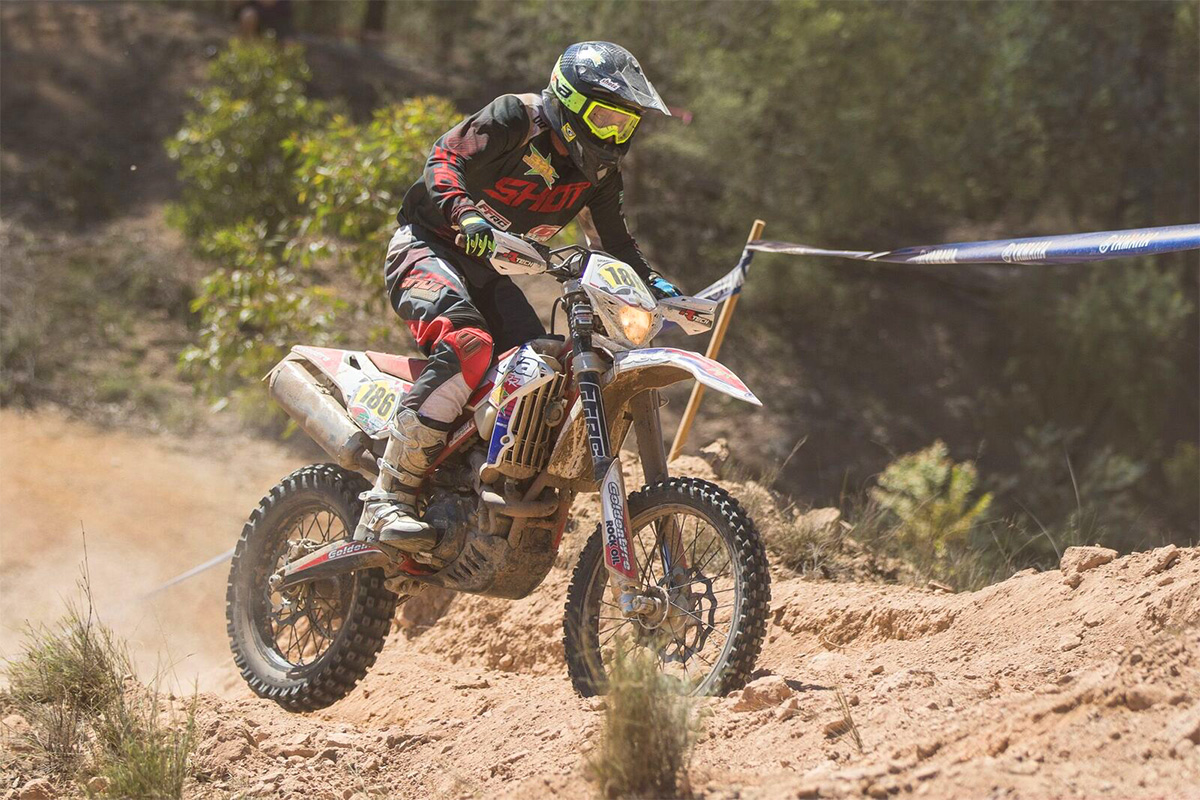 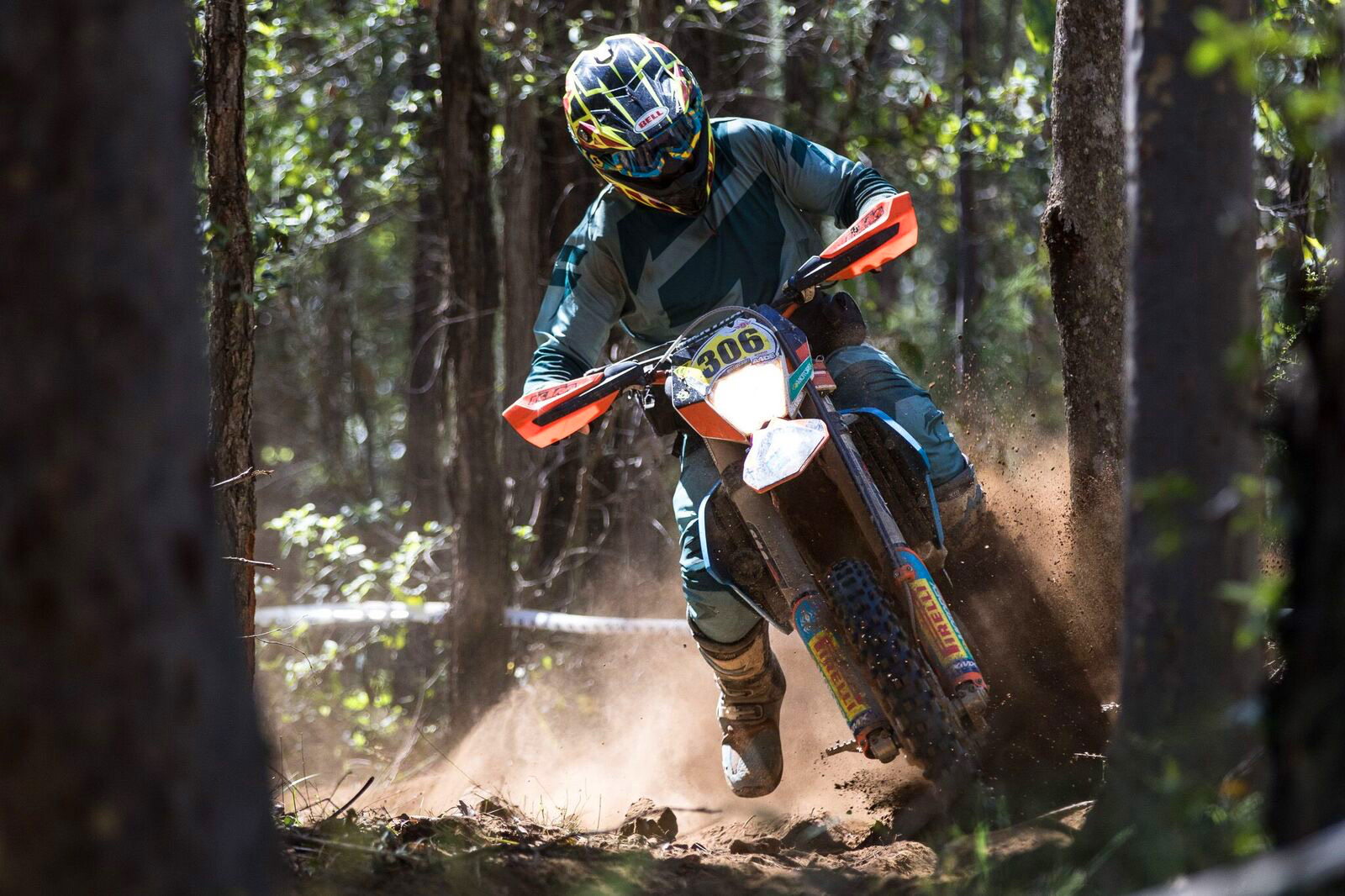 Brad Williscroft has dominated the Masters Class so far taking victory on all three days contested so far. Photo: John Pearson Media
Masters
The masters class has been controlled by one rider so far at the A4DE, and that rider is Brad Williscroft who has taken out all three days so far. On a day that saw the riders tackle tough and rough conditions, Williscroft continued to lead the pack and finished the day with a time of 38:42.197. James Deakin continued his good form in the masters class picking up another second-place finish, stopping the clock at 41:11.060. The podium was rounded out by Sean Clarke, who pushed through the tough Cessnock conditions to collect a time of 41:26.194.

The action wraps up tomorrow with the eagerly anticipated final moto at the Cessnock Racecourse. Riders will take on the 2.1km man built motocross track for five laps in each class.