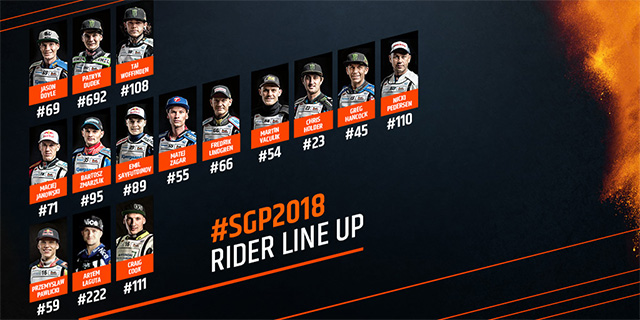 The Dane has always opted to race with his ranking number on his back, rather than choose a number. But this year sees him debut No.110 as he returns to action after recovering from the neck injury which halted his 2017 season.

GP Challenge winner Przemyslaw Pawlicki, who was born on September 5, brings No.59 into his SGP debut season.

Meanwhile, Artem Laguta returns to the World Championship after a seven-year absence with No.222 on his back, and Great Britain racer Craig Cook has chosen No.111 for his maiden SGP campaign.

The other returning SGP stars retain their numbers from 2017, with world champ Jason Doyle keeping No.69, despite having the option to don the No.1 race jacket after his famous title win in Melbourne last October.

Last year‰Ûªs World Championship runner-up Dudek would have claimed No.69 for himself, having used the number prior to his SGP entry last year. But with Doyle qualifying for the series two years before the Pole and selecting it first, Dudek sticks with No.692 as he bids to go one better this year.

Double world champion Tai Woffinden, born on August 10, remains No.108. Maciej Janowski went for No.71, while his fellow Polish star Bartosz Zmarzlik is No.95 ‰ÛÒ his year of birth. Russian racer Emil Sayfutdinov also goes for his birth year, No.89, while Matej Zagar keeps No.55.

Four-time world champion Greg Hancock sticks with the iconic No.45 he inherited from his hero Bruce Penhall, while 2012 world champion Chris Holder lines up as No.23. Swedish ace Fredrik Lindgren is No.66 and Martin Vaculik retains No.54.