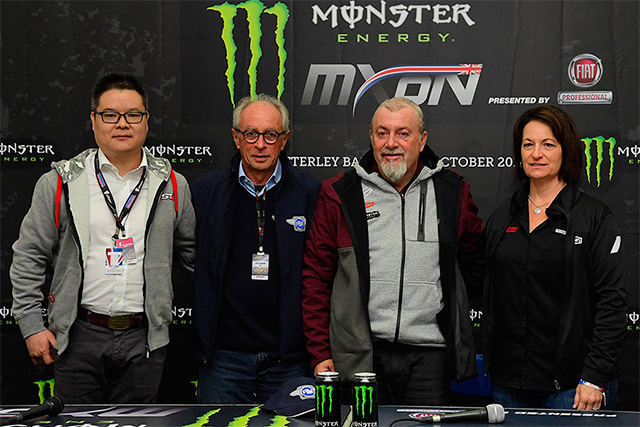 Perhaps the most exciting is the announcement that the 2018 Monster Energy FIM Motocross of Nations will be held at the popular Red Bud Circuit in the United States. The track is known as one of the best and most American tracks in the country as it annually hosts professional racing around the patriotic 4th of July holiday. Located in Buchanan, Michigan the Red Bud circuit will bring the Monster Energy FIM Motocross of Nations into the heart of America.

The 2018 FIM Motocross World Championship season will also see several new venues that emphasize the true worldwide MXGP championship which includes the MXGP of Spain at the new venue of Red Sand in CastellÌ_n and a new stop at the Afyon Motorsport Center in Turkey for both 2018 and 2019 with the full support of Turkish Motorcyling Federation (TMF).

Also a second round in Indonesia has been announced thanks to the increase of the interest of MXGP from the country, thus in 2018 MXGP will be back in Indonesia at the Pangkal Pinang site and in Semarang, on the North coast of Java Island 460 Kilometers from the country‰Ûªs capital, Jakarta.

Not only were the 2018 MXGP venues presented but a stop in China for 2019 is foreseen as well. The 2 MXGP events in Indonesia along with the addition of the MXGP of China in 2019 will pair perfectly with the growing interest of MXGP in Asia.

Also it was announced that the MXGP of Portugal in Agueda and the MXGP of Czech Republic in Loket have been renewed.

Youthstream President Giuseppe Luongo stated: ‰ÛÏMXGP continues to explode worldwide. The 2017 season was no less than exceptional from all points of view and there are increasingly more and more countries interested in our sport, which is evident through MXGP‰Ûªs social media where every day there are new countries showing enthusiasm towards MXGP.

"Youthstream is delighted to welcome Turkey and a 2nd MXGP in Indonesia to the MXGP circus in 2018, and it is great to be having Red Sand as the Spanish venue and to have renewed agreements with Loket and Portugal. The Motocross of Nations 2018 will be heading back to USA at the distinguished site of Red Bud. On top of that, 2019 will see China added to the list of MXGP destinations. MXGP organizers are committed to organize great and unique events and all together we are working hard to see Motocross flourish around the globe. We extend our sincere thanks to all MXGP organizers for the trust they give us.‰Û