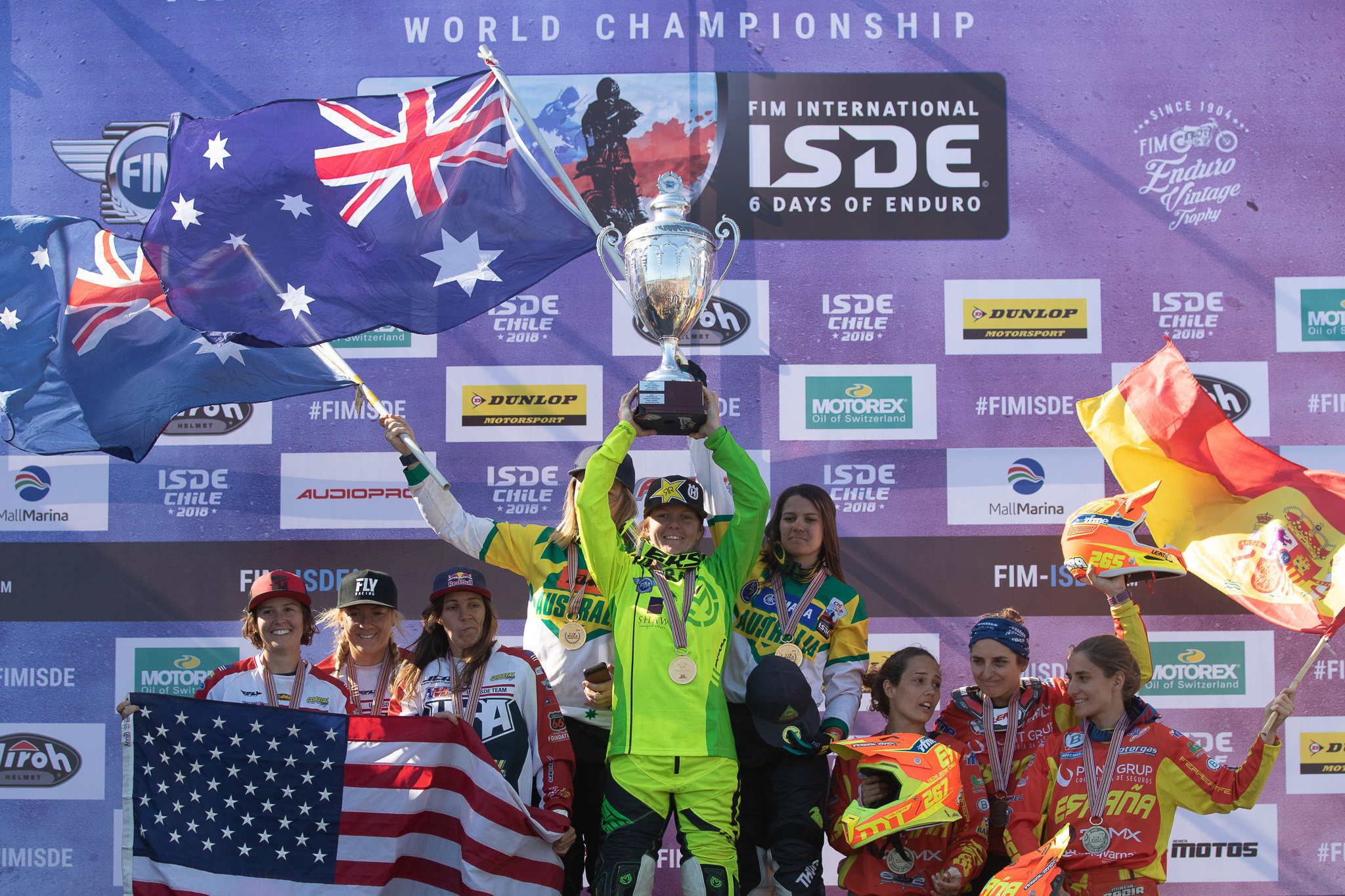 The 2018 Australian Women's ISDE Team of Tayla Jones, Jessica Gardiner and Mackenzie Tricker on top of the world. Photo: John Pearson Media
As the sun sets on the 93rd edition of the FIM International Six Days Enduro (ISDE), the Australian Women‰Ûªs World Trophy Team have gone above and beyond to be awarded their sixth consecutive world title!

Taking out a record breaking 2018 title, Australia lead the charge ahead of Team USA by just over nine minutes, followed by Spain, France and Sweden in third, fourth and fifth place respectively.


After five days of Enduro racing in blinding dust and stifling heat, day six presented our three ladies with a short and fast Motocross circuit, where the value of remain mistake free is utterly critical to your individual and the team‰Ûªs overall success. With the Pacific Ocean set as the backdrop to the action-packed final day of the 2018 ISDE, Vina del Mar put on a spectacular show for all attending fans, and Australia pulled out all stops to gain further ground on Team USA. 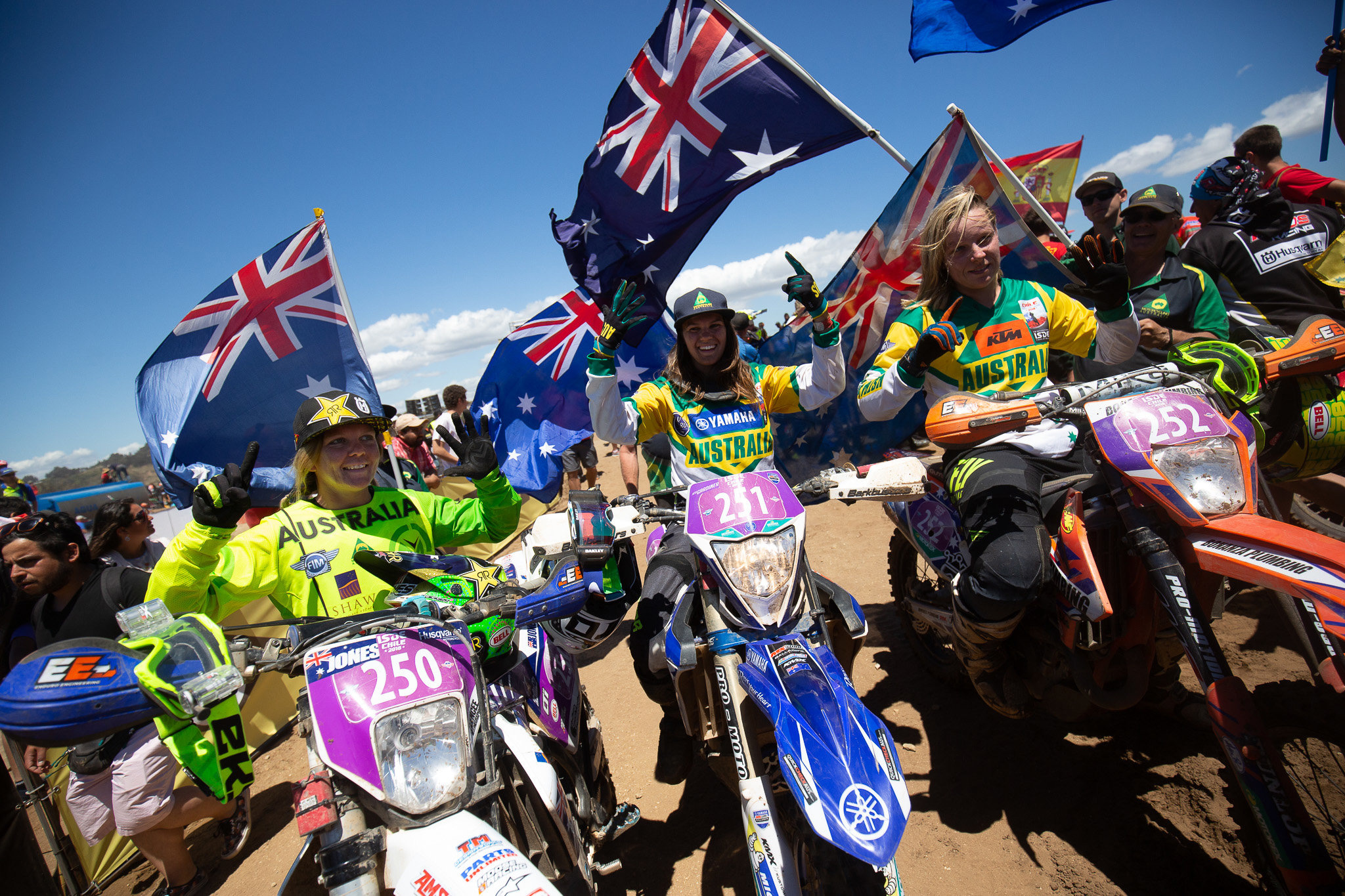 The 2018 Australian Women's ISDE Team of Tayla Jones (250), Jessica Gardiner (251) and Mackenzie Tricker (251) on top of the world. Photo: John Pearson Media
Scoring another consecutive win overall for the day, Tayla Jones clocked in the fastest time for Team Australia of 10:23.76, leaving not a shadow of a doubt as to her rightful place as first overall in the class. Sitting in second overall was Brandy Richards from Team USA, whose battles with Jones over the past six days simply couldn‰Ûªt knock Jones off her perch, with a divide of just under three minutes separating the two riders in the final results. Jessica Gardiner clocked in the second fastest time for the team in day six of 11:21.54, which has secured her place as fourth overall, sitting behind Livia Lancelot from Team France by just over six minutes. 2018 Australian Women‰Ûªs World Trophy Team debutante Mackenzie Tricker proved her place in the team of three, rounding out the team to score ninth position overall. At the close of an emotional and record breaking 2018, Team Australia has taken out the world title, first place overall, and placed all three ladies in the top ten of the class! 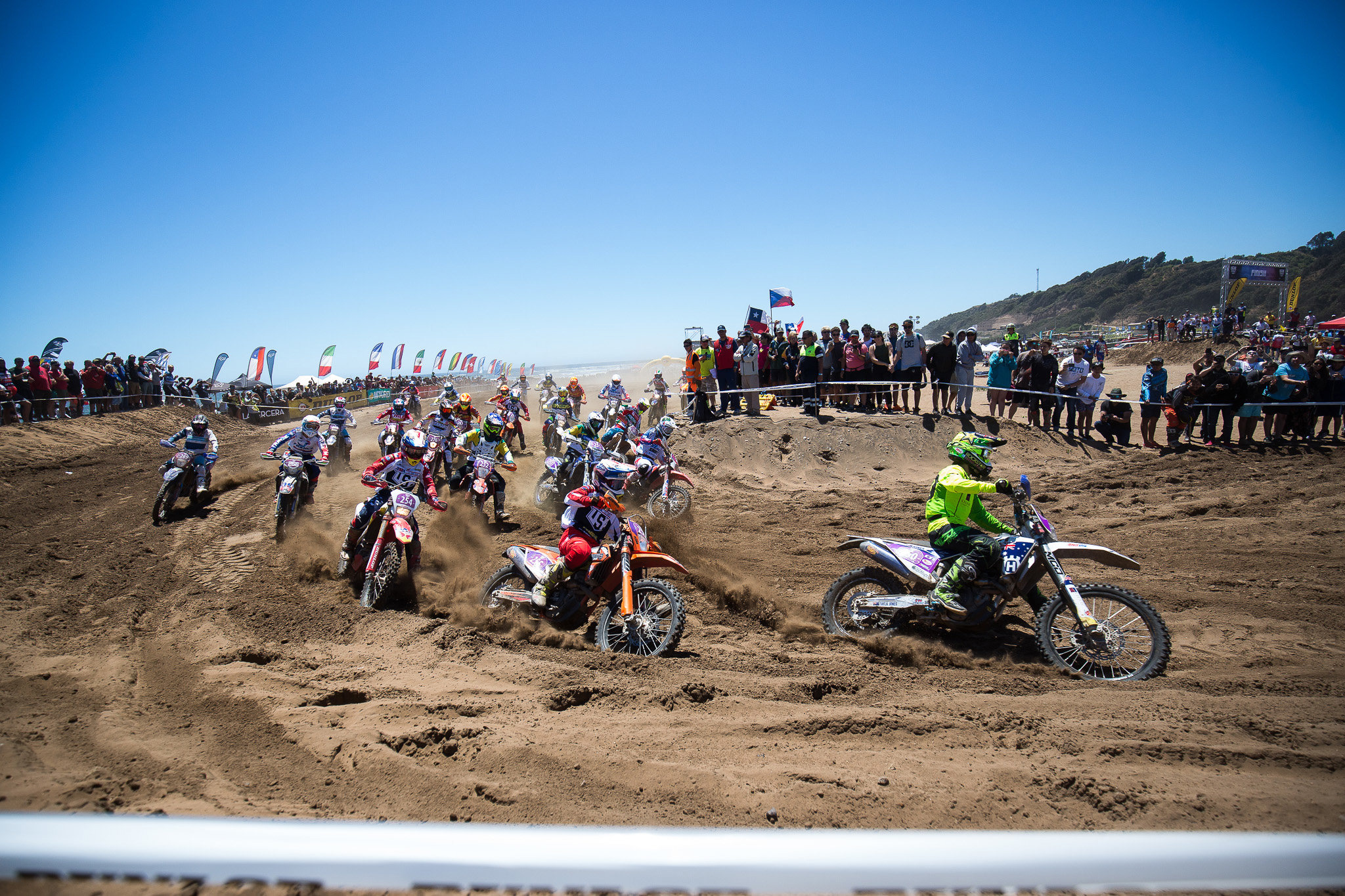 Tayla Jones leads the field into the final motocoss test of the 2018 ISDE. Photo: John Pearson Media
Leading the charge throughout the past six days, Tayla Jones is a world class veteran of the ISDE, and couldn‰Ûªt be happier with the results for 2018. Jones stated; ‰ÛÏit was a good six days! We had a strong team, we got some good times at the start of the week which really helped overall, and towards the end we stayed consistent which helped reduce the overall stress from the event. I‰Ûªm really happy to get a sixth consecutive title, which is a new record!

‰ÛÏI‰Ûªm also really honoured to get the overall championship! I have won once it before but there is no doubt that the second time is 10 times better.

‰ÛÏI would like to give a big thank you to the whole Australian team, the supporters, helpers and volunteers - we couldn‰Ûªt have done it without them. I would also like to thank the whole Women‰Ûªs World Trophy Team, Mackenzie and Jess, they‰Ûªre great teammates.

‰ÛÏI would also like to thank all my supporters and sponsors back home, and everyone who made this possible!‰Û 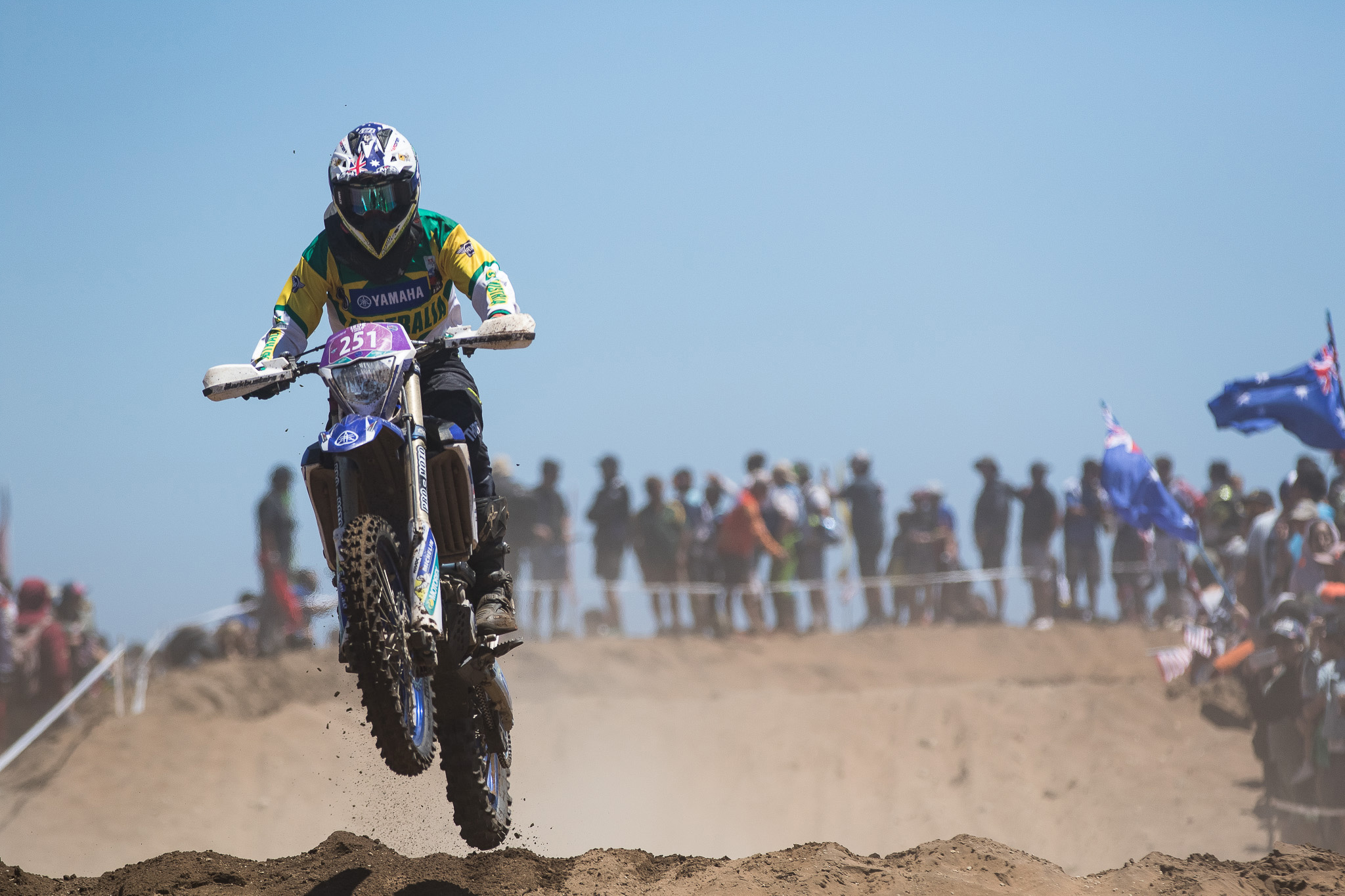 ‰ÛÏIt‰Ûªs not every day that Aussies are six-time World Champions, it takes a lot of consistency and hard work. I couldn‰Ûªt be happier have ridden with Mackenzie and Tayla, they‰Ûªre great teammates and they‰Ûªve made it a lot of fun all week!‰Û 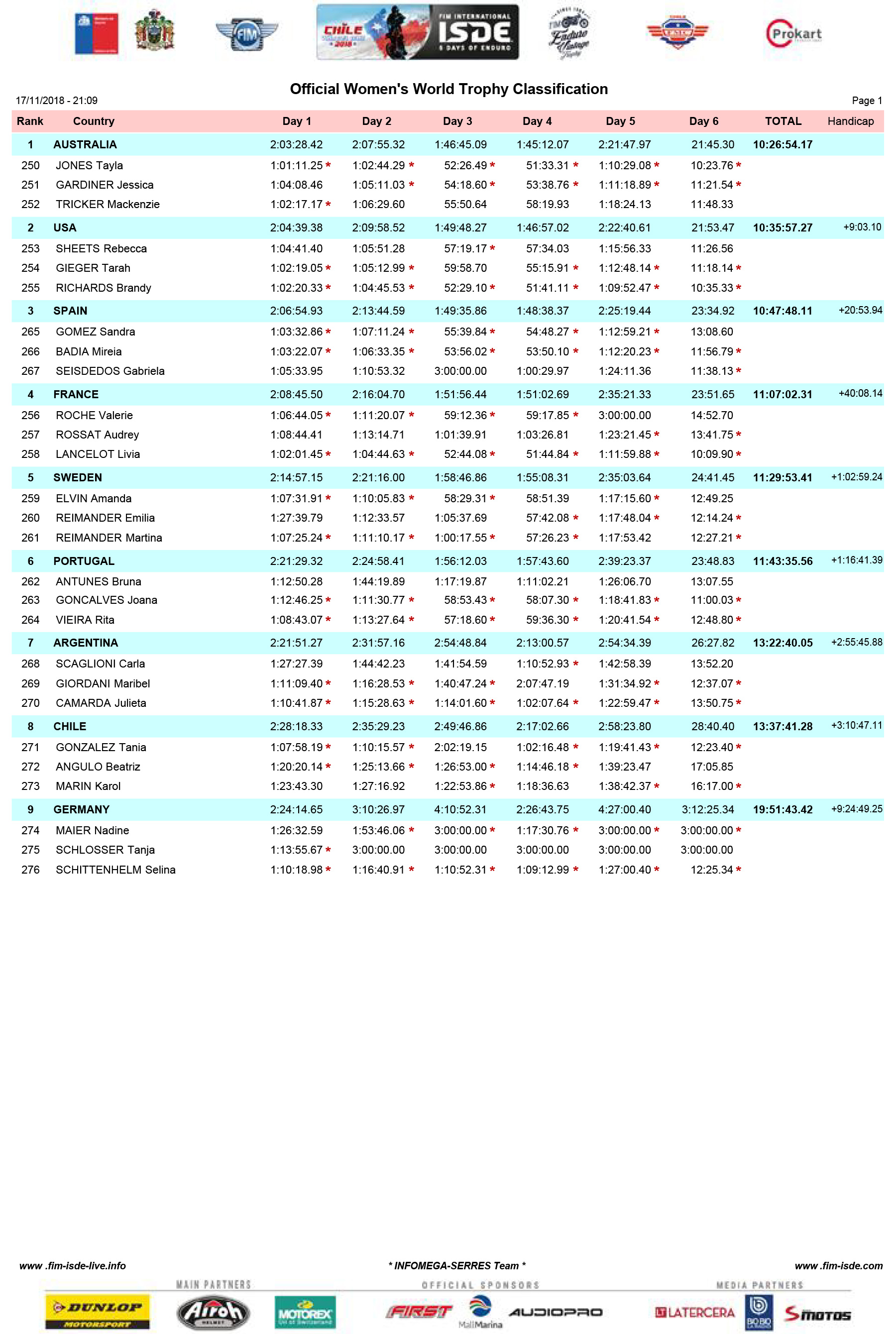