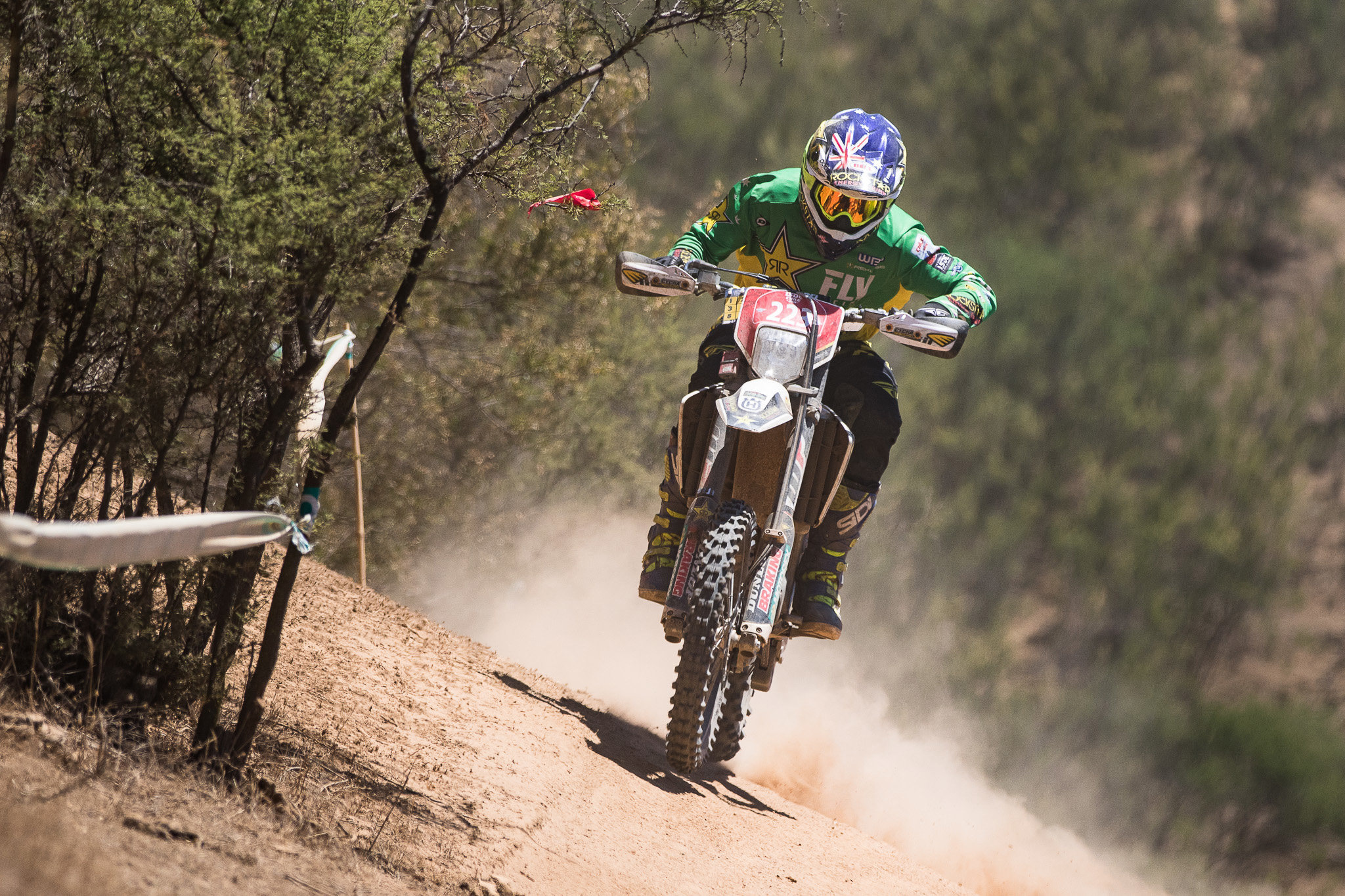 Josh Strang. Photo: John Pearson Media
The completion of day five of the 2018 FIM International Six Days Enduro (ISDE) marks the final day of Enduro based courses and tests, with riders heading into day six to tackle a Motocross style course and tests.

Wrapping up the penultimate day for the ISDE, competitors faced all new conditions, navigating a forestry course located at Penuelas Lake and Wood.

Team Australia remained steadfast in their goals for the second last day, gaining further ground to secure both the World Trophy Team and the Women‰Ûªs World Trophy Team into first place as they head in the sixth and final day of the ISDE. The Junior World Trophy Team again proved to our international counterparts that the Australian upcoming talent in Enduro racing is nothing short of impressive, as they held onto their position in fifth place overall.


The Australian World Trophy Team produced another spectacular day, showcasing our world class riders on a highly prestigious international stage, increasing their lead ahead of Team USA by just under seven and a half minutes. Trailing Australia and USA is Italy, France and Spain respectively, with Spain rounding out the top five following Australia by just over 20 minutes.

Daniel Milner was the one to beat coming into the ISDE, but he remains untouchable with another consecutive win, scoring a fastest time of 59:59.20. Coming into the final test tomorrow, Milner has an iron fist hold on first place overall, ahead of Taylor Robert from Team USA, by shy of one and a half minutes. Clocking the second fastest time for Team Australia in day five of 1:00:42.98 was Daniel Sanders, who continues to sit comfortable in third podium position overall. Rounding out Australia‰Ûªs World Trophy Team was Josh Strang, who scored a fastest time of 1:01:50.71, and now sits at 10th position overall. The sportsmanship and collaborative team effort that Australia‰Ûªs World Trophy Team continues to display is immensely impressive, as they remain positive and supportive of one another with the clear goal of bringing the World Trophy ‰ÛÏdown under‰Û 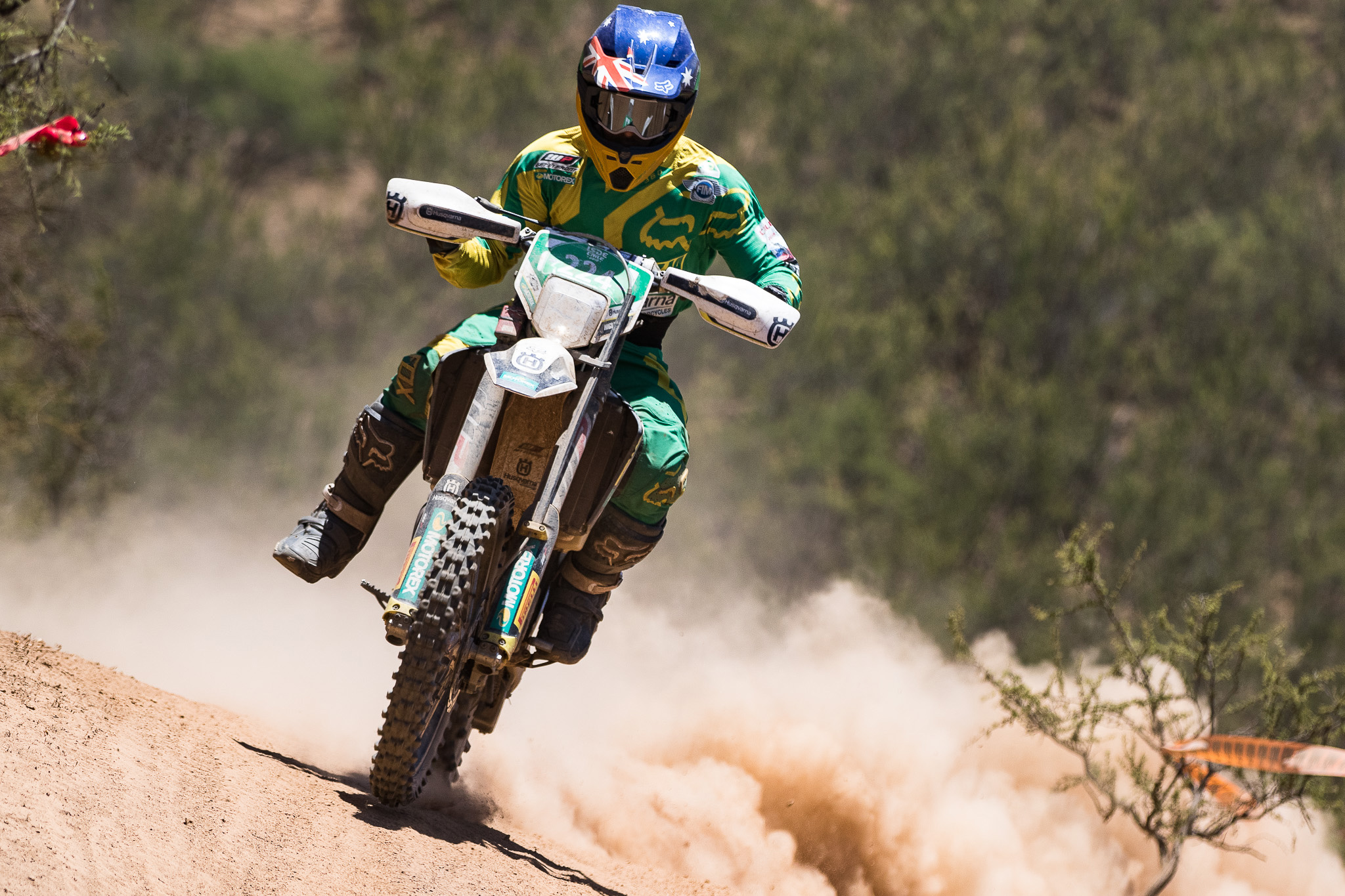 Daniel Sanders. Photo: John Pearson Media
With the homestretch well and truly in their sights, Milner reflected in today‰Ûªs results, stating; ‰ÛÏthere were two new tests today and I had to try and memorise the first test whilst moving through it, which ended up being a struggle! Although I essentially guessed a lot of it, I ended up being 10 seconds ahead of everyone else, which was fantastic!

‰ÛÏThankfully we had already walked through the second test last week, so I was much more comfortable walking into it knowing full well which sections were tricky and the points where I could quicken the pace. After completing the tests, I found myself changing into cruise mode and lost a bit of time, but overall I still won the day by 28 seconds!

‰ÛÏThe team is killing it! We‰Ûªve put some more time on Team USA, so all in all its been a good day for me and the team.‰Û 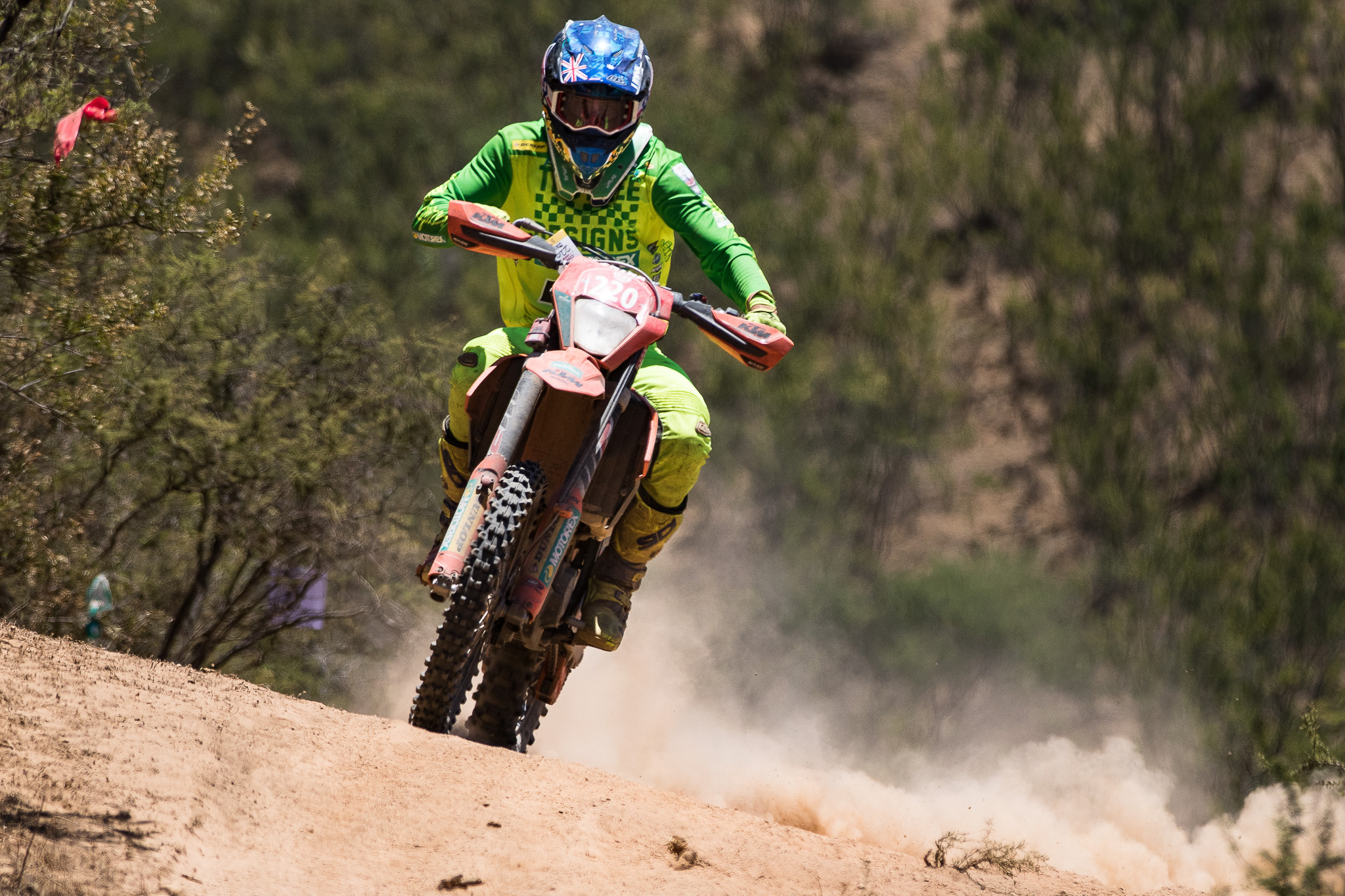 Daniel Milner. Photo: John Pearson Media
Producing a massive near nine-minute divide from Team USA in second place, day five didn‰Ûªt seem to phase our three ladies as they navigated their way through the new forestry course. With Australia in first place and USA in second, they are followed by Spain, Sweden and Portugal respectively.

For the fifth consecutive day, Tayla Jones has dominated the tests and course to clock in the fastest time for the team of 1:10:29.08 and continues to cement her name in history as she remains in first place overall, ahead of Team USA‰Ûªs Brandy Richards. Jessica Gardiner came in hot after Jones to nab the team‰Ûªs second fastest time of 1:11:18.89, now sitting pretty in fourth position overall. Debutante Mackenzie Tricker had a challenging day tackling the new forestry conditions mixed in with the stifling Chilean heat, however based on her sheer perseverance and dedication she has moved on up to 8th position overall.

Turning to our Australian Junior World Trophy Team, Australia continues to sit comfortably in fifth position, behind Chile in fourth place, who gained ground ahead of Australia by just under 12 minutes. Leading the class is Italy, followed by USA and France. Based on the perseverance of our juniors, we remain ahead of Sweden in sixth position, by roughly 14 minutes! 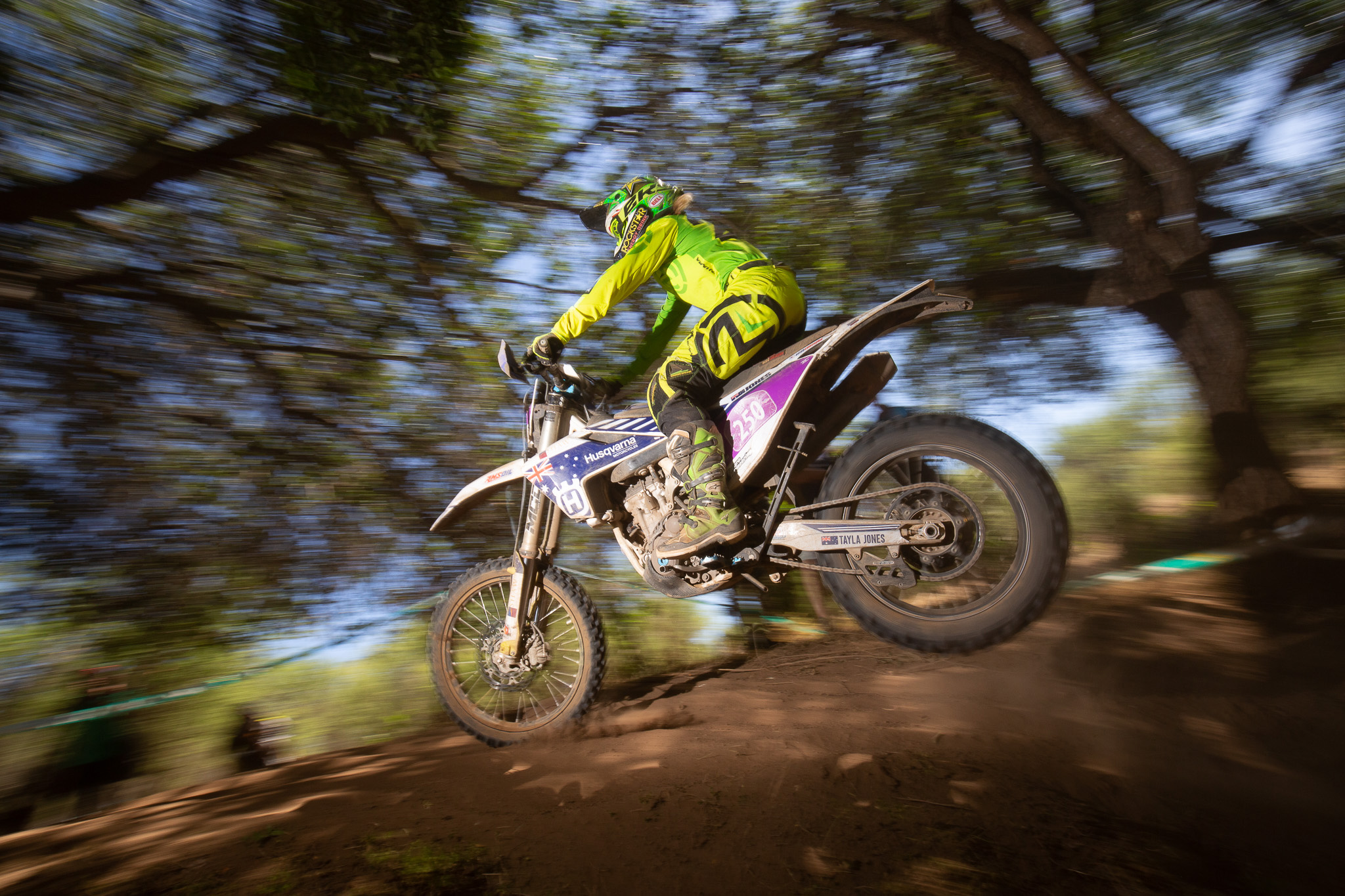 Leading the charge for the Australian juniors today, Higlett reviewed today‰Ûªs fantastic efforts from all three members individually and collaboratively, stating; ‰ÛÏit was a pretty good day for me. I managed to hold it together for the final Enduro day, and I‰Ûªm really looking forward to the motocross day tomorrow.

‰ÛÏThe team is going well, and all the results are really consistent, so we‰Ûªll see how everything pans out tomorrow!‰Û 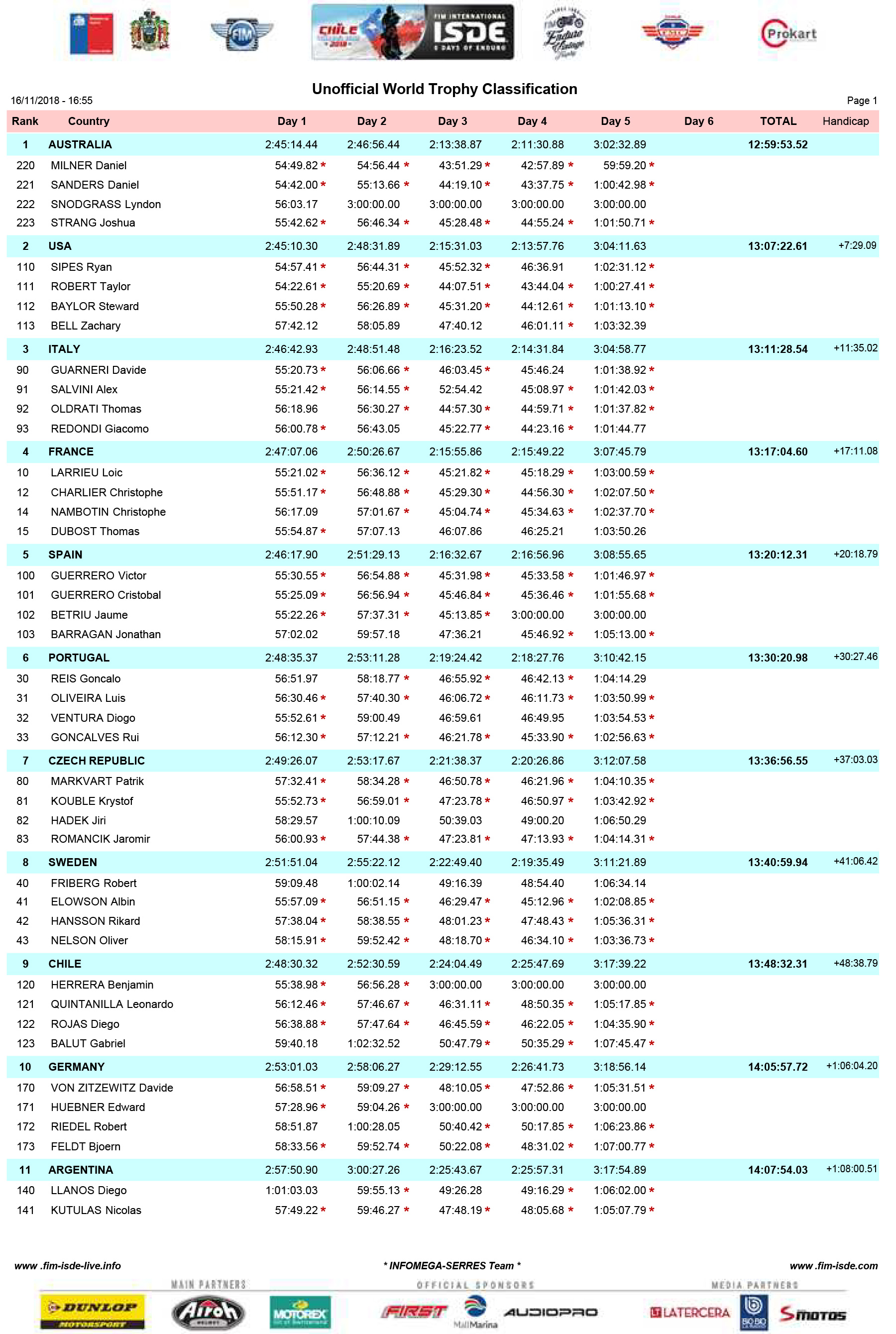 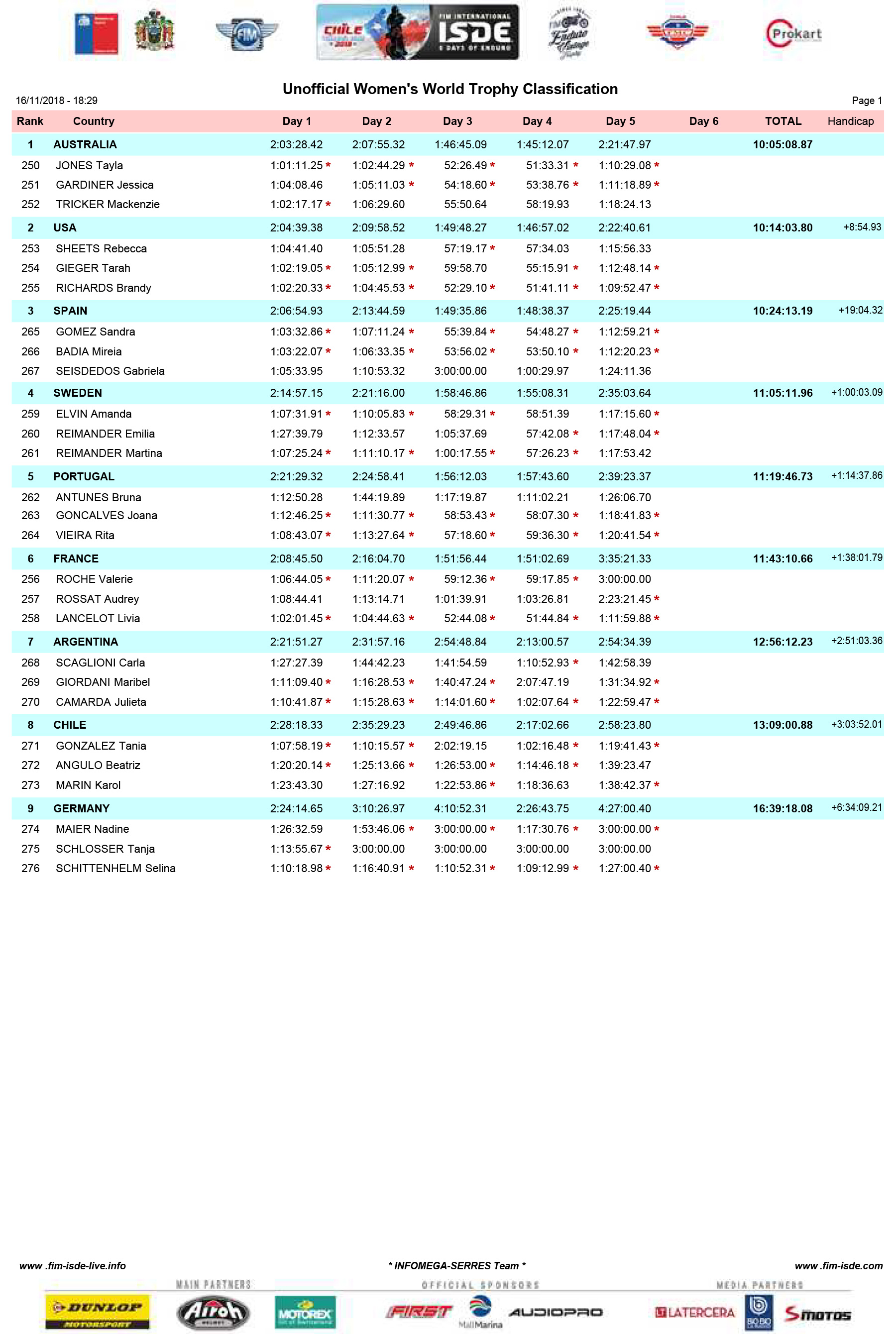 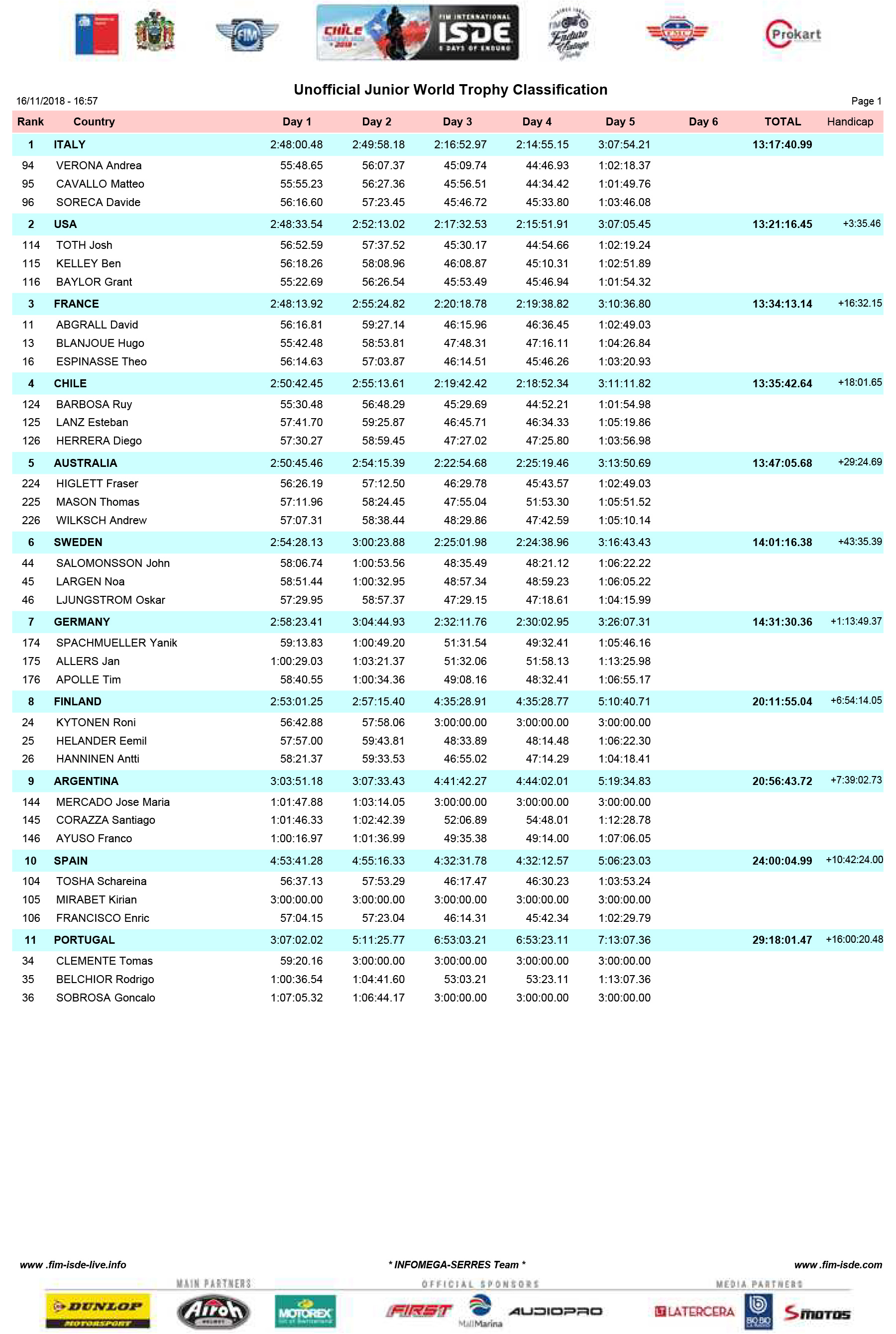