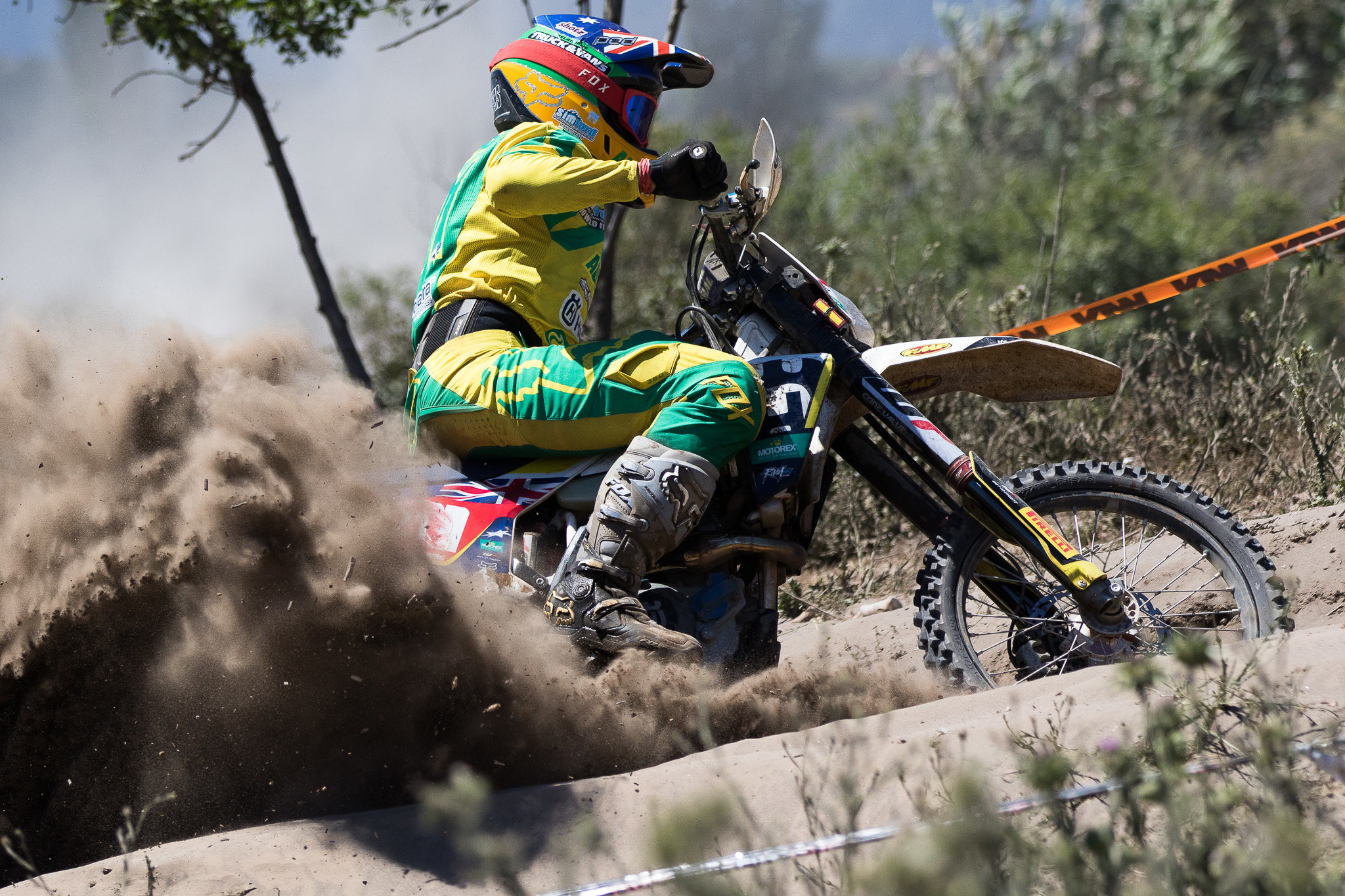 Day four took our riders across the same 150-kilometre course and special tests as day three, delivering competitors with a rocky terrain that proved another long and demanding day in the saddle.


Day four for the Australian World Trophy Team was nothing short of spectacular, as the increased their lead over Team USA to just shy of six minutes! The team effort has ensured Australia remains in first position, which sets exciting precedent as we move into the final two days!

Behind Australia sits USA, Italy, France and Spain respectively, with Spain trailing behind Australia by just under 14 minutes. Australia‰Ûªs fastest time was once again scored by Daniel Milner, of 42:57.89, who continues to comfortably remain in first position overall. Daniel Sanders came in hot after Milner with a fastest time of 43:37.75, and has now moved into second place overall, knocking Team USA‰Ûªs Taylor Roberts off his perch. 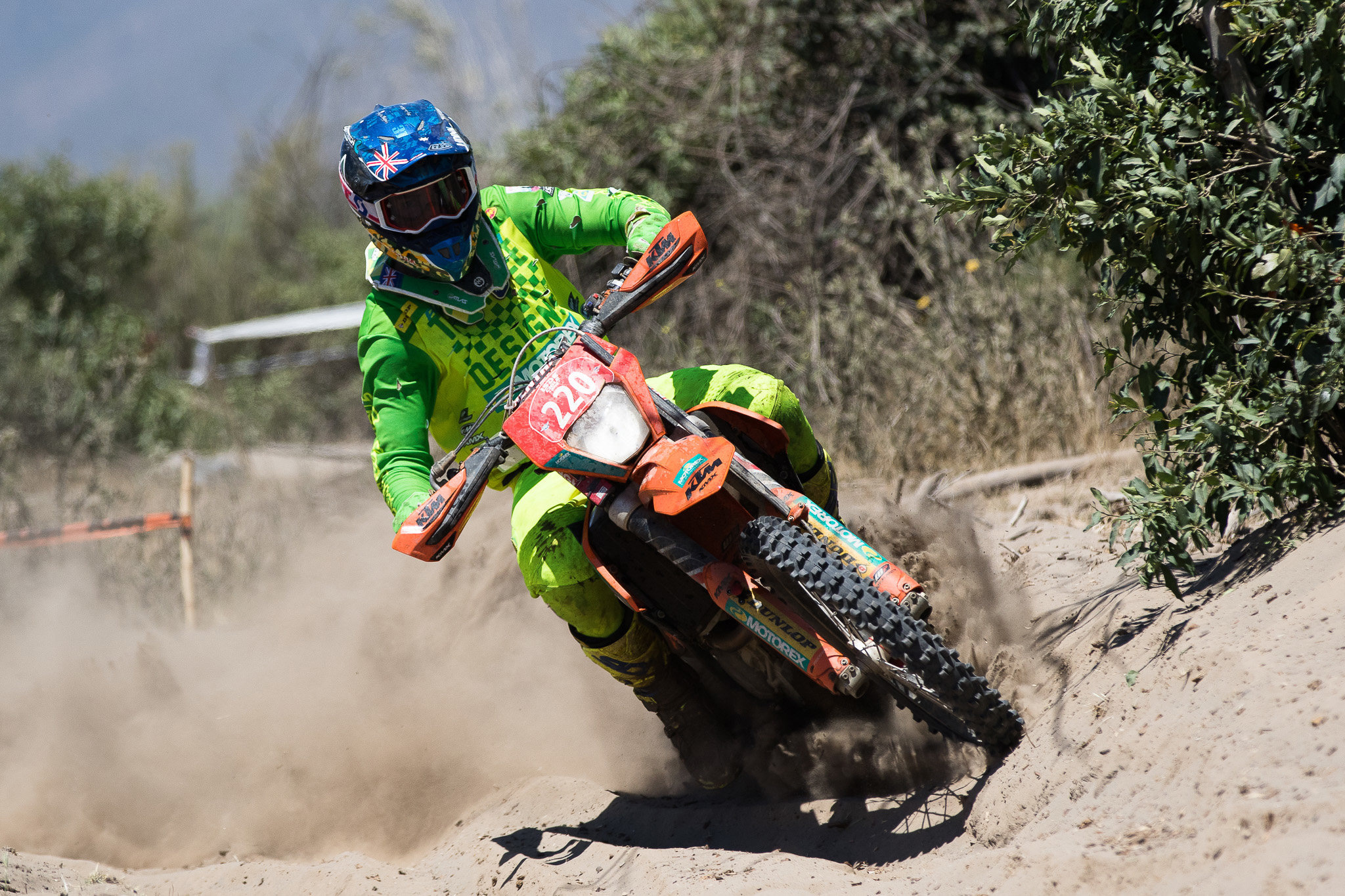 Daniel Milner. Photo: John Pearson Media
Josh Strang once again rounded out the World Trophy Team‰Ûªs immense efforts in the Chilean heat, clocking a fastest time of 44:55.24, which has accordingly secured his position at 10th overall. Based on the individual and collaborative team efforts in day four, Australia‰Ûªs full team are now all in the top 10 overall!

Looking to our fifth consecutive winners, the Australian Women‰Ûªs World Trophy Team, day four was another fantastic day that proved just how skilled our three ladies are as they hold the lead for a fourth consecutive day. Team Australia now leads the class ahead of Team USA by eight minutes, with Spain, France and Sweden following thereafter to round out the top five overall.

Tayla Jones lead the charge for Team Australia in day four, clocking in a fastest time of 51:33.31, which further cements her first-place position overall ahead of Team USA‰Ûªs Brandy Richards. Jessica Gardiner scored the second fastest time for the team of 53:38.76, however due to the tough conditions and the heat of riders including Brandy Richards and Livia Lancelot, Gardiner has moved to fourth position overall. Mackenzie Tricker had a challenging day today as she navigated the rocky terrain alongside the stifling heat and blinding dust, moving from seventh to 12th position overall.

Reflecting on today‰Ûªs course and special tests, Tayla Jones noted; ‰ÛÏday four was pretty good! I had a couple of crashes which took up a bit of time, but I made up all the hills which I‰Ûªm happy about. The rock test got rough really quick though, so I struggled to manage that test. Overall though today was another good day, I got another day win and the team made up more time which I‰Ûªm absolutely stoked about! Hopefully we can keep it up tomorrow and stay safe!‰Û 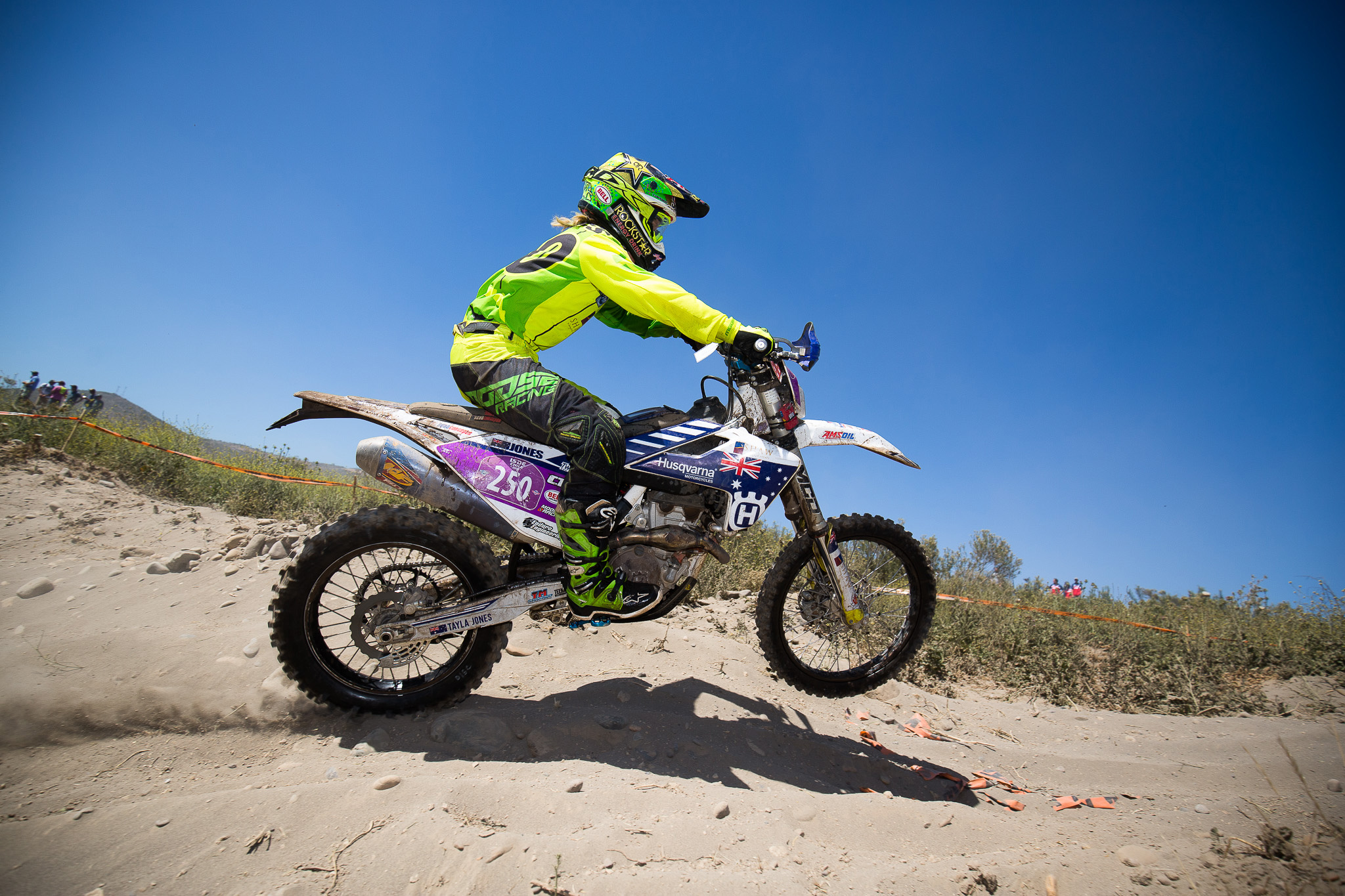 Tayla Jones. Photo: John Pearson Media
Turning the Australian Junior World Trophy Team, day four proved to be another fantastic display of our upcoming Australian Enduro talent as Team Australia continues to hold their fifth-place position. Chile continues to sit in fourth position ahead of Australia and gained further ground during the day‰Ûªs course and tests, leading by just under 10 minutes. The class is currently lead by Italy in first place, then followed by USA and France in second and third.

Fraser Higlett once again lead the charge for Australia in day four, clocking in a fastest time of 45:43.57, and now made a massive jump in the overall leader board to 23rd place! Andrew Wilksch scored the second fastest time for Australia of 47:42.59, and has moved into the top 50 overall, scoring 46th position. Rounding out Australia‰Ûªs impressive efforts in day four was Thomas Mason, with a fastest time of 51:53.30, who now sits at 70th position overall. Mason‰Ûªs efforts in tackling today‰Ûªs course and tests reflects the punishing conditions experienced in day three and four and the clear mindset all riders need as they face each day‰Ûªs challenges. 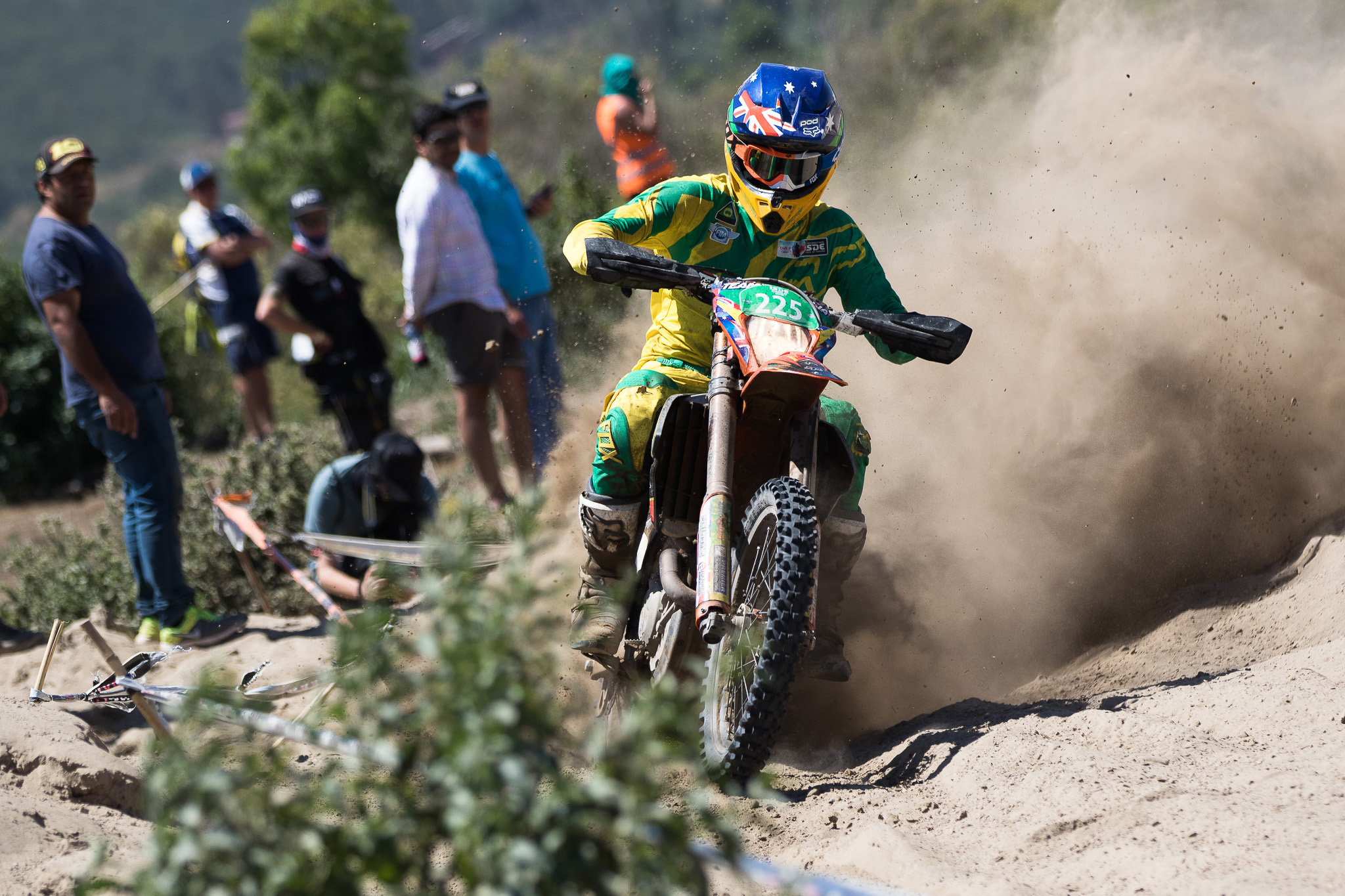 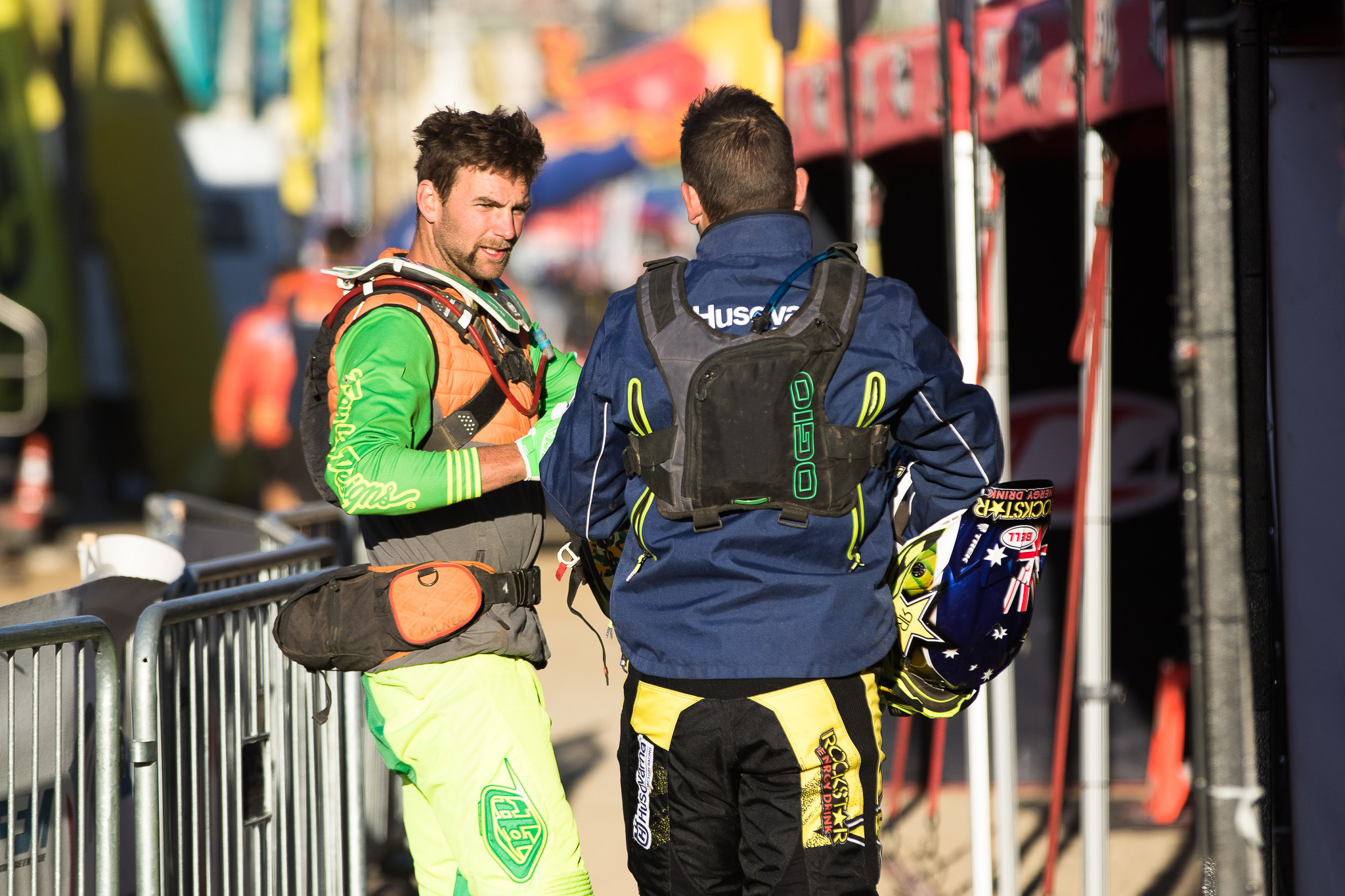