2018 American Motocross Championship Gets Underway This Weekend At Hangtown 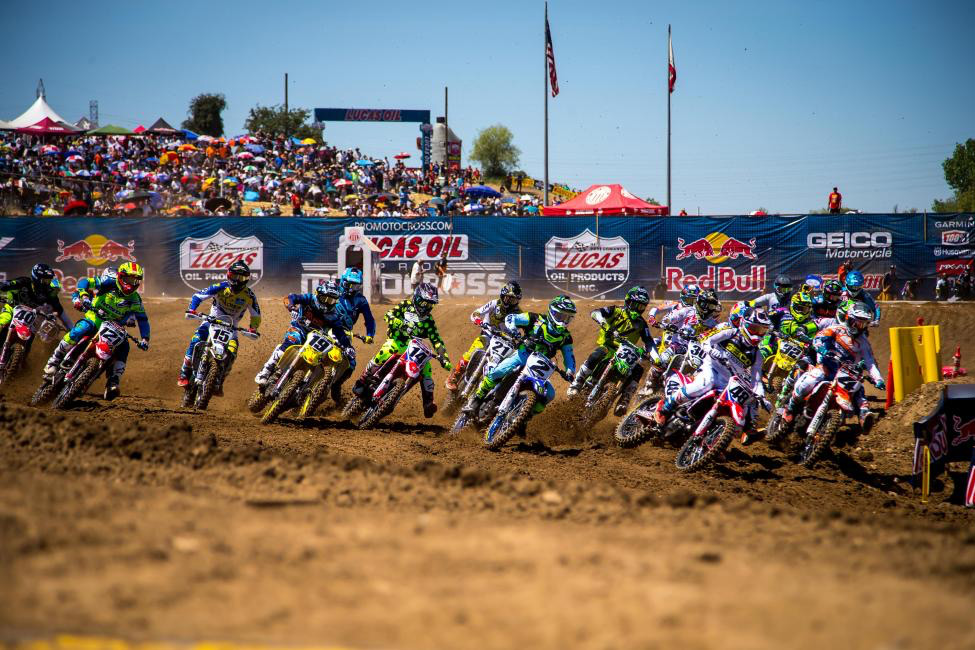 This Saturday, May 19, the 47th season of the world's most prestigious championship will kick off with the longest running event in American motocross, the Red Bull Hangtown Motocross Classic. The 2018 season will signify the 50th running of this iconic event, which fittingly serves as the opening round of what will be 12 grueling summer weekends of world-class competition amongst the most talented riders on the planet.

Headlining the storylines entering the 2018 season is the title defense of Monster Energy Kawasaki's Eli Tomac in the premier 450 Class. After he emerged as a true star in the making back in 2015, Tomac was able to achieve his lifelong goal of becoming AMA National Champion last season following a dramatic summer filled with ups and downs.

Ever since his history-making pro debut at the Hangtown Classic in 2010, the racing world has watched Tomac's ascension into becoming arguably the biggest motocross star on the planet. With a title under his belt, Tomac's will now look to become the first rider to successfully defend the No.1 plate since "The G.O.A.T." Ricky Carmichael did so during his seven-year reign of dominance that ended more than a decade ago in 2006. 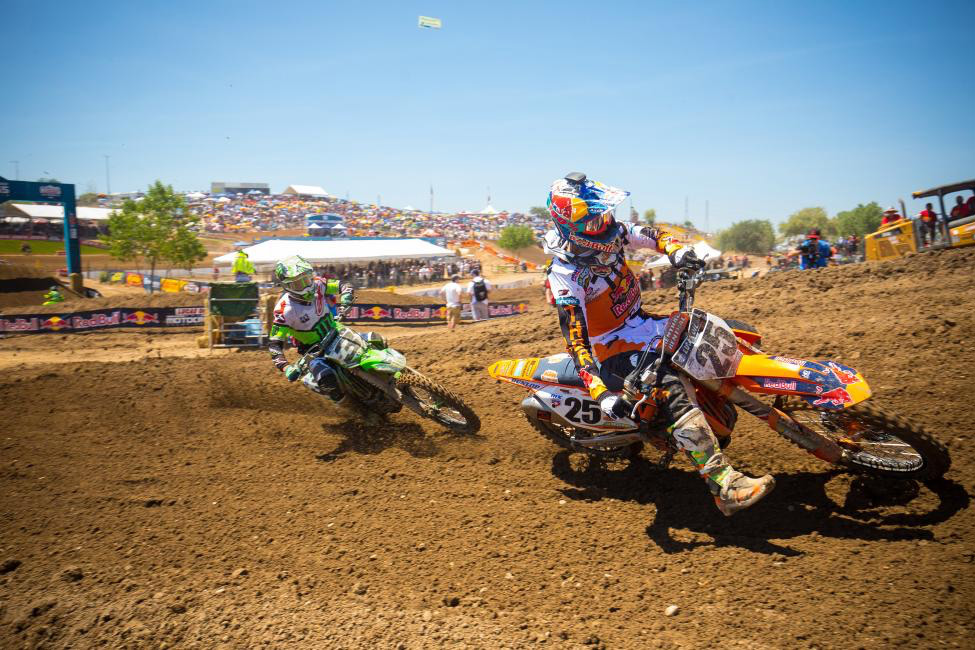 Will Musquin (25) and defending champion Tomac (3) pick up where they left off last season in the battle for the 450 Class title? - Jeff Kardas
Last season's path to the championship was by no means easy for Tomac, and this year he's poised to receive even more pressure from his rivals. Last year's championship runner-up Marvin Musquin and his Team Red Bull KTM Factory Racing effort are more determined than ever to claim the title that slipped from their grasp one year ago, while RMATV/MC-WPS-KTM's Blake Baggett is surely going to build off the breakout season he enjoyed last summer.

Fresh off capturing the first national title of his career just a couple weeks ago, the coveted AMA Supercross Championship, Rockstar Energy Husqvarna Factory Racing's Jason Anderson is perhaps bringing more momentum than any other rider into Hangtown. While Anderson is still in search of his first Pro Motocross victory, his confidence has never been higher.

Rounding out a star-studded list of serious contenders is two-time 450 Class Champion Ken Roczen. The past two years have been hard on the young German, to say the least, but there isn't a rider fans are more looking forward to making his return to the Nationals than the Team Honda HRC rider.

The battle for the 250 Class championship appears destined to be a convergence of veteran experience and youthful excitement. Reigning champion Zach Osborne has continued his winning ways thus far in the 2018 season for Rockstar Energy Husqvarna Factory Racing, and he'll line up on the gate on Saturday to defend his title as one of the most favored riders in recent memory.

While his time at the top of the division is still in its infancy, Osborne's wealth of experience in the division is unrivaled, and it's why many believe the path to the 250 Class title will run through him. Complementing Osborne's veteran status in the division is GEICO Honda's Jeremy Martin, the only other former champion in the class. Martin's back-to-back titles in 2014 and 2015 didn't come by accident and after a full year aboard the Honda he looks ready to get back to the level that made him a champion.

In addition to Osborne and Martin, perennial title contenders like Alex Martin (Troy Lee Designs/Red Bull/KTM) and Joey Savatgy (Monster Energy/Pro Circuit/Kawasaki) are sure to be a factor in the battle for victory week in and week out. 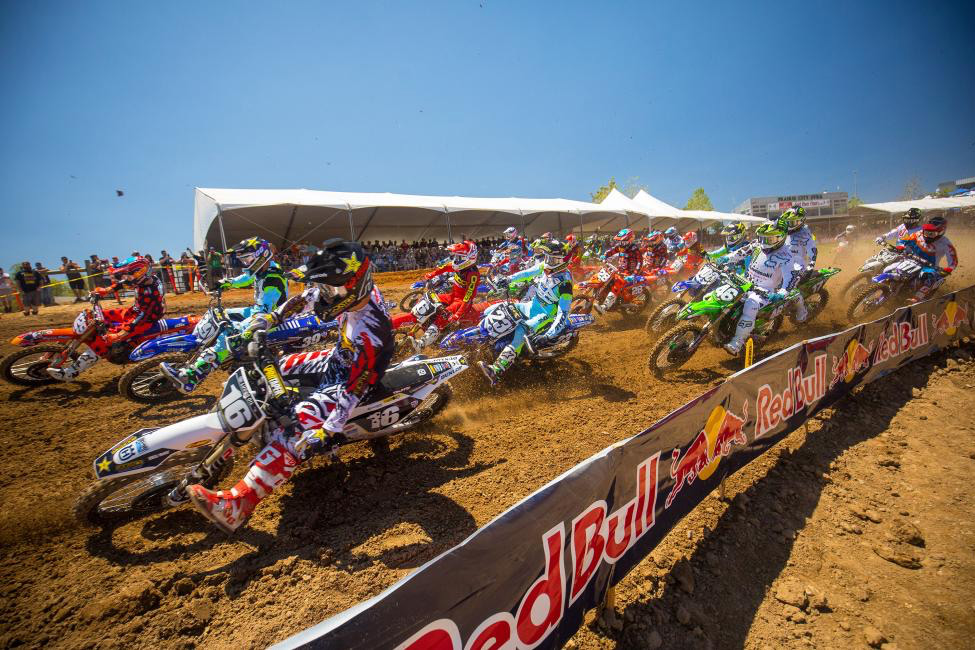 The 2018 Lucas Oil Pro Motocross Championship kicks off Saturday with the 50th running of the Red Bull Hangtown Motocross Classic. - Rich Shepherd
While the more well traveled competitors in the 250 Class enter Hangtown with a bit of a leg up on their younger rivals, the rising stars of the division will show no signs of intimidation in their quest for a championship.

With each passing season Monster Energy/Yamalube/Star/Yamaha rider Aaron Plessinger appears destined to be a champion. The second-generation racer possesses a unique skillset that stands out from his fellow competitors, and now that he's earned his first professional title as West Region 250SX Class Champion he'll be riding a wave of confidence into the summer.

Monster Energy/Pro Circuit/Kawasaki's Austin Forkner was forced to miss the majority of Pro Motocross last season due to injury, but the Missouri native has shown flashes of brilliance throughout his young career and continues to develop into a consistent threat entering his third season.

In addition to Plessinger and Forkner, European import Dylan Ferrandis turned a lot of heads as a Pro Motocross rookie last summer for Monster Energy/Yamalube/Star/Yamaha, as did GEICO Honda's Chase Sexton, who enters Hangtown off an impressively solid supercross season. Collectively, the depth of the 250 Class is at an all-time high, and there's a potential to see a record number of different overall winners over the course of 12 rounds.

Australian fans will have a rider to cheer on all season long with Hayden Mellross signing on with the Rockriver Yamaha team to contest the outdoor season in the 250 class.

While the stars of the 450 Class and 250 Class will share the spotlight on Saturday afternoon in California's capital city, the celebration of the landmark 50th Hangtown Motocross Classic will also include the opening round of the new 125cc All-Star Series.

The sound of two-strokes is returning to American motocross with a nine-round support series that will feature eight qualifiers and a finale at the season-ending Ironman National on August 25. Notably for Hangtown, five-time Pro Motocross Champion and future Hall of Famer Ryan Villopoto will compete aboard a factory-tuned Yamaha.