2017 MXGP Awards made at Matterley Basin 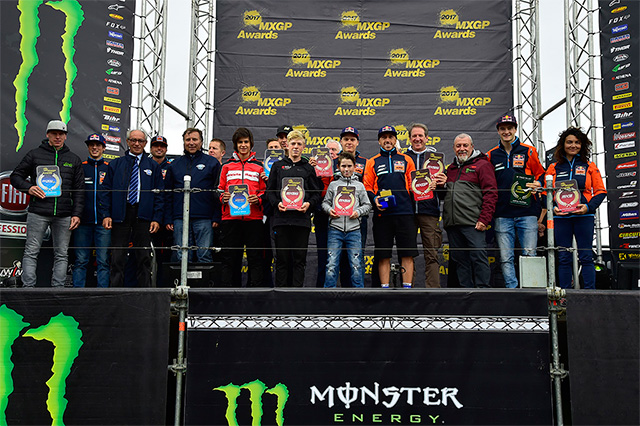 Today the best motocross riders in the world joined by some of the biggest names, brands, and organizers of the 2017 season at the Matterley Basin circuit, venue of the 2017 Monster Energy FIM Motocross of Nations presented by Fiat Professional, for the 2017 MXGP Awards.

This year‰Ûªs awards ceremony was held behind the circuit‰Ûªs new start on the Podium and Skybox structure, hosted by MXGP Presenters Paul Malin and Lisa Leyland then broadcasted live to everyone worldwide via Facebook and MXGP-TV. Youthstream President Giuseppe Luongo and FIM President Vito Ippolito were on hand to present the awards to the 2017 FIM Motocross World Champions Antonio Cairoli and Pauls Jonass, in addition to the industry award winners.

On the podium came SEL CEO Pier Carlo Bottero as he awarded the Journalist of the year, Frank Van Hoydonck, Photographer of the year, Takuro Nagami, and the best digital platform, OTOR (On Track Off Road) accepted by Adam Wheeler. Then Mr. Luongo awarded the MX2 Rookie, Jorge Prado Garcia, the Jan de Groot award, an award that honors the most promising young talent.

Youthstream also donated ‰âÂ10,000 to the Wings for Life charity every year and this year the cheque was collected on behalf of the foundation by Valentina Ragni.

To wrap up the awards Antonio Cairoli and Pauls Jonass rode through the crowd and up to the start straight to the podium on the Fiat Professional FULLBACK. Both were brought on stage and each collected their World Champion Awards including championship rings and Tag Heuer watches.

The final award of the day, the lifetime career award, came later at the MXGP Awards Gala dinner in the VIP Hospitality of Matterley Basin and it was awarded to Broc Glover.

Mechanic of the Year: Ryan Deckert

Photographer of the year: Takuro Nagami