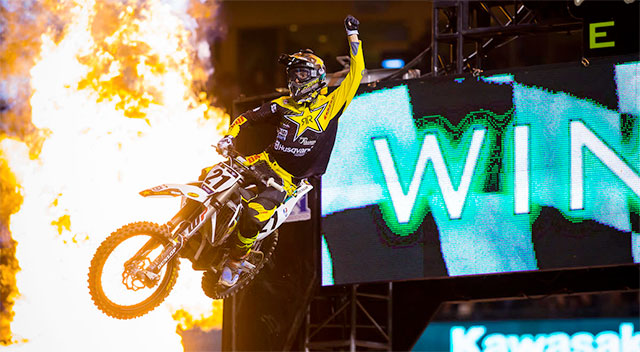 The 2017 season opener fittingly serves as the championship‰Ûªs most prestigious race, with a storied history in Anaheim that dates back to 1976.

This will be the 69th race held inside Angel Stadium, which has hosted more supercross races than any venue and serves as the proverbial home of the sport. It has been the site of the opening round in 27 seasons.

Anaheim has now hosted a stop of the championship for 37 of the 43 seasons in history, including the last 19 straight. It‰Ûªs also the only venue in the championship where all six competing manufacturers have won.

Sitting in the heart of Southern California, Angel Stadium is within an hour drive of the U.S. racing operations for all six competing manufacturers as well as the headquarters for title sponsor Monster Energy.

The first Anaheim season opener held for the 450SX Class was on January 31, 1981. Kent Howerton won on a Suzuki.

Of the 18 different Anaheim opener winners in history, seven were able to ultimately win the championship. Winning the opener has led to a title just nine times in 26 seasons (35%).

Ken Roczen will look to join Chad Reed and James Stewart as the only three-time Anaheim opener winners. If successful, Roczen will have earned his victories aboard three different brands.

Yamaha has the most Anaheim opener wins of any brand with nine. That accounts for nearly half of the brand‰Ûªs 20 all-time wins at Angel Stadium.

The first Anaheim season opener held for the 250SX Class was on January 18, 1986. Tyson Vohland won on a Kawasaki for his one and only career victory.

The 2017 season opener will be the 61st time the 250SX Class has competed in Anaheim, the most of any stadium in supercross history. Angel Stadium has hosted the opening round 21 times.

The winner of the Anaheim season opener has gone on to win the Western Regional 250SX Class title just eight times in 21 seasons (39%).

A total of five riders have earned their first career victory by winning the Anaheim season opener, but it‰Ûªs happened just once (Jessy Nelson in 2015) in the past 16 seasons.

In the 21 seasons that both the 250SX & 450SX classes have opened in Anaheim just one rider has been able to claim a win in each division ‰ÛÒ Ryan Villopoto.