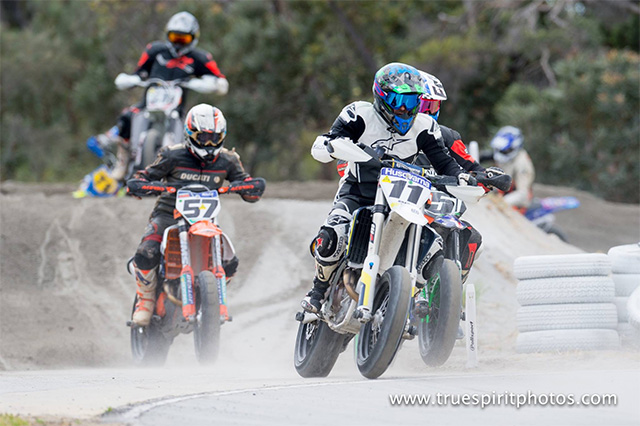 The 2017 Make Smoking History Australian Supermoto Championships were conducted over the weekend of the 18 & 19 November, determining the Supermoto Pro and Women Champions for 2017.

Hosted by Supermoto WA at Wanneroo International Kartway at Neerabup, Western Australia, the event was a great success and put on a thrilling show for all attendees.

In the Supermoto Open class, German superstar Marcus Class (125 points) had the perfect weekend to secure five wins on the trot. Andrew McLiesh (110 points) provided the greatest challenge to Class, finishing second in every race. Class managed to achieve comfortable margins in every race to earn a well-deserved Championship. Leigh Boujos (100 points) rounded out the top three, also managing to finish third in every single race.

The Supermoto Womens class was fantastic viewing for spectators and riders alike. There was no stopping last year‰Ûªs champion, Jessica Boujos (125 points) who once again took a clean sweep. Stephany Kapilawi-James (102 points) finished on the podium multiple times to finish second in the points standings. Chelsea Blakers (97 points) finished second in the two final races to manage third overall. A total of 15 women over all classes, competed in the event.

Class (100 points) put on a true display of Supermoto talent by leading and winning all four races taking out the number one trophy and Australia‰Ûªs Supermoto PRO Championship. Andrew McLiesh (88 points), earned himself the second-place trophy, narrowly holding out the hard charging Luke Davis (80 points) who came third.

The Supermoto Veterans class was the Leigh Boujos (125 points) show, as he displayed just what it takes by dominating the Veteran‰Ûªs class, winning every race over the weekend. Bradley Trivett (108 points) displayed his true potential by taking out the second-place trophy, just ahead of Dean Taylor (98 points) in third place.

Jake Folini-Kearns (112 points) was the strongest rider in the Supermoto Clubman Class. Kearns rode superbly in the opening four races but slid down to sixth in the final. His results saw Kearns finish in front of Jamie Makin (96 points) and Michael McLiesh (95 points) in the final standings.

In the Postie Bike Challenge, Steven McQueen (125 points) once again showed his true talent to win all five races to the delight of the crowd. Ryan Woods (110 points) also showed consistency throughout the weekend by taking home second, just in front of a fast finishing Grant Roncevich (100 points).

Beau Erickson (119 points) was in strong form for the Mini Motard and took four out of five races. Erickson was just pipped to the finish line by Jarrad Woodland (116 points) in race five. Woodland and Ben Stevenson (88 points) completed top three in the points standings.

For the Supermoto Junior Lites, Ryan Moscardini (119 points) took three victories to secure the most points of the Junior Lites. Jethro Carriage (111 points) and Lucas Quinn (105 points) finished second and third respectively. All three Juniors managed to secure at least one victory.

Full results and times are available on the MyLaps Speedhive website.