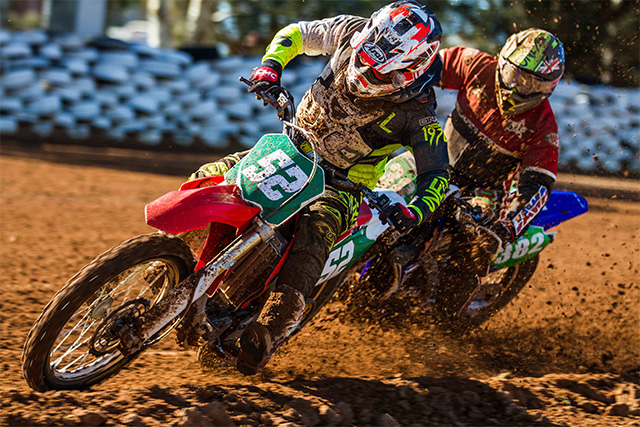 In clean, fast and furious racing demonstrated in all classes in the 2017 Australian Senior Dirt Track Championship held at Jamberoo park in Victoria, hosted by the North Western Victorian Motorcycle Club (NWVMCC).

Cold and frosty morning starts punctuated the two-day Championship before fining up allowing practice, heats, repechage and the main finals got underway in front of the crowd lined fences.

In the first time since 2004, the Slider 'up to' 500cc class made a triumphant return to the track and saw Jake Schneiders snatch two wins from two starts, closely followed behind by Jesse Davies in second place and class master Jason Stewart, third (still showing the young lads how it's done!) His son, Jordan, registered a fourth place finish with only three points separating the pair.

Pro Open class on Saturday had three riders tied on 50 points after two rounds on day one, being namely Nicholas Waters, Rowan Tegart and Kayden Downing, with closely following Damien Koppe on 47 points then Brad Burns and Daniel Wicks on 42. The Pro Open boasted an incredible 32 riders over the weekend at Jamberoo Park.

The Pro Open final didn‰Ûªt come without its spills, with young Max Whale on his first outing in an Australian Senior Title event. Whale attempted an unobtainable move on the competitor in front of him (Nicholas Waters) on the second last turn of the last lap, connecting with the rear wheel of Waters, bringing himself down in spectacular fashion.

The Pro 250 class on Saturday had Jarred Brook on first with two wins, Brad Burns behind with a win and a third placing and Nicholas Waters with two second places from two starts. The Pro 250cc class was again tipped as a huge final showdown on Sunday, where third and fourth positions were very tightly contested with Ty Lynch coming out the collector of third place. Jarrod Brook took the lead and was never challenged. 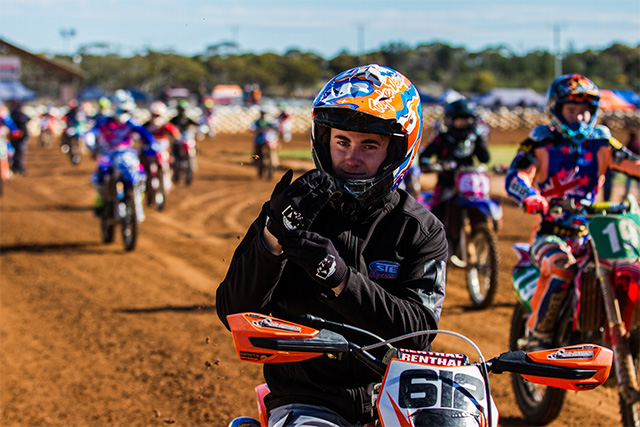 Saturday's Pro 450 class had Jarred Brook in first position with two wins, but Damien Koppe was sitting on the same points and was closely followed by Nicholas Waters on 47 points, tied with Kayden Downing - Ty Lynch on 45. The Final on Sunday saw Kayden Downing take the lead from the gate, and Jordan Dall fought hard to keep at him over the four laps. Jarred Brook crashed out on lap one, managing to remount and continue.

Under 19yrs featured fantastic racing with Max Whale convincingly taking hold of the class from Round 1 until the Final, when he had a coming together in the Pro Open class, putting him out for the rest of Round 5. Whales' points were strong enough to give him second placing in the Championship, Bailey Spencer taking honours, with local Cooper Riordan who normally races Speedway - rounding out the podium.

Saturday's MX Open had Ty Lynch on the top points after two heats, joining him in a tie was Nicholas Waters and Jordan Dall all on 47 points then closely followed by Rowan Tegart on 45. The MX Open final on Sunday didn‰Ûªt start without dramas off the line, with biffing and barging bringing out the red flag and a dressing down from Officials before the re-start. Jarrod Brook got the hole shot and wasn‰Ûªt contested for the four lap journey, the field behind swapping and changing positions until the chequered flag dropped.

Saturday's Pro Open Womens was hotly contested and tightly fought, with Briony Hendrickson from Queensland as the stand out perfomer, clenching two convincing wins that were followed by Grace Hudson and Amy Wedd on equal points. Brooke Lonie six points behind. On Sunday, the Womens class saw outstanding racing and were noticeably faster than last year.

The Junior 250cc Class featured as a support category, ensured tight racing with both Ned Faulkhead just coming back from a round of the Asia Talent Cup (Road Race last weekend in Indonesia), and Harrison Ryan from NSW pushing him in every round race, coming out on top with only three points between them both. Hamish McCarten really stepped it up for the weekend, bringing home third place after his success from the 2017 Junior Australian Track Championships held last month at the NWVMCC track.

Saturday's Over 35years class saw Jason Stewart running first, Mitch Wolfe trailing the leader, and Michael Rix in third with Jared Anskaitis on same points. Sunday's version of the Over 35years support category provided another great run of straight races. Jaons Stewart took home the glory and clearly had a ball along the way.

The 85cc 2 stroke/150cc 4 stroke support class, had Remmie Fyffe first, Damon Burke second and Zane Kinna third on day one. Local Chloe Ackerley and Oliver Dichiera also held their own on the track. On Sunday, riders put on a super show for the crowd at Jamberoo Park with each race, even managing to mix it up for the finish line honours.

The sidecars as always put on a great show for the audience, with Liebke/Liebke sitting in first at present with Fien/Jobling running in second position, closely followed by Grainger/Gaze and Pearce/Harrison that were only separated by one point ahead of the all-important A Final.

The Final heat on Sunday went as smoothly as possible, with the pairing of Adam and Graham Liebke from Queensland taking the win quite convincingly while the other competitors following a further full three seconds behind. 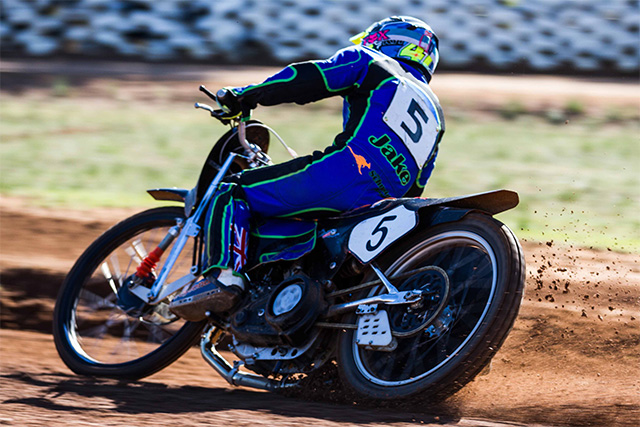